Midnight Fight Express is a 3D beat ’em up single-handedly programmed by one-man Polish powerhouse Jacob Dzwinel (albeit with a little help in the writing and music department).  It takes the classic brawler type of game and gives it a fairly unique perspective as it tells the story of a man, Babyface, once a gangster but now a vigilante who sets out to save the city from the fearsome gang he was once a part of.

Back in the day, the brawler was a staple of the arcades.  Games like Renegade, Double Dragon and Final Fight were all super-popular but the genre’s best days have been behind it for a long time.  Sure, you’ll get 2D beat ’em ups now and again hitting PSN thanks to various indie devs but few of these are notable, with only the likes of Castle Crashers, Streets of Rage 4 and Scott Pilgrim really generating much of a buzz in recent years. 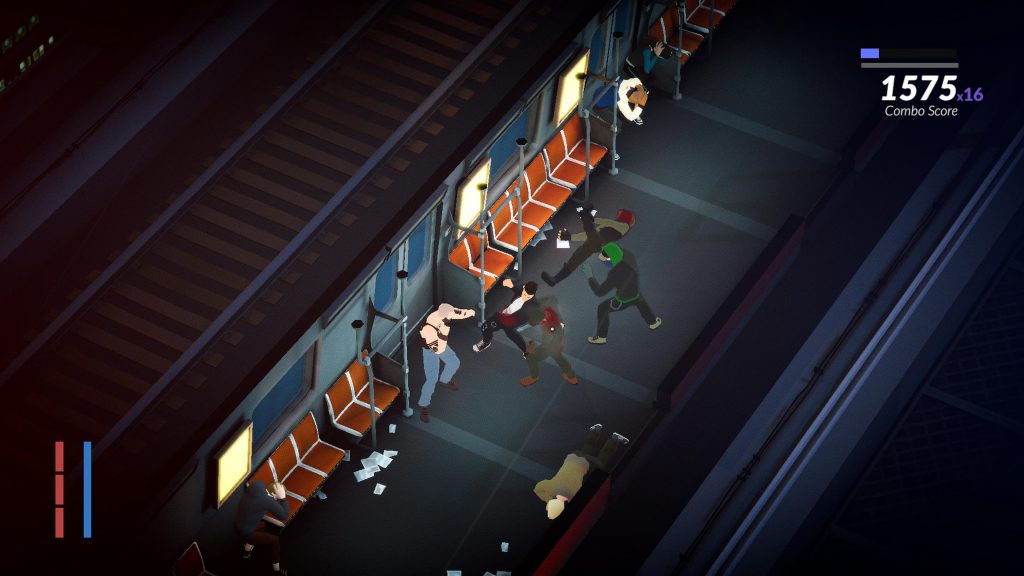 There have been occasional forays into 3D though and one of them really stands out.  Fighting Force felt very much like Final Fight but in 3D (Final Fight would indeed get a proper 3D sequel, Final Fight: Streetwise, but this proved unpopular with reviewers and gamers).  We loved Fighting Force.  It had the spirit of the old coin-ops but with a reasonably solid 3D engine and it combined solid brawling with some good weapons and great set-pieces.  However, we’ve not seen a ton of games like it over the years (there are plenty of 3D games with fighting in them, but not many where that is the focus).

Enter Midnight Fight Express.  This game opts for a tidy isometric viewpoint a’la Diablo and a clean, comic-like aesthetic and sets you to work against the gangs with a deep fighting system that is almost a little at odds with its arcade brawler inspirations.  After a quick tutorial that explains the basics of movement, attack and defense, you’re into the main game.

There are forty levels to fight your way through which sounds a lot.  Well, it is a lot.  But the levels are all quite short (some are very short) and so you’ll make good progress.  They’re set in all the usual brawling locations from streets to factories, bars, train stations and so on but the shortness of the levels means that you can be in one type of area for a while.  Like it felt as though a quarter of the game’s levels were in or around trains and train stations but there are some nice changes to mix things up and create set-pieces too. 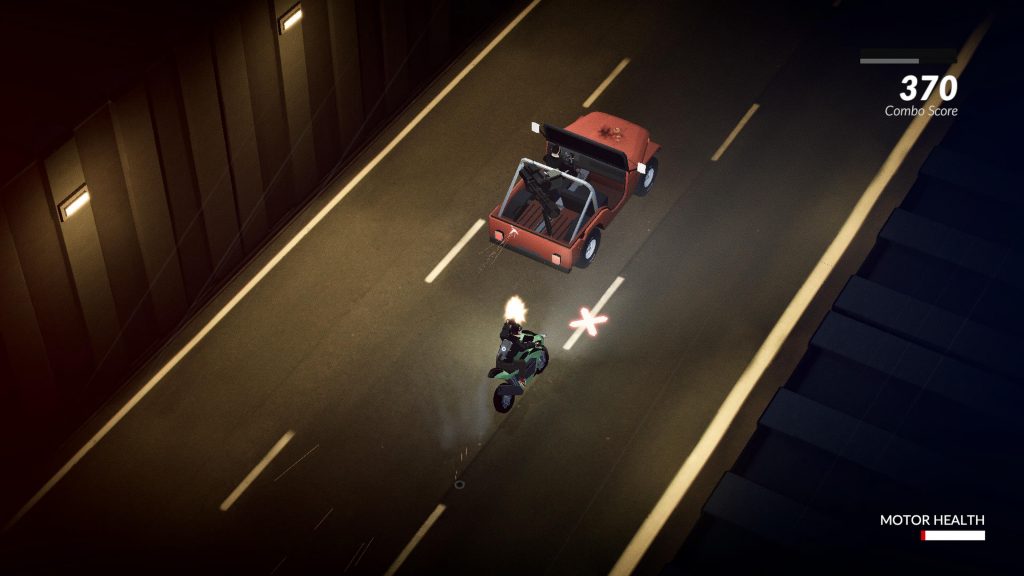 Each level introduces new enemies and these come with different abilities and weapons.  From basic gang members who take a few punches to grappler types who’ll grab hold of you, skilled fighters who’ll block your attacks, armed ones who can’t be blocked and so on, you’ll be constantly dealing with new threats.  From the varied fighting styles and weapons to the Warriors-esque gang characters, things change up rapidly and constantly so you’ll never get bored.

Along the way you’ll also have to deal with boss characters who up the ante in terms of difficulty and violence and so you’ll need to evolve as a fighter too.  Thankfully, between levels you’ll be able to upgrade your skills.  Fundamentals such as speed and punch power remain constant but you can add new techniques to improve your countering, grappling and so on.  Of course with such short levels, you’ll be learning a lot of new moves that you might not ever really commit to memory but you can practise them away from the main combat areas, so that’s good. 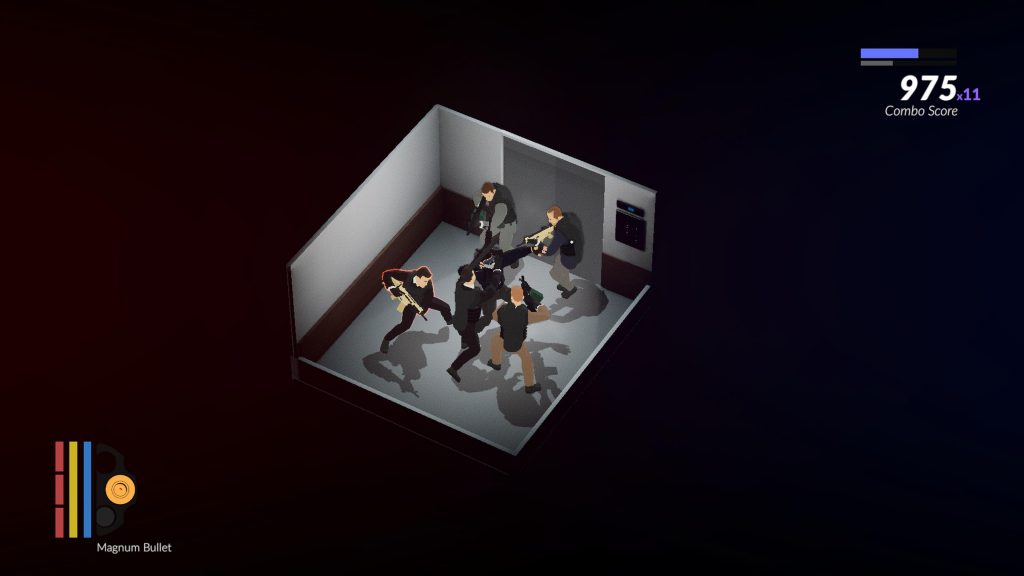 Between the decent story, interesting characters, deep and varied fighting and the occasional but welcome set-pieces, there’s a ton to like about Midnight Fight Express.  It’s very much a brawler in the old-school sense but it has enough of its own ideas and identities to actually feel pretty special.  Sure, there are some niggles such as the story being told silently via text and the shortness of the levels slightly ruining the flow of the game but apart from that the game does everything we’d want a retro-inspired modern beat ’em up to do.

The presentation also helps sell things nicely.  The isometric visuals are quite striking and there’s plenty of blood and gore on show to help sell the violence while the character designs and grim setting give the game a dark and deadly feel.  As we said, there is no voice acting but the soundtrack is absolutely banging and keeps the energy up even across the large number of stages. 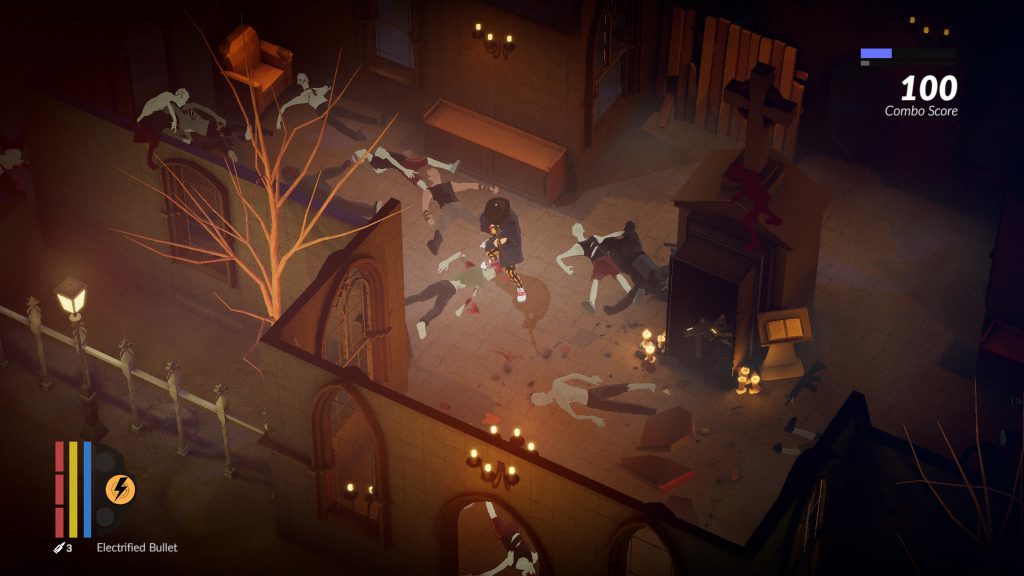 So while Fighting Force was always our favourite 3D brawler, we think that maybe Midnight Fight Express has taken its crown.  There’s just something very satisfying about running into a room full of armed guys and strategically taking them out in a way that lets you use their weapons against them in the most efficient and methodical way but also just going full ham when shit goes badly.  The game does get progressively more difficult also but we found that as it got harder, it got more interesting and helped sell Babyface as the feared killer in a way that just takes us back to all our favourite ’80s fight flicks.

Yep, Midnight Fight Express is a phenomenal take on a classic genre and has enough respect for its forefathers while having plenty of its own ideas and flair and is a game not to be missed.  At times we felt like John McClane storming Nakatomi Plaza, outnumbered, outgunned but not outmatched and by the time the story reached its conclusion we were more than satisfied.

Midnight Fight Express
9 Overall
Pros
+ Great, varied combat
+ Lots of techniques and moves to learn
+ Cool visual style
+ Banging soundtrack
Cons
- Short levels can interrupt the flow a bit
- No voice acting
Summary
Midnight Fight Express is the best 3D brawler since Fighting Force and we're loving it. Part Final Fight, part Die Hard this is a throwback to the games and films of the '80s but is a perfect example of taking nostalgic influences and making something modern, exciting and great with them.