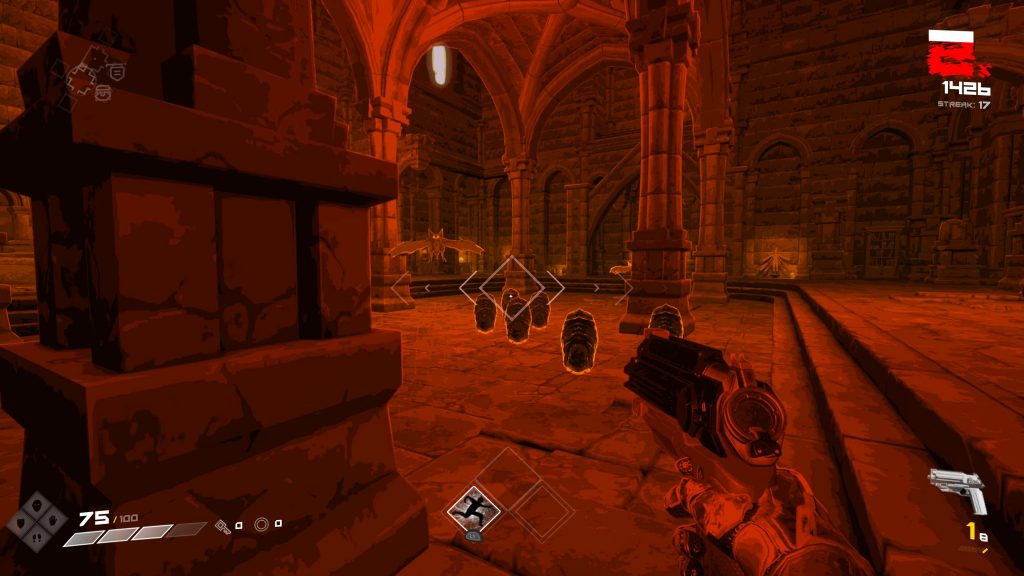 Sometimes, while I’m playing games, I wonder about what could work if the developers took their vision in another direction. This can range from the likes of wondering what the Starfox series would be like as a racer or Parappa the Rapper becoming the platform game it deserved to be (Songbird Symphony style, think about it). While I am just a lowly gamer that is in no position to be judging art choices or telling developers to make risky moves in a bid to please just me, I can’t help but wonder how cool it would be to see some games shift genre, even if just for a mode.

One such thought came over me while I was playing 2020’s Doom Eternal. Here was your classic styled FPS, with a heavy emphasis on juggling weaponry. Constantly moving to evade and open attacks, all while having your face melted by a blistering, Mick Gordon metal soundtrack. There were times when it genuinely felt that I was playing a rhythm action game, but instead of glowing button-coloured gems, I was eviscerating cacodemons or goring revenants. Ever since then, I have yearned for an experience like it, where the action of an FPS can be synced up with a soundtrack that reflected the urgency and chaotic nature of the danger in-game.

Which is the reason I was so thrilled to hear about BPM: Bullets Per Minute a game that feels like it was made for people like me. The kind of people that thought the above rhythm action Doom Eternal example could work, as it has parity with the idea while introducing some its own to the mix, with a varying degree of success. The question of utmost importance though, is whether this melding of genres works and whether it could be executed to the high level that I had set in my head. 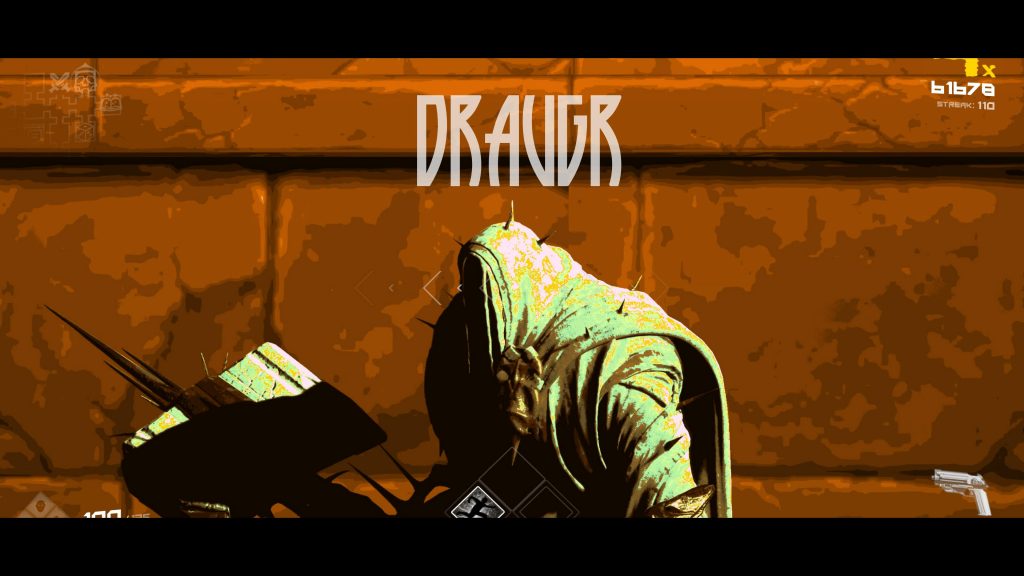 Developer Awe Interactive has pulled together a mash of ideas that all work with a satisfying degree of unity. With BPM, your guns can only fire and reload in time with the rhythm of the soundtrack, while enemy creatures and certain passive effects only trigger or attack on the beat. In addition, you can also find abilities and ultimates along the way which provide active or passive effects that help get you through the levels. Accompanying this rhythm action style with roguelike rules and you get something feels welcomingly familiar to fans of games like Crypt of the Necrodancer and the recent Returnal. Where failure is punished with a harsh fall back to the start and where picking up incremental upgrades is the order of the day.

As we are dealing with a Roguelike here, there are some trappings to consider. Usual rules apply. If you do not like games that are difficult from the off that take a while to click, this is not one for you. BPM is one of those games that takes time to get the feel for. The shooting is at first jarring and to get around the odd feeling takes a few goes and a bit of tweaking in the menu system to feel comfortable. This gets more complex as you begin to unlock new weapons and characters. Each with their own rules and playstyles. With heavier weapons only being usable every beat or half, requiring the player to feel each of them out before being of any use and alternate characters having movement options or attributes that will be great for some, or a burden to others.

In typical Roguelike fashion, everything in each run is randomly generated, from the placement of weapon pickups, enemy locations, and level themes being different each time you start BPM up. This obviously makes learning weapons difficult as you do not get the time you feel you need with them. At the same time, it is a real mixed bag as to whether you will get the beneficial abilities or pickups that you need to succeed. For example, while in games like Returnal or Risk of Rain 2 there are moments where the random generation can throw you a bad hand, but if you are skilled enough then you can make it through okay and turn it around. With BPM, this does not quite feel the same, as the balance doesn’t seem as well tuned as those other examples. I encountered far too many runs where I was thrown a no-shop modifier in the first stage, only to then have every ability or armour effect being geared towards earning gold, with no benefits to damage or even one of the bank areas to make the most of the collected currency. 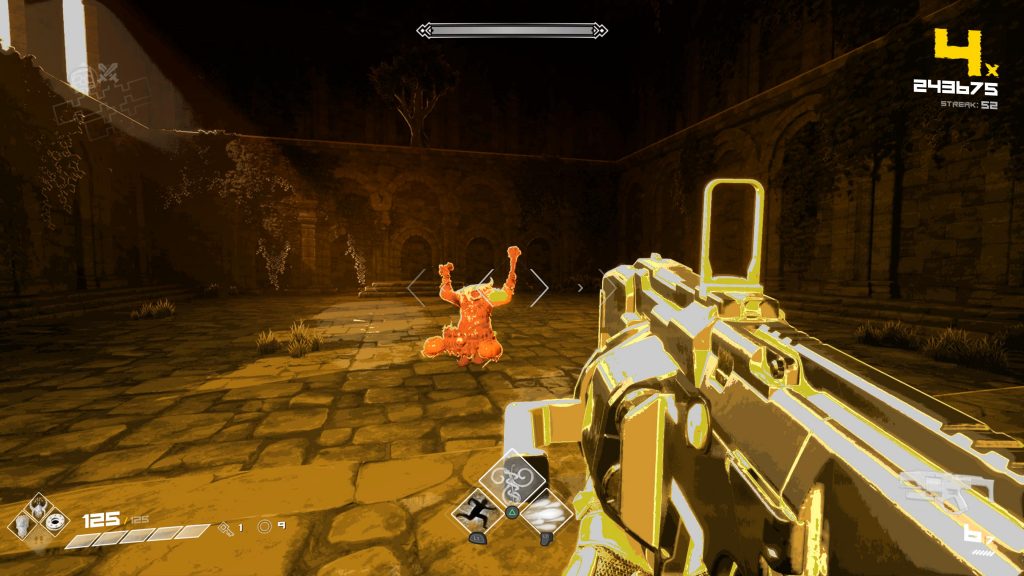 It works the other way of course, you can encounter runs which throw every good thing at you, but these are few and far between. On one run, I encountered a pickup which damaged enemies in the room if I kept hitting buttons in time with the beat, whether or I not I was aiming at the creatures in question. This made the game feel super easy and if it wasn’t for stupidly falling into a lava pit, I would have been able to get through the several levels without much trouble.

Where BPM shines, is in the middle of these, however rare it is to encounter. This is where you don’t quite get everything you need, but the RNG is not completely against you. This gives you the option to play the game and build your character to one of the many builds that you can play with. Finding and gambling on the potential of finding gear that works towards a singular or synergised goal is incredibly rewarding and lets the player overcome any odds they face in time and with skill. Lastly, for all the faults with an RNG system like this, it cannot be said that repetition is a problem as there is plenty of variation in even the earlier stages, thanks to the themed modifiers. These can add effects to levels you have seen before, whether that be to turn the lights out, add freezing paths or make add exploding skulls everywhere.

Most importantly however, is the music. For any other roguelike, this would be considered a bonus. However, as this is a rhythm action game, the soundtrack needs to be at a level where repetition of the background music doesn’t kill the experience. Gladly I can say that it is excellent, especially if you love heavy metal. Throughout the campaign, there is a mixture of styles which ranges from slower, punchier riffs that sound like they were lifted from early 00’s metal acts, while latter stages and boss encounters use a more urgent, fast paced shredding that fits appropriately. 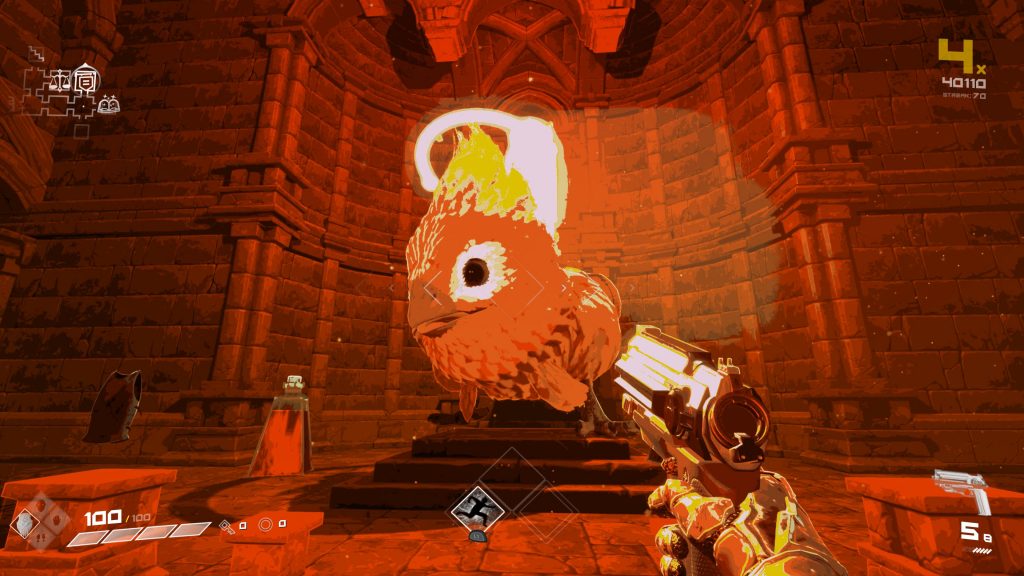 In a sea of Roguelikes that appear to be coming out of the woodwork every week, it’s great to see another emerge as one of the good ones. BPM: Bullets Per Minute is a solid crack at that genre and a solid rhythm action title to boot. It’s just a shame that the tuning isn’t quite there enough to make it feel as fair or as considered as other titles within the same space.

BPM: Bullets Per Minute
7 Overall
Pros
+ Has that “one more go” vibe
+ Solid gunplay, with satisfying rhythmic shooting
+ Feels great to play when everything clicks
Cons
- Not the easiest game to get into, takes a lot of failed attempts before success
- The random elements can be particularly brutal, often causing unfair odds
- The early stages get very repetitive
Summary
As with most roguelikes, BPM: Bullets Per Minute is one of those games that you will either love over time or hate immediately and shelve for other things. The variable is within the random generation and contending with whether the game wants to throw you a bone or not. Aside from this, BPM is a solid meld of the rhythm action and FPS genres, combining an excellent metal soundtrack with solid gunplay that has a lot to offer, if you can break the stubbornly difficult surface.