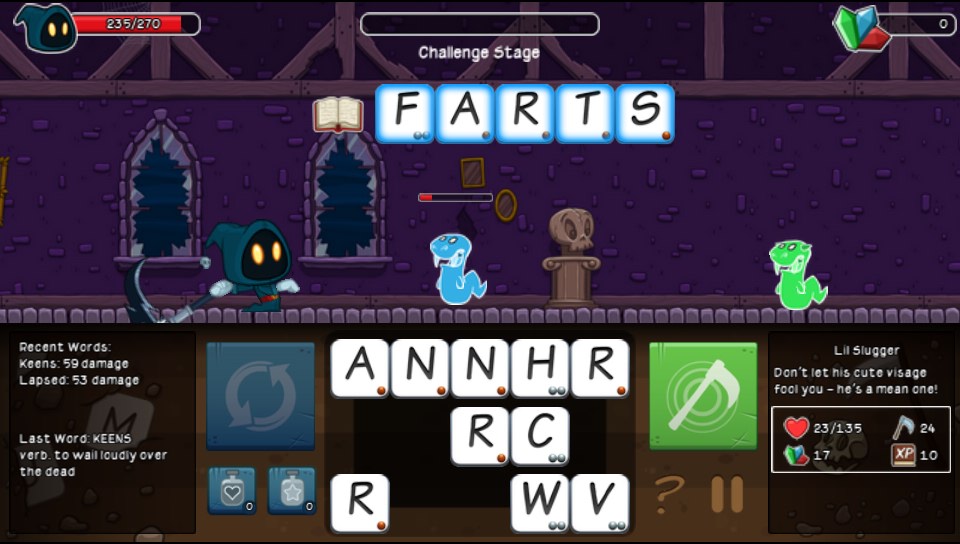 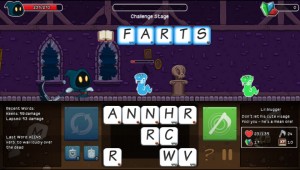 Its time to use words as weapons, imagine if Susie Dent from Countdown had a scythe and would use it to beat the contestants if they scored less than her.  Letter Quest Remastered is nothing like that, but then also sort of is.  Mixing words games with an element of RPG progression Letter Quest sees you spelling words in order to defeat your enemies and level up.

Also a mobile game, it’s not the first time that we’ve seen games like this jump to the PS4.  Given this you shouldn’t come to Letter Quest expecting great graphics or anything which will push the PS4, its resolutely 2D and simple in presentation.  However in keeping with the best mobile phone games, the playability and one-more-go-ness of it really makes the game shine.

You play as a cute little grim reaper who must clear stages of enemies in order to progress.  Instead of hitting buttons to attack though, you must spell words with longer and more complex words hitting harder.  You get to chose from a grid of fifteen letters, with used letters being replaced each turn.  On the PS4 you select your letters with the sticks, but on the VITA you can use the touch screen making it feel a bit more fluid.

That’s the basics of the game, spell words to defeat enemies.  What the game does though is slightly alter the rules to keep things fresh.  Often the letter tiles will also carry negative affects, which make you think on the words you choose.  From plague tiles which will infect adjacent tiles if not used, to poison tiles which also deal you damage if used in a word.  These neat distractions serve to keep the game fresh, and make you think about your next move. 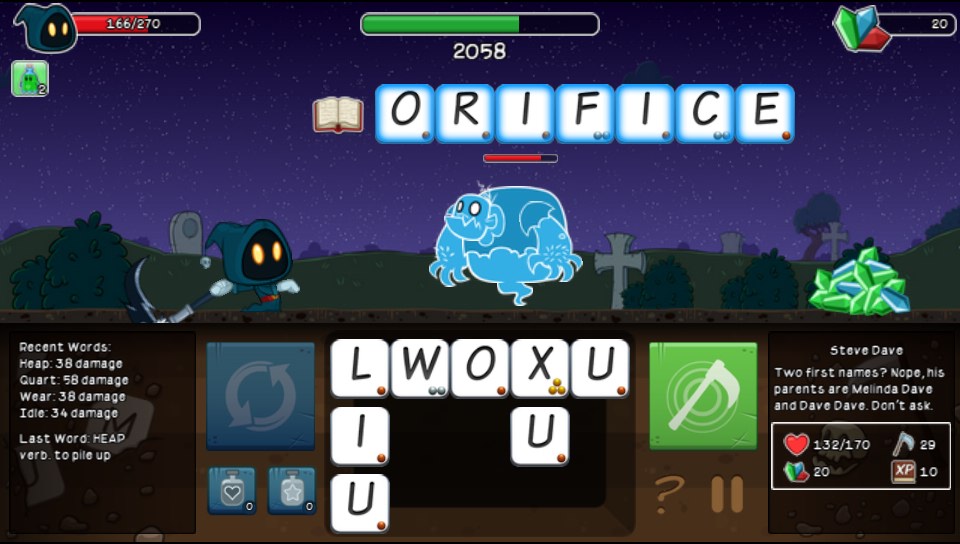 Each level is short, no more than a couple of encounters, and after each level you can go to the shop to spend your loot on new upgrades.   Whilst initially sounding like a nice idea this aspect also informs my major gripe with the game.  There are artificial difficulty spikes throughout this game, mainly in the bosses.  These enemies have so much health that you’ll need to have upgraded both your own offence and defence in order to withstand their attacks.  I was regularly hitting six and seven letter words, yet unable to defeat some bosses.  This resulted in a need to grind out earlier levels in order to level up, and get better equipment.  This reminded me of the kind of tactic mobile games will employ in the in app purchase model, but as this doesn’t exist on the PS4 or VITA it just meant a lot of grinding.

Aiding the grind of the game is the fact each level has multiple challenges to complete.  These could be a simple as finishing the level within a strict time limit, to the more challenging where you can’t use certain letters.  These challenges give some degree of variation to the game and aid longevity, however the way you basically need to complete these in order to grind out your levels results in them just becoming another task to complete. 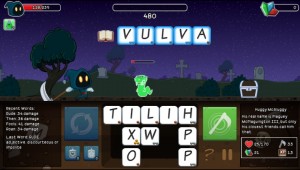 The thing with this game is that it’s compelling.  It’s all about bettering yourself.  If you’re reading this review then you can spell, and you will be able to play this game.  But you’ll also want to find better and bigger words, this need to challenge your ability is very addicting.  You don’t need to know what the word means in order to spell it, but you need to have knowledge of it.  As an aside the game will give you a description of each word you spell.  This is a very simple challenge, but one which really gets its hooks in.

Letter Quest Remastered is a game with a very simple concept, but one which will keep you coming back for more.  It works on the PS4 but is much better suited to the portable play of the VITA with it’s pick up and play nature harking back to its mobile roots.  With it’s genre blending styling’s this is a game which is easy to enjoy.

Letter Quest Remastered
7 Overall
Pros
+ Addictive pick up and play gameplay + It is always fun to spell rude words + Makes you want to better yourself by getting bigger words
Cons
- Some unfair artificial difficulty spikes - Smells a bit of in app purchases - Definitely not fully utilising the power of the PS4
Summary
A quirky mix of countdown and an RPG game which somehow works. It always makes you want to spell bigger words and better yourself, to get higher scores. Or you can just spell POO.