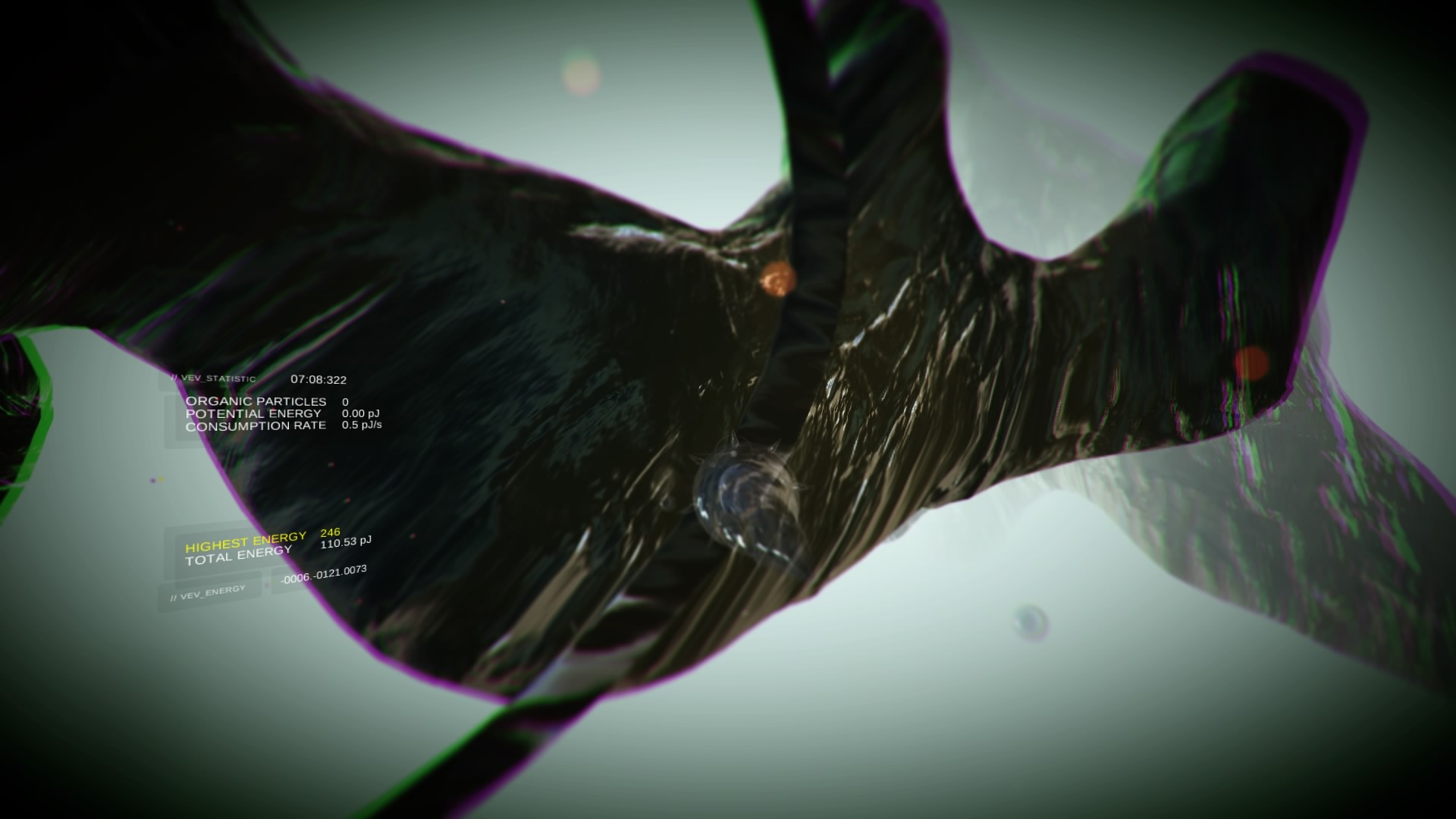 EDIT:  this game got patched and had added VR support.  Check out the updated review HERE.

When Truant Pixel recently turned up on the PlayStation Europe Blog to talk about VEV: Viva Ex Vivo, my interest was definitely piqued.  We need more interesting game concepts and VEV‘s microscopic exploration gimmick definitely looked interesting.  And it kind of is.  Remote piloting a microscopically tiny drone around various liquidy levels is certainly different and the game’s electronic microscope look (which appears to have been primarily designed for a free PSVR update when that particular bit of hardware is released) certainly is unique.  In an age of indie games with either a hand-drawn art style or an 8/16-bit look, this is a breath of fresh air.

The game’s menu interface sets the tone for the game.  There are three elements.  A pile of lab notes that acts as a little bit of background to the game – the ‘story’ being that you’re in a lab and your job is to pilot the Virtual Eukaryote Visualizer in various sample substances – and a computer screen allows you to select the sample you wish to splash around in (fresh water, soil, blood and cerebrospinal fluid as well as three unlockable substances).  In the middle of the screen is a microscope that acts as your way into the game. 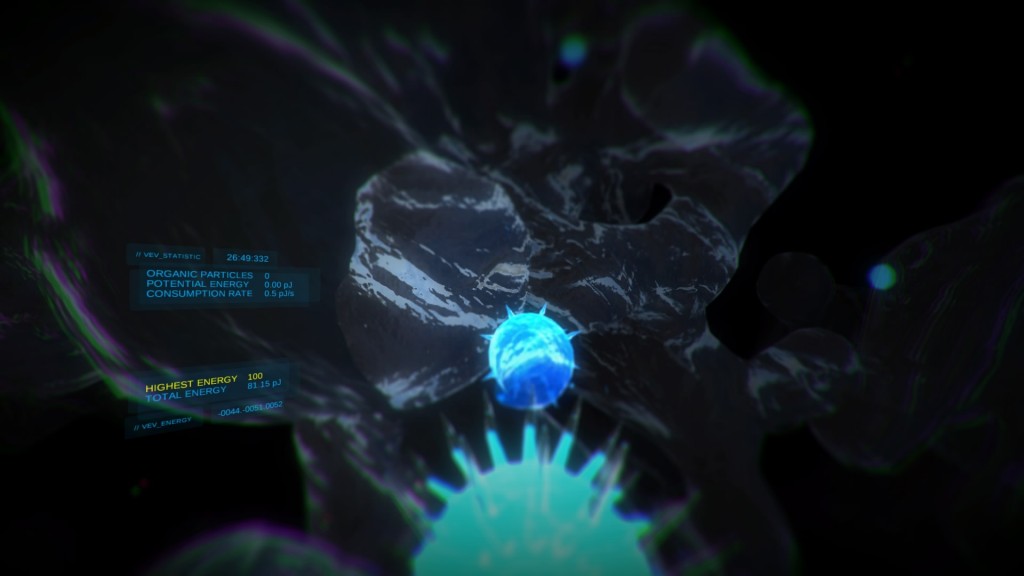 Once you’re in the game things get a little weird.  Not in terms of the concept of the game – you float around grabbing particles of energy while various organisms attack you, it’s actually quite normal once you get used to the idea – but rather in terms of what VEV aims to achieve.  It hurts to say it but there’s just no game here.  In an era of so-called ‘walking simulators’ the gaming public are prepared to accept periods of no real gameplay but VEV pushes the limits of that.  Literally all you do is float around (which in terms of gameplay is much like flying) looking for particles of energy.  Moving costs energy (especially if you accelerate) and so finding energy is super important (it should be, it’s literally all you can do).  It’s maybe a little bit like playing Snake on an old Nokia but much less addictive.

The first problem is that the particles are really hard to see.  They are tiny and don’t show up against any light parts of the background.  They aren’t exactly plentiful and given that most of the time you are accelerating away from the denizens of that particular level, it’s pretty easy to run out of energy.  For a game where there is barely anything to do, it is actually kind of difficult to make it to each level’s end (arbitrarily a thirty minute time limit).  Steering into them isn’t that easy either.  There’s no lock on or magnetic pull either.  Particles stay attached to you until you ‘absorb’ them for energy.  Gather a big collection and that makes you bigger by default and they’ll slightly attract other particles.  Good luck holding onto them for long enough to see that happen. 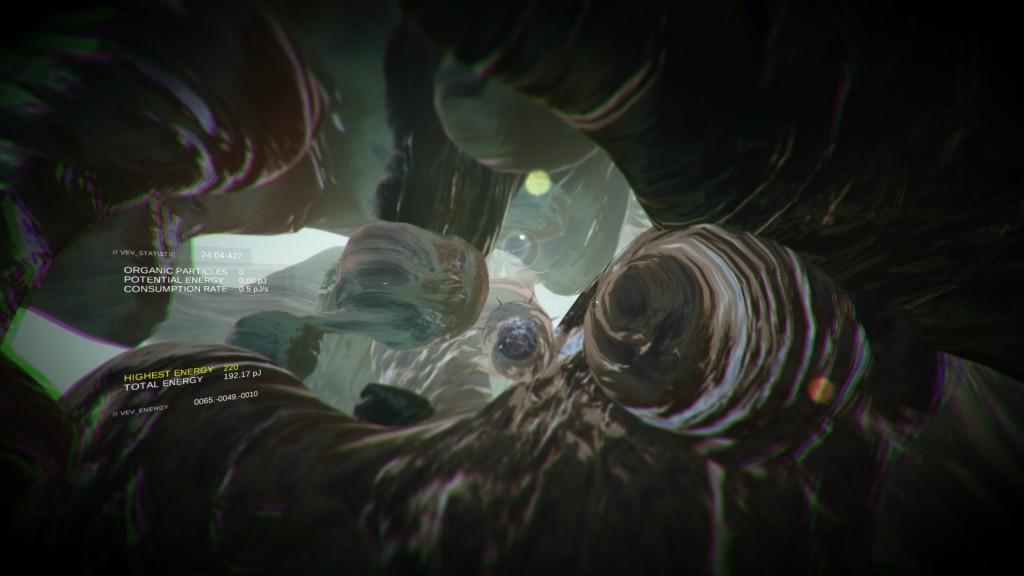 When you attract the attention of an enemy, there isn’t really much that you can do.  They follow you around and either bump into you (pretty annoying when you are lining up your next particle grab), latch on and suck the energy out of you or steal any particles that you are carrying.  Some can be shaken off by crashing into walls but this can easily disorientate you and given that there’s no real way to know where you are in a level (they are procedurally generated and pretty much made of blobs).  The draw distance is quite limited and you can’t control the camera which is particularly difficult on the ‘blood’ level where a large blob comes up from behind where you can’t see it and one hit kills you.

It seems that being good at this game is a combination of knowing how much you can accelerate and then just being lucky in terms of finding energy.  As far as gameplay goes it might be just about the most flawed game outside of Mastercube.  Aside from being a little bit frustrating, it’s unparalleled in terms of just how empty and dull it feels.  I can get behind the idea of exploring in this environment but I need some actual gameplay.  In the end it feels like Truant Pixel were just happy with the setting and didn’t really try to make the gameplay excel.  It’s easy enough to demonstrate that too.  Just take this exact gameplay and imagine it set in space.  It would still play the same but the reviews would not make for pleasant reading. 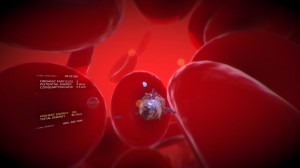 If VEV is, as it seems to be, a game made for PlayStation VR then it’s release now just seems utterly inappropriate.  By the time VR lands, this will have been forgotten about.  And the one thing the game has going for it, the setting, isn’t even that nicely represented.  It certainly doesn’t look any better than Nano Assault Neo-X (which has a similar setting) and that was hardly impressive.  It looks okay but it doesn’t wow you.  I love the setting but it’s not eye candy.  Indeed, even the music feels wrong.  As expected it’s electronic but it doesn’t have a smooth, relaxing feel to it.

There’s passion behind this game. You can feel that.  It’s not just a cheap cash in. But there’s also just a heap of terrible gameplay decisions. I may be missing the point but I don’t think I am.  In the process of writing this review, I’ve actually fired up the game three times just to make sure I’m not missing something.  And if I’m right then this game is fatally flawed.  Damn.

Viva Ex Vivo
2 Overall
Pros
+ We quite like the setting
+ It looks alright
Cons
- There's not much gameplay here and what there is isn't actually any fun
- Feels like a PlayStation VR tech demo
Summary
An inexplicably empty game. There's nothing to see and even less to do. What is this? Literally what is this?