Strange how life is at times. I can’t recall ever playing a game involving a major farming element before and yet after reviewing Graveyard Keeper (and its most recent DLC) I’m now reviewing Kitaria Fables. Not that they’re the same game by any stretch but both have a reliance on resource procurement for crafting and generating funds. 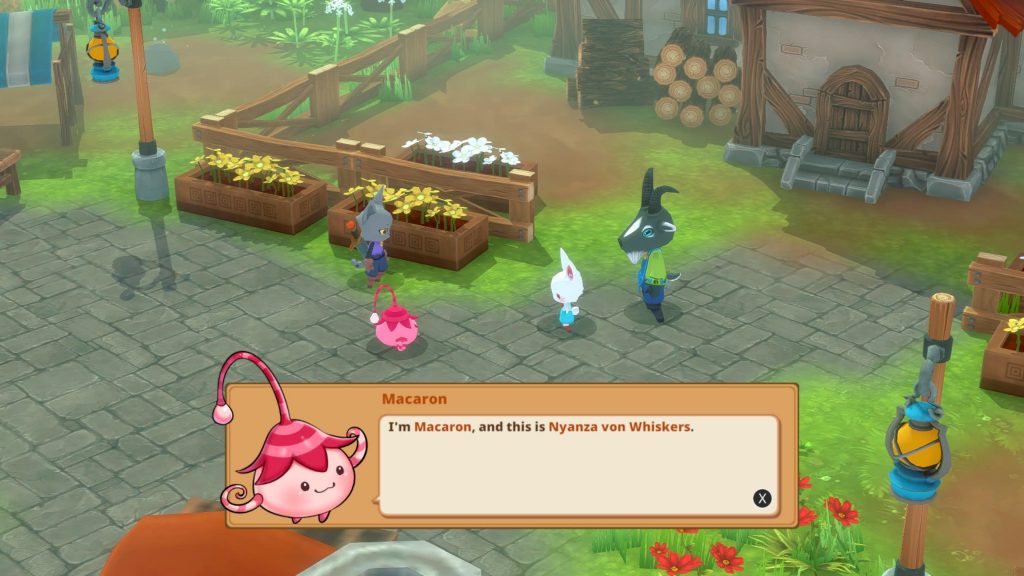 Monsters have started to act up, leading people to believe in the return of The Calamity. You play as Nyanza, a two legged cat soldier who is accompanied by his little orb-like friend Macaron, who are sent to Paw Village to help with the monster problem. By chance Nyanza is the grandchild of someone who used to live on and work a farm there so your home base is set. You’re then given quests, both big and small, which will send you out of the village to explore all the surrounding areas, defeating monsters and collecting materials.

Out in the wild you’ll encounter monsters and the combat is relatively involved. You’ve got basic slashes with your sword, you’ve got a bow for ranged attacks and a very generous dodge roll with invincibility frames. Switching between sword and bow requires changing what you have equipped, either by going into the menu (which doesn’t pause the game) or using a shortcut on the dpad. On top of that you’ll gain access to magic and special attacks which can be mapped to the shoulder buttons and use a special metre which fills as you attack. 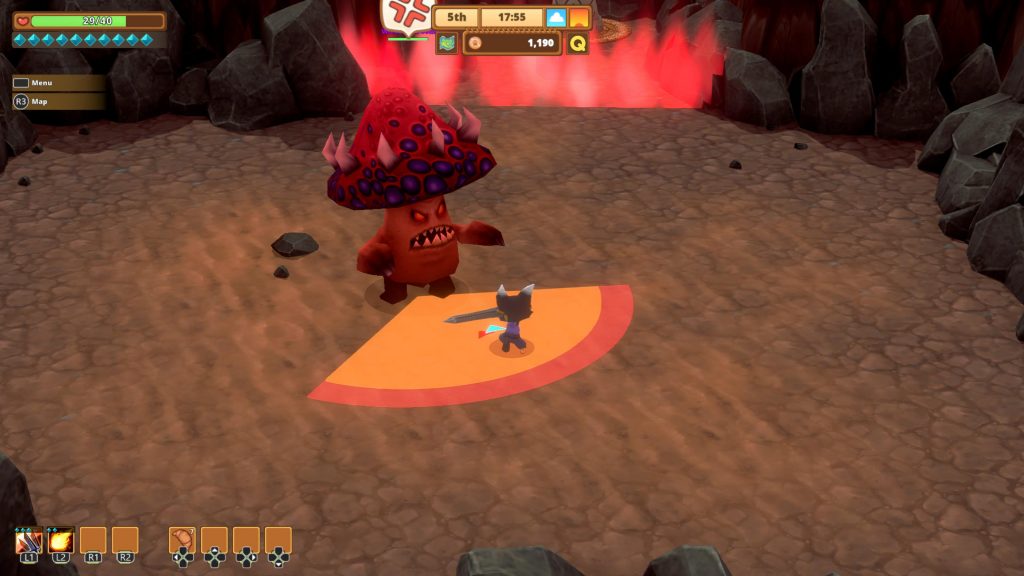 There are quite a few options for combat but this actually just makes it quite easy. When enemies attack you’ll see a cone of danger appear which should give you enough time to roll out of the way and keep wailing on them until they attack again. I killed far stronger monsters than I should have early on by just being patient, as my weak weapons were doing little damage but the enemy couldn’t hit me. That’s not to say I didn’t die, groups of enemies can time their attacks to make things very difficult for you, but dying only sends you back to your house the following morning with no other consequences. The few boss encounters there are are one-on-one and I never died to them, barely took a hit even.

Enemies will drop items when defeated. Some are guaranteed whilst some just have a chance to drop but these items can be taken to shops to craft food to replenish health and give temporary stat boosts or equipment, like stronger swords, bows, armour and accessories. You’ll also need some money for the transaction. You’ll find some as you explore and get some as rewards for completed quests or you can sell stuff in a chest outside your house, but this is all chump change and won’t get you very far. 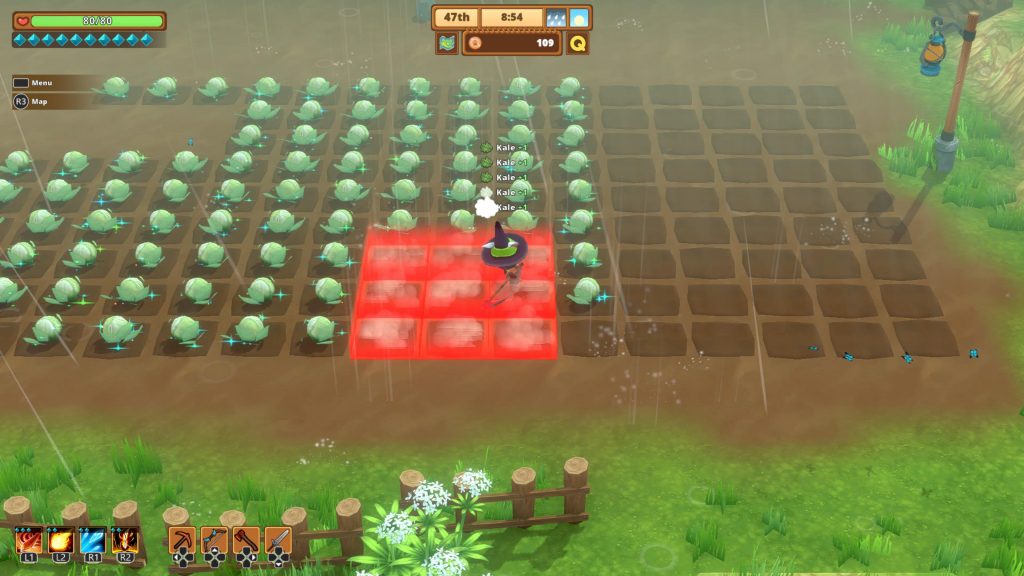 This is where the farming comes in. You don’t get the tools you need straight away but after a few quests you’ll get a hoe, axe, pickaxe, watering can and sickle. The axe and pickaxe can be used to cut down trees for wood and break rocks for stone and ores respectively, whilst the hoe, watering can and sickle are used specifically for farming. You’ll use the hoe to prepare the soil, plant seeds into that soil and water it with the watering can. They need to be watered every day, unless it’s raining, and once they’re ready you can either pick the produce yourself or use the sickle to collect multiple at once.

Early on farming is a massive pain, but it is the best way to make money. There are 361 patches of earth that you can plant things into and the first tools you get only tackle one patch of land each. That’s a lot of walking to a patch of earth and pressing a button to prepare the soil and water each patch (planting is very easy by comparison), returning to the well to fill up your can when you inevitably run out of water. As you upgrade your tools they’ll cover more patches of earth in one go, up to a 3×3 square. I have to admit though, even with the best tools waking up every morning and watering every plant was never an enjoyable experience. I’d have loved an automated service later on. 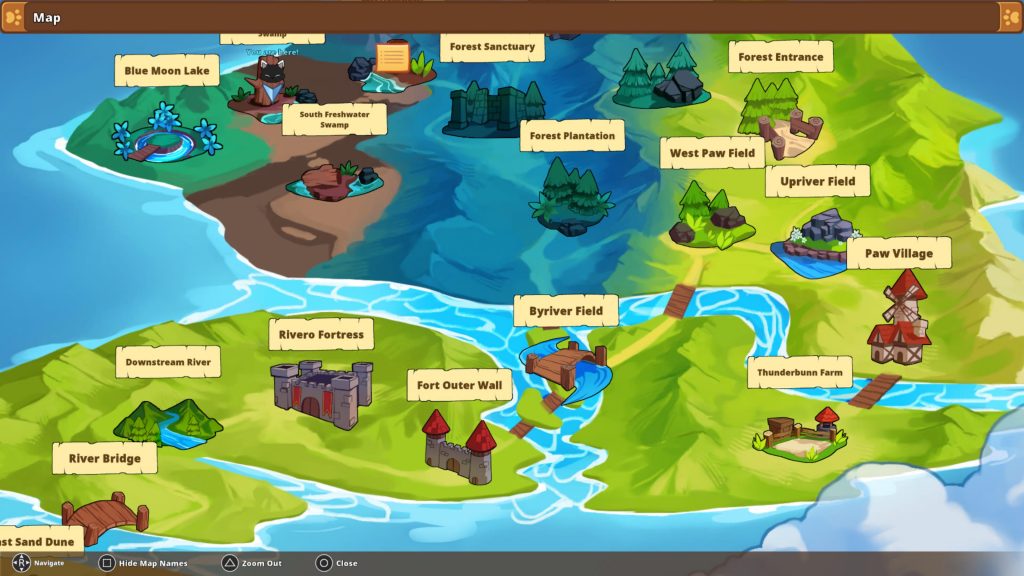 I never bothered with farming for the sake of crafting food as I never saw the point, like I said the game was very easy. Until it wasn’t. I got very far with barely upgraded gear and then I hit a point where enemies would take too much damage and kill me in one hit. That’s when I really knuckled down with the farming in order to make money as I had the materials necessary to make better equipment but the price kept it out of reach. Here’s where the game hit a lull. I was making progress with main quests and side quests up to this point but I had to stop just to grind money which, again, wasn’t fun. Your crops can take up to five days to grow which you can fill with grinding monster materials or you can just wake up, water the plants and go to sleep. Both just feel like busy work.

Once I had the funds I was unstoppable again and before long I had the best stuff going. However, because I had that stuff I wasn’t distracted by trying to get materials or money so I could just concentrate on the quests and there a problem appeared too. Quests appear when they feel like it. Some main quests will lead onto others but there were periods where I didn’t have any quests to attend to. You need to sleep, maybe one night, maybe two, maybe three – I don’t know. Eventually someone will have a quest to give you and you’ll need to find them, I don’t think the game tells you on the map that one is available. This could be an important quest that progresses the story or it could be someone asking you to farm some tomatoes, either way the quest progression would often leave me to my own devices which would ultimately lead to tedious grinding of materials. 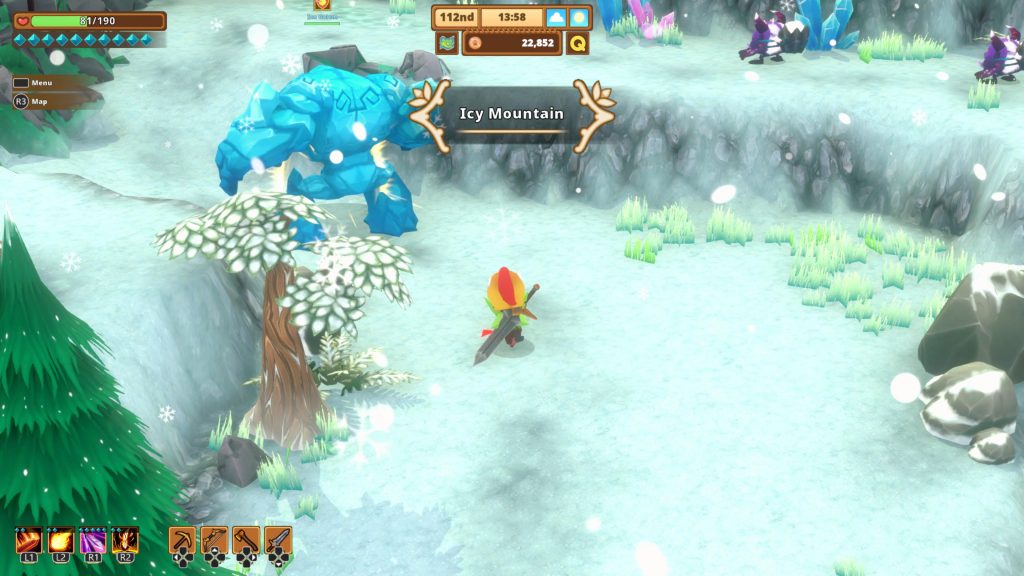 Once you complete the game you’re put into a post game world. I didn’t have any active side quests at the time and it seems, having slept for about two weeks worth of days, that side quests no longer become available once you complete the game. I know there are at least eight quests I haven’t done (items in stores say that they will become available once you beat certain quests) but the game doesn’t seem to want to make them accessible, which makes me wonder what the point of a post game is. Surely you do that so that people can finish things they didn’t do before defeating the final boss? The annoying thing is I put thirty hours into the game and if it was more forthcoming with its quests I could have done them all and then some, but as it would just withhold them for unspecified amounts of time they appear to be locked out forever now unless I want to grind through the entire game again.

You can share the grind with a friend in local co-op if you so choose, though each person will need their own equipment. Each area is quite small, separated by loading which, on the PS5, is quick. Not so quick as to not have the game logo appear in the bottom right but quick enough. The graphics are cute and brightly coloured, if not pushing the PS5 too hard. Weirdly there are a lot of PC style graphical options to toggle in the menu (shadow quality, texture quality, grass density), but annoyingly they reset every time you start the game.

There is an issue with foreground elements getting in the way when you’re fighting enemies thanks to the angle of the camera but it’s just something you have to be aware of. The music can be very catchy and doesn’t grate, which for the amount of time you’ll be playing it is quite impressive. There is no rumble, so no DualSense features here. 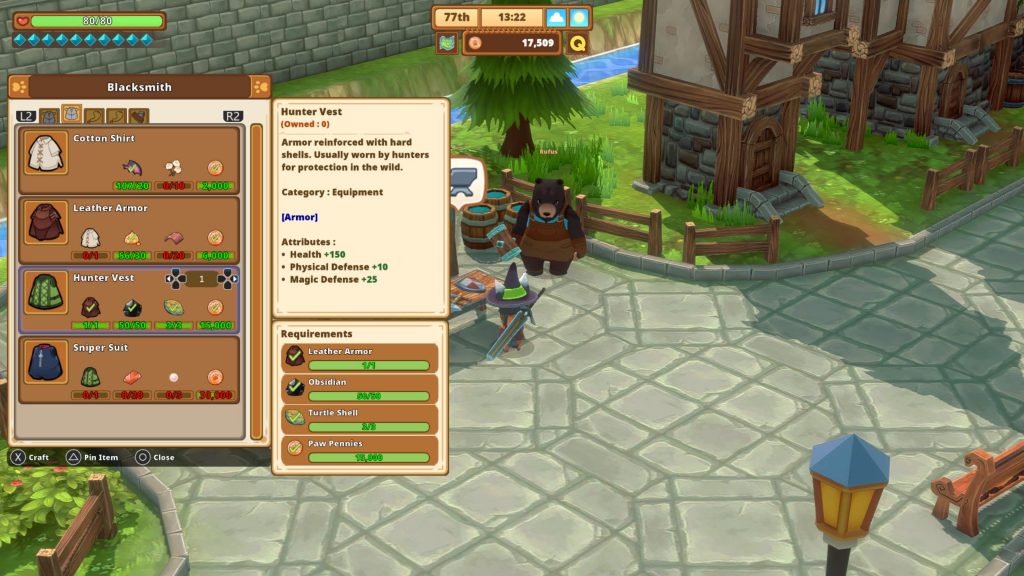 Kitaria Fables is okay. There are some odd choices when it comes to dishing out quests and the farming is a necessary chore thanks to the economy but the combat is just involved enough to make running around enjoyable and the cute graphics and catchy music enhance the exploration. If you’re happy to take your time, farm and relish the quest for materials then Kitaria Fables offers an entertaining if flawed adventure.

Kitaria Fables
6 Overall
Pros
+ Combat is surprisingly involved
+ Plenty of items to make
+ Cute, colourful graphics
Cons
- Quest distribution feels too drawn out
- Farming is always a chore
- Pointless post game
- Scenery can get in the way
Summary
Kitaria Fables offers some fun exploration and combat in the quest for materials and better equipment. The quest distribution is slow enough to needlessly prolong the game whilst the farming is a necessary chore if you want to make money. There's a cute game here for those who like to take their time, especially if they have a friend for the couch co-op, but the busy work and slow pace may put off some.