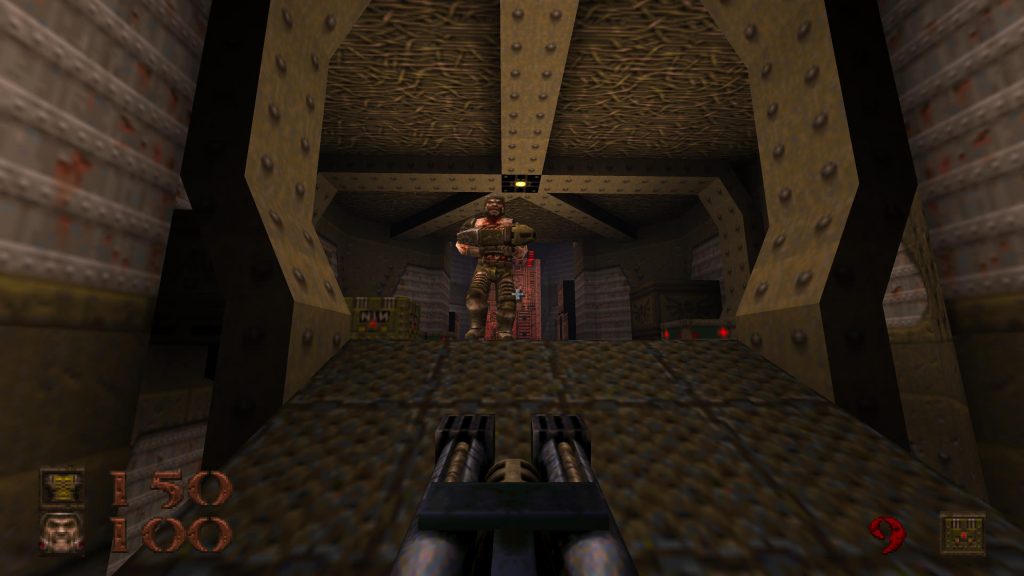 While it should need no introduction, Quake is one of those games that tends to be forgotten in this day and age. As part of the Id Software legacy, it is often overshadowed by its forebears, whether that be Wolfenstein or Doom, with them getting all the love with their fancy alternative World War 2 narratives or bombastic demon slaying gunplay. However, to accept this position for the series is to deny its importance and impact on the gaming industry as a whole.

You see, Quake was something special. Back in 1996, the first-person shooter was in danger of becoming somewhat stagnant. After Id had previously shown everyone how it was supposed to be done with Doom, there were a stream of clones, but few would venture further from the run and frag gameplay, set in pseudo 3D corridors that changed dependent on the theme of the game title. Nobody seemed to want to take things further, until Romero, Carmack and other Id crew decided to propel this sort of action into true 3D for the first time. With the result being Quake and the engine powering it becoming a key component for most first-person shooters that would dominate the late nineties, with gems such as Half-Life, Call of Duty and Soldier of Fortune all being built using a form of the Quake engine. Let’s not forget also, that Quake was the game that popularised the concept of a deathmatch, speedrunning and even machinima.

When looking at the screenshots in the context of today, it may be difficult to see how a game that looks like this, could have been considered such a technical achievement, but it was. Back in 1996, we had not seen anything like this. Where now you may see muddy textures, back then we saw highly detailed gothic architecture. Instead of the muddled polygons that make up the enemies, we saw terrifying machinations of the flesh that made our skin crawl. When now you see awkwardly vertical pointed pencil shaped weapons, we saw an arsenal that empowered us against the hordes of horrors that we had to face. While Doom was influential and made FPS games popular, Quake was the first time an FPS made our jaws hit the floor, especially when you consider that this game came out in the same year as Duke Nukem 3D. 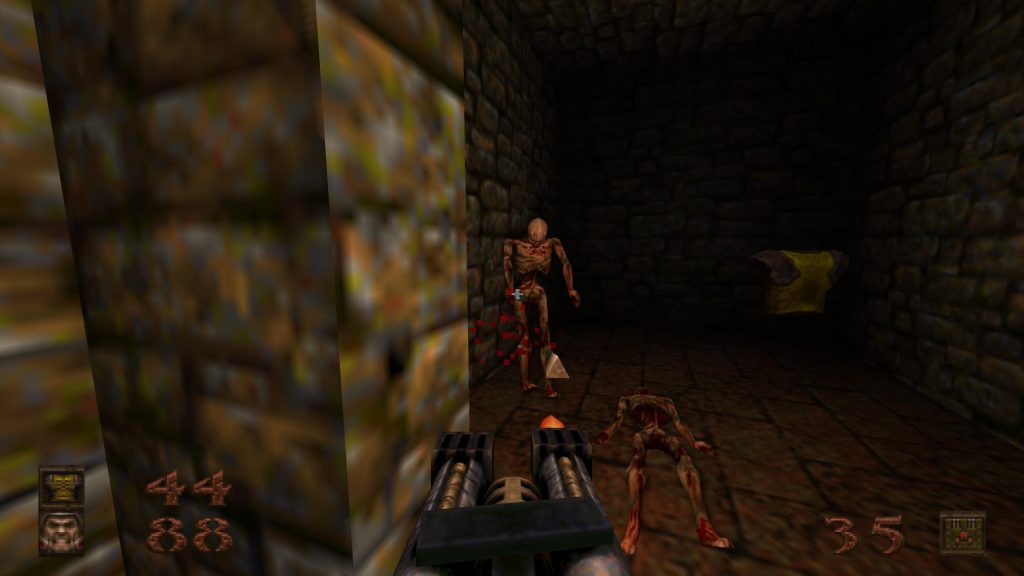 However, despite all the praise I want to heap into this game, Quake is one that has unfortunately fallen by the wayside over the past twenty-five years. While there have been a few expansions and a healthy modding community for the game since its inception, there has not been a true rerelease for the game since the N64 port came out in 1998. That is until now of course, thanks to the efforts of the ever-impressive Night Dive Studios and their affinity with retro shooters. I swear, without these guys the likes of Turok, Doom 64 and Shadowman would have been lost to time. What is great about Night Dive is that they ‘get it’. With each of their many remasters taking everything that is loved about the games that they resurrect, but with modernisations that make them more playable than ever, all without losing the look and feel of the original. I am glad to say that Nightdive have continued this beautifully with Quake and I couldn’t be happier.

What makes this remaster so special is not only the fact that you have the core Quake experience, with all episodes intact and resolution pushed to the highest current fidelity on PS4, but this also includes all the additional expansion content from the nineties and additional episodes made this year by Machine Games. Hidden in the add-on section also, is the ability to play the N64 version of the game, complete with glaring omissions and grimy CRT filter. Furthermore, you have the added benefit of customisation. Every tweak, every improvement can be dialled back or increased to your liking, letting you as the player tailor the experience to your liking. The enemies and locales get the typical facelift treatment with smoothed and enhanced models, but you could easily change it back to the blocky originals or add new effects like motion blur and enhanced lighting to bring the game into the modern age. It is all done so handily and with a level of respect that is often missing from other remasters that I have played, and it all contributes to that all essential game feel that Quake would be nothing without.

The speed of the action has never been more pronounced as this, with Ranger barrelling through stages at breakneck speeds that can only be appreciated with a frame rate that was originally lacking on older PC’s and the gunplay feels just as tight as it ever did. Despite the ludicrous speed, this is all balanced with the more considered approach that a player requires in a bid to succeed as the game is more tactical than the likes of Doom, with more encounters requiring a strategic approach to deal with rooms full of the shambling creatures that want nothing more than your head on a stick. Of course, when you become a deft hand at dispatching these creatures, you can then dial up the pace and focus instead on clearing areas in record breaking time, such as seen in the famous Quake Done Quick videos of decades past. 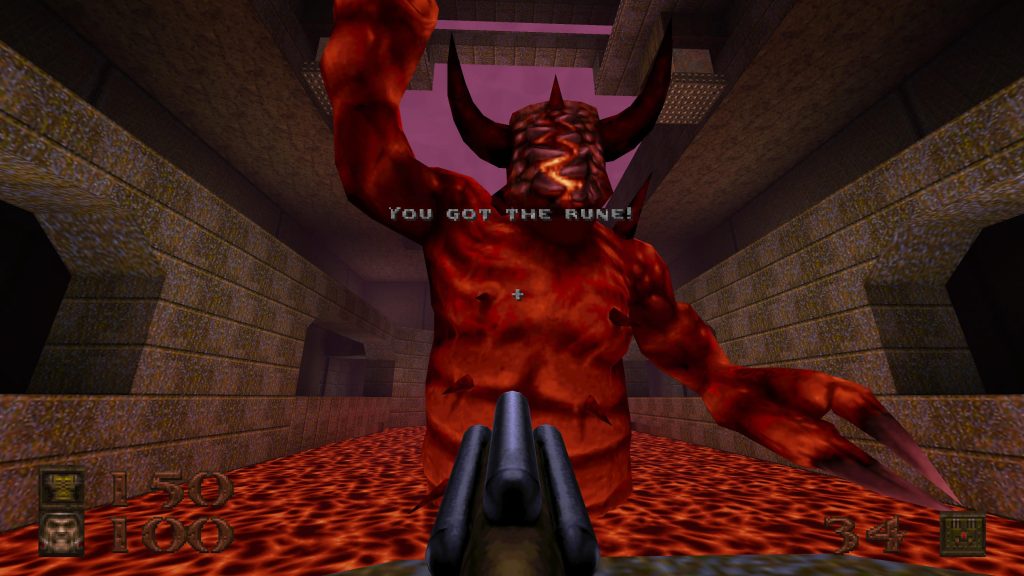 Also brought back is the atmosphere of the original, thanks in no small part to the long absent inclusion of the soundtrack by Trent Reznor of Nine Inch Nails fame. This audio has been missing for years thanks to the advent of license rights and the lack of support for digital rereleases. The console versions for the Sega Saturn and N64 also omitted this entirely, so it is great to finally hear the tunes again. Less musically inclined, this soundtrack leans heavily on the ambient with industrial growls, foreboding synths, and the unmistakeable grunts of Reznor permeating through the audio with menace. It’s like listening to one of the Ghost records but as if it were composed during NIN’s Downward Spiral era.

Let’s not forget everything else that contributes to the look of Quake. While the game has clearly aged in the past twenty-five years, there is an undeniable charm to it all. The gothic look of the world still holds the menace that it did back in 96, albeit in slightly different ways than nostalgia will remind. Unfortunately, beyond the rose-tinted goggles, the game still features a muddy brown colour format and certain areas become a pain to traverse as they are shrouded in pitch black darkness. However, if you can look past this then you will do fine with Quake.

Any misgivings about the age of the visuals can be put aside when you have that controller in hand, and you are playing the game for yourself. Picking up the nailgun (in-game you psycho) and shredding either a Shambler, Vore or another player in the multiplayer is sure to raise a smile as it feels as great as ever. This is the part of the game that hasn’t aged a day with action that feels fast, brutal, and oh-so moreish. While it lacks the realism of two weapon systems and slower, ambling pace, with ranks. It is indicative of a time when shooters were simpler and to the point. Games that were designed primarily about the immediacy of the action and the aim of the player, rather than time spent earning perks to overcome weaknesses. If anything from this era is worth preserving, then it is that as this type of game just doesn’t get made anymore. This is further encouraged by the excellent addition of cross platform play, meaning that there should always be a solid enough community available, whether you are venturing through the game in co-op or fragging eachother in deathmatch. 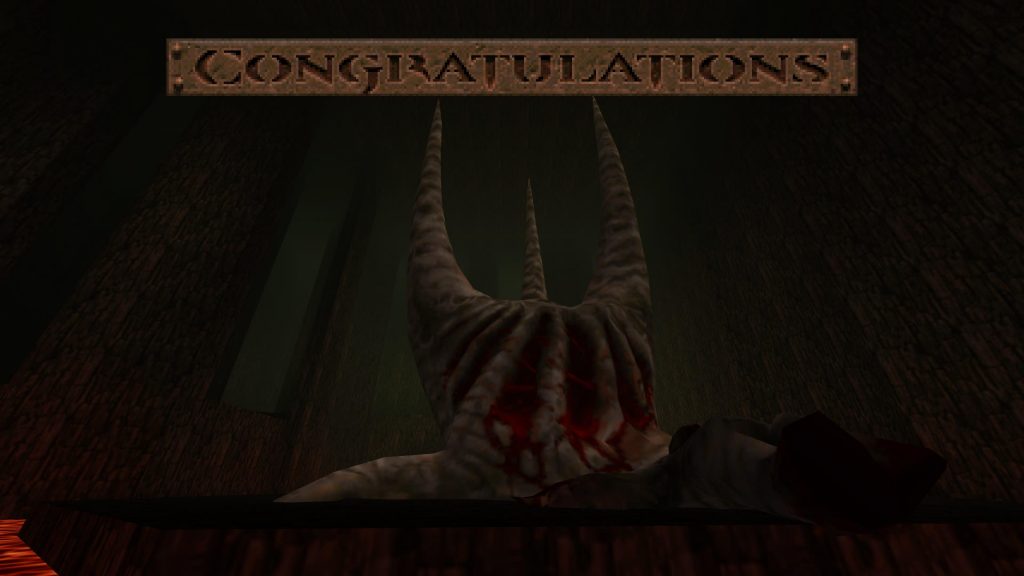 Quake was such an achievement back in the day, that it deserved more recognition than it got. It didn’t perform nearly as well as Doom did, even if it did garner success and a legion of devoted fans and developers which would cite its influence over the years. However, with this remaster we can hope that it garners the respect and love that Quake truly deserves, with further hope that newer gamers will pick this up and enjoy it just as much as us oldies did back when 3D gaming was something to look forward to.  In making this remaster, Nightdive has made the strongest argument in Quake’s case, providing the most definitive version we could have hoped for (and more), it is now just up to you to jump in and give it a go.

Quake Remastered
9 Overall
Pros
+ The definitive Quake experience, chronicling the main game, all the expansions, including a new episode and even the N64 release
+ The most customisable feature set i have ever seen in a remaster on console
+ Super fluid in motion, with some of the best classic gunplay going
+ Cross-play cooperative or online multiplayer which should keep the community going for years to come
Cons
- Gamers from the 00’s onward may find it difficult to embrace this (But they should at least try)
- Too dark in some places, especially on an OLED TV
- They just don’t make them like this anymore
Summary
Quake finally gets the love it deserves after twenty-five years in the dark, with by far the most comprehensive remastered collection to date. Modernised without losing anything in the process, Night Dive have created something special by not only bringing the core experience back, but with all the expansions, new episodes, and a boatload of features that players can tune to their liking. This release takes an important yet aging technical milestone and turns it into an essential experience that is both worthy of a new audience and the embrace of old fans.