Graveyard Keeper has been out on PS4 for a couple of years so why review it now? Well a new DLC has released, Game of Crone, and it just made sense to cover the game in its entirety and then tackle the DLC separately. All three DLC integrate into the game so I will touch on them briefly, but this is a review of the base game primarily. 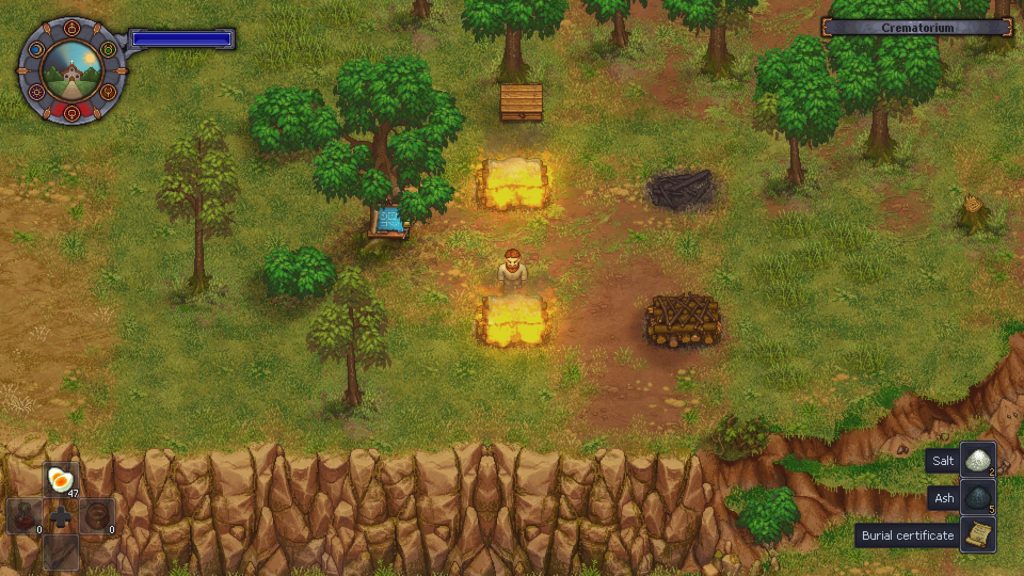 You start the game heading home from work whilst on the phone to your wife. It’s a normal end to the day – until you get run over. You wake up in a new world and are told you’re the new keeper of the graveyard in an old-timey village. You have the knowledge of the modern day but with the tools and methods of the past you must help the locals, find out the mysteries of the keepers and get back home.

If you’ve played something like Stardew Valley then you have a good idea about what’s involved in Graveyard Keeper. You start with some basic tools and with them you can collect materials to start your empire. You’ll be chopping down trees for wood, digging up sticks, getting stone from rocks and with all of these you can build different workbenches which in turn will help you build other things.

The titular graveyard is very important. A donkey (talking, of course) will drop off a dead body regularly and you’ll need to deal with it. Your primary method is to bury them, but you won’t want to just chuck them in the ground as different bodies are of different qualities which will either enhance or damage your graveyard. This is where things get a little darker, as you take the body to a table and cut them up. You can remove meat, skin, fat, blood, the skull and organs eventually and they’ll all become materials that you can use. Removing different parts will either improve or damage the body and then, if you’re happy, you can put them in the ground, receive a burial certificate which you’ll get paid for and decorate the grave. If you’re not happy you can always just throw them in the nearby river… 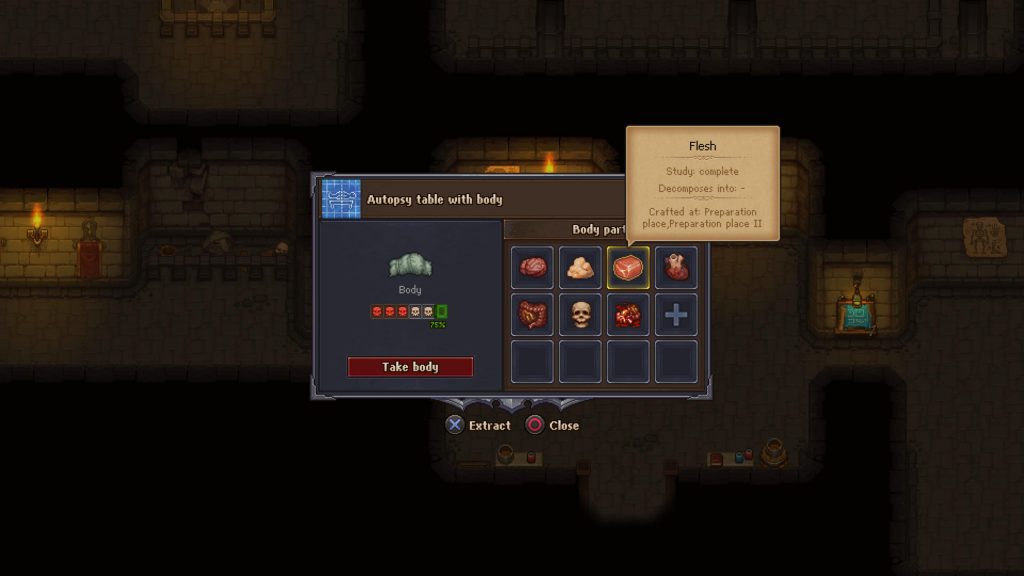 You’re maintaining the graveyard for the Bishop, who will give you quests and reward you based on how upgraded it and the chapel are. He’ll eventually allow you to start doing sermons once a week which will net you some money and faith (another material). The better your chapel and graveyard the more you get. This is just one element, as a week is six days and a different character will make an appearance on each day. The Bishop on one, the Astrologer on another, the Merchant on another and so on. Each will ask you to do certain things which will lead you down a path to upgrading your workstations, equipment and potentially give you avenues for making money.

By the end of the game you’ll likely have a largely full graveyard with an impressive chapel attached, farmland for growing crops, either to sell or use to make other things. A vineyard, a brewery, an alchemy lab and more besides. Everything you do takes energy which you can either recuperate with a beverage or by sleeping, which is also how you save your game. Juggling grabbing the materials you need whilst also building stuff, interacting with important people on the specific day they’re available and managing the bodies being delivered to the graveyard is the loop of the game and it’s quite addictive. 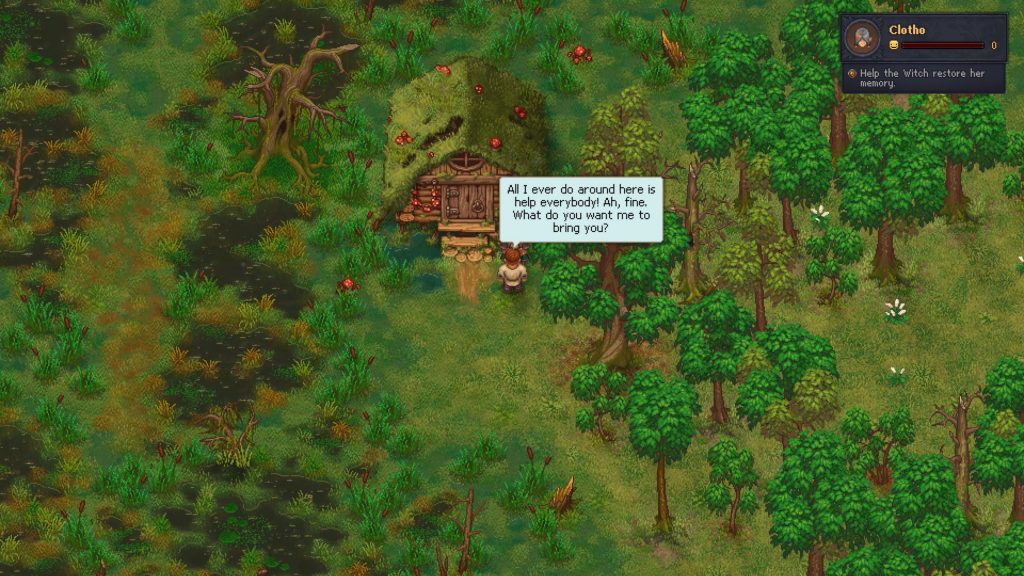 Not in that I’m thinking about it whilst I’m not playing it, but once you start playing it’s very difficult to stop. There’s always one more thing to do before you put it down for the day and so actually stopping can be a problem. “I’ll just craft this gravestone and then I’ll leave it. Oh, a body has just come in. Better sort that out. Oh, it’s a new day and the Astrologer is available. I’ve completed that quest for him so I better go an hand that in. Great, my crops have grown, time to harvest those and replant them. Oops, need more wood, better get that sorted before I go. Ah, another body…” and it goes on.

Most things you do will earn what equate to experience points of which there are three types. You use these to unlock branches on a skill tree, allowing you to become more efficient or build new workstations or items. The skill tree isn’t the clearest so you’ll probably want the wiki (another benefit of arriving late to the party) open, especially when you get into alchemy. There were a few occasions when I wasn’t sure what I was meant to do or how to progress something which is a fault, but there is material out there to help you if you need it. 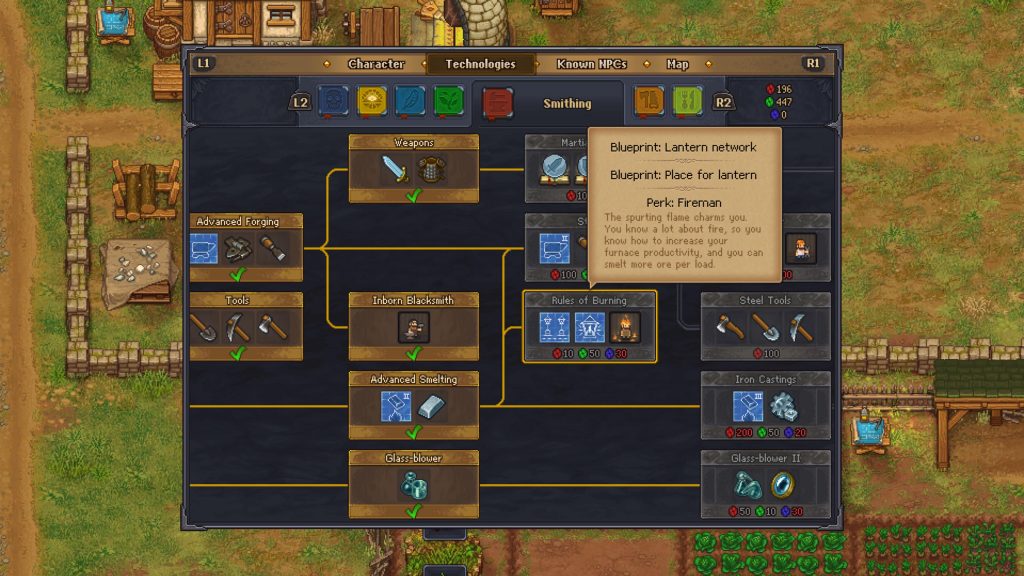 The DLC tends to give you things to help you out with your building. None more so than the Breaking Dead DLC which allows you to animate the corpses you get and turn them into zombie workers. These let you automate a lot of things that you had to do manually before, letting you focus elsewhere. It doesn’t break the game as the materials required aren’t really in abundance early on but by the end of the game you’ll want a network of zombies working your crops, mining and transporting stone, wood and ore for you and basically doing anything that you’d rather not. You still need to get hands on with certain things, like making sure there are supplies nearby in order for the zombies to do their jobs but it takes away a lot of the busy work and removes some of the tedium that is present early on in the game.

The Stranger Sins DLC adds a tavern for you to run, using the food and booze that you can create to earn more money and host events. Unlike Breaking Dead you also get a good chunk of story with this one, revealing a lot of lore about the village and what happened before you arrived. I’ve reviewed the Game of Crone DLC here. 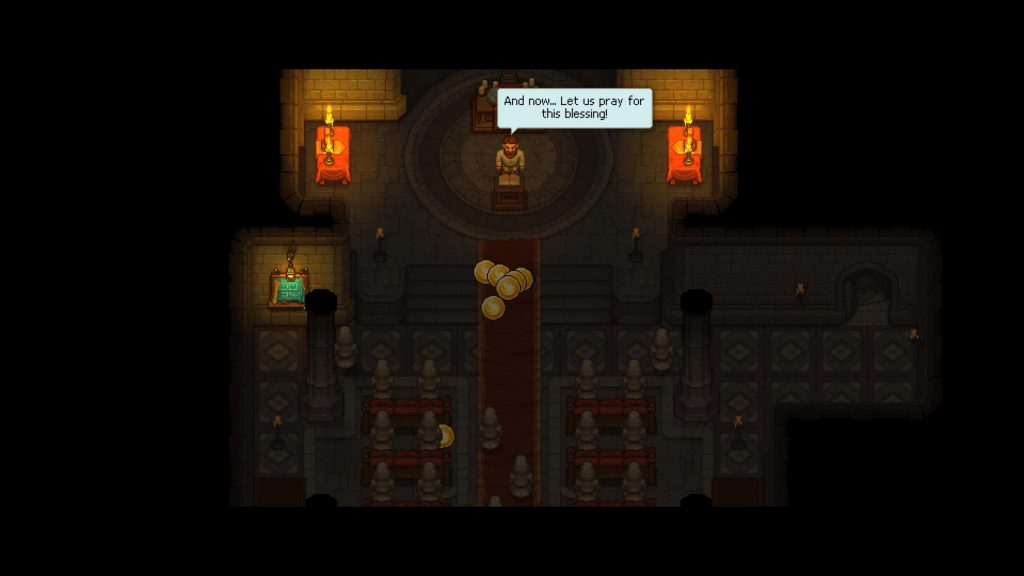 Everything is presented in the same visual style which is 2D and top down. The visuals are quite nice, very clear and full of character. The music is very good and as you’ll be playing for long periods you’ll probably find it floating around your head every now and then like I did. I did get some crashes, primarily when closing the game which wasn’t so bad but also as I hit parts of the game where there were cutscenes as the scenes would end it would sometimes crash, so make sure you’re sleeping often in order to save your progress. The other more common glitch was a stutter every now and then for no obvious reason. As the game is generally quite laid back it wasn’t an issue gameplay-wise and was just irritating, but there is some very basic combat in the game and hiccups occurring during that were less welcome.

I have enjoyed my time with Graveyard Keeper. Early on there was a lot of busy work but as things progress the game starts to open up and you get systems in place that help you to make more progress and that is very rewarding. The DLCs do help in this regard, as well as adding new content, which is a bit cheeky but the collection with the game and all the DLC in it is still cheaper than a new game and it’s not a short title at all, though there isn’t a whole lot of replay value or scope for doing things differently. 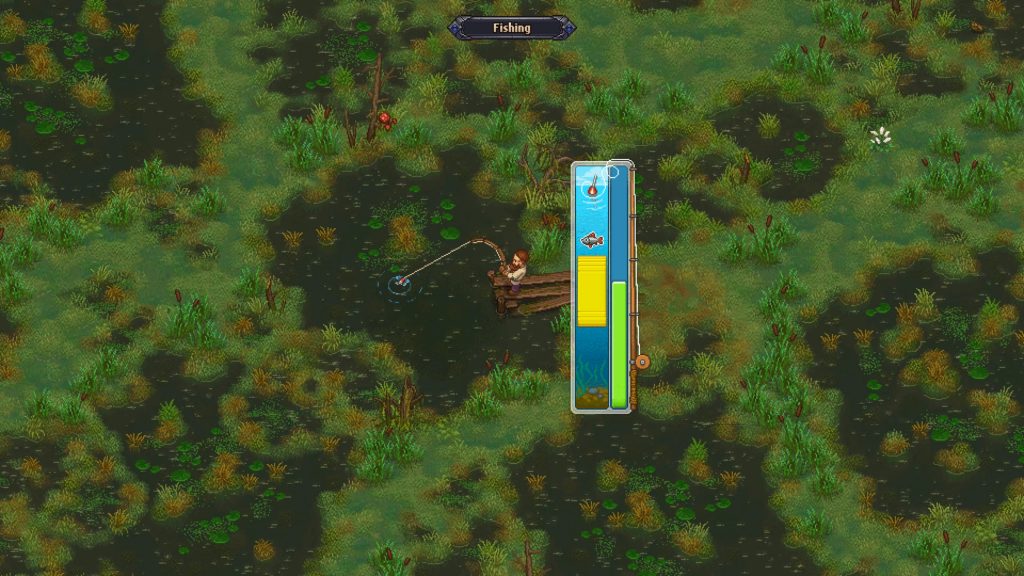 I’m not an expert on this type of game so couldn’t say where it stands up against its peers, but I believe Graveyard Keeper is a good game, especially with the DLCs. Not a perfect game at all, but an enjoyable game that has absorbed me throughout its playtime.

Graveyard Keeper
7 Overall
Pros
+ Powerful one more go feel
+ Rewarding when you make a breakthrough
+ Good presentation
Cons
- Crashing and hitching issues
- Some DLC required to make the process less tedious
Summary
Graveyard Keeper is an enjoyable, addictive experience. Without the DLCs keeping a decent supply of materials for all the building and crafting you need to do can be tedious, but when you unlock a new branch of industry or revenue stream the reward is high. Maintaining a graveyard has never been so much fun.