Ever since 2012, we’ve been telling anyone who will listen about the greatness that is Kingdoms of Amalur, an RPG that we first experienced on the Xbox 360 which combined solid storytelling, open-world exploration and fleshed-out RPG aspects with some of the best combat the genre has ever seen.  Although it was something of a commercial flop in its day, which led to the studio closing down, we championed it a lot.  Even if that meant comparing it favourably to its more famous peer Skyrim.

But even factoring in how good it was we were very surprised when the game got a remaster for last gen consoles back in 2020.  And eight years after it first wowed us, we found ourselves loving Amalur all over again.  Time hadn’t cheated our memories.  The game was still fantastic to play.  Filled with RPG depth but without becoming tedious and still affording us that fantastic, varied combat that lets you combine melee and ranged attacks while dropping in magic on the fly too. 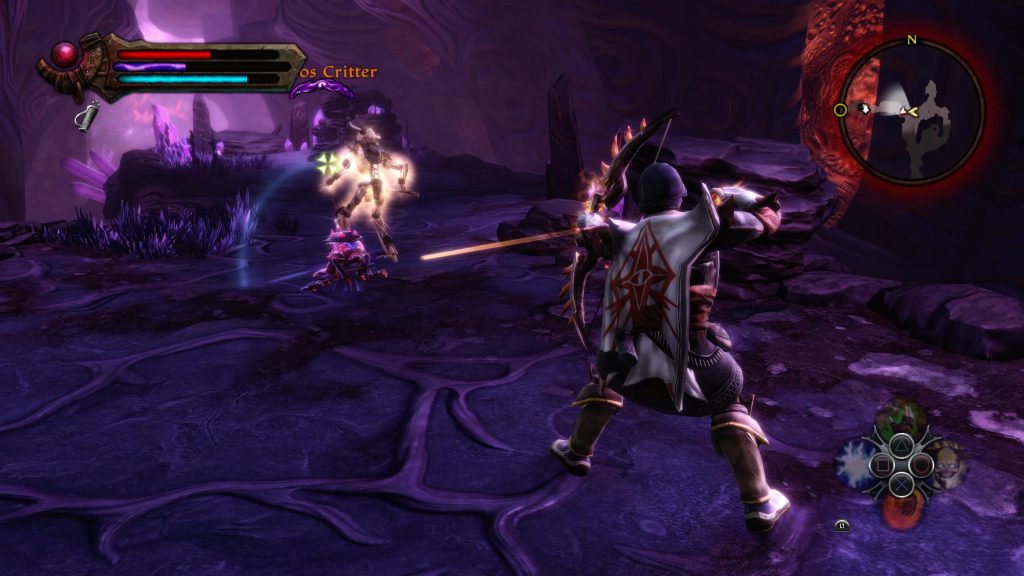 As surprising as the remaster was, we were shocked when they announced Fatesworn.  A legit DLC expansion which adds a whole chunk of post-endgame content.  As with other Amalur DLCs, Fatesworn opens up a new part of the map.  You will need to have finished the story of the main game to access it but when you do, you’ll be able to make your way to Mithros, a new mountainous region that is under threat from Telogrus, the self-proclaimed God of Chaos.  Where Amalur was all about Fate, Telogrus wants to destroy all that and replace it with Chaos.  Something that threatens everyone in the kingdom including you, the fabled Fateless One.

If you’re anything like us, you’ll get cracking onto a mixture of main and side quests and, as with the main game, Fatesworn proves itself to be quite the time sink.  But initially we weren’t too sure about this DLC.  The first issue is in trying to get back up to speed with the main game’s mechanics.  Sure, the combat is still intuitive and excellent, which means that you’ll still be able to kick arse.  But there’s all the other stuff.  The crafting of new weapons and armour, the mixing of potions and all that tricky stuff with the gems.

So finding our way back into that was tricky.  Especially because the DLC gives you so many side quests to get on with (almost forty in total) that for a while you can ignore all of the trickier mechanics of the game.  We were frustrated with the fact that all the gear you could loot or buy was nowhere near as good as the stuff we’d crafted back in the main game.  And so really it was starting to feel a bit samey. 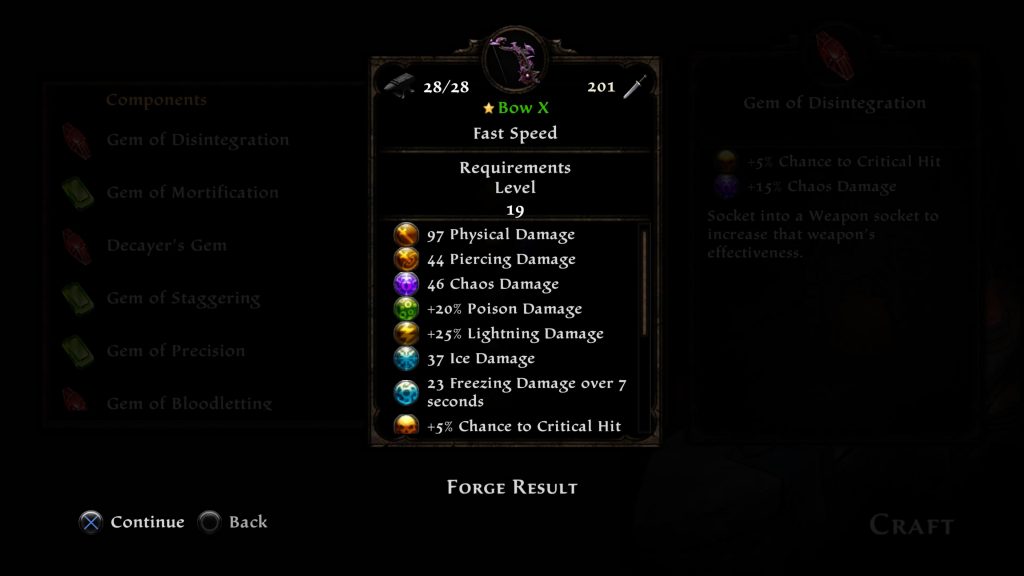 But when you get into main quest, these problems go away.  To weaken Telogrus you need to destroy the various Chaos Portals that litter the land (both Mithros and the rest of the kingdom).  These play out a bit like the Daedric Realms from Oblivion.  Before you can enter the portals, you need to take out the heavily guarded rifts that surround them and then you need to destroy the portals from within.  As with those Daedric Realms, these end up being small dungeon-crawling levels.

These sections generally up the difficulty, which is good because for a while you are overpowered out in the world.  The enemies in the Portals are protected by Chaos Armour that can only be destroyed by weapons that can do Chaos damage and so you’ll need to start crafting the right weapons to do that.  It takes a bit of figuring out to get back into all that but we loved the crafting system in Amalur and still do.  So, we had a lot of nerdy fun breaking down all the useless weapons in our inventory and using the bits to craft some properly powerful new ones.  Every time you take out a Chaos Portal, you’ll actually earn the ability to create better Chaos weapons too.  So you’ll be revisiting the forges a lot as you keep powering up. 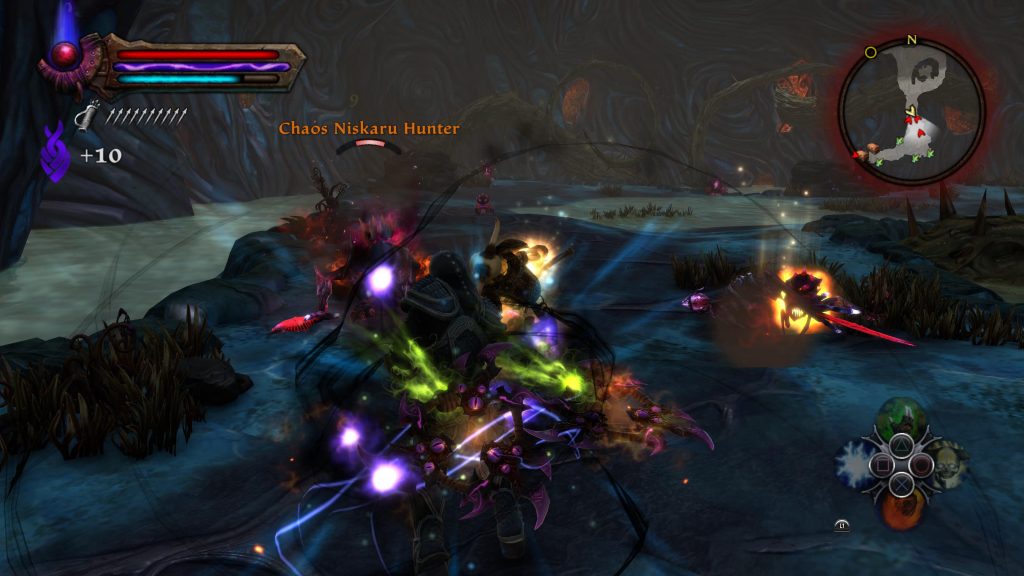 There’s a lot of game here.  We put in almost 90 hours into Kingdoms of Amalur, and we’ve done at least 15 on Fatesworn.  So you’re getting a lot of bang for your buck here.  That said, getting to and unlocking the Chaos Portals can feel a bit repetitive and the layouts of the Chaos Realm dungeons feel almost random in design even though they aren’t.  There’s a lot of backtracking and trying to find switches and after a while it can get a little bit tedious.  There’s 25 of these Portals and you’ll probably be bored of them after the first three unless you really like upgrading your weapons.

The DLC has a similar presentation to the main game which means you’ve got huge, detailed landscapes that are well-designed and colourful but the character models do all have the chunky look of the Saints Row games, falling somewhere between realistic and cartoony without really achieving either effect.  There are new pieces added to the game’s already impressive score though and, as ever, all interactions with characters are given full voice acting, so that’s good. 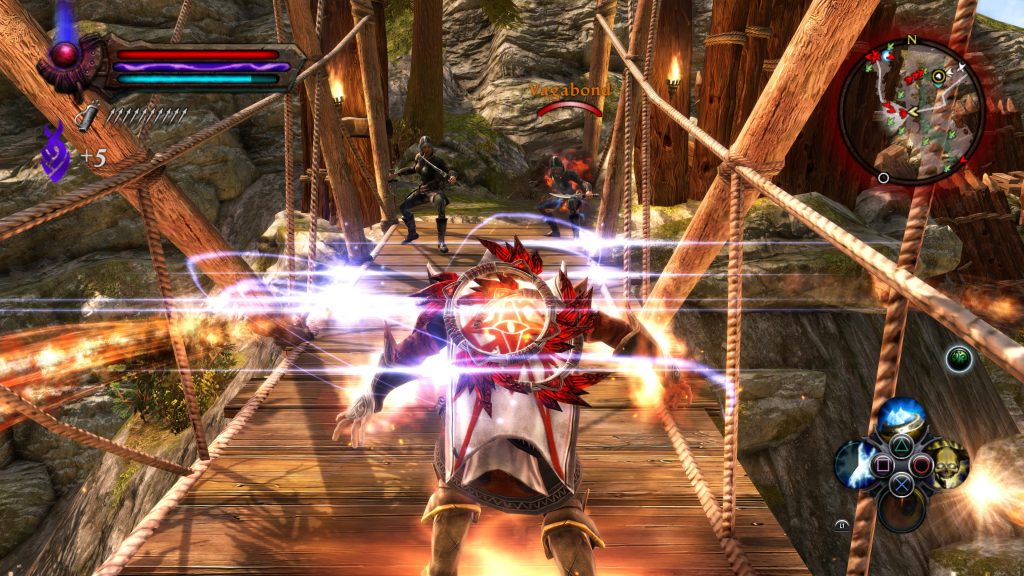 The main knock though is that this DLC is subject to quite a few technical issues.  We found the game crashed on first loading almost 50% of the time, leading to us having to relaunch it.  There are also in-game crashes too, issues with certain trophies, graphical troubles, landscape issues (we had to restart because a path had become blocked by an invisible wall and then the floor disappeared) and long loading times.  And there were some gameplay niggles too such as unclear quest objectives and internal locations where the map screen wasn’t useful because of how this game handles multiple floors.

But none of that is game-ruining and the overall quality of Amalur still shines through and this DLC gives you a big chunk of gameplay to be getting on with.  The RPG elements still work well, the story is reasonably engaging (I mean, all RPGs recycle each others’ tropes) and the combat is still fantastic.  The fact that you have to finish the main game means that this really is only for reasonably die-hard Amalur fans though as opposed to the players who picked up the main game when it free recently on PS+ but that means that if you finished Amalur and loved it, then this DLC should be for you.  And at £15.99, you get a lot of extra Amalur.

Summary
We loved the original Kingdoms of Amalur a lot and so having an extra 20+ hours of unexpected DLC is a real treat but if Amalur wasn't for you, then neither is Fatesworn.