Alwa’s Legacy comes from Elden Pixels after a successful kickstarter and a 2020 PC release. It was well received for its focus on exploration and interesting tweaks on player traversal. Metroidvania’s might be commonplace on game stores but it’s been a while since one strayed across my path. Thankfully, this seems to strike the right notes. 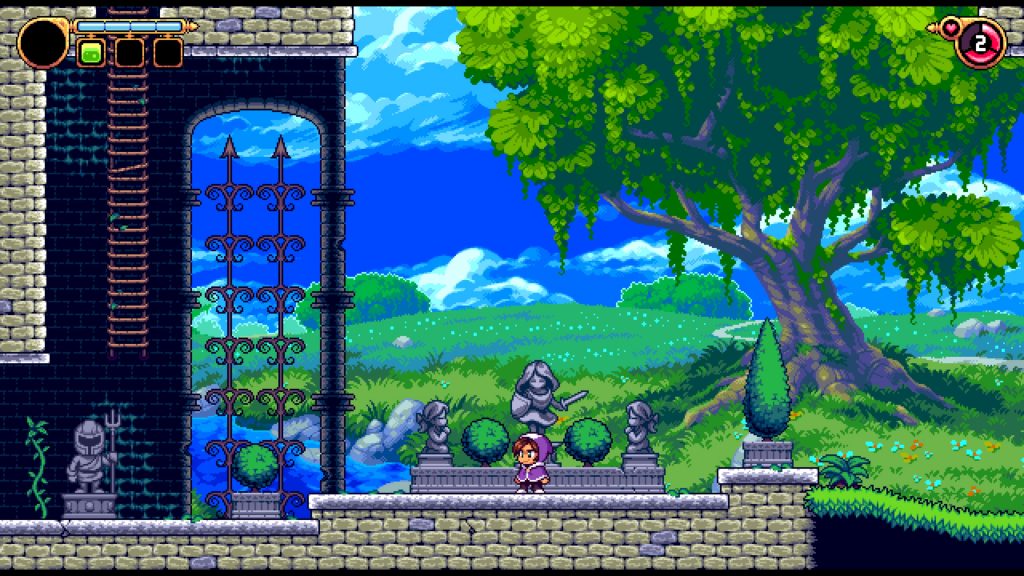 The plot couldn’t be more basic. Zoe’s a girl with amnesia and, with the help of the nearby townsfolk, she has to recover her magical powers. It’s not too long before an evil vicar turns up to ruin your day and your task is to defeat him once you have your mojo back. There’s not much else to it but the incidental writing has some charm to it. It’s light-hearted but not too thick with the quips. It’s not really where Alwa’s Legacy’s focus lies and it does tend to vanish into the background.

Alwa’s Legacy really prioritises exploration. If the graph paper map doesn’t give it away, this game pays serious homage to Metroid and Castlevania formula. There’s no shortage of these in the market nowadays but I do love it when a good one comes along. The world of Alwa is segmented into different biomes. Each corner of the map has a boss to conquer and, whilst it initially looks daunting, traversing the world can be done quickly.

The map is very good at highlighting potential paths and there is a accessibility options that show save points. Helpful if you need to save in a hurry. Zoe’s movement is fairly fluid and you’re given the three tools for traversal in the first act. You gain a block you can stand on, a bubble you can float with and a lightning strike which aids in combat. As you progress, these abilities can be upgraded to make movement even easier. 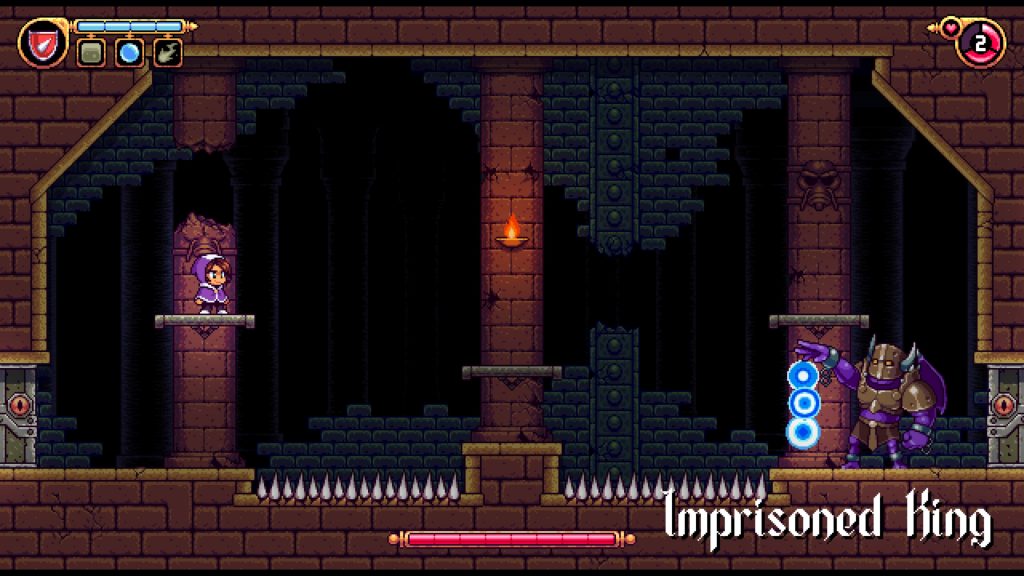 It’s handy to get these abilities early and it really showcases how well the level design leans into these options. You can combine these tricks to reach new places and it really makes those gems feel useful. What you’re finding out in the world is orbs to upgrade your gems and tears to make potential warp points. You also have petals to find which can increase your overall health. Everything feels very complimentary and no ability feels useless. Movement is enjoyable and backtracking hardly feels like a chore.

In addition to this, there are some side-quests that characters will dish out. It leads to world that feels packed with things to do. It’s not all necessary but it really encourages exploration and rewards discovery. Most of the vendors sit within a central village and you do find shortcuts to the other areas. It leads to a game that seems to flow very well. 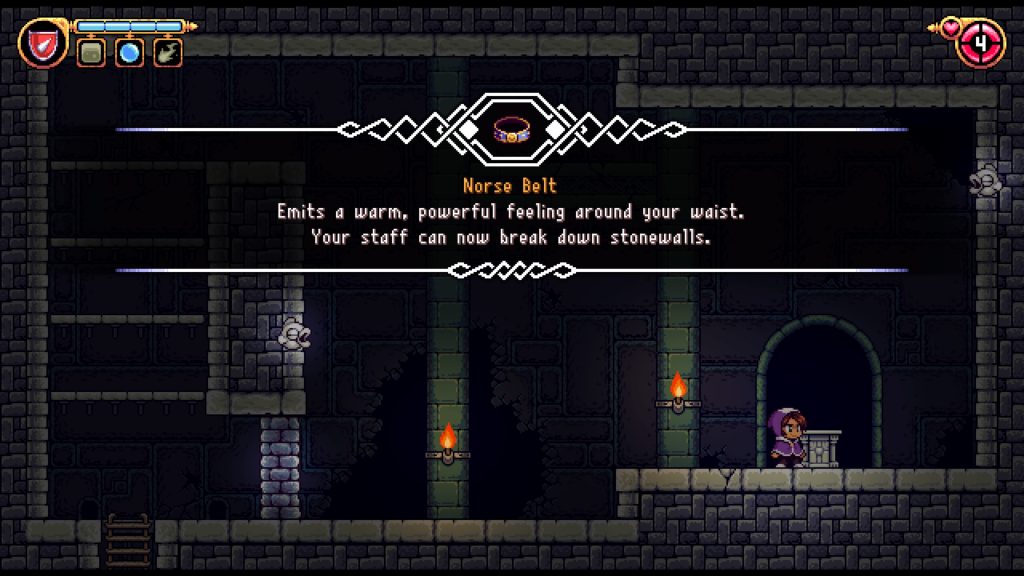 Combat feels basic. Your staff can be swung to deal damage and I find most of the enemies to be minor nuisances as you venture from room to room. Most will die in a couple of hits and you do have a lightning spell to strike from range. Nothing seems overly complex with even the bosses feeling simple in concept. These fights lock you in an arena with foes that will typically take eight hits to vanquish. As such, they’re not tests of endurance and their patterns are recognisable. They might take a little bit of practice to defeat but they’re not insurmountable. The one thing I’ll say is that the combat upgrades do help speed these fights up. It never becomes something more complicated and reliant on execution but it does transform over time.

Alwa’s Legacy has a really stellar soundtrack. It’s a chip tune score that feels really catchy. Each area has their own track and I find it hard to pick a favourite. I haven’t spent enough time in each area to find them outstaying their welcome but find myself humming along fairly frequently. Sound effects feel more functional as they give off cues for magic refilling and bubbles popping. These games try for a very specific aesthetic and largely achieve it. 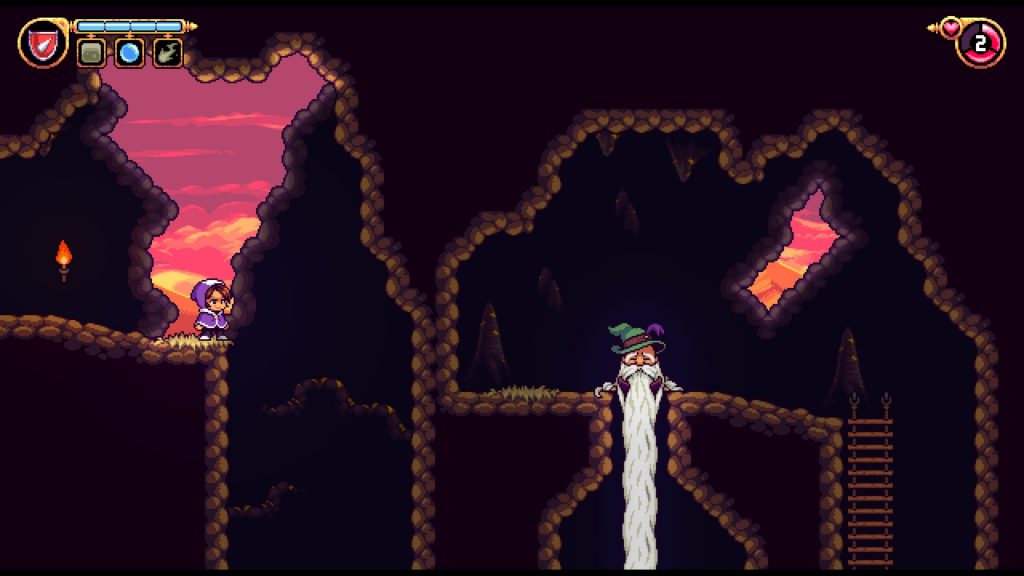 Visually, the pixel art on display is strong. Each area feels varied and, whilst it can begin to look dull underground, the outside areas have some incredibly detailed backgrounds. It’s a shame I’m so focused on the foreground because the intricacy in the distance is really nice to see. If you’re already sick of pixels, this won’t do much to change your mind. For me, it all seems to fit well.

As a package, Alwa’s Legacy works wonderfully well to deliver an interesting adventure full of exploration. The pixel art might wear some people out but the detail and intricacy of the backgrounds are worth seeing. The real star is how traversal is handled. Moving from room to room has a momentum to it that keeps things moving swimmingly.

Alwa's Legacy
8 Overall
Pros
+ A really strong focus on exploration.
+ Movement feels fluid and adds a good sense of momentum.
+ A really catchy soundtrack. + Incredibly detailed pixel art, especially in some of the backgrounds.
Cons
- The map isn't particularly detailed which can lead to moments of getting lost.
- Plot is fairly light. It doesn't lend a lot of weight to the adventure.
- Combat is always kept fairly basic. The more interesting abilities tend to favour traversal.
Summary
Alwa's Legacy is incredibly well done. Whilst the story can bleed off into the background, the real joy is taken from discovering new items and locations. Your abilities come quickly and it really allows you to move through the world at a decent pace. They compliment each other well and give you options to get from one spot to another. The music and pixel art is top notch. The score is catchy and the background art is really sharp. Overall, it's a pretty accomplished adventure.