The Way of the Samarai series is not one I’ve ventured into. The Acquire developed action titles just haven’t crossed my path but Katana Kami: A Way of the Samurai Story is a diversion from the usual path. An isometric dungeon crawler, this effort looks to satisfy some loot lust whilst offering an interesting, if a little slim story. 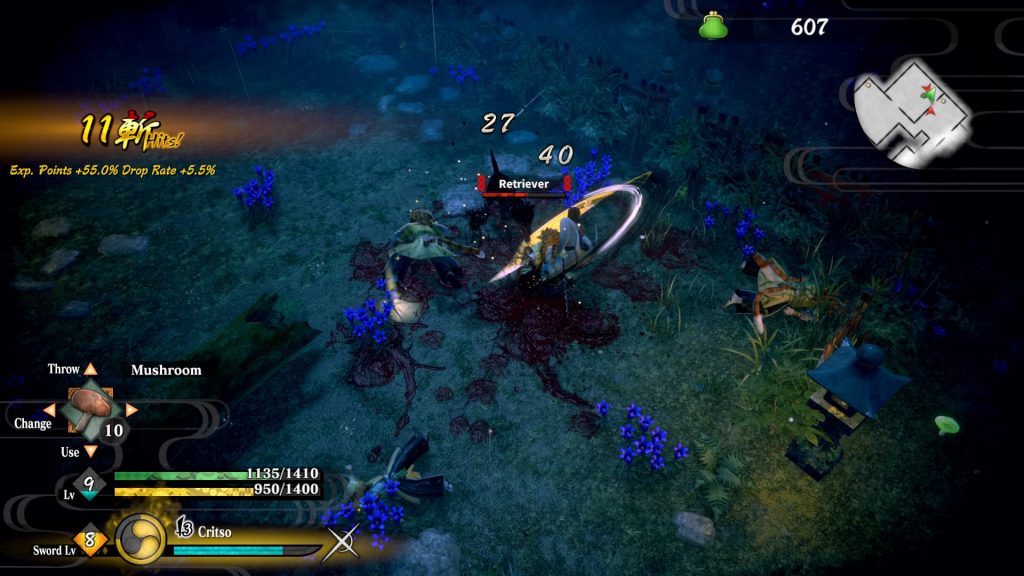 The tale begins in a straight forward manner. Our nameless hero wanders into Post Town as the blacksmith’s daughter is being taken away. She’s being used as collateral whilst Dojima, an ailing craftsman is up to his eyes in debt. You offer your services to him in exchange for his daughter’s hand in marriage. It’s an abrupt beginning but it does set the stakes high. It doesn’t expand beyond that but there are some trinkets of lore along the edges that at least give the world a little more colour.

I’d describe Katana Kami: A Way of the Samurai Story as compact. There’s little expanse to the game’s world but they do offer depth within the combat and time outside the dungeon. You can brainlessly hack and slash your way to success but there’s a lot of emphasis on systems and these all play a key role. Your sword levels up through use and, as it ages, you gain additional moves to try out in combat. You can block, break guard and there’s a parry system which can really be fun to master. 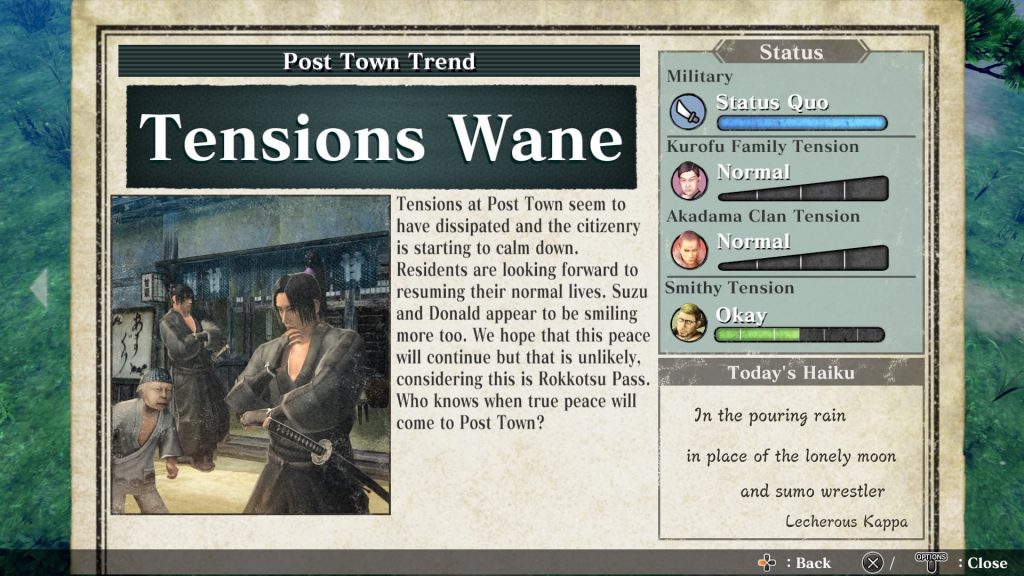 A well-timed block or dodge can deliver a damaging counter. With your weapon gaining experience from each kill, the sword gains orbs which can then be cashed in form some devastating, consequence-free hits. There’s a lot to dig into and each slain foe drops their weapons. The loot never feels superfluous as each one can be used to regain some durability, be smelted down for crafting materials or you might actually find a new favourite sword.

Away from the dungeon, Dojima opens up more services to you and you and the neighbouring clans also decide to set up shop. Dungeon crawling doesn’t appear so lucrative so, as the demands from the debt collector increase, you need to find new ways to find coin. There’s a bounty board that offers small change but your real opportunities lie with playing the clans against each other.

You can instigate tensions between them by some good old fashioned violence and offer them gifts. As the need for more swords arises, you and Dojima can get to work selling swords you’ve looted from the dungeon. You can really twist the economy to your will and it’s necessary to bring Dojima’s debt down. 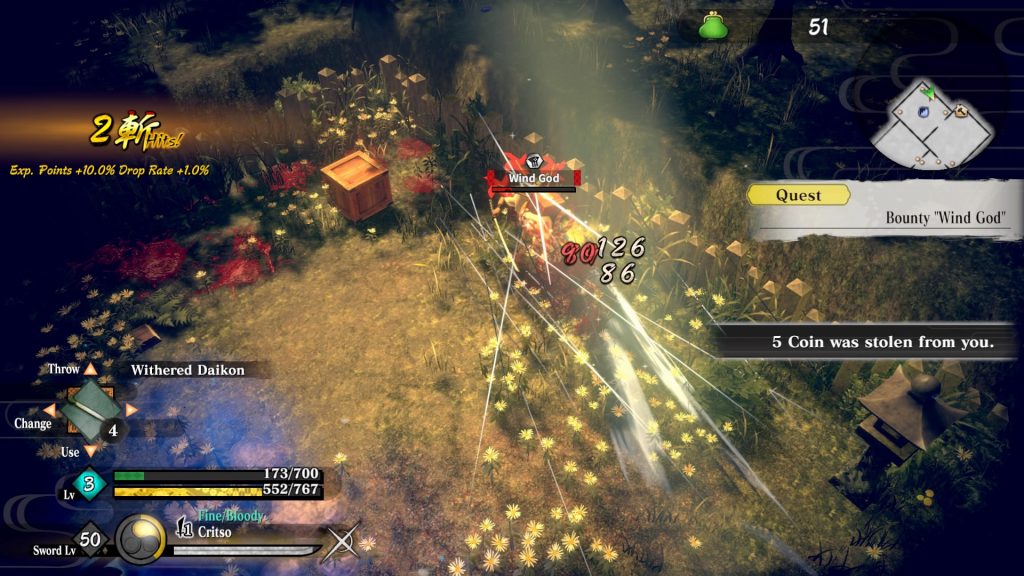 It’s a shame the game doesn’t explain these systems in great deal. You get a text explanation whenever something new is introduced but sometimes you miss out on context. For example, missing out an instalment of Dojima’s debt is not always a fatal decision. Death comes with its own problems. You lose out on everything you’ve gained, bar key items which can feel like a huge defeat. Going back through the dungeon to find something comparable to your lost gear can be trick and time consuming. This can be circumvented by keeping spares in your storage and holding money back at the safe but it’s a shame defeat can be so brutal.

There’s also the nagging feeling that the dungeons can start to feel a little stale. The initial one has twenty floors which can be brisk to play through. You traverse each level and descend further into the basement. You can uncover shortcuts and each fifth floor offers you the chance to exit. There’s a consistent layout to the place and the familiarity can entice you to venture further on. Bosses are small in number but present a challenge. They’re usually accompanied by a mob of fodder enemies and, once your sword is levelled, you can make quick work of them. It can become a power fantasy but there are further challenges in the post game.

There’s further dungeons to explore with enemies forcing you to use different tactics and behaviours. There’s also other long-term goals that lead to an extra ending. Katana Kami: A Way of the Samurai Story is, if nothing else, trying to keep players onboard. New bosses and new loot can keep you coming back but the repetition can take its toll. Online co-operators and invaders do offer you some unpredictability and a new sense of relief or threat. 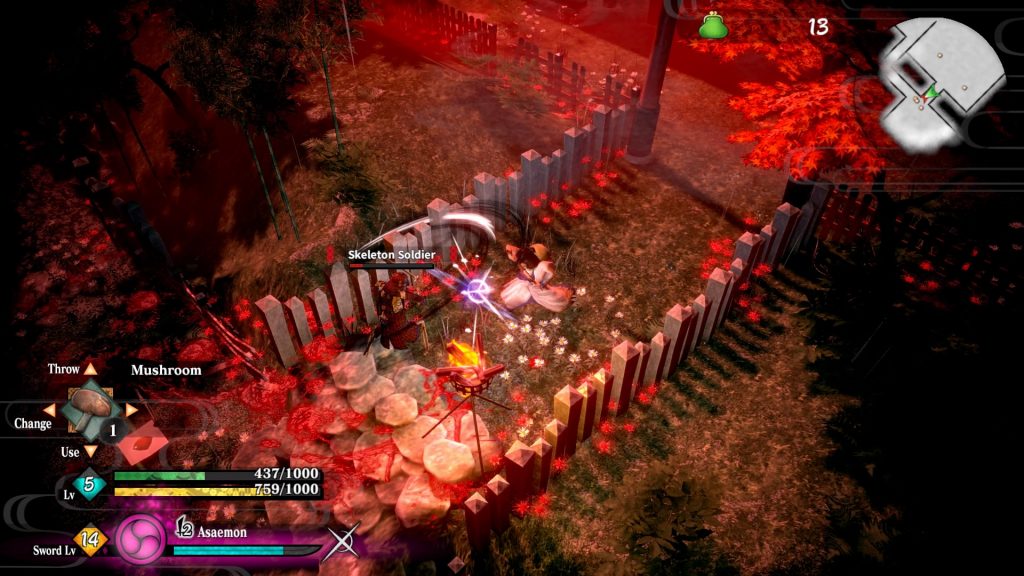 Visually, it’s fine but not stellar. The game trades in a muted colour palette that does well to show clearly where enemies are hiding and varies at certain thresholds of the dungeon. It begins in a dark stone cave, lowers into an autumnal garden and then culminates in a bloody, ominous outdoors. There’s a build to it and it does contrast with the bright world on the surface. Unfortunately, it does start to wear out its welcome. That’s born from the dungeon’s repetitious nature but you can’t escape how small this game can often feel.

Sound design is similarly underwhelming. Dialogue is usually delivered by text with enemies repeating some of the same death squeals. Things are kept simple but it’s fairly forgettable. It’s a pity when some of the other aspects have a level of polish and inventiveness to them. Katana Kami: A Way of the Samurai is a surprisingly deep effort with some interesting ideas. In presentation, it seems to stumble and the repetitive nature of the dungeons can wane your enthusiasm.

Katana Kami: A Way of the Samurai Story
7 Overall
Pros
+ A deep combat system that's engaging to master.
+ Plenty of loot to find which all has a use.
+ You have plenty of reasons to dive back into the dungeon.
+ Playing the clans against each other is fun to instigate.
Cons
- The dungeons can become repetitive quickly.
- The story is slim and presented blandly.
- Dojima's debt instalments can overwhelm you.
- The punishment for death can be harsh.
Summary
Katana Kami: A Way of the Samurai Story is fairly likeable. Despite the small shell, there's depth to uncover and a lot of systems to engage with. Combat is interesting and you always seem to have a goal to work towards. Unfortunately, I feel the dungeon's repetitiveness can outstay its welcome but the online aspects and post-game content does try to give players something else to dig into.