While Double Dragon and Kunio-kun (or even Renegade, Kunio‘s Western name) might not mean much to younger gamers, anyone who walked into an arcade in the ’80s or had one of the home computers of the era will be very familiar with them.  They were beat ’em ups, fighting games where it wasn’t just a 1 vs. 1 situation.  These were brawlers where you faced off against multiple foes at once and they were glorious games.

At least in the arcade and at home if your machine had one of the better conversions of the arcade games.  Double Dragon was a must-play coin-op in the mid-’80s where as Renegade was bollocks in the arcade but had a superlative ZX Spectrum version. 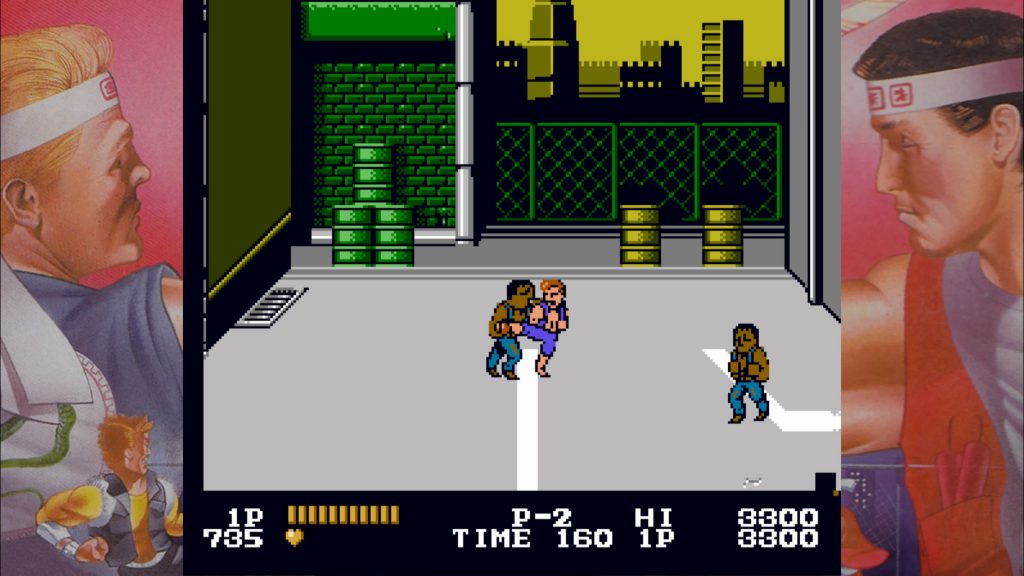 Well, Arc System works has ported across 12 games in and around the series to the PS4.  The good news is that these aren’t just fighting games.  There are various sports games in there too also using characters from the Nekketsu series and so there is plenty of variation here.  Also, we’ve got online play, customisable controls and even some enhanced versions which remove lags and glitches.  It’s all quite something, especially when you realise that a lot of the games have been localised for Western audiences for the first time.  That’s a very, very cool feature.

But there is a big downside too.  These are all the NES/Famicom versions of the game and, if we’re being honest, that’s weak sauce.  While the NES wasn’t quite as bad as the Atari machines that were around in the ’80s, it’s just so ancient that many retro gamers see it as a bridge too far.  Don’t agree?  Well, look at the reaction to Nintendo’s Switch Online service which launched with a bunch of NES games.  No one wants that shit.  We want SNES.  And we don’t even want that if arcade ports are available.  But, it’s all NES here.

That said, it is an opportunity to really check out games that we wouldn’t even bother emulating and it’s not actually all bad.  So rather than waffle on about the compilation itself, let’s look at the games on offer. 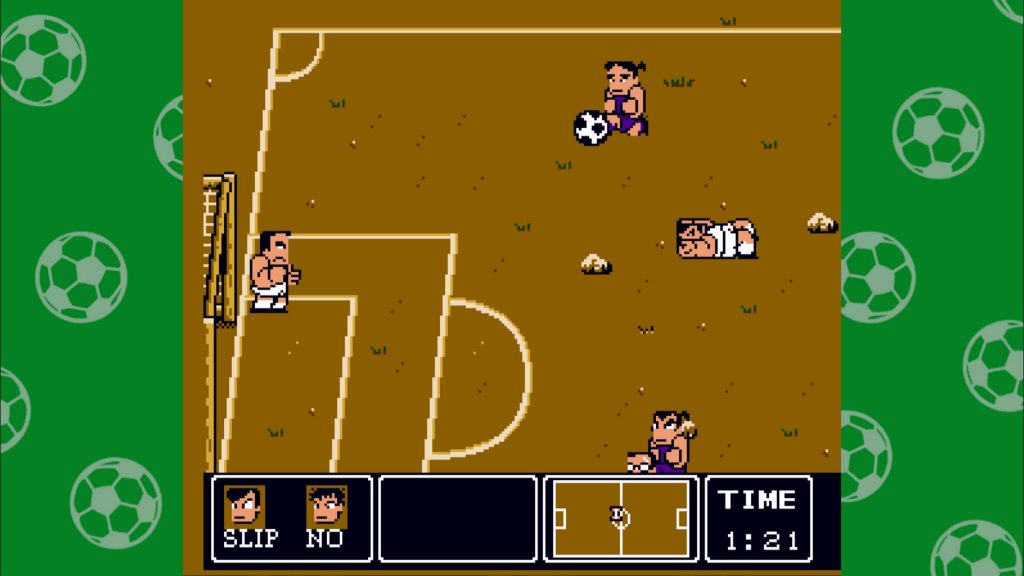 Double Dragon – this isn’t a bad conversion of the arcade classic.  The visuals suffer a lot and the tiny sprites feel like a compromise but this is fairly playable.  Not one that we’d come back to too often but not too bad, especially as worse machines than the NES got way worse conversions of this one.

Double Dragon 2 – this one takes the original and mixes up the gameplay a little with more moves and some 2D sections.  It does have a button for each attack direction (left and right) which gets pretty confusing.  But it’s okay and visually it’s a step up from the first game.

Double Dragon 3: The Sacred Stones – this might be better than Double Dragon 2 but it’s far too difficult for us to persist with.  It’s kind of uglier too.

Renegade – given that Renegade on the Spectrum is one of our favourite ever games, it’s a shame that we don’t like this one more.  Again it has the two directional attack button set up from Double Dragon 2 and it’s a bit difficult later on.  The maze layout of rooms towards the end is no fun and the boss battles can be an abysmal chore too.  It is fairly playable though.

Super Dodge Ball – baffling, unenjoyable game based on a sport that doesn’t translate at all well to videogames.  We may have given up on this early but it seemed quite terrible.

Nekketsu High School Dodgeball Club – much like Super Dodge Ball.  Not any fun from our point of view.  Your mileage may vary.

River City Ransom – this game has always had a good reputation and it’s definitely the best brawler on this compilation.  It feels fast and slick and the graphics, despite the overall NES-ness, are cute and charming.  The game has some depth too with weapons and special moves that you can buy.  Very cool.

Downtown Nekketsu Story – Japanese version of the above.  Translated to English though.

Street Challenge – a short multi-event sports game with some sketchy controls but is a bit of a step up visually from the fighting games on here.  Not much fun though.

Suprise! Nekketsu New Records! The Distant Gold Medal – Japanese version of the above.

Downtown Nekketsu March Super-Awesome Field Day! – as above but different events.  Quite creative but still a bit of an effort to play. 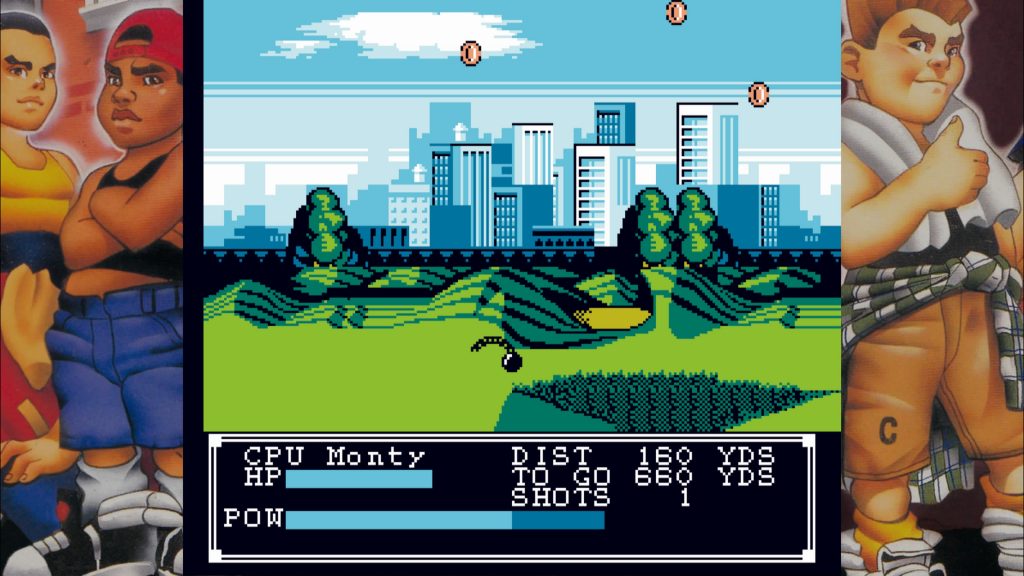 Kunio-kun’s Nekketsu Soccer League – much the same as the above but with more options such as weather changes and ground condition.

Downtown Special Kunio-kun’s Historical Period Drama! – we have no idea what the hell is going on here.  It appears to be some sort of side-scrolling adventure game but with no actual manual it all seems a bit random.

Go-Go! Nekketsu Hockey Club Slip-and-Slide Madness – similar to the football game above except this is a 2 vs. 2 hockey game.  Inconsistent shooting and clumsy controls make it less fun than the football version though.

Nekketsu Fighting Legend – interesting 2 vs. 2 fighting game.  Feels much like the Renegade games but in an arena set up.  Is pretty hectic but does feel like a proto-Smash Bros at times, for better or worse.

Nekketsu! Street Basketball All-Out Dunk Heroes – an odd 2 vs. 2 basketball game with fighting elements.  Shooting feels a bit based on luck and sometimes the AI can get away from you by scoring multiple baskets because it is hard to judge where you are because of the dodgy perspective.  Kind of fun though. So, overall this is a very unusual compilation that will be an absolute must-buy for fans of the NES originals, especially those who have been waiting for a localised version.  Everyone else might find this all a bit too dated.  Some of the games are incredibly difficult (although you do have a quick-save option to ‘cheat’ your way through.  But the lack of proper instructions is annoying and the games are a very niche selection.  We’re scoring this one between what fans will think and what the average gamer will but, more so than ever, your mileage here may vary.

Double Dragon & Kunio-kun
6 Overall
Pros
+ Lots of games
+ Some games are translated for the first time
+ Online play
+ Fans of the games will love the treatment
Cons
- NES versions only
- These games are around 35 years old and feel like it
- Very niche
Summary
If you want twelve old NES classics treated with respect then this will be a must-buy. Gamers who didn't play these games back in the day may find the quality of the games to be to hard to swallow.