It’s another day in the visual novel dungeon for me and this might be the first time a direct sequel has landed in my queue. Kansei: The Second Turn HD is the middle chapter of Sakevisual’s Green Tea Line narrative. Following on from Jisei: The First Case HD, our nameless protagonist has a mystery to solve in a locked down location. It doesn’t deviate much from the first tale but it does seem better executed and a touch more substantial. 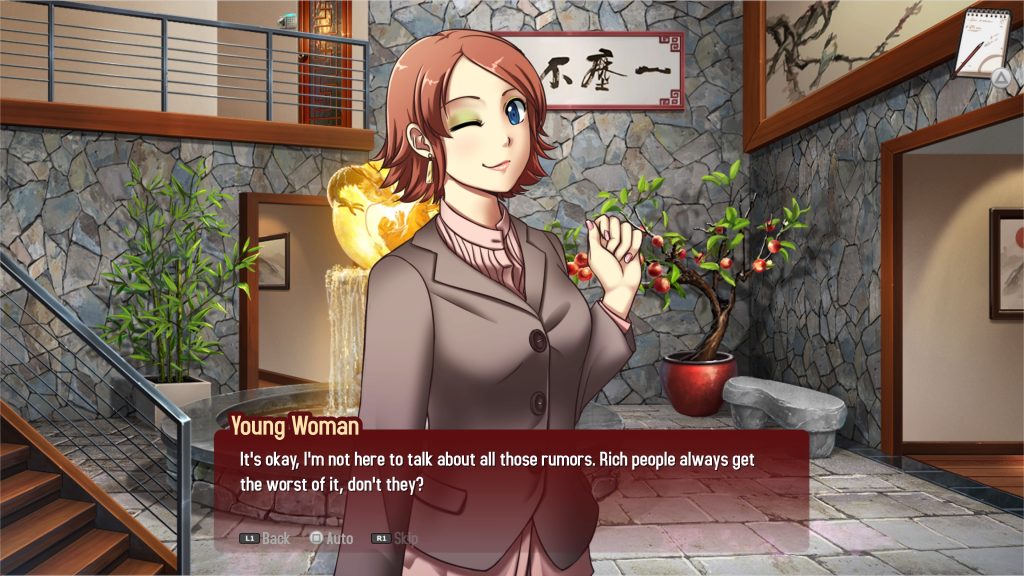 Our nameless hero is now working with some other gifted teens and handled by Detective Gurski. Hot after the last murder case, the crew is set to visit William Auten, the head of the pharmaceutical giant who was at the heart of Jisei‘s industrial espionage. On the ride over, there’s a chance to introduce the new faces and explore what their quirks are. Mr. Auten’s home is lavish and it doesn’t take long for the place to become a crime scene. I found the plot of the first game intriguing and it is followed up successfully. There’s plenty of dirt to uncover, numerous red herrings and it makes the mystery feel nuanced.

Once the murderer strikes, the home goes into lockdown and your detective skills begin to be put to the test. The loop is untouched from the predecessor as you question suspects and explore the house for clues. When you walk into a room you can talk to people or examine your surroundings. Characters do occasionally move between rooms but they largely confine themselves to one part of the house. This means you spend plenty of time wandering around. 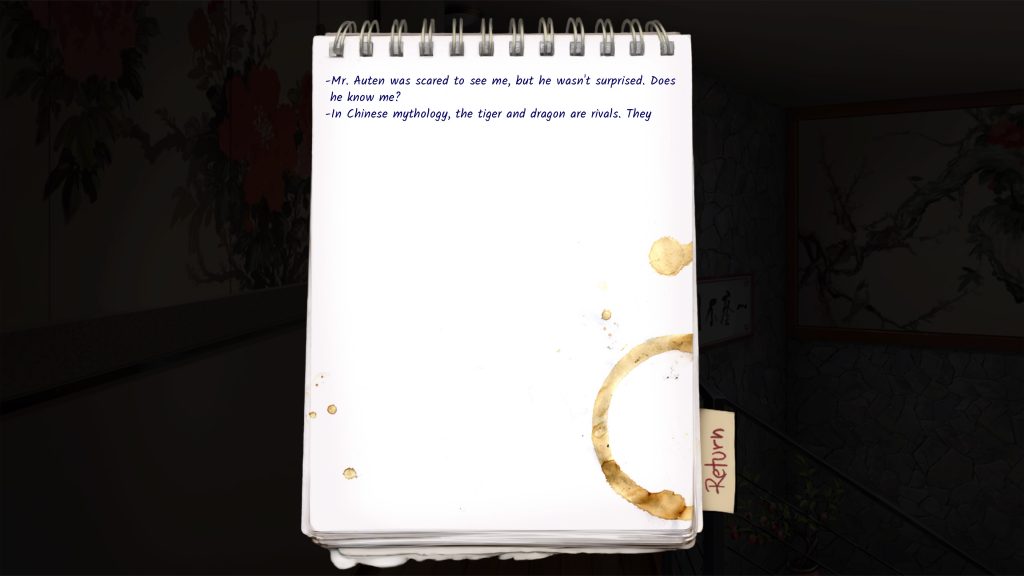 The larger cast and locale does make Kansei: The Second Turn HD feel more substantial. It’s not much longer but, with more people comes more conversations. It also leads to more suspects. You keep track of clues in a notebook which does a good job at hinting where to go next. Investigations require a fair amount of legwork. Each suspect tends to confine themselves to a room so you will spend some downtime travelling between rooms.

I did find the flow stifled when I was hitting dead ends but it’s few and far between. Finding out new motives and new information is satisfying, although it does come to a conclusion relatively quick. There’s twists and revelations that do lead to repeated playthroughs. Much like the first game, there’s more than meets the eye here and there’s many viable suspects to point the finger at. The handful of endings vary quite a bit and definitely wet the appetite for the third episode. 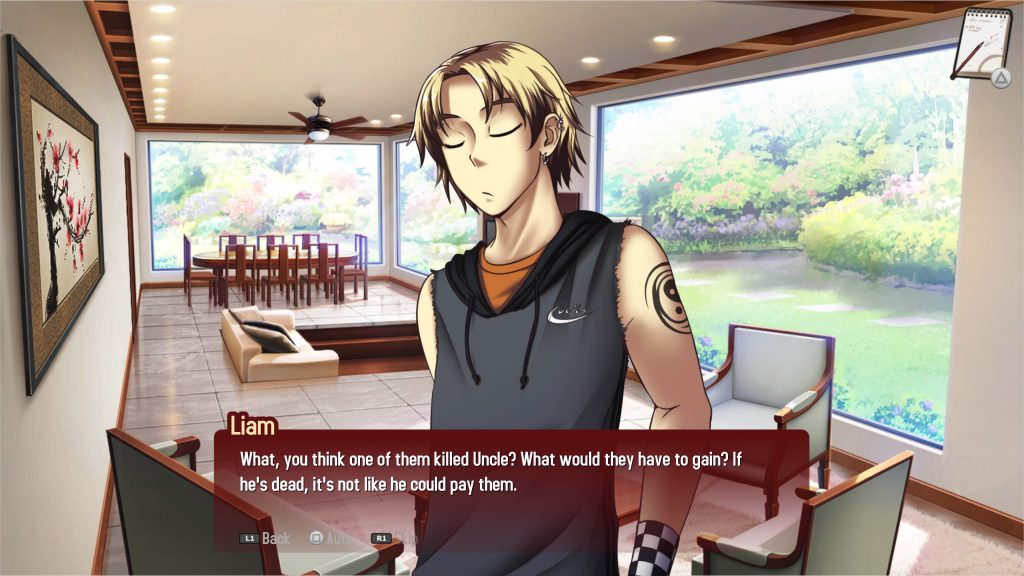 Having examine and move as two separate options can slow down proceedings too. By default, the pointer is slow and, whilst you can use the directional pad to pick options, hunting for specific details in a room can feel occasionally clumsy. Especially if you haven’t picked up on something in a room you’ve visited countless times. That said, I wasn’t held up for long.

The presentation works really well. I know it’s only dealing in 2D art but it does look really sharp and striking. The character portraits are really detailed and portray plenty of personality. The only exception being the two siblings, Aki and Kizaki. They wear identical outfits and have similar haircuts. If they weren’t fully voiced, I’d struggle to tell them apart. 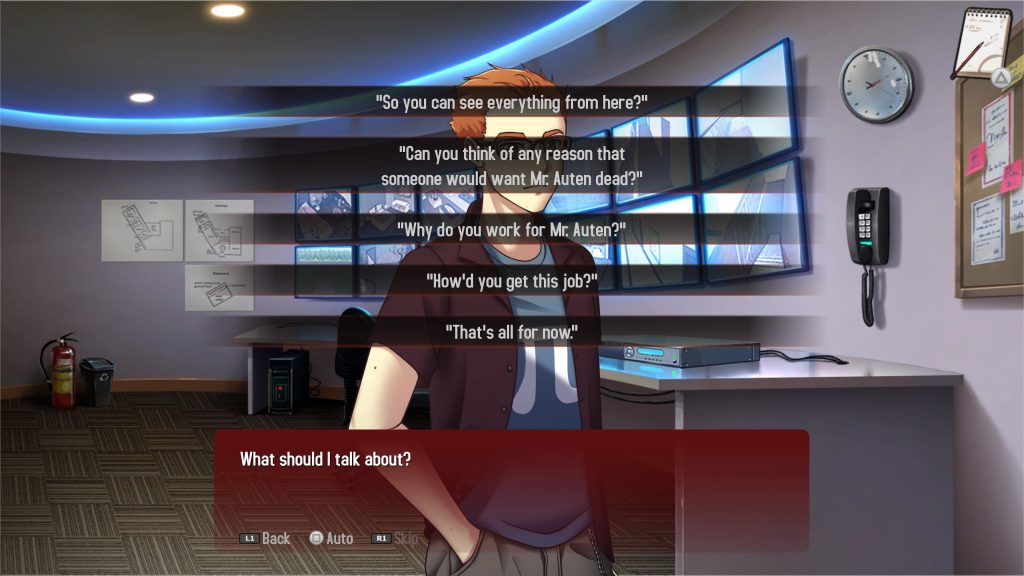 These performances are well done with each character feeling distinct. Marisa acts like a journalist eager for a scoop whilst Liam acts every bit of the privileged rich kid he is. It really helps sell them as people and keeps me engaged more than I would be just reading text. The accompanying music stays largely relaxed. It’s a piano score that would probably feel at odds with a criminal investigation but suits the general pace of the game. It’s not especially memorable but doesn’t feel unwelcome either.

Kansei: The Second Turn HD does manage to build upon the first game. The predecessor felt like an introductory chapter that was over far too swiftly. With a bigger cast to play with, there’s more questions to ask and more clues to uncover. You’re spending more quality time doing to detective work and I do appreciate that. It still concludes fairly quickly but there’s more packed in the short runtime.

Kansei: The Second Turn HD
7 Overall
Pros
+ Continues well from the intriguing plot of the first tale.
+ A larger cast makes for more avenues of investigation.
+ Really striking, sharp artwork.
+ Solid voice-acting.
Cons
- Another short affair that seems to rush to the conclusion.
- The interface can occasionally hamper the flow of the game.
- Two of the characters are almost indistinguishable.
- Having the cast scattered about the house does lead to some unnecessary legwork.
Summary
Kansei: The Second Turn HD expands nicely on the groundwork of the first title. The intriguing plot continues to impress with some nuanced character work and some good voice acting. It's still a little short for my liking but the other endings make a replay worth it. The art is nicely made with a real sharpness to it and the leisurely piano score give investigating a relaxed pace. It's a pity the interface can sometimes feel sluggish and hamper the flow of proceedings. Still, I enjoyed it and I'm keen to see how the series ties up.