We shouldn’t need to tell you what Breakout: Recharged is.  Aside from the screenshots which give it all away immediately, the original Breakout is really one of the cornerstones of classic gaming.  Space Invaders had the shooting covered, Pac-Man was the mazey collect ’em up and Breakout was the classic bat and ball versus wall game.  The natural evolution of Pong but with the wall acting as the enemy for a more satisfying single-player experience.

But, for any discerning retro gamer, games in the bat and ball genre to most of us now are known as Arkanoid clones.  Taito’s reinvisioning of the genre was such a step up that everything since must be compared to those.  The clever level layouts and varied power-ups took things to a whole new level and ensured that the Arkanoid games were simply playable but insanely addictive.

That said, the Arkanoid series hasn’t been up to much for a while.  We vaguely remember an outing on the Xbox 360 but that wasn’t anything to write home about but in that time Atari (if that’s still a thing) have managed to get another Breakout game out, namely Breakout: Recharged.  It comes to us from Adamvision Studios, the small coding team headed up by Adam Nickerson who has been busy bringing other Atari properties like Black Widow, Asteroids, Centipede and Missile Command to modern platforms. 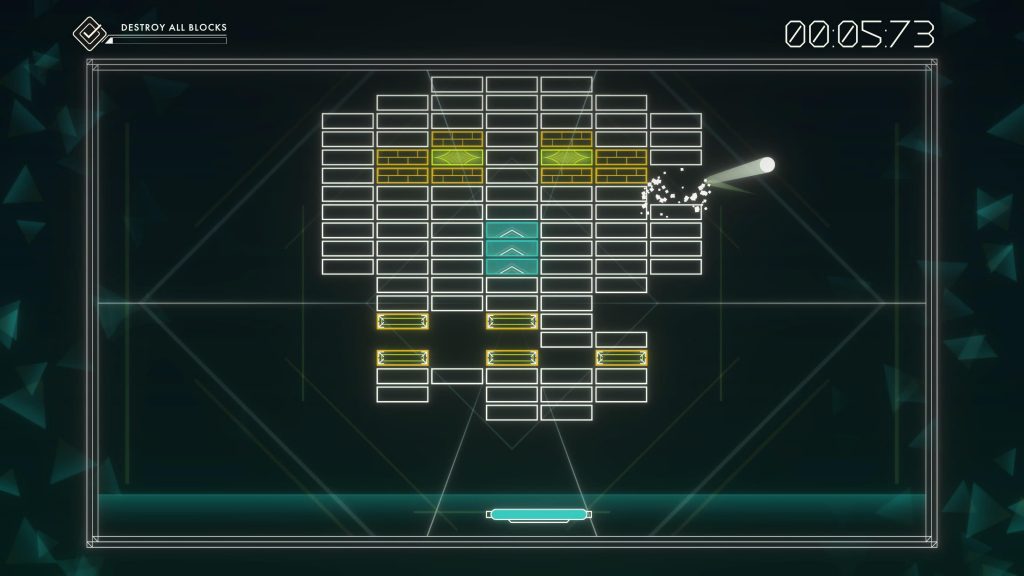 But the main meat of the game comes from the Challenges mode.   Here you get 50 challenge stages, each with different layouts and objectives.  They’re all reasonably short with most taking less than a minute and none really taking more than three.  Here you’ll face regular blocks, armoured ones, ones that shoot you and others that expand into more blocks when hit.  Some stages just require you to destroy them all while others keep adding blocks until you meet other conditions. 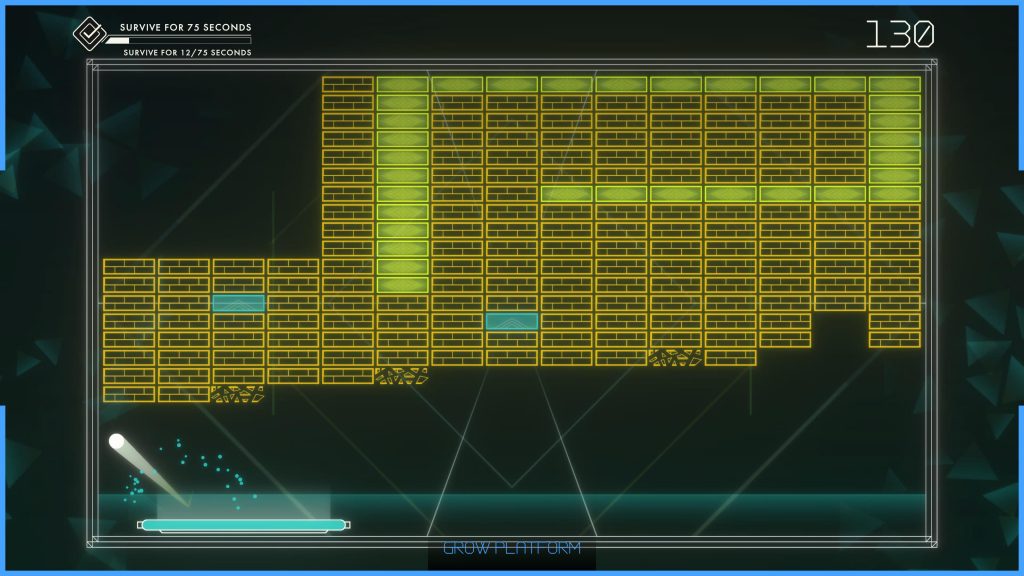 For a game that likes to talk about how difficult it is, we found the whole thing quite merciful in terms of challenge.  A few stages required a few restarts to get it right although for a while the game was impossible to beat until it was patched earlier today (funny how nearly none of the other reviews noticed that).  Once the patch landed and the ‘Juggler’ level was fixed, it didn’t take a huge effort to get to the Platinum.

Along the way though, we found this game to be quite enjoyable.  The controls are super simple, you only use the left stick and you only move that left and right.  Everything else is automatic including any weapon power-ups you might unlock.  Oddly, for a game with other accessibility options, you can’t use the right stick or even the d-pad.  Then it’s just a case of lining up your bat with the ball whenever it returns to the bottom of the screen.

This is a game that is mostly about skill but luck does play a part too.  You control the direction of the ball based on where it hits your bat.  If it hits the edge, it’ll fly off at a sideways angle where as hits to the middle will return a more vertical ball.  Accurate physics aren’t really in play here so you do get more control that you should.  However, luck affects things.  Hitting the corner of a brick can return the ball at an angle you aren’t anticipating while enemy threats such as bullets can be a real issue if they line up with the ball.  At that point you pick your poison, miss the bullet or miss the ball.  Either way that’s the end of that run.  However, it never really feels unfair.  Be it a little bit of bad luck or, more likely, a bit of bad timing or judgement mistakes usually feel like something that was your fault and the quick restart times mean you’ll be on your way to rectifying your mistakes before you’ve finished processing what went wrong. 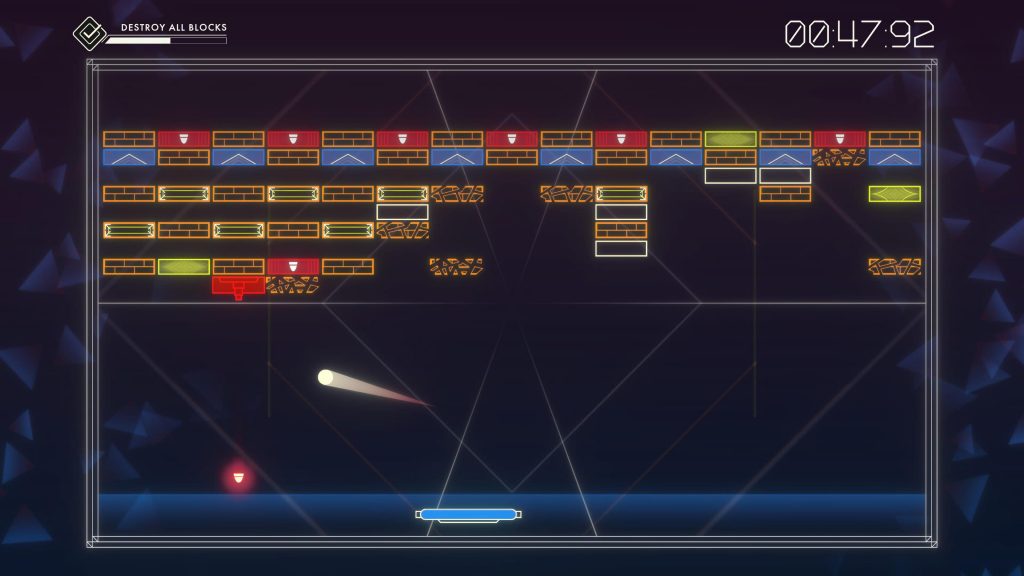 The classic gameplay is intact as you’d expect with new additions coming from the power-ups.  We’ve seen offensive power-ups before and you get those here with bullets and homing missiles but you also get a tricky aiming power-up, a time warp that slows time as the ball gets lower down the screen, exploding balls, a power-up that splits the ball three ways and one that makes the bat bigger.  These are all temporary but are definitely essential if you want to get through all those challenges.

But look.  None of this is particularly new to the genre.  Arkanoid arguably did it all better back in the ’80s but Breakout: Recharged is actually pretty good.  The challenges were fun and addictive with them being short enough to temper the fact that there are fifty of them.  Decently skilled players will have beaten everything the game has to offer in four or five hours and then they can battle for supremacy on the online leaderboards (although annoyingly these only show your score in the middle of five, so you can’t see any scores that place three or more spots above you). 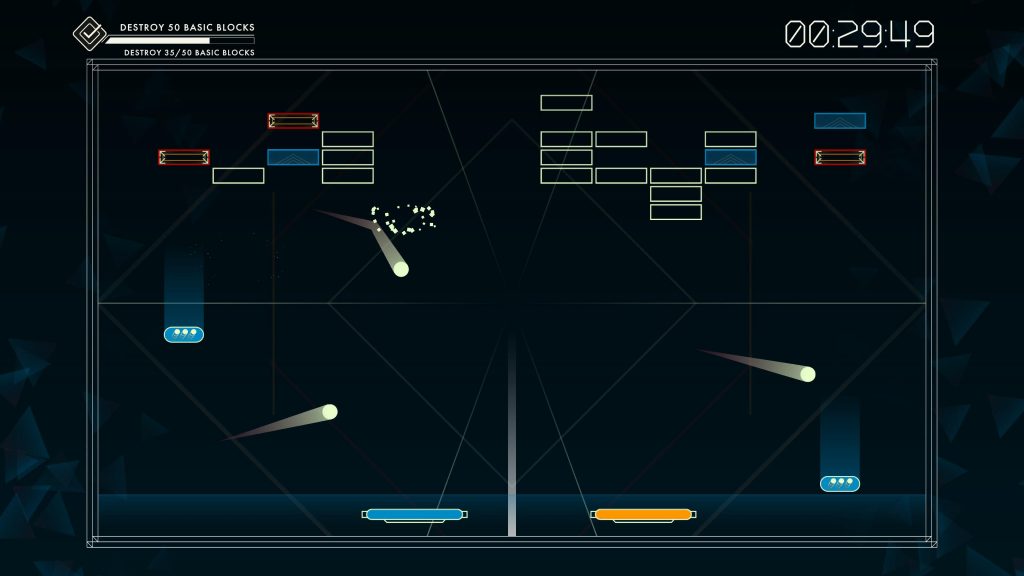 Visually, it’s not the prettiest game.  Arkanoid established the opportunity to add lots of colour and some cheeky pixel art but there’s none of that here.  Instead we get dark backdrops with plain, vector-style animations and uninspiring brick layouts.  It’s all very plain but it does make for very clear action, which we did appreciate.  Especially after we disabled the screen shaking and particle effects that added unnecessary flourishes to the action without adding anything nice.

So yeah, it’s nothing special to look at and the gameplay doesn’t really add anything we haven’t seen in the last 35 years but it’s playable, enjoyable and addictive.  That’s all you really need from an Arkanoid clone and Breakout: Recharged leverages its classic gameplay well enough to make it worthwhile.

Breakout: Recharged
7 Overall
Pros
+ Addictive gameplay
+ Challenge mode offers a good couple of hours of fun
+ Offline co-op works well
+ Very easy to get into
Cons
- Visually bland
- Doesn't do anything new
Summary
Breakout: Recharged doesn't do anything new or particularly interesting with this take on the classic bat and ball genre but it is enjoyable enough and certainly addictive. We'd have liked to have seen a bit of eye-candy but we're happy enough with the gameplay to make this a game we can recommend.