I had to try one of these sooner or later. Neopica are bringing the niche hunting genre to current consoles with Hunting Simulator. Can a newcomer like me enjoy what is, on the face of it, a representation of a slow, methodical practice?

The tutorial spills the beans on the loop of Hunting Simulator. You tend to track first and then follow the trail to a likely habitat. It’s kept very basic and brief. I wouldn’t mind something a little more advance because, when it comes to the bread and butter hunt, I’m not doing so great. In terms of feedback, nearby tracks are highlighted in-game and on your map. Any animals that make noise close by are also noted in your display. In terms of providing you points of interest, it’s a good choice. 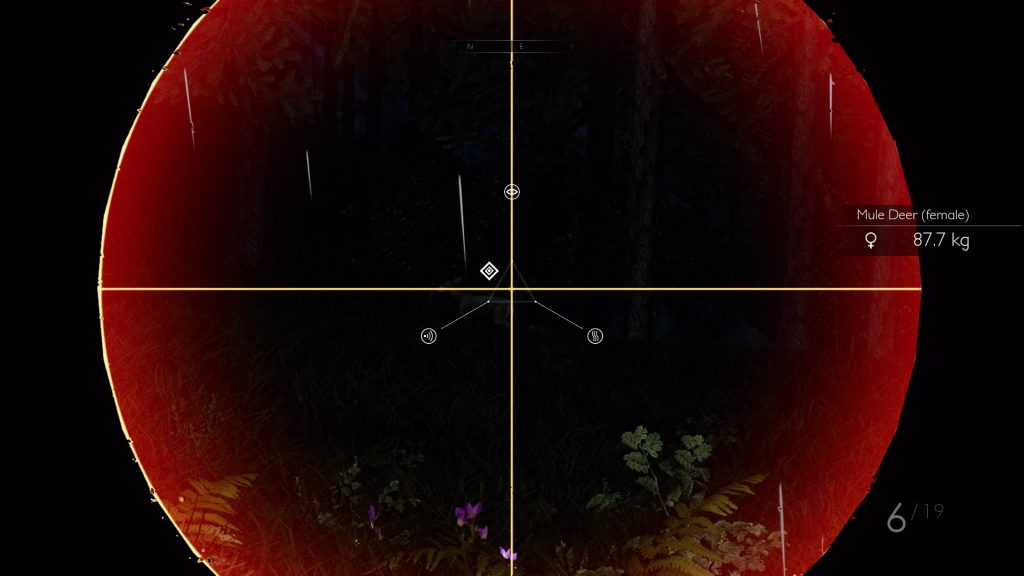 When out on the plains, hunting becomes a lot about patience and observation. You usually have one main prize to go after and a couple of bonus kills you can claim or ignore as you see fit. The additional targets give you something else to do in a landscape that is otherwise bare of landmarks and objectives.

Hunting Simulator is a nice looking game. The great outdoors are beautifully rendered with some lovely lighting effects peering through tall trees and grass. Things get a little less impressive when considering great distances. There’s also an annoying prevalence of flowerbuds and the like popping into existence. It’s a noticeable issue that has the unfortunate effect of double-taking your surroundings to ensure the dandelion that just landed in your vision isn’t the prey you’re trying to hunt. In a game where perception is key, this is an unwanted obstacle. The way time transitions from day to night conveys the passing of time well with darkness predictably limiting your vision and giving you one more hurdle to overcome. 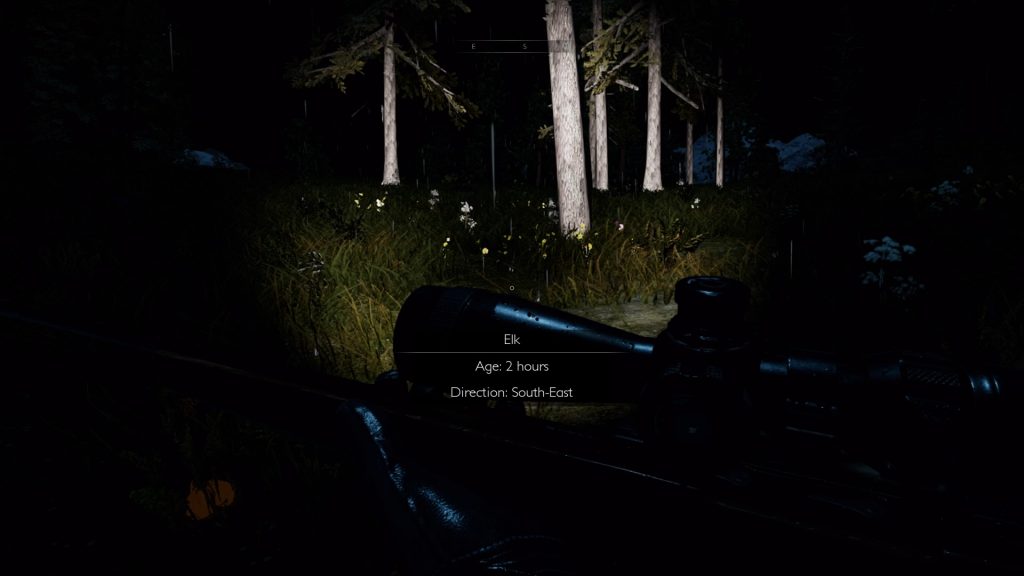 Sound design is decent with chirps and calls alerting you to any potential foes and the ambience of the great outdoors helps acclimatise your ears to your surroundings. It never sounds or looks too busy which, if nothing else, allows you to focus.

When actively sighting up prey, you’re given a brief outlay of their senses. If they hear, see or smell you, they’ll scarper. Unfortunately, moving up to get a better shot or some closer tracking will break that lock and you’ll have to have them in your sights once more to gather that information. In that time, they could already be running.

There is a threat indicator straight out of your standard shooter but, unless you have a keen eye, you’re not likely to know what’s checking you out. Different animals will have different ranges of vision, sound and smell which makes the hunt feel authentic. Wiki entries on each available one will clue you in on where they’re likely to graze, congregate or prowl. It’s useful information but, when it all meets together, it seems to fall apart.

I’ve had deer and sheep scatter from miles off. When it goes south, it sometimes feels terminal. The majority of the animals can outrun you and, if you’re unlucky, they won’t return to their usual spots. Predators might frighten your target and, when they do run, new tracks don’t seem to populate to indicate the direction they ran off to. Hunting Simulator‘s got no problem keeping the old ones out there, mind. I’ve no doubt a veteran might have more joy with this game than me. As a novice, I feel out of my depth and the systems at play don’t seem to play off each other like you might expect. 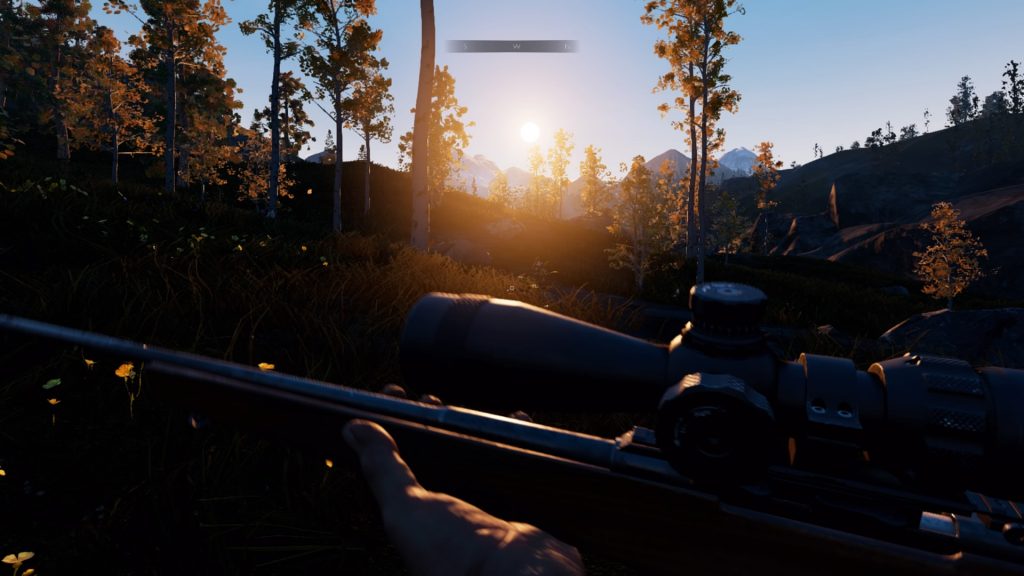 Shooting proves another frustration. With the animals being so skittish, a lot of my efforts have been from range. Being a simulation, your hand needs to be steadied and your shot needs to be accurate. You’re encouraged to go for body or head shots to ensure clean, quick kills and you’re judged on a points basis. The shot is hugely important and taking down a moving target adds some extra challenge. It’s a shame that missing these shots can result in an escaping prey which, as I’ve discussed, can be a real time consumer.

I feel like this game lacks a certain satisfaction. Again, I may not be the target audience for this but, after shooting a puma twice in the face, only to see her charge away, only the puma comes out of it looking like a bad-ass. Some hunters might enjoy a long, protracted chase that results in victory but, as a game, I find it to be of little impact. Couple that with the length of the campaign mode and you’re going to require absolute patience and precision.

There’s unlocks that come with successful missions but they dole out so slowly that you might just lose interest long before you’ve seen a new area. The advanced scopes and tools can certainly assist your hunts and make them more succinct excursions. The repetitive, methodical nature of the sport itself colours Hunting Simulator into something that, ultimately, feels impenetrable for fresh meat.

Hunting Simulator
5 Overall
Pros
+ Great looking game with some excellent lighting effects.
+ A substantial campaign.
+ Sound design is clever and points out nearby targets.
Cons
- There's repetition at every turn.
- Seems impenetrable for a newcomer like myself.
- The lack of feedback or advanced tutorials can prove frustrating.
Summary
Whilst I don't doubt this game's authenticity, I found Hunting Simulator to be a frustrating experience. A substantial campaign does make each prey feel unique with their own behaviours and the environments are well rendered. Sadly, getting to the shot requires so much time investment for a reward that doesn't feel too fulfilling. It's one for the enthusiasts. Novice hunters may have better luck elsewhere.