Valkyria Revolution is a follow up to Valkyria Chronicles, the warmly received turn based strategy game based around a pseudo World War 2. Despite carrying the same name however, Valkyria Revolution is no direct sequel and changes pretty much everything which made the first game great. This is a bold decision and one which isn’t necessarily successful, failing as it does on almost every aspect of being an enjoyable game.

When Valkyria Chronicles was released in 2008 it generated a lot of buzz and garnered strong reviews across the board. This was down to the great visuals, interesting story and deep turn based tactical combat. There were two more instalments on the PSP which again scored great. Given this history of turn based tactical combat I’m at a loss to understand why Valkyria Revolution opts for a generic third person action game with lashings of anime story bolted on top. 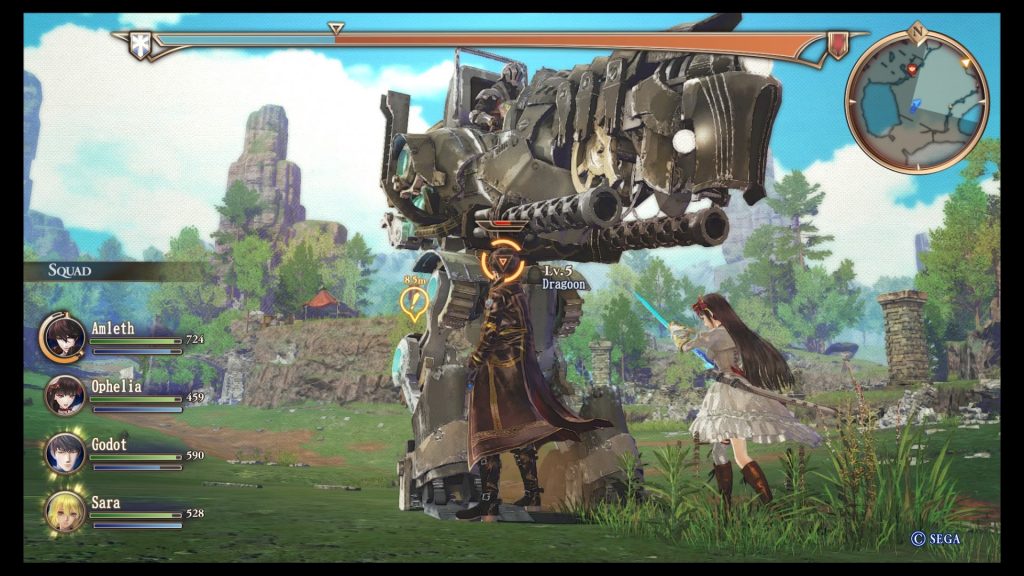 Your time with the game will be mostly split between two experiences.  Firstly there is the combat which plays out from a third person perspective and sees you running around a map killing very generic looking bad guys.  There is little here to enjoy as the controls are poor and the combat is dull and clunky.  The maps look generic and lack any level of reasonable detail, possibly a fact that this is also developed for the Vita. The camera is also twitchy and clumsy when the combat gets up close, frequently getting stuck around scenery or swinging wildly round to make you feel disorientated. It also feels very solid and lacks any kind of dynamism or fluidity to the movement.

The combat itself straddles an odd mix between full on action RPG and a turn based system.  Each character has a timer for any action they will do, like you’d get in a turn based game.  So although you have freedom of movement you can only attack when this timer is full. Pressing the attack button once will then give a three or four it combo you get locked into until it has finished, you’ve then got to wait a couple of seconds before you can press the X button once more to strike with exactly the same three hit combo.  There is also some magic attacks and at least here you have to line up your shot, ensuring the field of affect encompasses some bad guys.  This gives some element of tactical depth but overall there is none of the fluidity or variety you’d find in other action games.

Outside of the combat there is a hub to explore where upgrades can be bought and sold.  This hub is tiny and effectively a single street with nothing of any real depth or value here.  There is nothing here which couldn’t have been achieved on a menu system, it very much feels totally superfluous.  What this hub does allow though is the ability to select the next mission, either from the story based missions or the optional freeplay missions. Given how poor the combat is here the freeplay missions almost feel like punishment, particularly when they lack any of the, severely limited, variety of the main story missions.  These free play missions are very samey and dull, serving to highlight the dearth of creative vision on display here. 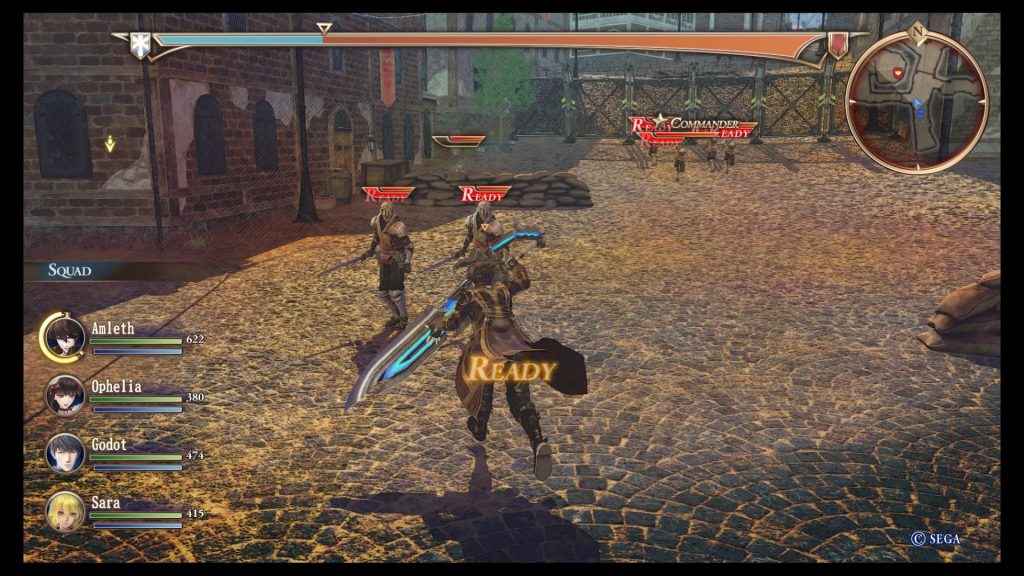 The other main aspect to Valkyria Revolution is the story, of which there is a lot. In a nice conceit the game plays out as a lesson taught to a student about what really happened in the war.  The teacher and student sit in a wooded grove and engage in long discussions which then transition, via a loading screen, to actually showing you the war and the story continues. The narrative is served to you via lots and lots of talking head scenes. Sometimes the characters will be sat round a table, sometimes stood round a table, sometimes they will be on a battle field, sometimes they will be in the street.  Each transition is also accompanied with a loading screen, and there can be multiple loads in each story segment.  This gives the end result of having to wade through story sections that can last upwards of 10 minutes, in fact some segments are so long they offer the ability to save during them.  For a game styled as an action RPG there is a significant portion where you’ll be looking at stilted dialogue and endless loading screens.

Not only is there a lot of story but it is also dull and confusing and I’m hard pressed to give any kind of decent summary of the plot.  What doesn’t help is that without fail the voice acting is of a very poor standard, lacking any kind of emotion or engagement.  Lines are delivered stiltedly and without nuance and some of the more emotional scenes are laughable in their quality.  The characters delivering the lines are also poorly animated often standing stock still and delivering lines like a child would. 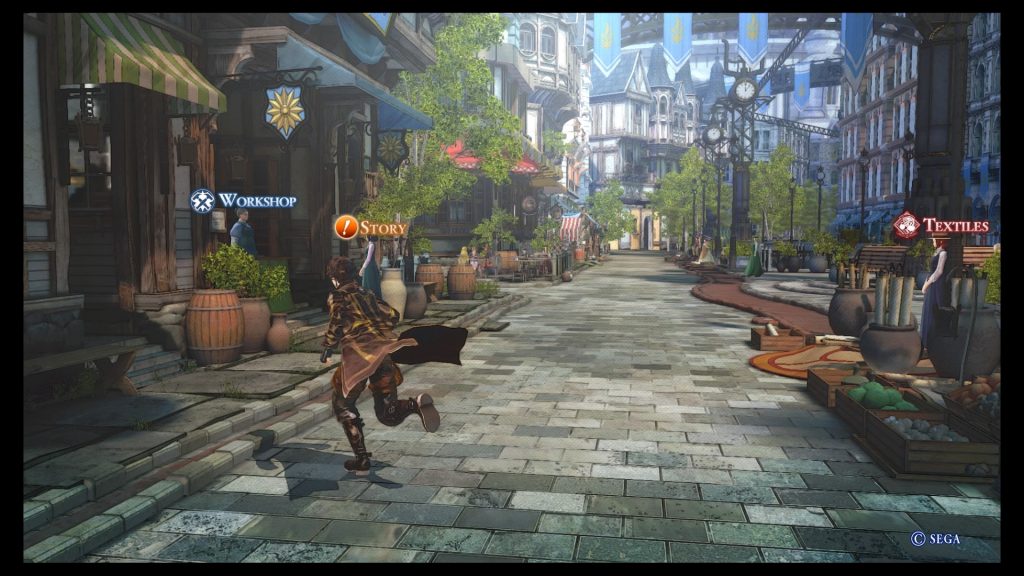 Graphically things are sub par and they’ve disappointingly dialled back the interesting cell shaded  feature of the original game.  The textures feel very simple, the geometry is very blocky, the levels look very samey, the character animation is barely serviceable and the special effects of the magic are lamentably poor.  These could all be hang overs from the fact the game is available on the Vita, but as this is on the PlayStation 4 I need to consider this with reference to other games on the system. There is nothing within this game which stands out visually.

There is almost nothing to recommend with Valkyria Revolution as it fails to hit the mark in pretty much every aspect. It is a long game though, particularly if you get invested in the samey freeplay missions and I suppose in this regard it could keep you going for some time.  This is damning with faint praise though and at the end of the day there are significantly better action RPG’s out there.

Valkyria Revolution
3 Overall
Pros
+ A decent amount of content here
+ Nice narrative twist of having the game recounted as a story between student and teacher
Cons
- Far too much dull story, with far too many loading screens
- Weak graphics are possibly a hang over from the Vita
- Repetitive combat, and mission settings
- Poor voice acting, lacking any real nuance
Summary
There is almost nothing to recommend with Valkyria Revolution as it fails to hit the mark in every aspect having, for some reason, changed pretty much everything which made the first game great. What you're left with is a very forgettable action RPG which frustrates with an overly long and dull story and simplistic and clumsy combat.