Horatio Goes Snowboarding is an arcade-style mix of two genres, the obvious snowboarding part and another section that is a basic traffic-avoiding game in the style of Frogger.  It comes to us by way of Infinite State Games, the studio behind the fantastic Rogue Aces and the maddeningly addictive Don’t Die, Mr Robot.

Some of you might be thinking ‘hang on… snowboarding and Frogger?’ and while that might seem like an odd combination, older readers will know exactly what inspired Horatio Goes Snowboarding as this game is very much a take on the 1982 ZX Spectrum game Horace Goes Skiing.  Much like that game you play as a weirdly proportioned blue protagonist who has to walk from the starting point (a hospital), across the road, pick up his equipment and hit the slopes. 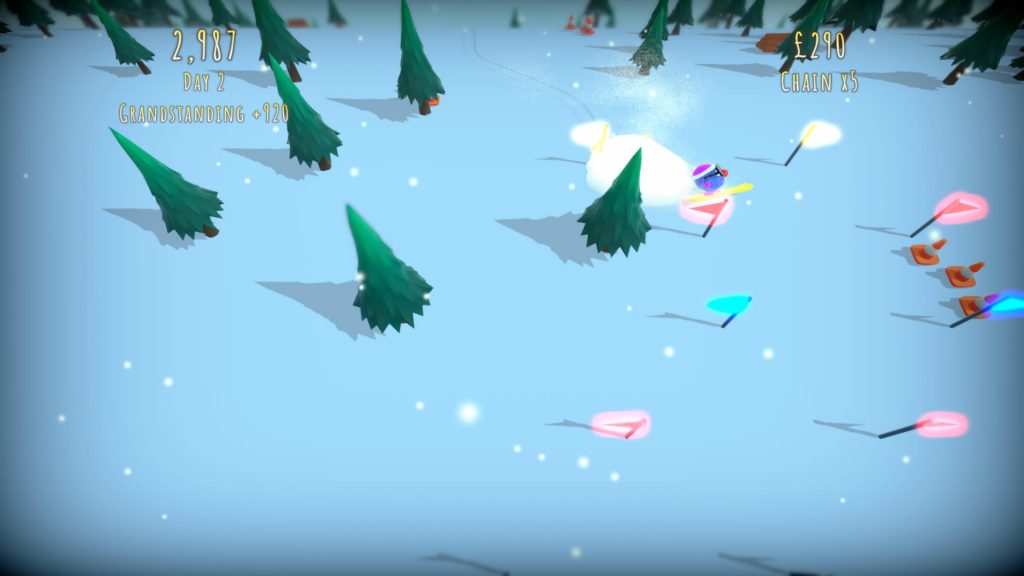 With no buttons to worry about, you control all of the action with the left stick or d-pad.  The first section (the Frogger-esque part) is basically fifteen seconds or so and you just walk up through the screen, avoiding cars until you reach the helicopter.

That is followed up with the main snowboarding part which is a minute’s worth of downward scrolling, slidey action where Horatio snowboards down the slope.  Now you can just survive by taking the safest path but you’ll get no points for that.  Instead what you need to do primarily is get through pairs of poles to keep your combo going which is a pretty good way to increase the chances of smashing into a tree. 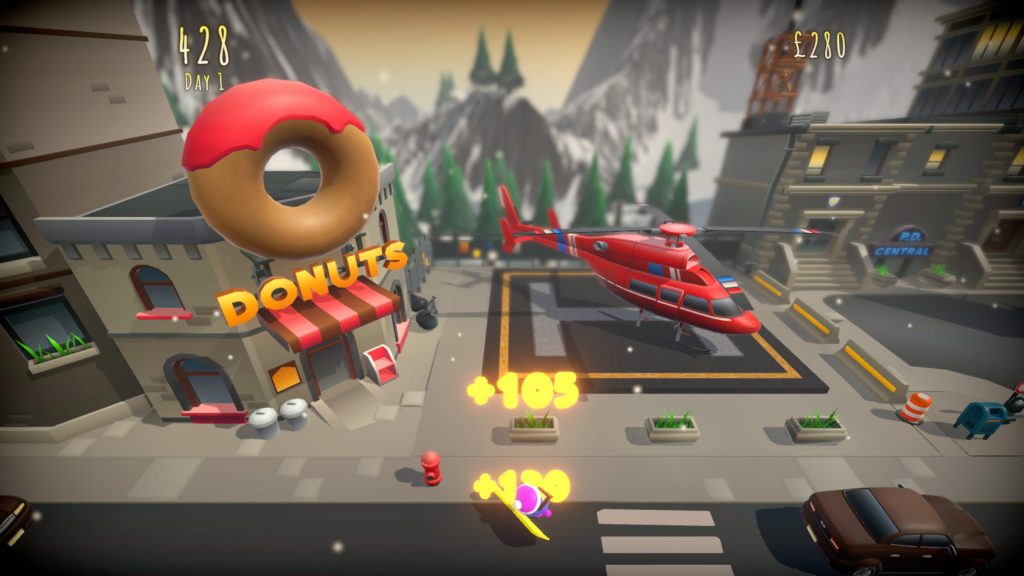 The other mechanic which isn’t explained at all is a nice risk vs. reward where you get more points for narrowly avoiding obstacles.  At first you’ll just be looking to survive but the game gets a lot more interesting when you start taking chances.  The only issue there is that the leaderboards are buried in the ‘more’ section of the main menu when really they should have a lot more prominence.  It’s nice to see online leaderboards though (even if ISG have committed the cardinal sin of topping their own board).

Much like its Speccy inspiration, Horatio Goes Snowboarding is a little bit limited in that you’ll have really seen everything in just a few minutes.  It’s a very old-school experience and really just based around doing a couple of things well.  And to be fair, the traffic section is actually just a bit too easy to really offer any meaningful gameplay, especially as it doesn’t include the risk mechanics of the snowboarding section.  And there’s a little bit of a gap between the action while the helicopter takes off from the end of the traffic section and lands on the slopes.  It’s only eleven seconds but eleven that’s 1/7th of the gameplay loop and does start to grate a little. 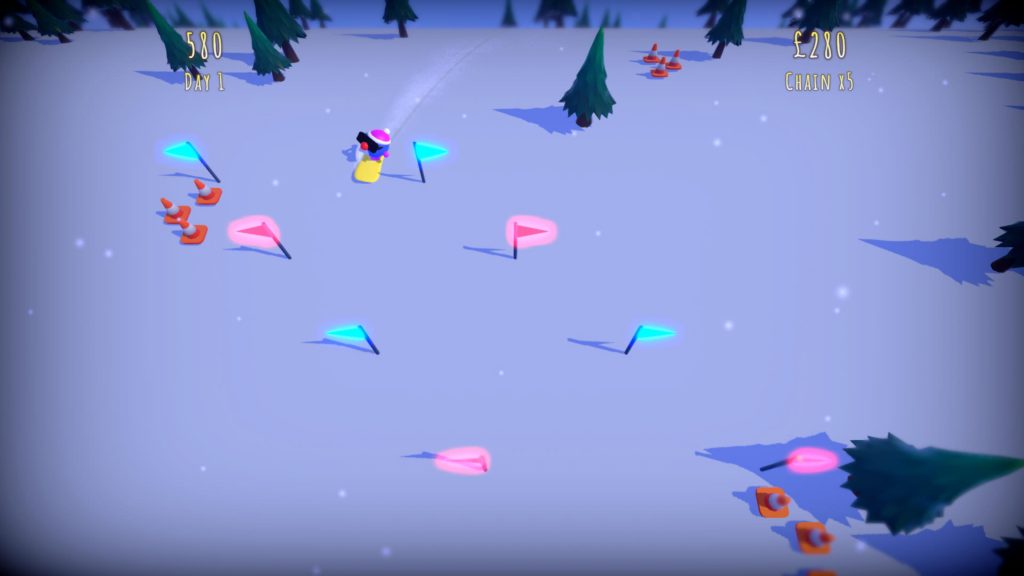 But those are fairly minor complaints for what is otherwise a quirky retro-inspired game.  The smoothness of the gameplay and the constant sense that you’re seconds away from disaster do make Horatio Goes Snowboarding a fun, compelling experience.

The presentation is cheerful, bright and breezy.  While the graphics are best described as cartoony and fairly basic (although not without charm), the sound is decent thanks to the use of some nice drum and bass.  Overall, the game feels very much like the 2021 version of the game we grew up with in the ’80s and it’s worth noting that Horace Goes Skiing was similarly basic in terms of gameplay and visuals. 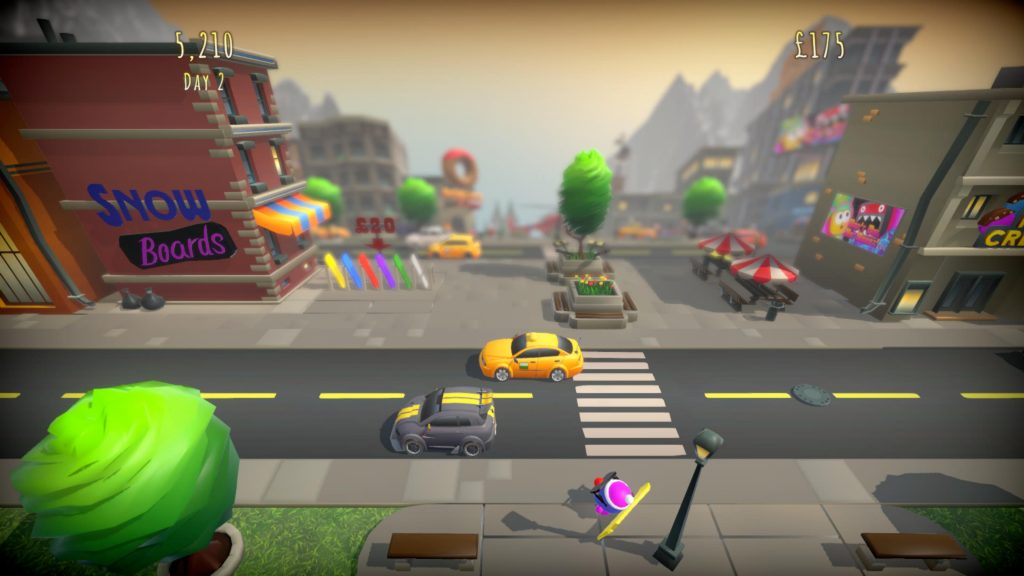 Now we don’t always mention trophies but it’s worth doing so here as they probably give you more incentive to play and do well than the game does.  Without them, say on the Switch, you’ve got a very short game loop here with nothing but a leaderboard to keep you interested, but with them you’ve got a few more reasons to keep going back and to do well.  It’s a pretty good set of trophies too with nothing too obnoxious but it still offers a good degree of challenge.

While we do appreciate the nostalgia (I mean, I personally still remember that QZIP was the keyboard layout for Horace Goes Skiing), this might have just been better as a snowboarding-only game with that part being fleshed out a bit with some tricks and more variation in terms of obstacles and threats.  But as it stands Horatio Goes Snowboarding is a fun bit of retro-themed arcade-style gaming but not a game that is up there with Infinite State Games’ best.