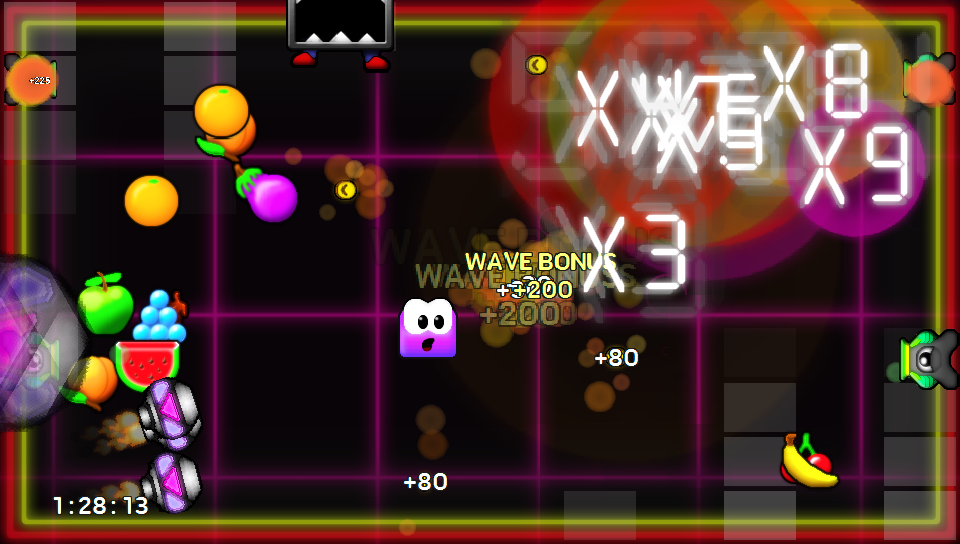 Don’t Die, Mr Robot! by Infinite State Games is fast-paced arcade title for the PlayStation Vita that adds to the machine’s growing pile of indie gems.  It’s a top-down dodge ’em up that sees you controlling the titular Mr Robot as he avoids waves of enemies that crowd the little Vita screen.  Although Mr Robot is unarmed – both analog sticks can be used to control his movement – he is able to protect himself by picking up fruit which will explode.  Explosions will take out enemies and also detonate other nearby fruits, which will increase your multiplier.

Gameplay-wise it’s a pretty direct copy of Every Extend Extra, using near-identical gameplay mechanics, but Don’t Die, Mr Robot! gets away with it for a few reasons.  Where Every Extend Extra for the most part seems to play itself and a game can last as long as the gamer remains conscious, Don’t Die, Mr Robot! has perfectly-pitched levels of difficulty.  In the game’s default Arcade mode, you are really just battling your own high score and the game’s smart risk vs. reward mechanic (do you go for fruits right away to protect yourself or save them up for a chunky points combo?) means that failure is always down to the player. 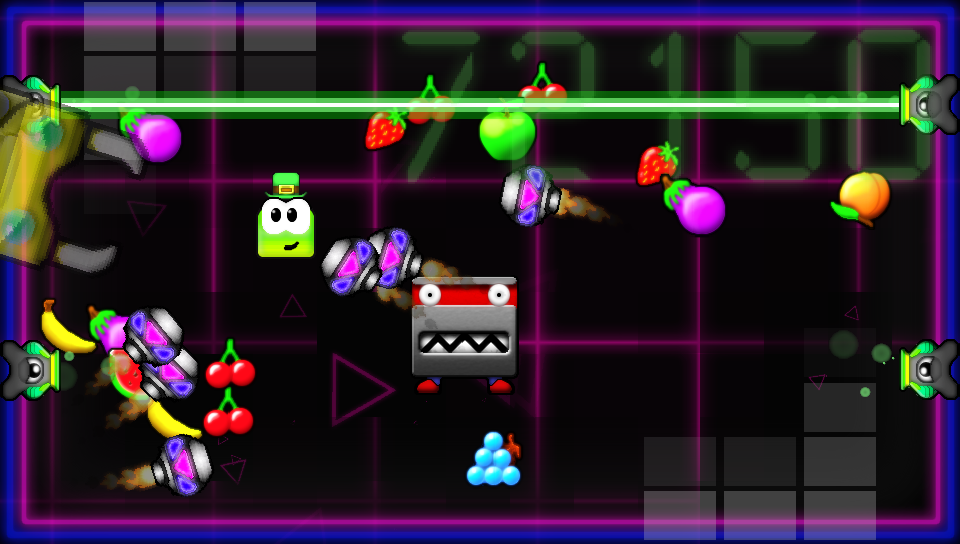 A handy Time Attack mode allows players to pick up and play for two and a half minutes if they just fancy a quick go while the Chill Out mode slows everything down for a calmer but more tactical game.  However you play it, there’s always a challenge there but it’s a fair one.  Don’t Die, Mr Robot!  isn’t trying to prove a point by punishing you for not having well-honed ’80s coin-op skills but it isn’t going to give away the big scores without something of a fight. 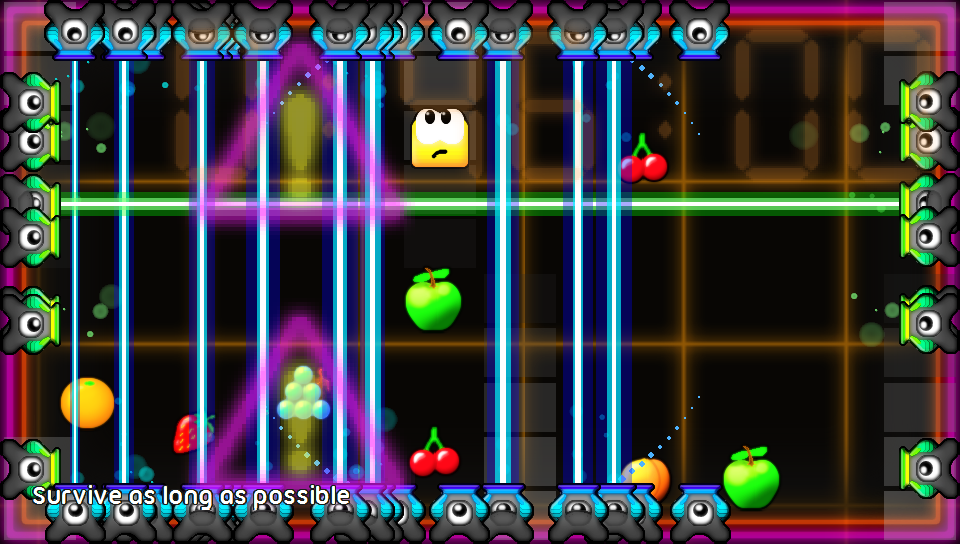 Longevity comes from the game’s Remix mode.  Here we have fifty short stages that each have different completion criteria and changes to the core gameplay.  So you can find yourself in levels where you can only move on one plane or where certain fruits will kill you.  These are nicely varied and a medal system keeps you coming back until you have those elusive gold and platinum medals.

As you continue to play and detonate your enemies, you pick up coins which allow you to purchase outfits, new playable characters and power-ups.  Now anything score-based shouldn’t really have power-ups, it’s usually something I hate in games like, for example, Bejeweled Blitz where your runs with power-ups are the only ones that matter but here they’ve kept the power-ups cheap and the choice sensibly limited so it isn’t a big deal.  There are also leaderboards for people not using power-ups, so they’ve mitigated any real criticisms there. 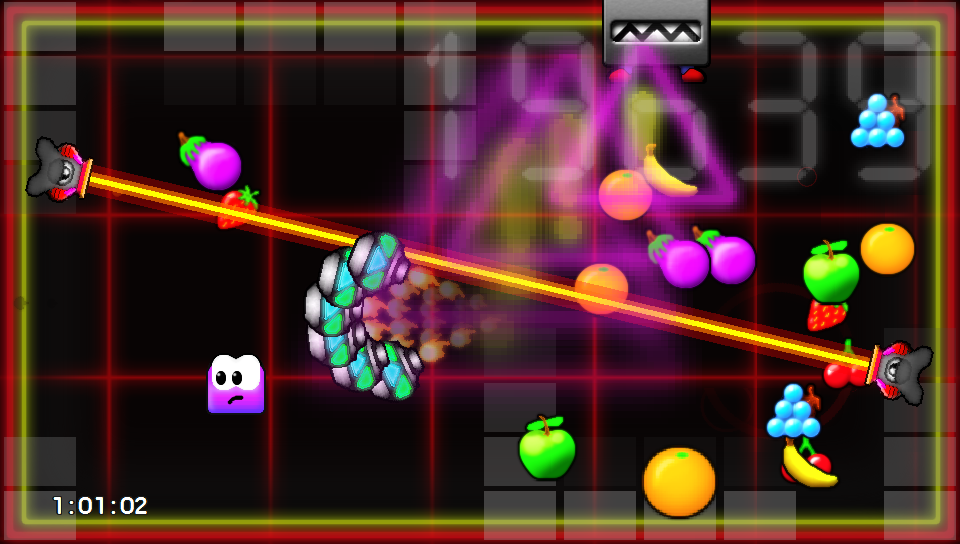 Presentation is pretty decent with some nice neo-retro visuals.  The backdrops are bit more exciting than the sprites (which can look a little bit like a Flash game) but it’s a clean look that importantly doesn’t get in the way.  Objectives, and your score or current timer, are displayed cleverly as to not obscure the action.   The soundtrack is a mix of techno beats and chirpy themes that doesn’t offend either.

Don’t Die, Mr Robot! isn’t the most original game on the Vita but it is polished, playable and OBSCENELY ADDICTIVE.  The trophies are well-judged enough that you can use them to guide your gaming without them feeling like a grind and they are fun to earn, even for people like me that haven’t bought into the trophies thing at all.  Everything here works so well that Don’t Die, Mr Robot! easily makes it into PlayStation Country’s Vita top ten.

Don't Die, Mr Robot
8 Overall
Pros
+ Accessible gameplay
+ Highly addictive
+ Well-presented
Cons
- Is an arcade-style title so lacks a little variation
- Controls are a little twitchy (but not unfair)
Summary
An excellent avoid 'em up that is perfectly suited to the Vita.