Rogue Aces is a cheery little arcade shooter that comes to us from Infinite State Games who previously brought us the addictive as crack-flavoured Kit Kats dodge ’em up Don’t Die, Mr Robot and is, as the name suggests, an aeroplane-based affair.

You play as a pilot in a time of war who flies the unfriendly skies around your aircraft carrier.  There’s no real plot though which is great as you’ll be glad to dive into the action after the game’s short tutorial which gives you the basic controls that you need. This is a side-viewed 2D affair where you can fly in all directions using the left stick and the right stick controls your speed rather than this being a twin-stick shooter. 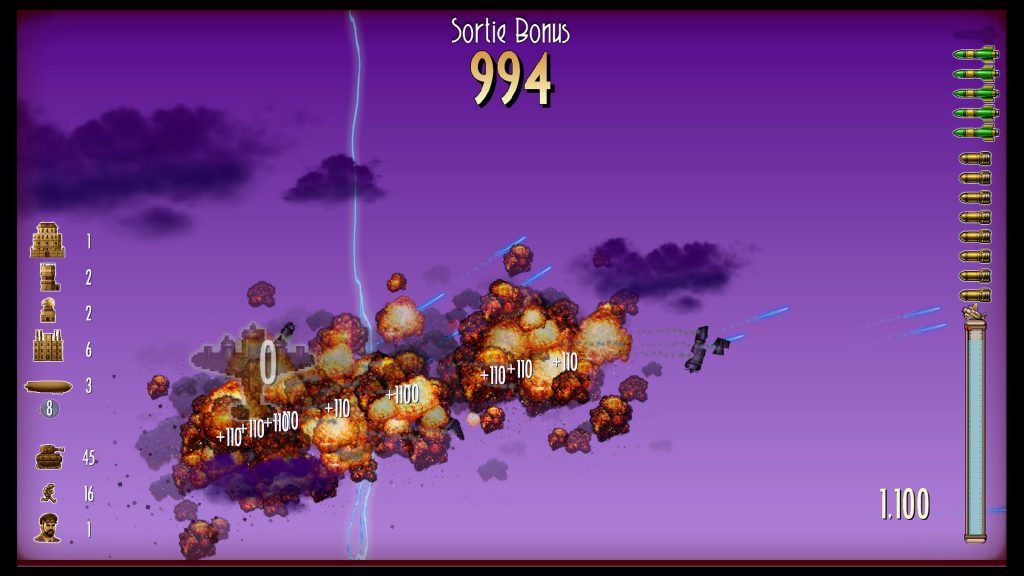 The game has a few different modes but you’ll start off with the basic campaign. Here you will be given missions to complete, these generally involve taking out a specific target or two, before returning to base. With a bit of practise you’ll soon make good progress in this mode, earning experience so that you can level up and then can then embark on the more interesting, and intense, Frontline mode.

In this mode you’ll be starting off on your base island where you get to pick one of three islands to conquer, each with a star rating indicating the difficulty. Each island leads to three more choices and ultimately you’ll need to make it across the screen where the enemy HQ is located.  Each one of these stages has a set number of targets to destroy and you can do this with your guns (

), the latter two having limited ammo stocks. You can reload, and refuel, by landing back at base though.  Oddly, in this mode you don’t get lives but time.  You’ve got a couple of days to get to the enemy HQ but each mission takes two hours (it’s more like five to ten minutes in real time) but failed attempts use up time too, so ultimately you do only have a fixed number of attempts to get through all the islands.

These levels are patrolled by enemy planes as well as tanks, infantry and warships and populated by lots of buildings to destroy. Dogfights are fun, even if they do generally involve circling your enemy like all plane-based games, but it is even more enjoyable when you take out ground-based enemies by strafing low to the ground, destroying everything.  That said, there are some really nice touches such as you being able to eject from your plane and hijack enemy planes on your way down. 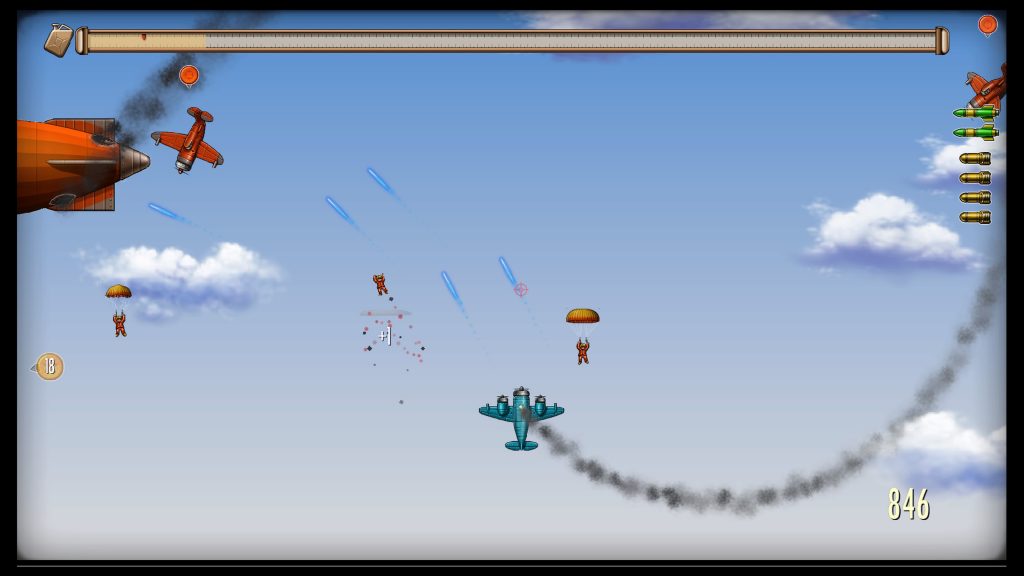 You can liberate bases (by pretty much destroying them) so that you can land there without having to get back to your aircraft carrier. Landing can either be automated (by pressing X but at a cost of your points which ultimately will take away from any experience you earn at the end of the level) or performed manually. Manual landings aren’t difficult but can go awry. You’ll want that EXP though because levelling up grants you power up boosts at the start of each campaign.

The action itself is pretty similar to Luftrausers, with you chasing, and being chased by, the enemy across a scrolling sky but where that game threw a brick wall at you very quickly (when that zeppelin turned up that you never managed to kill), this game manages progress a lot better.  The game also evokes memories of the old arcade game Time Pilot (but way better).

Also, the visual style – which is bright, bold and colourful – is a lot more appealing than Luftrausers‘ monochrome graphics. Sure, it’s more functional than beautiful and the game’s art won’t be winning any awards but overall it’s still an attractive game and it does well to let you follow the frantic action that is taking place before you. 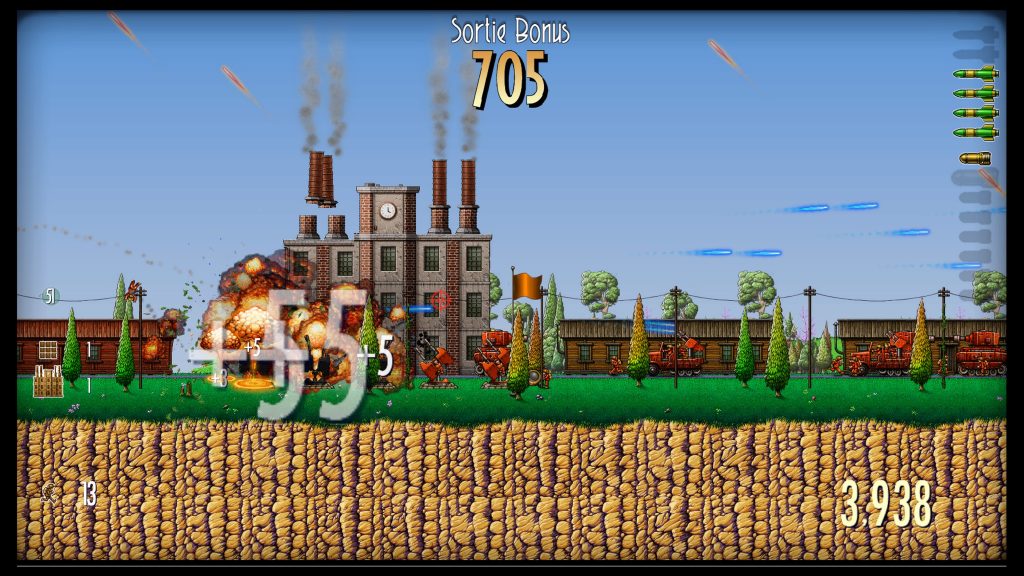 In-game sound is pretty much restricted to the roar of engines and guns but it does a job. Mission briefings are given via text conversations (with mumbly nonsense speech soundbites that don’t really follow the text) and its all backed up with some rocking guitar music.

We review a lot of games here and sometimes you get bogged down in endless indie games, lengthy adventure titles and sprawling open world efforts so it is very refreshing to get our hands on a nice throwback shooter like this and Rogue Aces has been a welcome surprise.  It’s fun, chaotic and satisfying to play and there are plenty of modes to unlock as you make progress which adds some decent depth to what is essentially a fairly repetitive shooter.  It doesn’t feel like that though when you’re blasting your way through it.

The game is also a cross-buy title with cross-saving so you can keep your progress going on the go with the Vita where it plays just as well as the PS4 version and is just perfectly suited to the format.

Infinite State Games are two for two with us right now and we’re looking forward to seeing what they do next but take your time guys, we’re happy playing Rogue Aces and no doubt will be for quite a while.

Rogue Aces
8 Overall
Pros
+ Action-packed
+ Doesn't get bogged down in upgrade mechanics
+ Tremendously good fun
+ Smooth difficulty curve
+ Clean visual style
+ Unlockable modes add longevity
+ Cross-buy and cross-save between PS4 and Vita
Cons
- Simple gameplay might get repetitive
- Some modes aren't as good as others
Summary
Rogue Aces takes an old formula and spins it into one of the most exciting and fun shoot 'em ups on PSN right now.