Cotton Reboot! is, as the name suggests, a reboot of the popular cult shoot ’em up, Cotton: Fantastic Night Dreams.  The original was a horizontally-scrolling shoot ’em up, developed by Japanese developers Success.  This reboot however comes by way of a dev team called Beep and they’ve done quite a lot with the source material.

Initially a coin-op, Cotton found an audience with console gamers in the early ’90s but it was the Sharp X68000 version that was seen as being the best version and that is the version that is used as the base for this reboot.  Before we get into that though, what you really need to know is what Cotton is all about.  If you’re wondering what the hell an X68000 is, join the club.  It was a Japan-only console, back when Sharp were more famous for their shirt sponsorship of football teams. 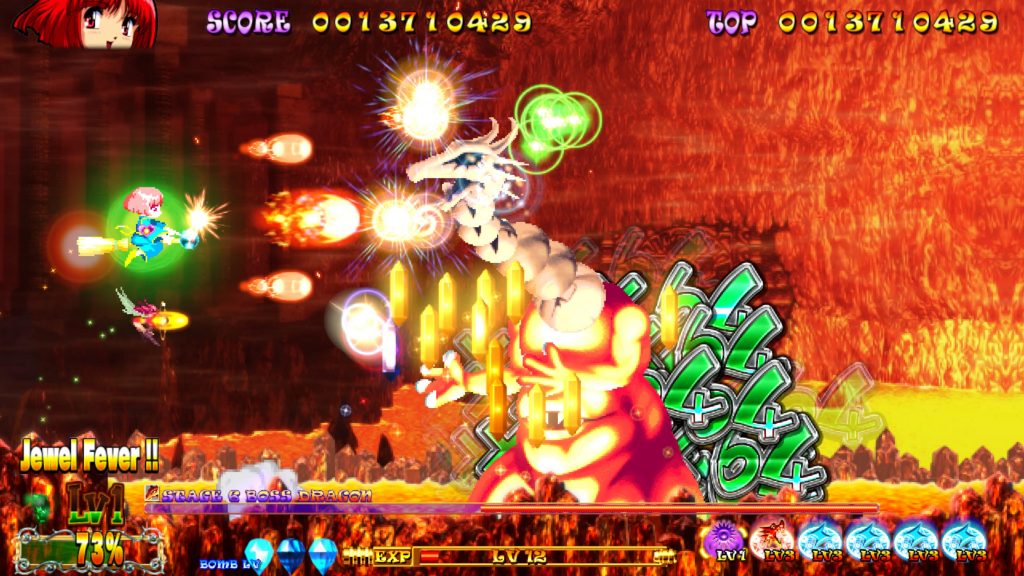 You play as the titular, Cotton.  A young witch on a quest to collect candy and vanquish evil.  The gameplay initially seems relatively simple, you fly ever onwards to the right of the screen through the game’s seven levels and you shoot anything that gets in your way from creatures, monsters, demons and large bosses.  It’s all very familiar, especially if you’ve ever played Trouble Witches or Deathsmiles.  However, the game has various complexities that you also need to consider.

From, Silk, your drone-esque companion to a scoring system that involves gems that cycle through colours, there is plenty to consider here.  You even get various magic-based attacks each with their own attack level that can be upgraded, a ‘fever mode’ attack which fills the screen with score multiplier graphics and you’ve even got an overall XP meter.  At first it’s all a bit of a mess.  The in-game manual explains it well enough though but initially it’s not all that clear until you do that.  The coloured crystal system affects weapon/magic power, can deflect your primary attack and allows you to milk maximum scores out of the levels.  This is probably the key aspect to the game but it’s not particularly intuitive. 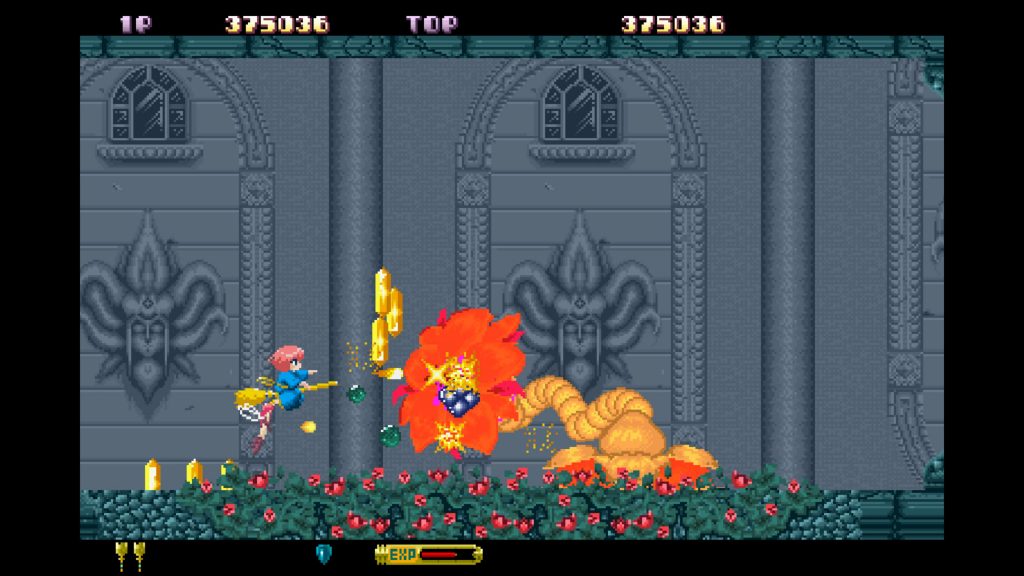 The game offers three main modes.  The first is the Arrange Mode which is a modern take on the original game.  This ups to visuals to manic levels, adding lots of detail, absolutely tons of colour and a heap of visual excitement.  It overhauls the HUD, making it nicer although not much clearer in terms of the information it offers but the main benefit of this mode is how it takes the level layouts of the original game but refines it all, making it just a bit smoother and more enjoyable to play.

You also get the X68000 version which definitely looks dated in comparison but is still a fine looking example of an early ’90s shooter.  It’s odd that they didn’t include the arcade original but the X68000 version is widely regarded to be better and so that decision is understandable.  This version is visually clearer, with fewer explosively colourful elements and the sprites are a bit smaller which makes skilful play a little easier. 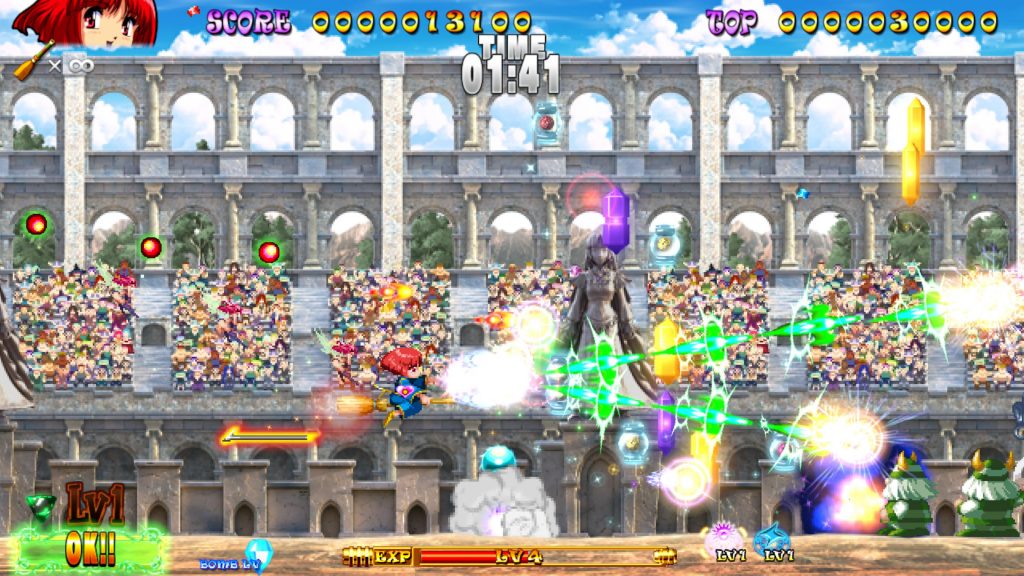 Last up is the Time Attack mode which gives you a choice of two and five minute time limits.  This is based on the visuals and engine of the Arrange Mode version but is set in one dedicated arena level (see picture above) and is just two (or five) minutes of shoot ’em up chaos.  This gets pretty tough and manic but you only need to worry about scoring here as opposed to survival.

So, overall there’s some good shooting action to be had here and with the game’s complicated scoring, there’s plenty of reason to keep replaying the game to improve on your previous efforts.  That said, the game does get pretty tough later on and so you’ll be more interested in survival for quite a while.  That said, this is regarded as one of the easier shoot ’em ups, even if we’re not sure we 100% agree with that.  Maybe we just need to get good but the game’s infinite continues means that you’ll be able to see the end of the game, no matter what your skill level. 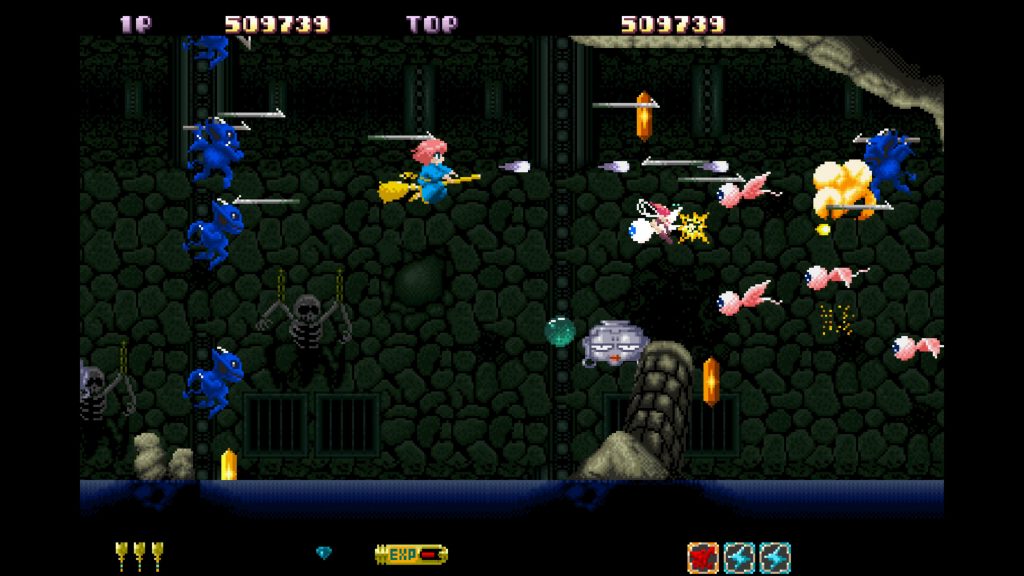 It’s not all good news though.  While the Arrange Mode option is great and looks fantastic, the visuals can get a bit too much at times, leading to some cheap deaths for the players.  Also, sometimes enemies can appear behind you during some sections which isn’t something you’re necessarily set up to deal with.  So that can feel a bit cheap.  And then we’ve got the bosses who have some pretty devastating attacks that aren’t particularly telegraphed and will rob you of lives and continues for a long time before you memorise their attacks.  We tend to prefer our shoot ’em ups to be more reactive than about memorisation, so this will always bother us a little.

But with Cotton Reboot!‘s classic gameplay and impressively modified presentation, this package will certainly appeal to hardcore shoot ’em up fans and, of course, fans of the original Cotton and/or the series as a whole.  Casual players will likely find some enjoyment here too, and some eye-candy to marvel at.  So overall, we have to declare the game something of a success even if, in its worst moments, it can be quite frustrating.

Cotton Reboot!
8 Overall
Pros
+ Two versions of a very playable game
+ The modern version looks really nice
+ Plenty of depth in terms of scoring
Cons
- Some unfair moments
- Would have been nice to see other games in the series added
Summary
This reboot takes a classic shoot 'em up and reinvents it quite brilliantly. By upping the presentation to the max, it provides an exciting, modern version of the game without messing with the original's gameplay. For fans of the original, this is simply essential.