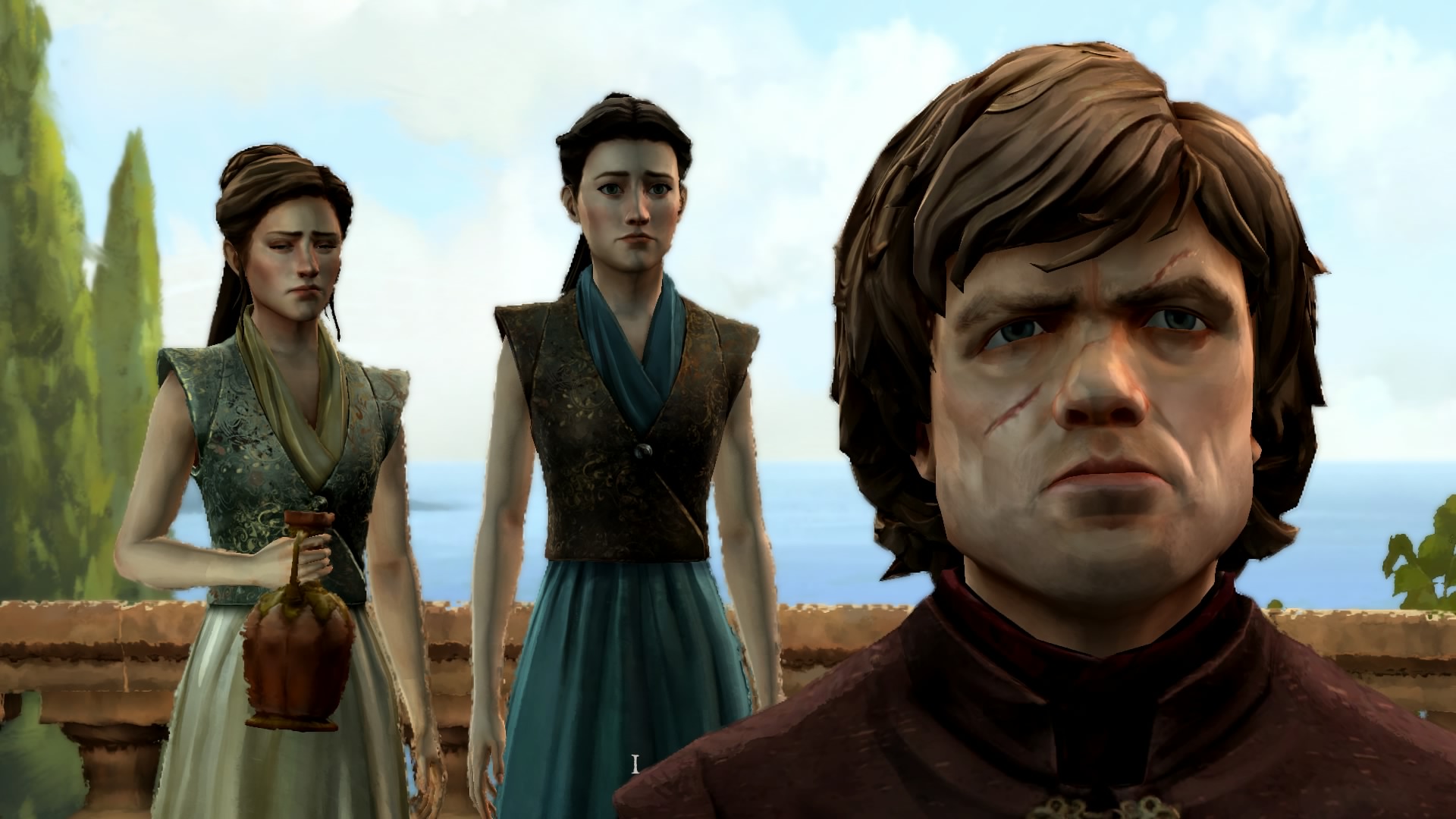 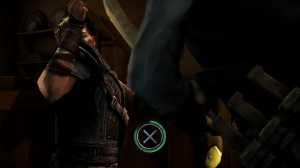 If you’re hankering after the latest Season of Game of Thrones then the episodic game of the same name may just be for you. Episode Two has now landed, and after the cliff hanger of Episode One, I couldn’t wait to get back. Telltale have used the world created by George R. R. Martin tell their own story, and through your journey through it you’ll encounter places and characters from the TV show.

This game has obviously been made with fans of the TV in mind, and the use of the title music and opening cinematic really raises a smile. You’ll visit areas such as King’s Landing and the Wall and will meet a range of characters from the TV show. Telltale must have spent a long time getting all these details correct as it all looks and feels authentic including the areas which have been made specifically for this game.

As with the first episode the opening section is pretty full on.  Action packed and a great explosive way to start Episode Two. Maybe not as impressive as the opener to Episode One, it still manages to start with a bang. Before long you’ll be finding out what happened to the Forresters and reuniting with some old unexpected faces from the first episode.

This episode takes you to the Wall and brings you into contact with the ladies’ favourite Kit Harrington. The scenes at the Wall are great and the changes from the warm reds of King’s Landing to the cold whites of the Wall really help to emphasise how far you are from home. The wall also feature more action based gameplay, and does feel different to the rest you’ve played.

As with all the Telltale Games point and clickers, you guide the gameplay by choosing what to say from a conversation wheel. If it ain’t broke don’t fix it, and once again the limited time in which you’ve to make your choices really focuses your decision making. Whilst there is nothing here which matches the intensity of the Leana Headey conversation in Episode One, there is a good mix of situations on offer and once again it’s not clear which answer is necessarily the best. A scene in the Forrester hall is very nuanced, and special mention has to be given to the powerfully emotional way the episode ends. Overall Episode Two has a more balanced set of scenes and feels more complete for it. 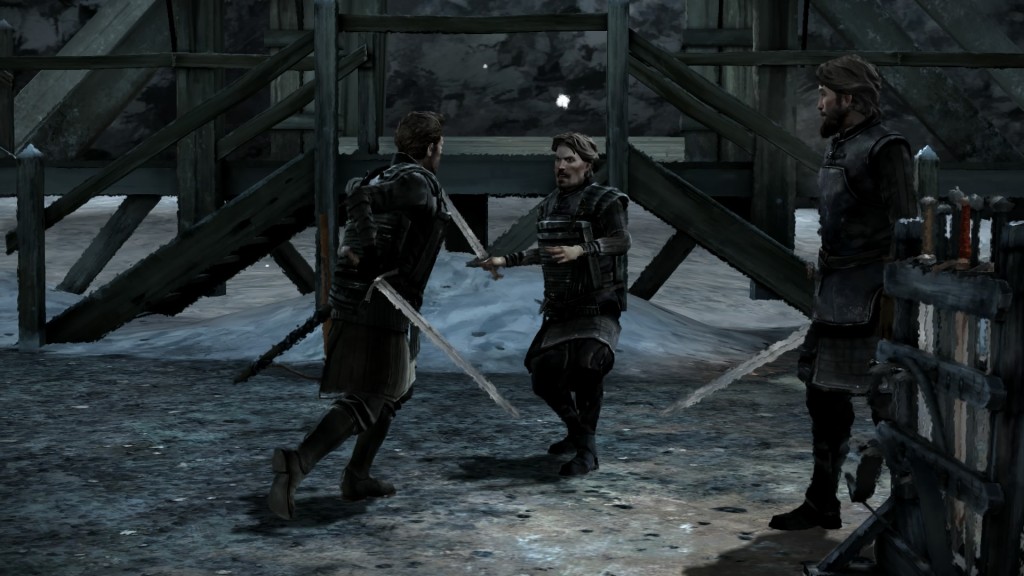 Visually this sticks with the odd paintbrush art style with the brush strokes evident in the textures. It works well in some regard and the movement and blending of the colours can be quiet beguiling to watch. However it falls down when it comes to rendering people and in particular the faces of the stars of the TV show. Natalie Dormer still looks like she has some horrible rashy skin complaint but Kit Harrington looks fine, and it’s clear to me the art style works best for men. Unlike the first episode, I also experienced a couple of graphical glitches, nothing to ruin the game but still a concern.

Once again it’s time to consider the voice acting as it is of paramount importance in a game where the bulk of the action is story driven. Natalie Dormer continues to step up to the plate and good old Peter Dinklage has also improved somewhat. Newcomer Kit Harrington sounds all gruff and north and delivers his lines well enough, and there is enough use of the words ‘bastard’ and ‘fuck’ to keep any fan happy. Once again though the quality of the acting provided by the non TV characters is arguably better. However overall comparing to episode 1 the acting is much better this time round. 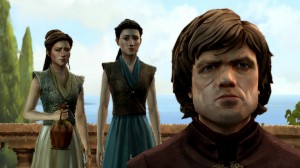 It has been reported that George R. R. Martin was disappointed with the quality of the previous Game of Thrones game (the hack and slasher by Atlus), and frankly it’s not hard to see why. Telltale secured the rights after a lengthy process on the basis of their previous story driven games, and I think old George would be happy with the results on offer here. As we’ve now played the first two parts of a six part story you are beginning to see where the plot is going to and already there have been surprises and fantastic cliff-hangers. Telltale really are able to tell a decent yarn.

Overall this is one for fans of the show, and if you’ve not bought the first episode you should certainly start there. The story is more measured than Episode One and whilst nothing scales the intensity found before there are arguably more emotionally powerful scenes to be found here. I for one can’t wait for the next instalment as there are enough threads left dangling to really get me thinking. For a low price this game offers you the chance to get a bit more involved in the Game of Thrones experience.

Game of Thrones: Episode Two
7 Overall
Pros
+ Use of original voice talent + Compelling story + Overall improvement on voice acting from Episode Two + Locations and music taken directly from the TV show + Some of the scenes carry a great emotional weight to them as the choices on offer provide real quandaries
Cons
– Art style almost works, but just misses looking great - I experienced some graphical glitches here - At the end of the day this is fundamentally a story, so interaction and “gameplay” is limited - Subtract a couple of points if you aren’t a fan of the TV show - Doesn’t have the same cliffhanger ending as Episode One
Summary
One for fans of the show, and if you’ve not bought the first episode you should certainly start there. The story is more measured than Episode One and whilst nothing scales the intensity found before there are arguably more emotionally powerful scenes to be found here.