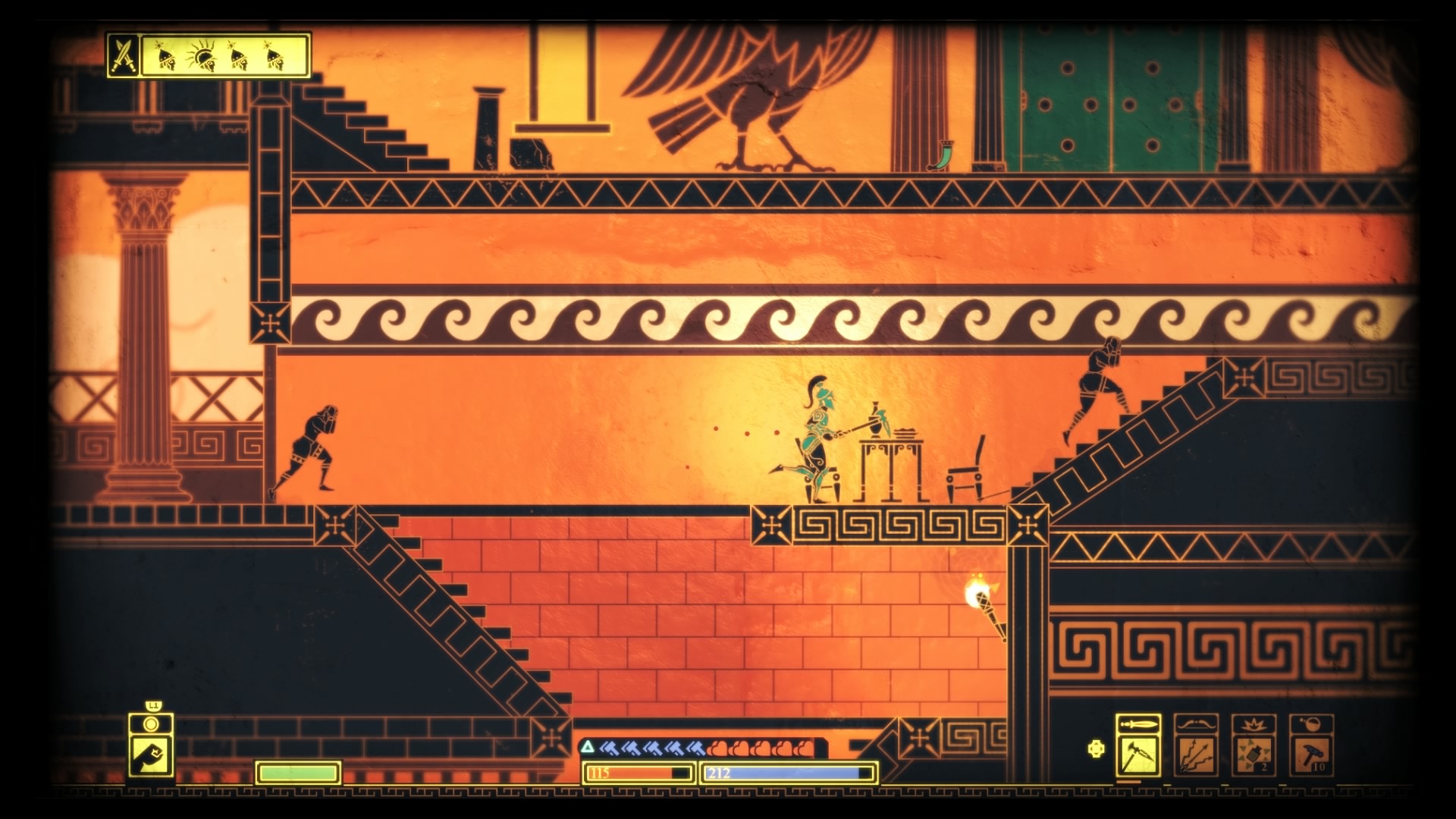 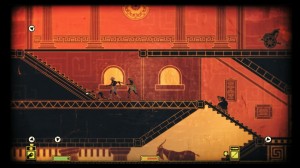 You may not have heard of Apotheon, it’s one of those games that sneaks out with a new month of PS+ and the name doesn’t exactly role off the tongue. Alientrap’s last game was the very well received Capsized and Apotheon certainly gives a striking early impression, but does it last?

Zeus has had enough of humans and has cut them off from all the goods the Gods deliver. You play as Nikandreos, a human who can handle himself and who Hera (Zeus’ wife) chooses as her champion to dethrone her husband. She sends you up to Olympus in secret to acquire the powers of the other gods and finally take out Zeus himself.

You do this on a 2D Metroidvania style map. Now, I don’t mean Metroidvania as in you’ll gain a double jump and this will allow you to access areas you couldn’t before. Apotheon is more linear than that but as each map opens up you’ll have multiple objectives to complete and there are hidden areas which you can open by finding a hidden switch or blowing up a weakened wall. You do gain new abilities as you progress but they are primarily minor buffs rather than game changing abilities. Similarly you can pay money to NPCs to upgrade your armour or your ability to use the different weapons.

You’ll need all the help you can get too as you will be fighting a lot over the course of the game. The combat is slightly unusual and takes some getting used to. Like Dark Souls your attack is on R2 and your shield is on L2. This allows you to have both thumbs free to use the left stick to select the type of attack (overhead, stab or underarm) and the right stick to aim in a full 360 degree arc. You’ll have numerous weapon types to use from swords, hammers and spears to bow and arrows, javelins and throwing knives so you have lots of options to take on the many foes you’ll face. Weapons have durability which sees them vanish once broken but you’ll be picking up new weapons all the time so this isn’t an issue and is just another thing you have to get used to. 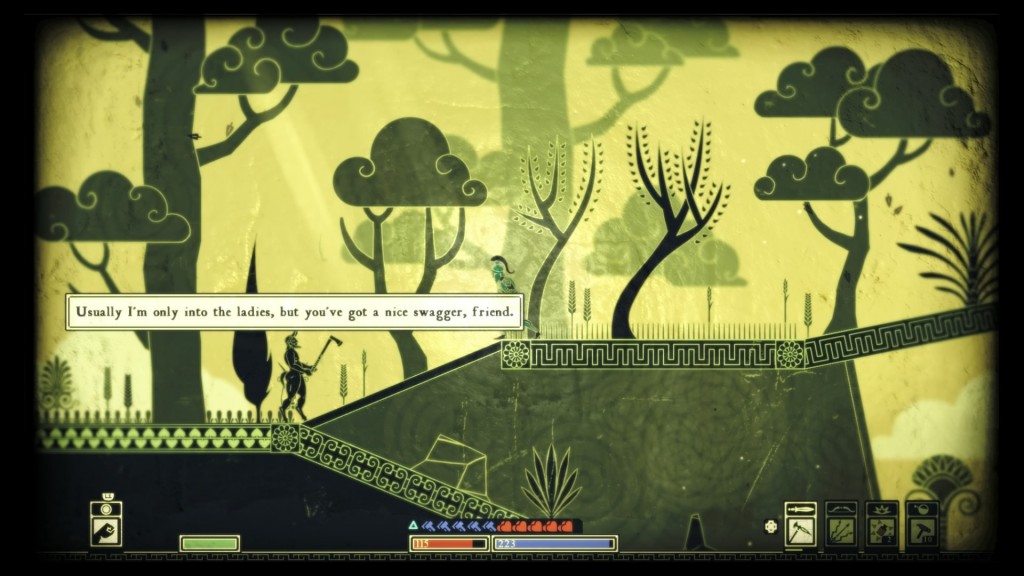 Apotheon isn’t a one trick pony however, sure you’ll be doing a lot of fighting but as well as some minor platforming there are areas based more around puzzle solving. Certainly many of the boss battles aren’t just straight up fights and have interesting twists and are a real highlight of the game.

I’ve got this far without mentioning the unusual visuals. Influenced by Athenian vase paintings there is a clay-like texture to the backgrounds and all the characters are incredibly flat representations of the human (or human-like) form. The images accompanying this review have probably caught your eye and rightly so and it really works thematically. It does mean some of the animation looks a little bit like your typical Flash animation rather than trying to be realistic but again, it’s something you get used to and it fits in well with the visual style they’ve chosen.

There are a few imperfections that threaten to spoil an otherwise excellent package. The combat can frustrate at times as your weapon has to strike the opponent, not just the animation for the attack and as you’re playing on a 2D plain enemies have a habit of walking inside your swings and occupying the same space as you and just in general things are a little floaty, where certain attacks can send you or enemies flying. Also there are some problems as far as crashes go. I’d heard of them before I started playing but I was fine apart from on one occasion where initially after a boss fight (so I had to repeat it) it just kept crashing over and over. Once it did allow me to continue I had no problems again. There are also a couple of glitched trophies at the time of writing if that sort of thing interests you. 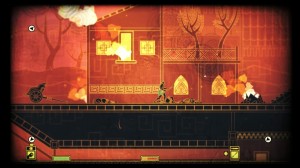 Overall Apotheon is a really enjoyable game. There are a enough differences to keep things interesting in a familiar genre, the bosses add an extra wrinkle to the formula and the visuals set it apart from the crowd. It’s not the longest game but if you’re wanting to 100% it you’re looking at a good 10-12 hours of entertainment and it’s definitely worth your time.

Apotheon
8 Overall
Pros
+ Great boss battles + Stunning visual style + Enjoyable combat
Cons
- Combat can be a bit fiddly - Prone to crashes
Summary
Apotheon is a really enjoyable game. There are a enough differences to keep things interesting in a familiar genre, the bosses add an extra wrinkle to the formula and the visuals set it apart from the crowd.