From two-man Ontario based developer Milkbag Games comes FutureGrind and we’re immediately reminded of the SNES game Unirally (AKA Uniracers) in terms of the side-on view. Similarly, comparisons can be had to any number of autorunners where the screen inexorably scrolls from left to right. It’s also done in Unity, the game engine that is currently dominating indie game development. 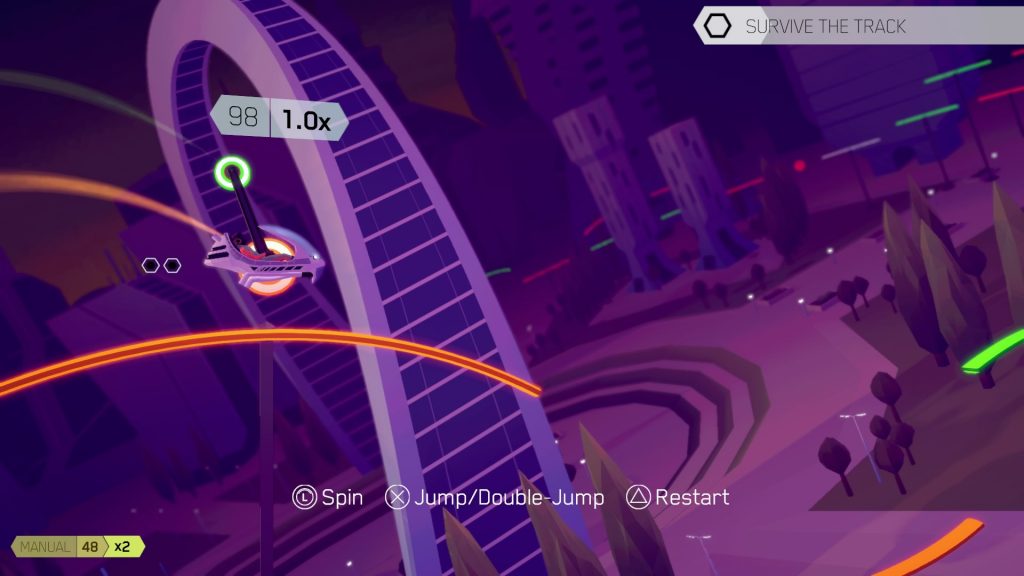 Thankfully FutureGrind turns out to be a break from the norm and is an early contender for one of our indie games of the year. Yes, it’s only January but it’s that good.

Viewed from a pseudo-3D angle, you’ll negotiate several different themed areas to please sponsors represented by a small disembodied face you see in the menus. Once you’ve completed a successful run of a level, you’ll unlock two extra objectives that at first you won’t give much priority to. Later levels won’t unlock without your having completed them eventually. They’re effectively a tutorial for the score attack you unlock on each level after completion too, no bad thing as you could well fall into the trap of playing it really safe each level. 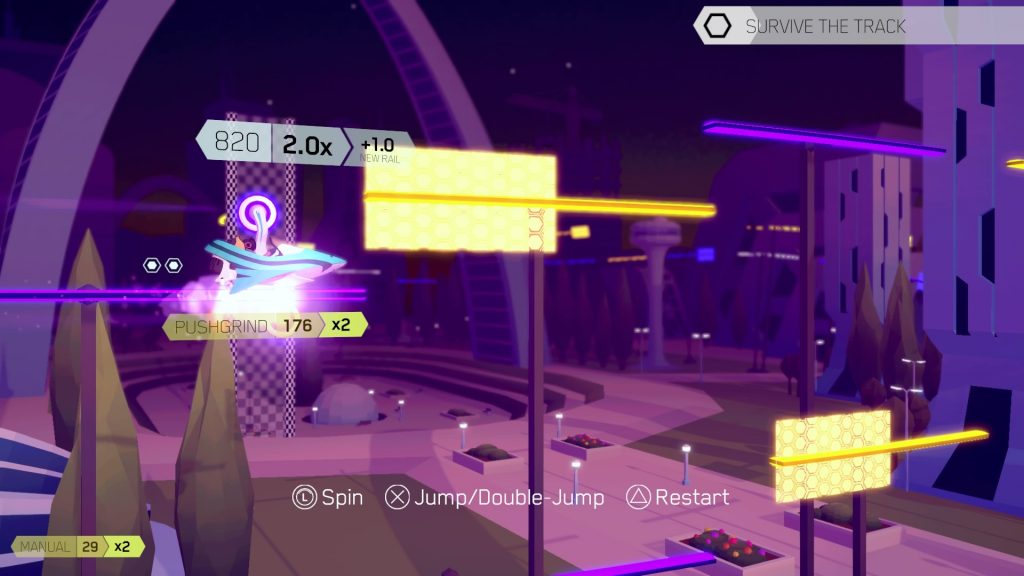 The gameplay itself is all about stringing together various tricks, not too dissimilar to the likes of SKATE or Tony Hawk (back when it was good anyway) with grinds, manuals and and jumps aplenty. Further complicated by levels made up of three distinct sector types, alternating between two differing colours that you must match to the wheel that makes contact with them or fail in a neon-tinged explosion. You get a pass if you hit a white sector but in doing so, you’ll reset your multiplier.

In addition there’s jump orbs that are colour matched, so you have to hit them with the correct coloured wheel or fail an attempt. There’s also rail swap rings which swap the colour of all the rings that follow, sometimes chained together in quick succession so you need to keep switching colours as quickly as they change. 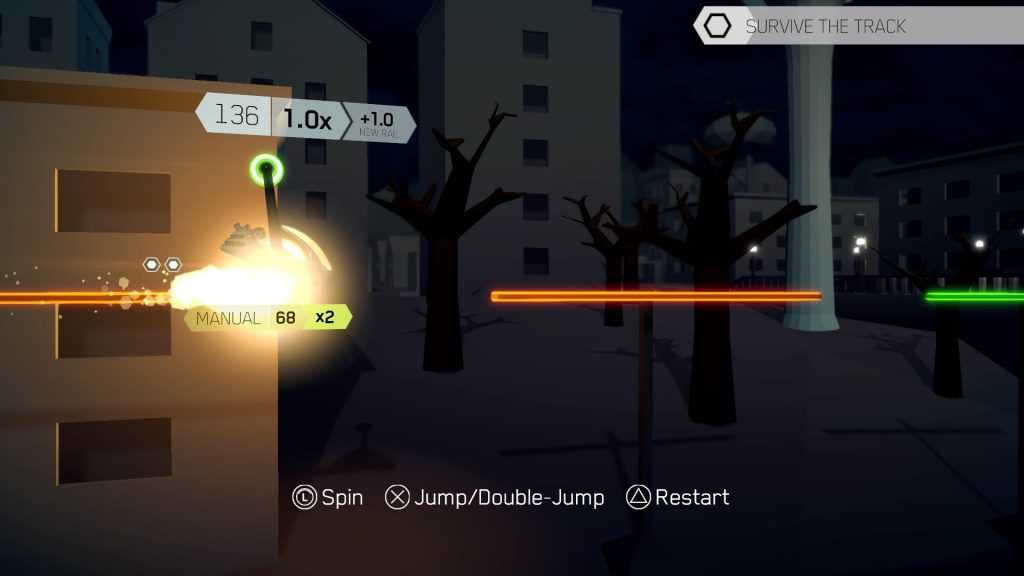 At first you’ll struggle to orient your bike and will barely manage to scrape through early levels. But as you continue through the levels you’ll gain an almost intuitive feel for traversing successive stages. None of the levels feel like they’re punitively hard anyway, any mistakes you make are likely going to be your own doing.

The initial bike you’ll get has two wheels of the same colour and a double jump. However, the colours of the wheels can be changed by running through colour zones. Subsequent bikes have different characteristics ranging from one large wheel and one small of different colours to a bike that won’t tip over without your input. Our favourite doesn’t have the best jump height but it can chain jump three times, leaving each subsequent jump to the last second being the key to getting a large bonus. 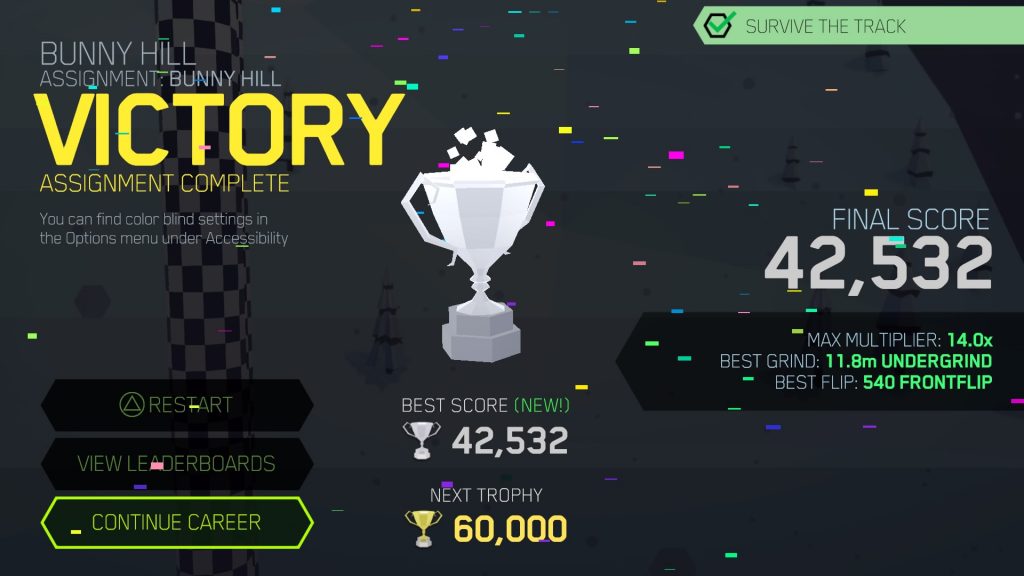 Unless you’re someone who’s not as ham-fisted as this particular reviewer, you won’t be racking up high scores at the outset anyway, just getting through the levels will be achievement enough. Eventually you’ll nail levels without much trouble, though getting a platinum cup on a score attack is another matter, let alone 30 across all the levels in the game. You’ll keep going back again and again to nail a high score, we know we have. And look, it’s one in the morning again.

There’s a plot of sorts with vaguely sinister corporate goings on and what seems to be some sort of hacker wanting to bring down the system from within. Some levels are designated hack exploits and an opportunity to make contact with a hacker upon successfully completing a minor objective. We’ll spare you the details, but to be honest in a game of this sort you’re not here for the storyline. The gameplay is more than enough and doesn’t need the glue of a story to hold it together particularly. 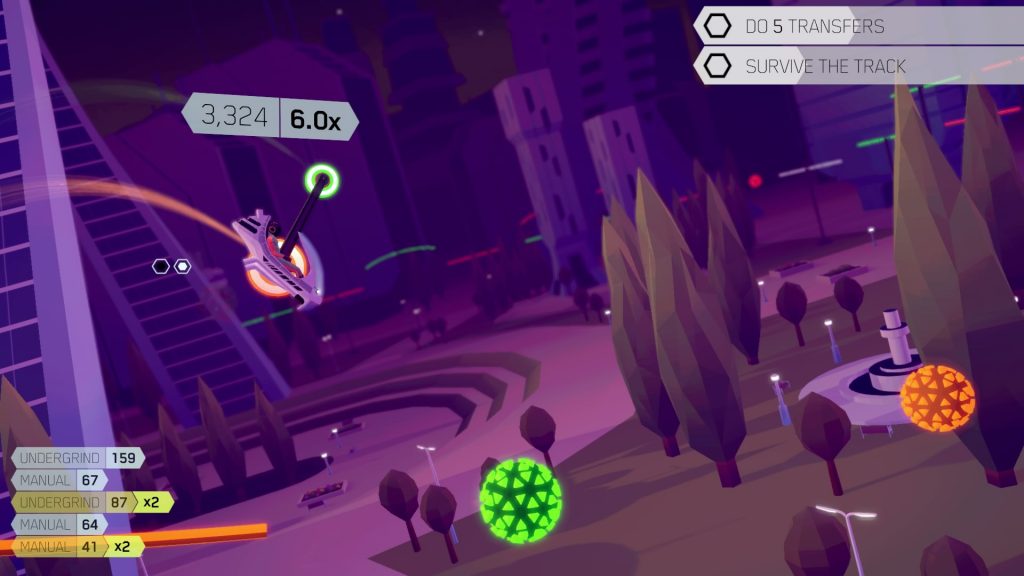 Alongside the sharp graphical style as illustrated in the screenshots you see peppered throughout this review, there’s also an entertaining musical soundtrack you won’t feel compelled to turn down. It adds to the mood very well, some tunes being available as an EP on Bandcamp.

If we have any criticism of FutureGrind, some bonus objectives can immediately reach a fail state by one fluffed input. Never mind if you’re doing really well on a stage otherwise, it feels a bit harsh given you’ll sometimes have multiple opportunities to reach said objective in a level. One rapid tap of

is enough to restart an attempt thankfully. There’s no load times to speak of so it’s a seamless experience.

In conclusion, FutureGrind is a great concept, well executed that’s addictive as hell with it. We recommend it highly.

Cons
- Immediately failing on some bonus objectives can feel punitive
- Story isn't really necessary when the game is otherwise so strong
Summary
FutureGrind is a fantastic, addictive stunt-racer that you really need to play.