Sticking to their usual modus operandi, Finnish publishers Ratalaika Games are back with another cross-buy, two-platinum trophy rinse with Heroes Trials, which is best described as an adventure game although it does dip its toe into RPG, arcade combat/shooter and exploration genres.

It tells the tale of siblings Elia and Zoel who are trying to be the new heroes of their homeland.  To rise to this hallowed position, they need to complete various trials in order to prove themselves and these generally involve going somewhere on the map and either finding an item or killing a boss. 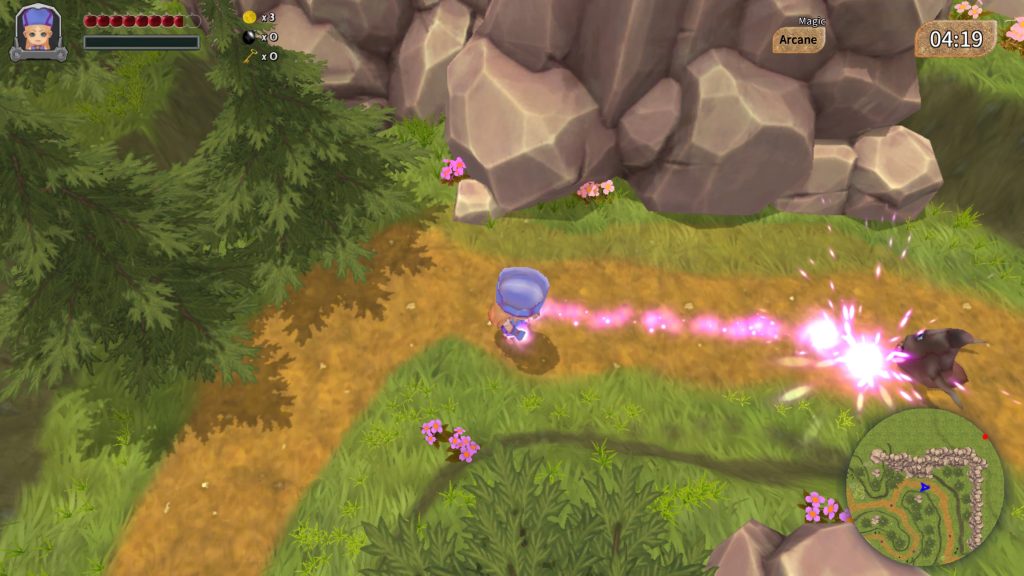 In the game’s press blurb it describes itself as an RPG but with all the grinding removed and that is relatively true but, as we came to find out, that’s not all that has been removed.  As we said.  This is an adventure game with a few other elements but these are so barely touched on that it barely counts.  On the face of it, Heroes Trials is riffing off of early Zelda with its top down viewpoint and cute aesthetic.  However, a Zelda contender this is not.

The game world is pretty small and you are given a red marker on a map to get to and a time limit in which to do it.  The time limit thing is odd because it’s not severe enough to ever be a real consideration, or add any additional challenge, but equally it does remove the desire to explore.

The only barrier to you getting a three star rating on each mission is that sometimes you are presented with a crossroads and then you have to figure out where to go next (usually firstly to a key and then to a gate in some other direction).  While there is a mini-map when you are outdoors, there isn’t for missions that are in caves and buildings so you will be running around figuring out where to go a fair bit. 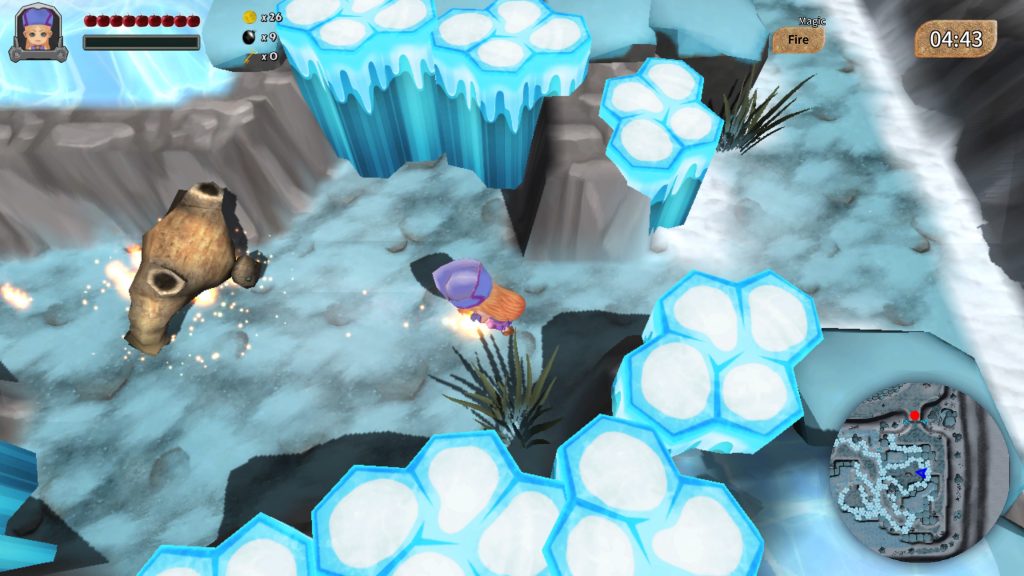 While the game claims to have RPG leanings, these are so thin that it actually hurts the game a bit putting them in there.  For example, you can pick up money by smashing vases or killing enemies but spending it is tricky because the one shop in the game only sells two items.  The first is some boots that let you run faster (that cost 250 of whatever this world’s currency is, which is quite a lot) and the second are replacement bombs, which are a weapon that Zoel uses that you never really have a problem finding ammo for in the game world.

When I finally got to 250 I was on a mission and then ran into a character who stole all my money and even when I beat them later on, I never got it back.  However, the boots wouldn’t have made any difference to anything anyway because they absolutely don’t matter and the extra speed you get isn’t that fast as I found out when I went back to an earlier save in order to get them.

The other major problem with the game is the combat.  You control one sibling at a time, switching them out on the fly with the

button.  Elia is a magic user which means she fires off ranged attacks, and can lock in her direction with

, while Zoel uses his sword and shield in combat. 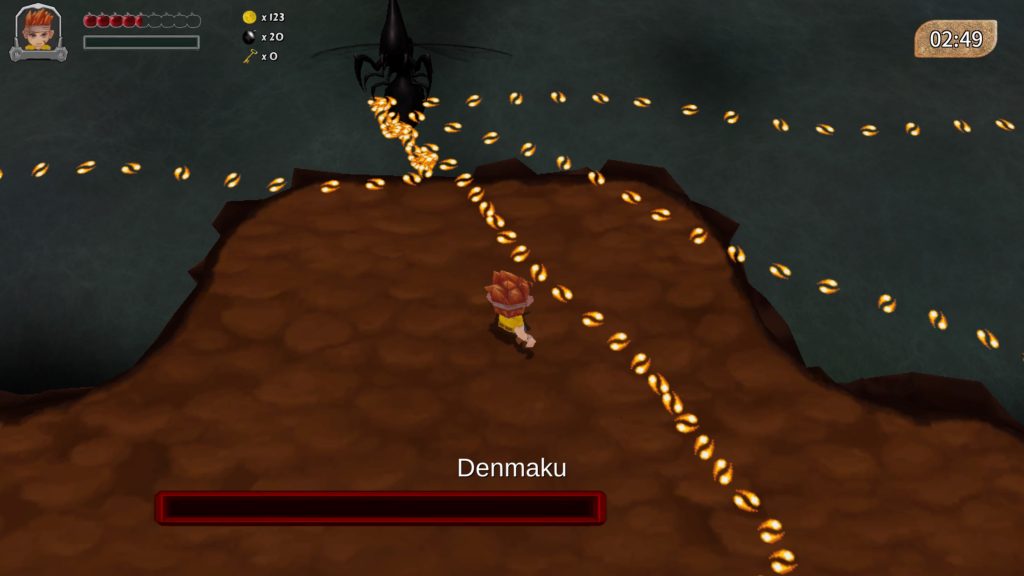 Elia is by far the most useful but the control on her is pretty sloppy.  Trying to pick out a direction accurately is oddly tricky (why not just use a twin-stick control method?) but it’s not a problem because the enemies are absolutely useless at fighting for the most part.  She does get a charged attack and four types of magic but the charged attack is useless and the four types of magic don’t seem to have different attack strengths and are instead used for very basic puzzle solving.

Zoel is worse though.  At no point did his basic sword attack seem like anything but a terrible option and one that you never need to use.  His shield is only useful in one battle and again completely optional.  The bombs he unlocks later on are used to open up one area but do come in handy in some boss battles, so that’s about as useful as he gets.

The handful of boss battles you get are probably the best things in the game.  None of them are impressive or particularly good but they represent the only decent challenge in the game.  The final boss battle (which you’ll reach in a couple of hours) was initially tricky because it doesn’t explain itself but once you figure it out, he’s pretty trivial to beat.  The story’s conclusion isn’t very satisfying either. 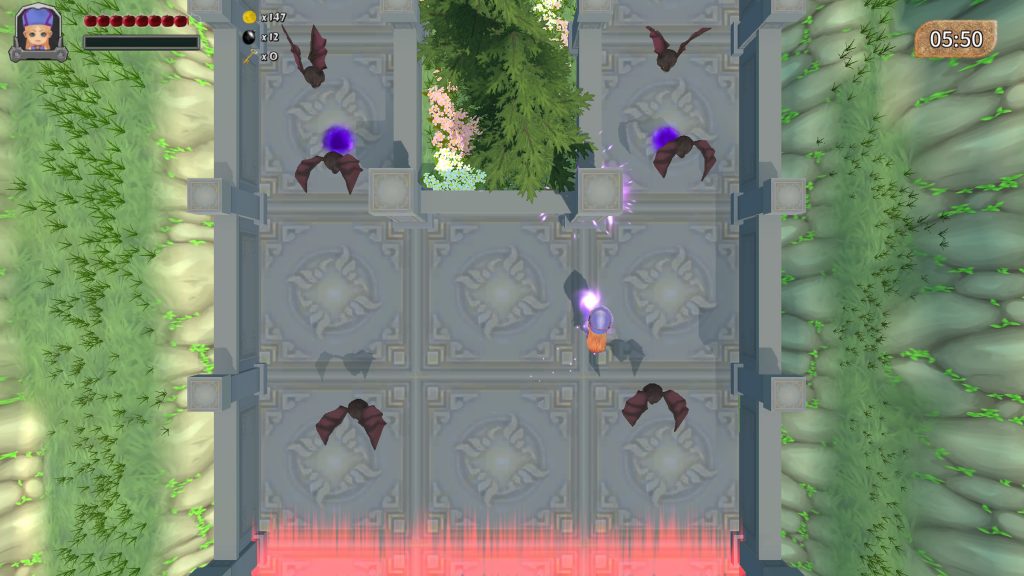 So for an RPG to have weak combat, compromised exploration and the thinnest of loot games obviously isn’t great.  The story is nothing to write home about either and is really just a few text boxes along the way.  Even the game’s name, Heroes Trials seems off.  Hero’s Trials, Heroes’ Trials or Heroes: Trails would work but they’ve somehow picked the worst option there too.

In terms of presentation, things don’t get much better.  The characters look like Nintendo avatars, the environments are both ugly and powerfully generic (you even get a lava level and an ice level) and the PS4 version is in need of some anti-aliasing.  It looks better on the Vita by virtue of the smaller screen hiding some of the sins but this is a poor looking game.

The music is a mixed bag with some nice pieces of music mixed in with some horrible generic 16-bit era forgettable pieces.  The basic spot effects are forgettable and there is no voice acting, so there’s little to write about here and even less to get excited about. 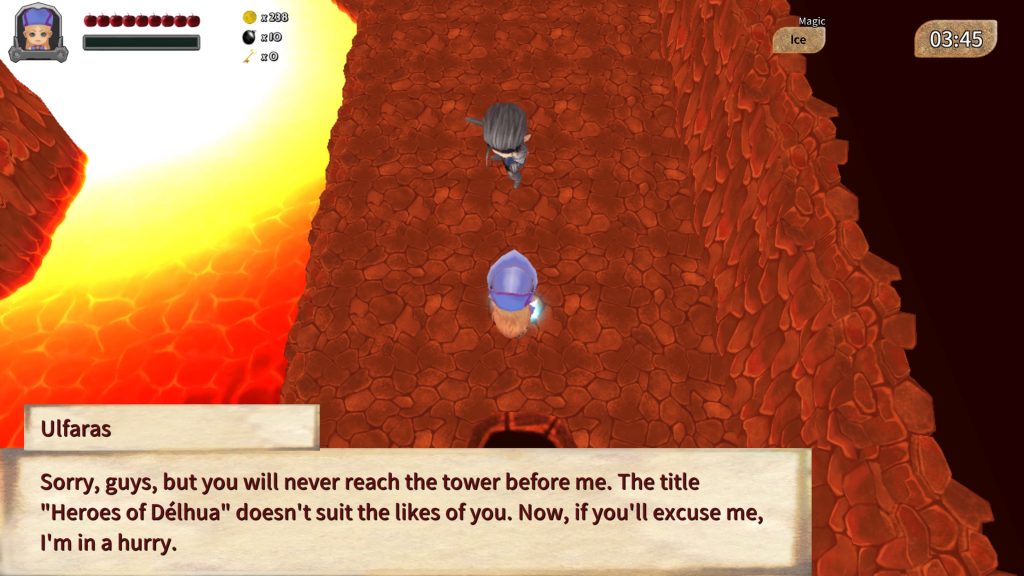 What you do get is two easy platinums for your money.  Like many Ratalaika games, you’ll get the platinum way before you finish the game leaving little incentive to keep playing.  There are a couple of missable ones in there but these are easily mopped up within ten minutes of restarting the game if you do accidentally swerve them.

Ultimately, what you get here is a game that sort of looks like an old-school RPG but with graphics that wouldn’t have won any awards two generations ago and with just the minimal amount of gameplay to make Heroes Trials count as a finished game.

Heroes Trials
3 Overall
Pros
+ Cheap
+ Has cross-play
Cons
- Weak combat
- Weak exploration
- Weak trophies
- Weak visuals
Summary
While we really appreciate the idea of taking an RPG and trimming off all the fat, in doing so Heroes Trials has also accidentally taken out all of the choice cuts too and has left you with the skeleton of a very generic game with nothing in there to make it worth your time or money.  One for platinum hunters only.