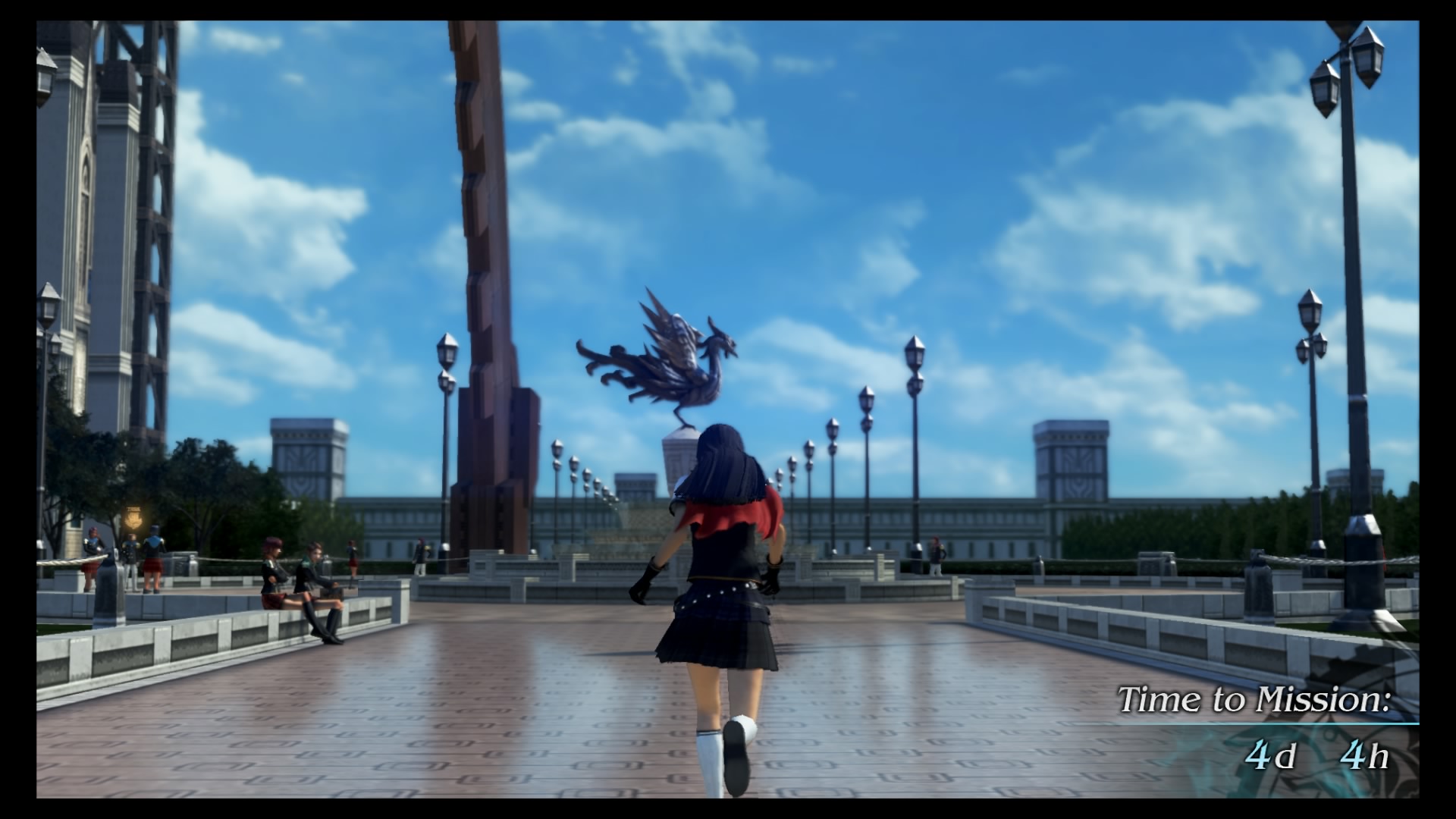 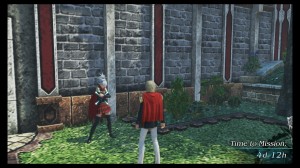 Final Fantasy Type-0 HD is part of the Fabula Nova Crystallis series of Final Fantasy games. What that means is that it shares the same mythos as Final Fantasy XIII and its offshoots and the upcoming Final Fantasy XV. Does any of this matter? Other than characters talking nonsense about l’Cie and the like, no not really, but knowing it has links to XIII both in concepts and when it was originally released can give you an idea as to how much you’ll enjoy the story and characters as they are of similar quality. I don’t.

Type-0 was originally released in 2011 on the PSP in Japan only. This HD version makes some changes for the PS4, some for the better, others not so much. First I’ll touch briefly on the set up.

Four nations have four crystals and one nation is trying to get all four crystals under their control by force. Each crystal gives each nation certain powers, for example the country your characters are from has access to magic, whilst the nearest rival has powerful machines. Your country has a school for soldiers, a Japanese Hogwarts if you will and you control the whole of Class Zero. That’s fourteen characters altogether. They are the country’s best soldiers and they get caught up in a load of politics and…yeah, the story’s not great.

Type-0 also continues the trend of terrible main characters in recent Final Fantasy games. Pretty much all of Class Zero are awful and poorly acted, there are super annoying cutesy girls, dude bro guys, angsty teens or cold, know it all ones. The least annoying ones are dull and the most forgettable. Two characters who join you early on have the biggest story arc and I can feel the writers wanting me to care about them and feel a connection but they are terrible human beings right from the off, I actively dislike this person so I’m not going to feel anything when you pull out a major plot point. Square Enix need to drastically improve in this department and from the FFXV demo it seems we might have to wait longer still.

But what does it play like? The meat of the game is in the combat. This is real time and you have full control of your character like a rather basic action game. You can lock on to enemies, dodge with the circle button, do a basic attack with square and have spells or specials mapped to triangle and cross. If you play it straight then there’s no real depth to the combat as you slowly chip away the enemies health and hopefully dodge out of the way of their attacks. However there are some mechanics that take a little more skill to pull off but make you far more powerful. Break sight and kill sight are enemy states where they are vulnerable either during an attack or afterwards and if you strike in that moment then you do high damage in the case of break sight or instantly kill the enemy if it’s a kill sight. These techniques turn what could have been a so-so button masher into something more tactical which is a lot of fun.

Only three party members are on the battlefield at once, you controlling one and the AI controlling the other two but you can switch between them at any point and if one dies you can call in another character from your reserves but it will effect your mission rating. Each character is unique in their combat style with even characters with similar weapons playing differently, like with the two gun wielding characters where one has pistols that require reloading but the other has magic pistols where the bullets move slower. 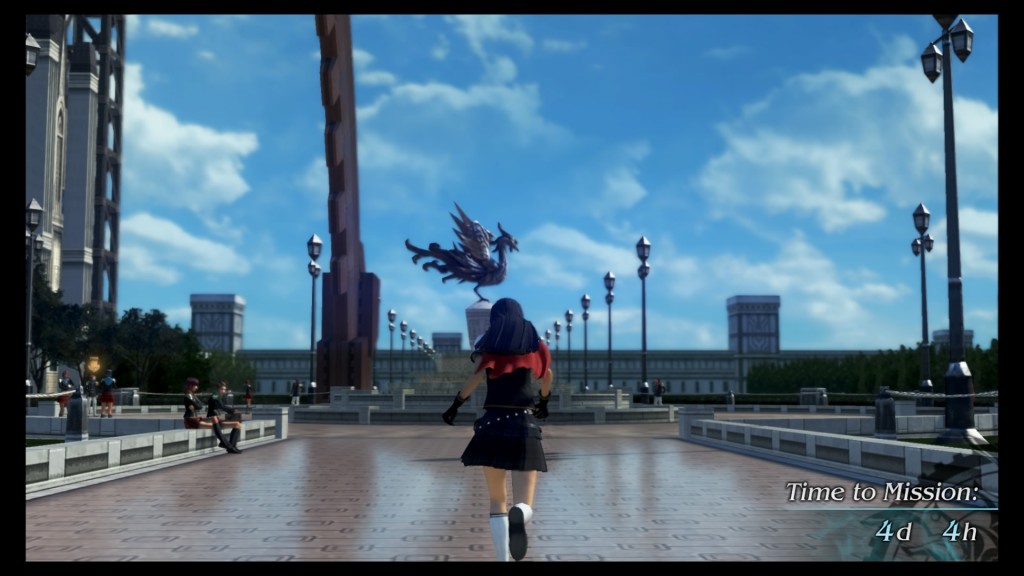 The environments you fight in are very small, so if you’re fighting your way through a city it will be lots of small sections separated by load screens (which load very quickly to be fair) and is obviously a carry over from the game being on PSP. That’s not the only thing carried over. The graphics are really quite poor, with weak textures and flat uninteresting areas. A lot of the more important characters have had their models improved for the PS4 but that’s it, though thankfully as you’d hope the game runs smoothly. As you’d expect from an FF game the soundtrack is also generally strong.

Outside of battle you can move around the school talking to people, accepting quests and buying things. Between missions you have a set amount of time to use and different activities take different amounts of time. Talking to people with exclamation marks over their heads takes two hours and leaving the school takes six hours. There will always be more things to do than time to do them, which is supposed to encourage multiple playthroughs (the game even keeps track of the amount of completions at the save screen) but I found it to be needlessly limiting. On top of that you can only accept one side mission at a time, so even though there may be five available if two involve killing a certain amount of specific enemies then you can only achieve one at a time, costing six hours each if you have to leave the school to do them. Again it’s so you can do anything you didn’t do first time a second or third time but I just found it to negatively effect the gameplay as I was constantly double checking everything so I could try and use my time efficiently where as I’d have liked to be able to explore at my leisure.

Whilst you’re on missions you can gain sub-objectives which you can accept or decline. Accepting it gives you a minor boost for a brief period but if you fail to, for example kill sight two enemies using magic, then that character is killed. You do have a chance to escape as the character is killed by three portals appearing under them so if you dodge out of the way then you can avoid your fate but it’s quite difficult and as with the time limits on free time the extra missions could have been designed so much better. You have to press the touch pad to look at the SO, which means you stop playing, they also don’t appear straight away so you might have killed a load of enemies before getting an SO that asks you to kill enemies in a certain way and there aren’t enough left, or your AI team mates may steal kills required for the SO. I ended up just ignoring them a lot of the time, or just being pissed off by them which is a shame as you get decent rewards for completing them. Just having optional objectives that were always active that didn’t kill you if you failed to achieve them would have been so much better. 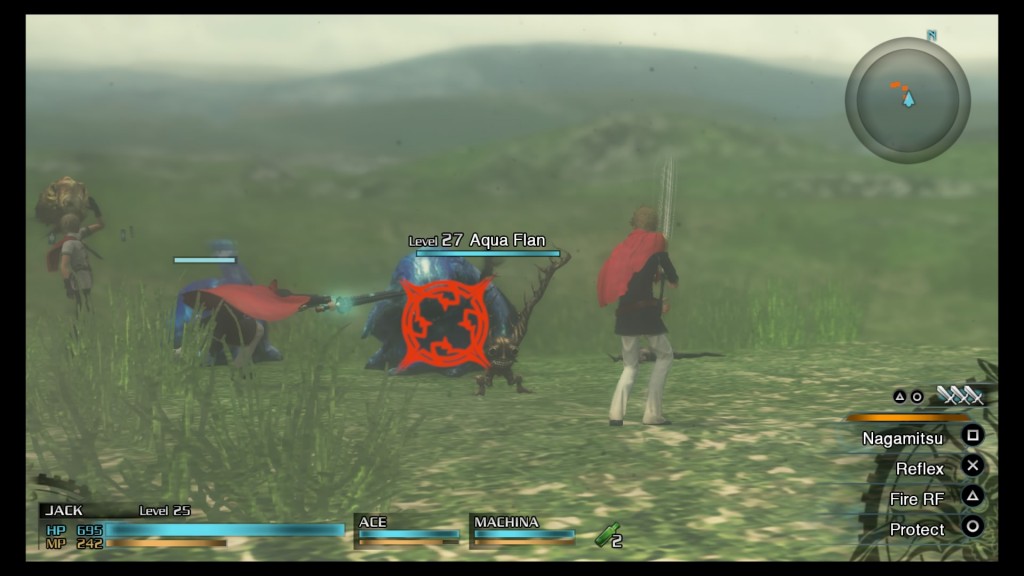 As you may remember the PSP didn’t have a second analogue stick so now with the PS4 pad you’ve been given full control of the camera…and it’s terrible. Moving the camera blurs the screen to within an inch of its life and there’s no real analogue control, you’re either moving the camera at a million miles an hour or not. Similarly the characters are either in a full run or stood still and that combined with the camera makes exploring areas a real chore as it’s incredibly difficult to just look around.

The PSP version of the game did have online which allowed others to join in your game taking the place of one of your team mates but that’s no longer in the HD versions. Instead you have support personnel which if turned on will have random AI characters jump in instead, named after a member of the development team. Using these characters gains you SP which you can use in a specific store to buy things and they may be higher level than you which will help you out but they can also be a lower level and if you use these characters then your main characters don’t gain experience and end up falling behind the curve. Another feature that it feels is better left alone.

There are some basic mini-games such as a strategy game for taking over towns which involves using units to storm places whilst your character helps out and a game for shooting enemies out of the sky with your airship but they are just that, mini-games. 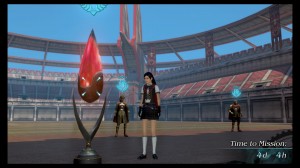 Final Fantasy Type-0 HD will live or die based on how much you enjoy the combat. The story and characters are poor, the mission structure is restrictive to the point of sapping some of the fun out of the game and just the basic movement and camera controls could have done with a lot of tweaking before release. However, the combat is fun, varied and quick paced. You’ll have favourite characters (not for their personalities but for their fighting style) and you can develop them as you like with the levelling system. Unfortunately there are lots of systems that drag the whole experience down, either by slowing down the gameplay or frustrating the player by limiting how they play.

Final Fantasy Type-0 HD
6 Overall
Pros
+ Combat is fast and enjoyable + Replay value + Good music
Cons
- Awful characters - Sub-PS3 graphics - Time limits and quest design is needlessly restrictive - Camera control is vomit inducing
Summary
Final Fantasy Type-0 HD will live or die based on how much you enjoy the combat. The combat is fun, varied and quick paced. You'll have favourite characters and you can develop them as you like with the levelling system. Unfortunately there are lots of systems that drag the whole experience down, either by slowing down the gameplay or frustrating the player by limiting how they play.