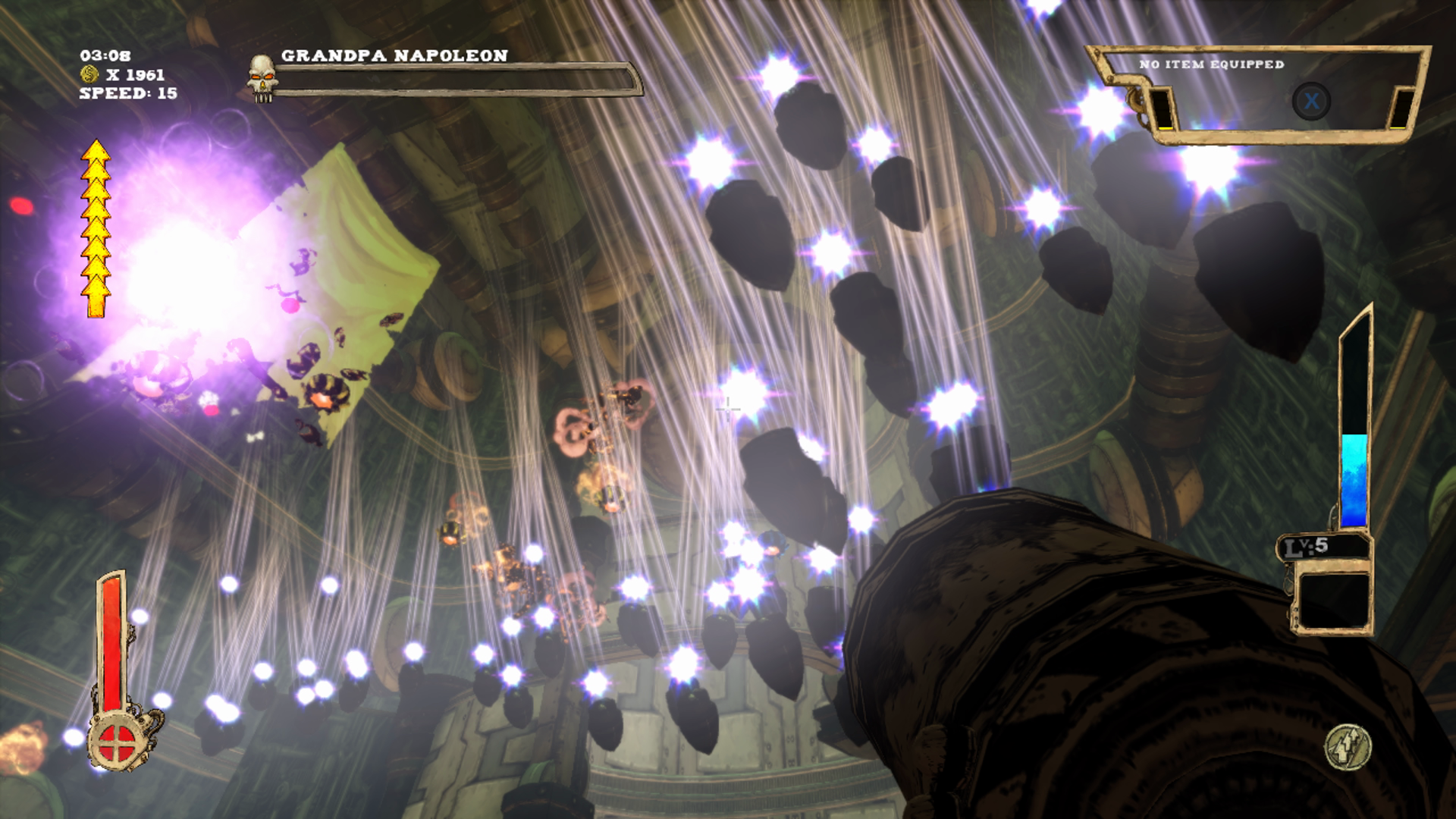 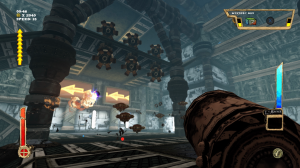 Having garnered a loyal fanbase amongst PC gamers, Tower of Guns has now arrived on PS4 (and the PS3) and is one of April 2015’s PS+ freebies.  A well-liked and respected Rogue-like FPS, Tower of Guns is a difficult game to review.  Thanks mainly because technically speaking it might be a little bit rubbish.  However, that’s not a huge barrier to getting some fun out of the game.

As with any Rogue-like, this is a game about death and progress.  There’s no plot as such.  Well, actually each time you play it, it throws a different plot at you but with no cut-scenes or narration, these are very easy to ignore.  They are pretty funny though.  In one play I was apparently a mouse on holiday.  Not that it matters as really you are just a person in an arena-based FPS.

The initial impression is that the game is a mix of Unreal Tournament‘s gameplay, Borderlands‘ visual style and a hint of Rogue Legacy‘s levelling system.  That’s not a bad mix as it contains the best FPS ever made, one of the most visually striking action games and elements of the only Rogue-like we’ve ever liked.

The idea is that you have to work your way up the tower.  Each floor is broken down into a series of smallish rooms.  Enemies tend to be machine-based.  Either turrets and missiles to the occasional odd robotic thing.  Each level also ends with a big boss. 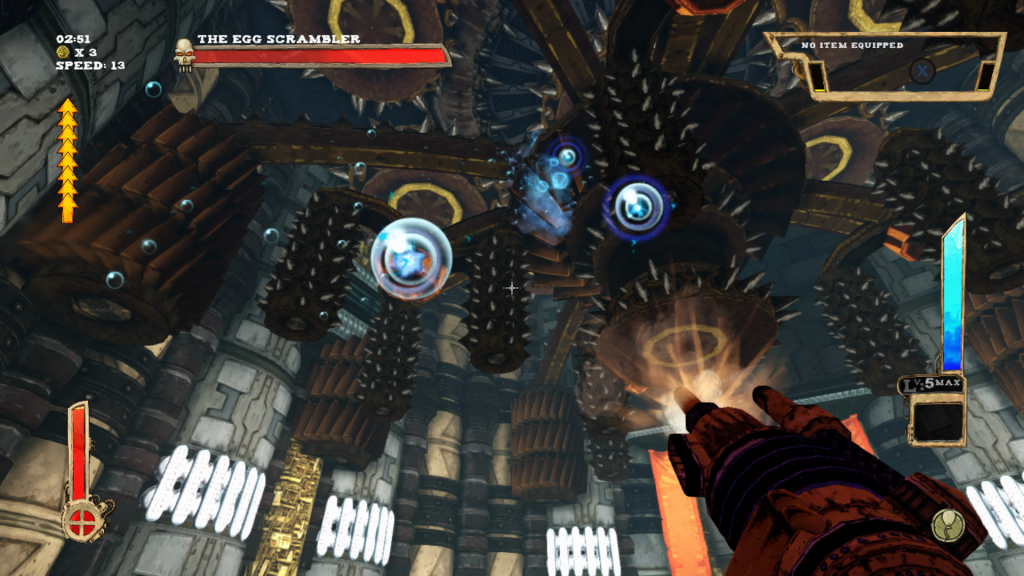 If you die, that’s it.  No lives, no continues, no saved progress.  You go back to the start but hopefully you’ll have met the conditions in your previous go to earn you a new weapon or perks.  These are kept once you unlock them, as you’d expect from a Rogue-like, but you also get to temporarily earn modifications and level-ups for weapons during your playthroughs.

After a tough start, we suddenly were making ridiculously good progress and then the frame rate started hindering us.  It’s like the difficulty curve is a little out of whack and eventually the game can’t keep up.  EDF may have had issues with framerates but it was a generation of hardware ago and was literally moving an entire alien invasion.  This doesn’t have that scope.  Also the perk and weapon unlocks all come a tad too easily and you can have many runs without making progress.  The great thing with Rogue Legacy was that you were nearly always progressing and unlocking something but that stops being the case here for much of the time.  Also the best weapon and perk are both unlocked quite early on, making the rest of the progress feel limited.

The biggest issue however is the feel of the game.  Weapons feel dull and unimpressive and your movement is somewhat spongey.  The physics feel a little bit ‘off’ and trying to dodge enemy fire can be quite imprecise.  You do get used to it but the pace is just a little slow and when an FPS lacks pace and precision, it’s generally not a good one.

Also, beyond the cell-shaded graphics style, the designs of both your enemies and environments are pretty average.  The bosses tend to be a tad more interesting though but we did also notice some heavy frame-rate slippage at the point where the game started getting really difficult. 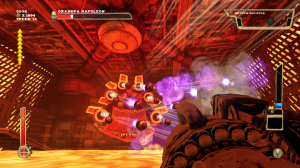 That said, the game is pretty addictive.  We spent much of our time with it searching for secrets (most of which are nearly impossible to find by the way) or just trying to unlock our next perk and there is a lot to be said for that.  If the game was a total dog, we wouldn’t have been bothered but we do wish it was a bit sharper and more dramatic.

We certainly like the attitude of the game and you can’t argue with the price (currently free) but if you’re going to step up against games like Unreal Tournament, you’d better bring your A-game.

Tower of Guns
6 Overall
Pros
+ Simple, addictive gameplay. + Mods, weapons, perks and power-ups add some variety. + Easy to get into.
Cons
- Average presentation. - Launched with buggy trophies. - Frame rate issues. - Unsatisfying combat. - Not very exciting for a game with so many guns in it. - Difficulty curve seems a bit front loaded. Hard at first and then all too easy.
Summary
Tower of Guns is pretty addictive and will keep you engaged for the few hours it takes to finish but it feels slow, floaty and a bit underwhelming. For a game based around all these guns, it's all a tad dull at times.