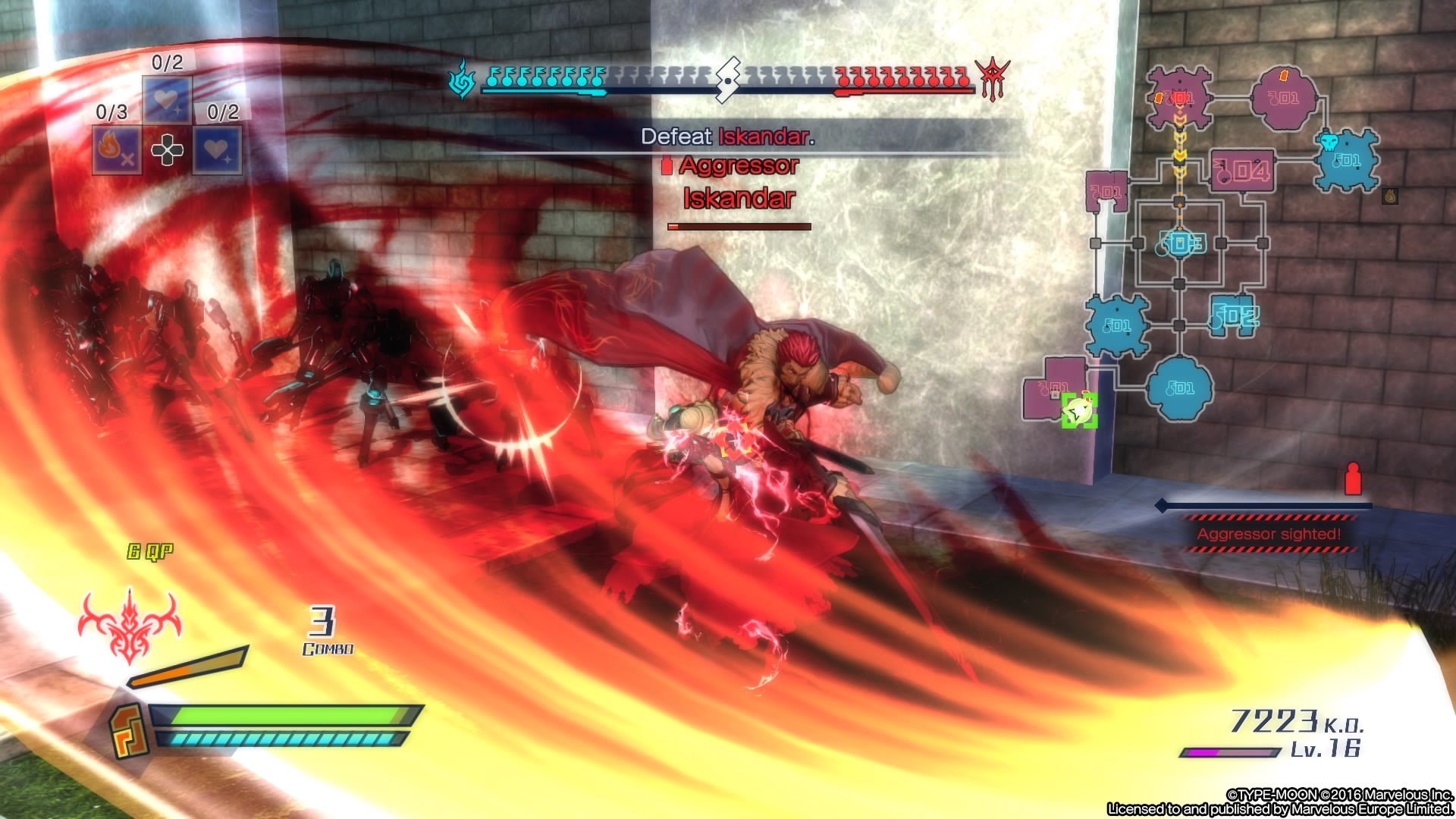 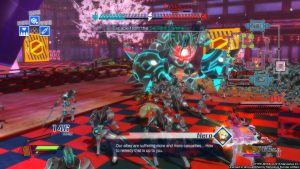 Fate/Extella: The Umbral Star is a new game in the musou genre and shifts the action from feudal Japan to a sci-fi themed moon, dubbed the holy grail, which sees you fighting against giant robots and historic characters such as Alexander the Great and a sexy female version of Attila the Hun.  This is the most anime game ever.

Musou games are an odd genre typified by the Warriors series by Koei Tecmo.  They see you managing your battlefield tactics while beating up hundreds of enemies in a third person brawler style.  Fate/Extella does little to deviate from the template laid down and it immediately feels very familiar.

I’ve played a few musou games and the combat is always the star of the show.  The way standard grunts can be cleaved through makes for visually arresting games.  Fate/Extella’s standard grunts are a sort of bland robot type, all neon and metal.  Each sword swing will see them fly into the air in an explosion of colour.  Defeat enough of these and the aggressor robots will appear, these are effectively mini bosses and come in a few different flavours.  Defeating these will grant you territory and then you can move on to the next part of the map to do it all again, with a final boss being activated once you’ve done the leg work.

The combat here is definitely lacking the nuance of a more focused fighter, opting instead for speed and exuberance.   The standard heavy or light attack can be chained for simple combos and successful hits here build up a special move gauge.  Activate this and your character can transform into a stronger version allowing even more grunts to be destroyed with ease.   All of the action is carried off in an over the top way and the screen is frequently covered in special effects and bodies.  Despite how frantic the action got there was never a moment of slowdown. 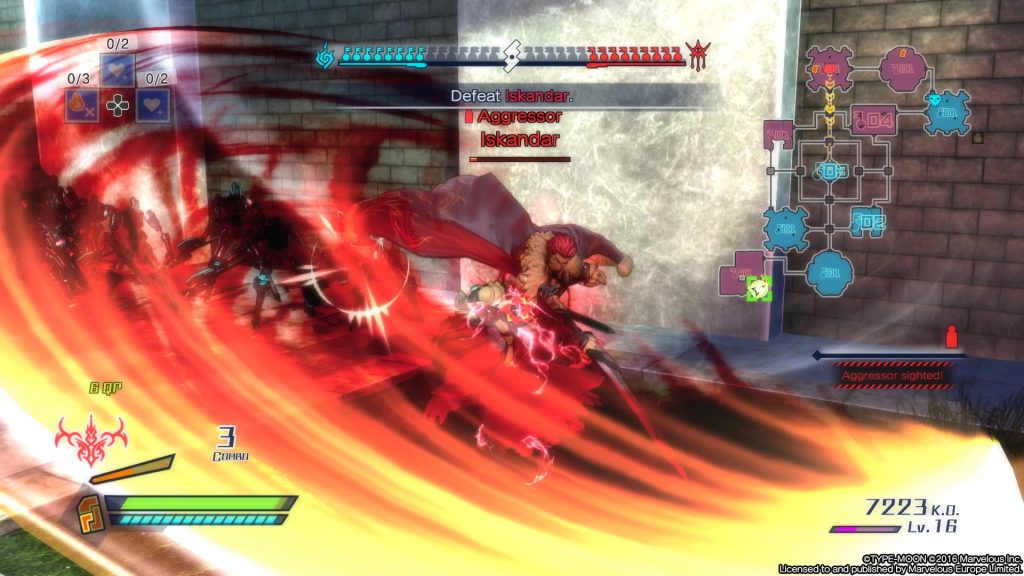 The thing I like about musou games is that they are more tactical than meets the eye.  It’s not just a simple case of defeating the grunts, as fun as that can be, but it’s about controlling territory and reacting to the battle movements.  The maps are split into combat zones which are linked via fast travel.  Each combat zone has a value which is added to total of the side which controls the zone, the battle is won once a certain value of territory is controlled.  Zones controlled by one side aren’t safe and will change side with the general flow of the battle.  This whole territory control scheme is overlaid with the need to achieve certain objectives, which basically boil down to defeat a certain boss or object.  The combination of battle management on the micro and the macro scale really is the greatest strength of the genre.

Overlaying this whole tactical aspect there is solid anime story.  There is a fully developed anime and previous games to add context here, and frankly the bizarreness of the story would benefit from previous knowledge.  Fate/Extella references AI programs, the Holy Grail, Gilgamesh and Joan of Arc to name a few.  I was well out of my depth here.  However cutting to the chase and the story is basically one of a war between two sides, told via lots of Japanese voiced characters.  There is a lot of story here and I was easily spending the same amount of time reading the story as I was fighting.  Being as it is an anime game there is a relationship aspect to the game where you can build up your bond with certain characters, get this to a required level and you’ll see the characters get more skills or you’ll be able to craft new items. 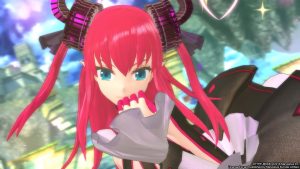 Overall Fate/Extella is a decent game, the quick and extravagant combat gives the game lashings of style and visual flair.  Unfortunately the lack of depth to the combat leads to repetition setting in and the story is definitely not for the uninitiated.  This game fits well with the other musou games available for the PlayStation 4, and while it’s not the best one of the bunch it’s decent while it lasts.

Fate/Extella: The Umbral Star
6 Overall
Pros
+ Over the top and exuberant combat + Solid anime story + Nice strategic depth to managing the flow of battle
Cons
- Combat is a little simple - A prior knowledge of the series is almost a requirement - Enemies are very samey
Summary
Overall Fate/Extella is a decent game, the quick and extravagant combat gives the game lashings of style and visual flair. Unfortunately the lack of depth to the combat leads to repetition setting in and the story is definitely not for the uninitiated. This game fits well with the other musou games available for the PlayStation 4, and while it’s not the best one of the bunch it’s decent while it lasts.