Demoniaca: Everlasting Night is the latest title from budget kings EastAsiaSoft.  A port of the 2019 PC game, Demoniaca is a gothic metroidvania that combines a dark aesthetic with an unusually complex fighting system.  The overall effect being a mix of Dead Cells and King of Fighters.

The story is a tale of vengeance.  You play as a woman who decides to take on the demon-infested Tower of Babel after they destroy her village.  Luckily, or unluckily, she’s been contaminated with demon blood and so has the strength to take on such a task.  However, that will only get her so far as the denizens of the tower are skilled and deadly opponents, giving this game at least a touch of the Souls. 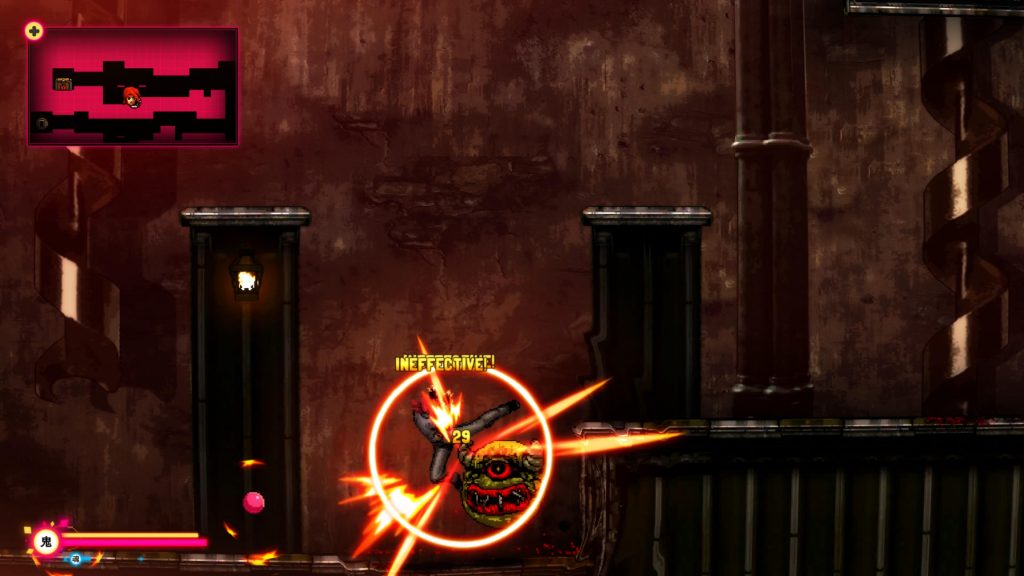 The metroidvania tag means that yes, you’ll be travelling from room to room and looking for the exit to take you to the next area and sometimes that exit will be behind an usually strong door, or a deadly barrier or, as you’d expect, just beyond your jumping range.  It’s standard stuff but mercifully the tower itself isn’t an enormously sprawling structure.  There’s plenty of backtracking but at least it doesn’t feel insurmountable.

The controls really show you where this game’s priorities are.  As a 2D game with platforming elements, you’d expect jump to be mapped to one of the face buttons but instead it’s somewhat awkwardly set to

.  That is because the four main buttons are set to light and heavy kicks and punches.  Kind of like a four button mix of Street Fighter 2 and Mortal Kombat.  The shoulder buttons expand and contact your map (

).  The latter is where you get to see your inventory screen, status and map. 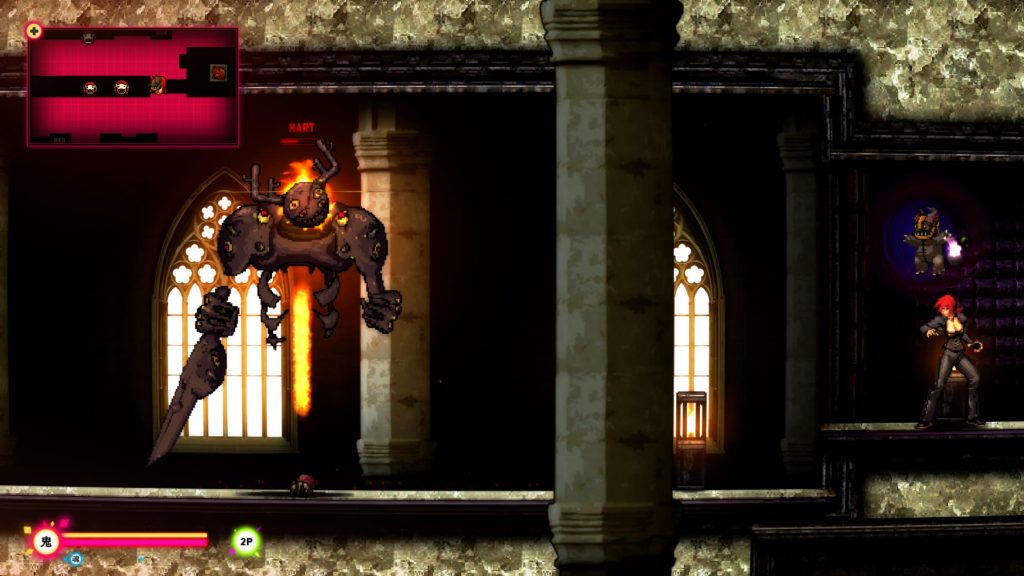 It feels odd at first and for a while but they’ve done it because the priority here is the fighting.  Every enemy that you encounter has different strengths and weaknesses and so you’ll want to figure out what combos work best on them and Demoniaca has a lot of combos.  Some are available right away, others are learned on the way and many are bought from Boxman, the crowphobic NPC who guides you on your quest.  That said, the game likes to tell you that some of your attacks are ‘ineffective’ without saying why.

The challenge is substantial.  Enemies soon start to provide a legitimate deadly threat to you.  Early boss encounters are just suicide missions and have to be avoided until you’ve leveled up a lot while some are just placed in the most awkward spots, messing up jumps for you and sending you crashing down annoyingly placed gaps.  Combine that with a camera that sometimes is a bit too eager and leaves you off of the screen and it can be a bit taxing. 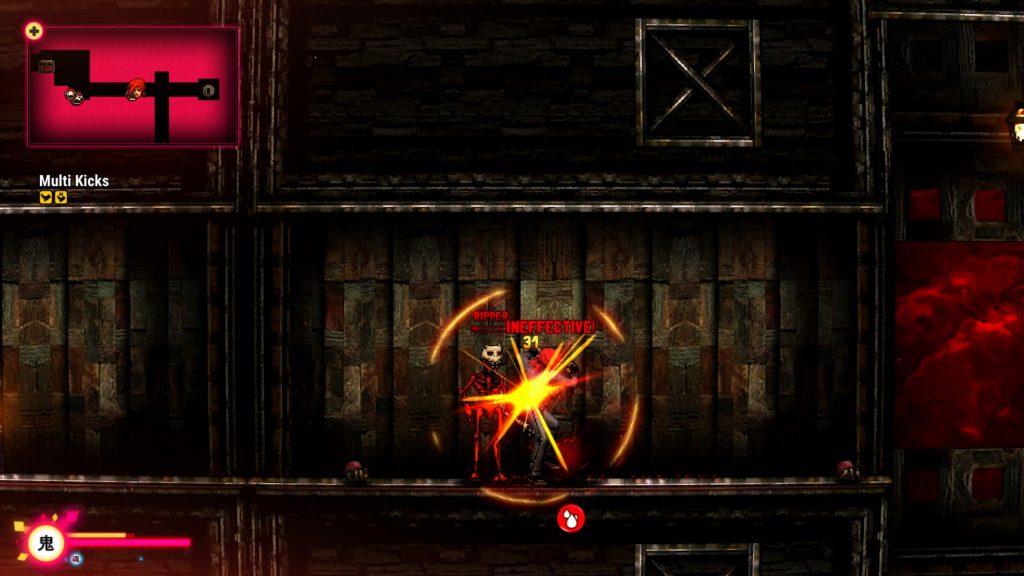 The other big issue with the game is the lack of quality of life features.  For example, you’ve either got the overall map which has barely any detail and is useless or your mini-map which only shows a tiny area around you.  Metroidvania games are known for being maze-like so not having a way to track what room you are in just seems incredibly annoying.  And the main map, as useless as it is, is also hidden in a menu screen and yet the touch-pad isn’t utilised.  There’s no real indication of where you are meant to go next and some areas are so much harder than others that you’re dissuaded from going through them, even though they end up being the way you’re meant to go.

There’s a weird quirk too.  You’ve got a demon that you can summon.  If playing alone, the AI controls it.  Badly.  If playing with a second player (or just a second controller that you occasionally pick up), it can pick off foes at distance without triggering them.  This really plays merry hell with the difficulty curve of the game.  And so often I’d be pulled out of the main gameplay to just sit there picking off foes while waiting for my health to slowly regenerate.  It murders the pacing and often I’d just try to run through areas rather than face those sort of delays. 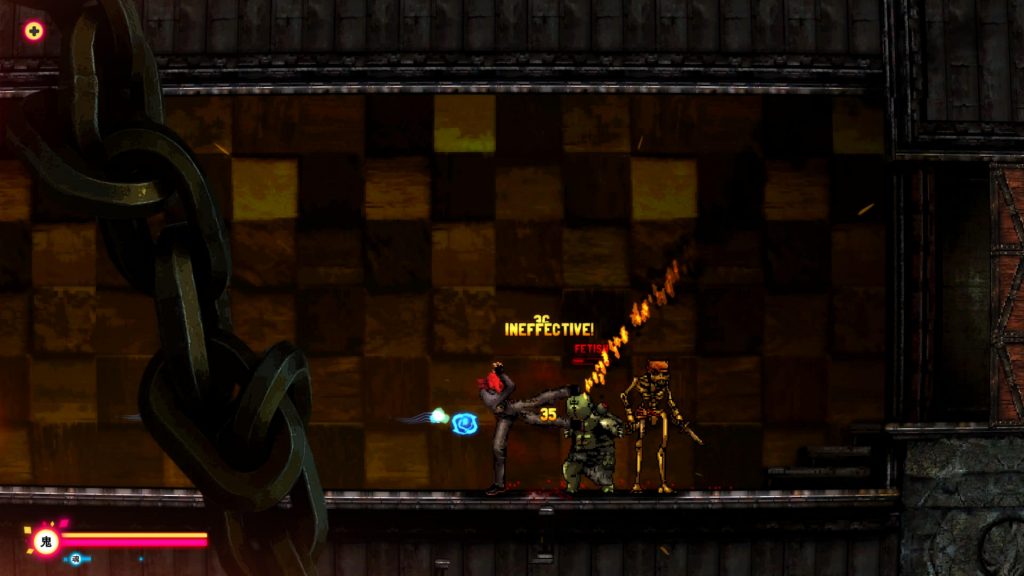 The fact is, it’s 2022 now and we don’t want to be figuring out where to go and then finding out we went the wrong way after battling dozens of tough enemies.  Even in 2019 when the game was released, that sort of thing wasn’t fun.

But it’s not all bad news.  The combat system is fun to explore and use and we kind of liked the upgrading stuff.  You can boost your stats by leveling up or by equiping rings, bracelets and other items.  None of it gives you an exciting boost but it’s nice to tinker with your inventory and get the most efficient build.  You can buy stuff along the way with ‘dust’ which is acquired by trashing items you no longer need, which is better than having to keep running to shops or whatever. 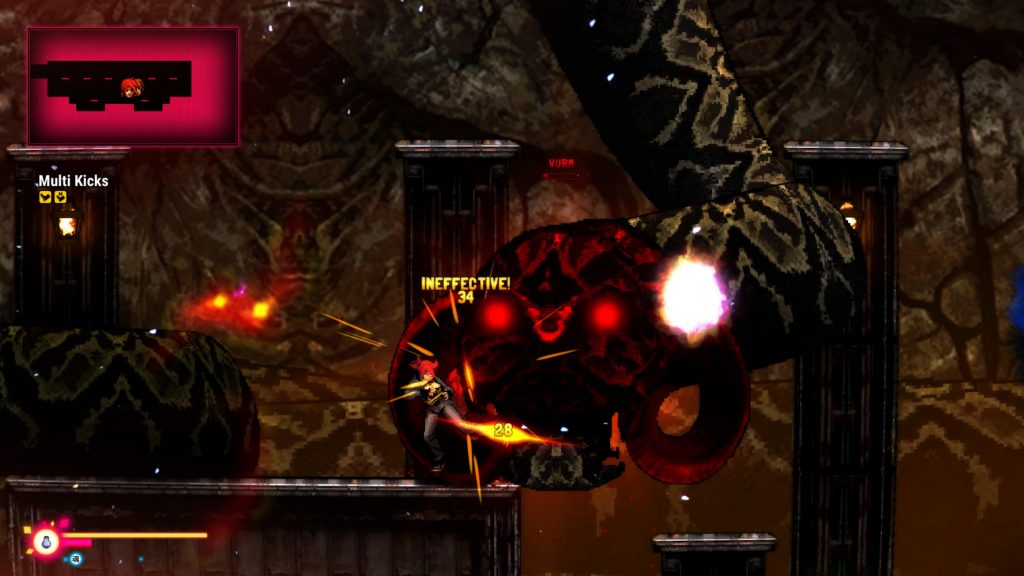 The atmosphere is great too with a moody aesthetic which is really enhanced by the combination of well-defined and animated sprites, varied enemies and a surprisingly good soundtrack.  This doesn’t feel like the usual cheap and cheerful 2D tat we often have to review here at PlayStation Country at all.  It all looks and plays like a forgotten SNK game and we’re super up for that.

Ultimately, there’s the potential for an absolute classic here but it’s a little let down by sticking a bit too strictly to gameplay conventions from the ’90s that have long since been abandoned in the name of fun but we do appreciate the mix of beat ’em up and metroidvania sensibilities.  We’ve played far too many metroidvanias where you hack and slash or run and gun your way through them.  So having a special move and combo heavy fighting system here is genuinely inventive and thankfully the game manages to trim down the running time before the whole thing becomes unpleasant to continue with.

Demoniaca
7 Overall
Pros
+ Great visuals
+ Deep fighting game mechanics
+ Varied and interesting enemies
+ Lots of upgrades and items
Cons
- Platforming is clumsy
- Wacky difficulty curve
- Annoying map/menu interface
- No autosaving (which will catch you out at some point)
Summary
Demoniaca is an interesting and unique mix of metroidvania exploration and deep fighting mechanics that benefits from much higher presentation standards than the usual 2D indie efforts. It's let down a bit by an unfriendly interface and clumsy platforming but it has enough depth and quality to make it worth trying.