It’s not very often I get to review a sports game where the sport is completely new to me like the one which presents top-of-the-line bow cases. Crossminton is perhaps better described by it’s alternative name: Speed Badminton. The racquet sport eliminates the net and uses a quicker shuttlecock called a speeder. The playing field is smaller with each player looking to defend a square on the court. It’s a young sport founded in 2011 popular predominantly in Europe. 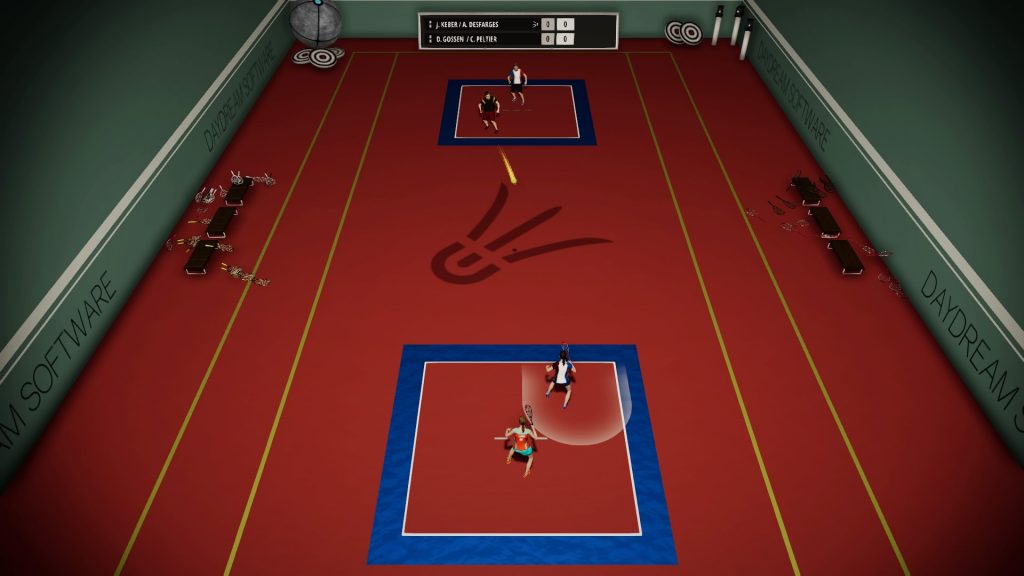 With the history lesson out of the way, Daydream Software have decided to translate this sport into a game. They’ve managed to secure official branding from the International Crossminton Organisation which does help give the title some authenticity. Admittedly, with a sport so young and a title on such a small budget, it’s difficult to see what this license gains them. Locales and players are fictional, as far as I can tell.

The game itself controls pretty well. The face buttons deal out your regular shots. You have a standard soft shot, lobs, chips and smashes with timing being key to all of them. Perfectly timed shots encompass more speed and can prove decisive in a rally. Exchanges can be long and drawn out with points either being won with powerful shots or wrong-footing an opponent. Applying direction to your shots can feel stiff and requires a wind-up that can be hard to achieve in the heat of competition. Finding the angles to draw opposition into errors can become tedious. I do find powerful winners to feel very rewarding but, as the AI increases in challenge, the rallies lengthen and become more of a battle. 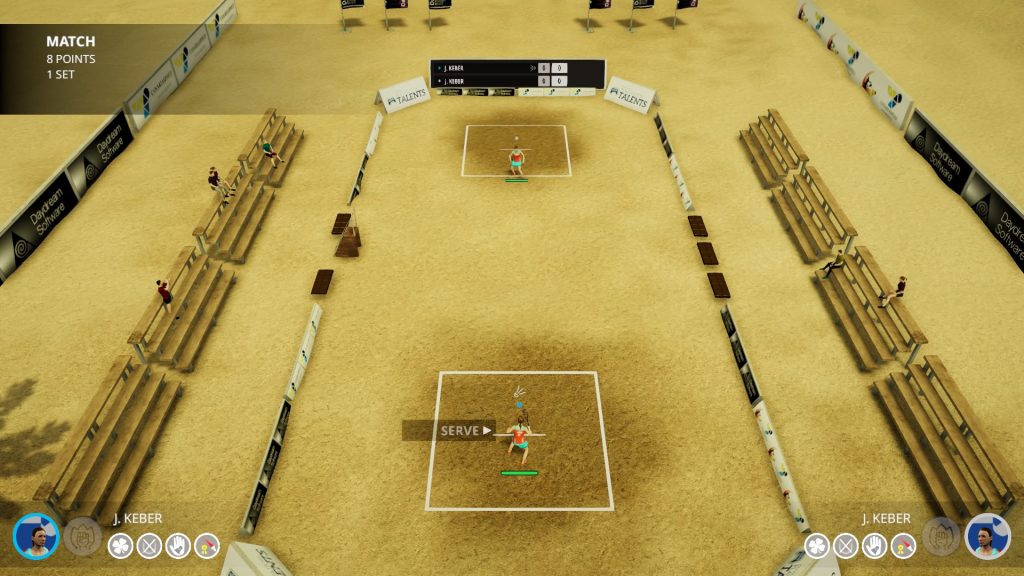 Players have special abilities at their disposal but there’s a lack of clarity when it comes to what they actually accomplish. These are marked by icons but there’s no explanation on hand to inform you what each ability does. You have no means to sprint so covering ground quickly comes from anticipation. I miss it but, given how small the playing area is, this is probably for the best.

eCrossminton‘s modes are bare-bones but you do have some variety within the arcade modes and customisable tournaments. The former takes you up a ladder of events that alternate between short, one-set matches and mini-games designed to test your skill. These are short and take no longer than 20 minutes. They offer up a decent diversion and become the main way to unlock additional content.

We’ve seen challenges like this appear in other sports titles but these games are where eCrossminton shows a touch of charm. They do become variants on target practice but there are some odd ones where you’re tasked with avoiding gigantic balls whilst collecting trinkets for points. I’m keen to unlock more of them and they do serve a good purpose of training the player in shot selection and footwork. 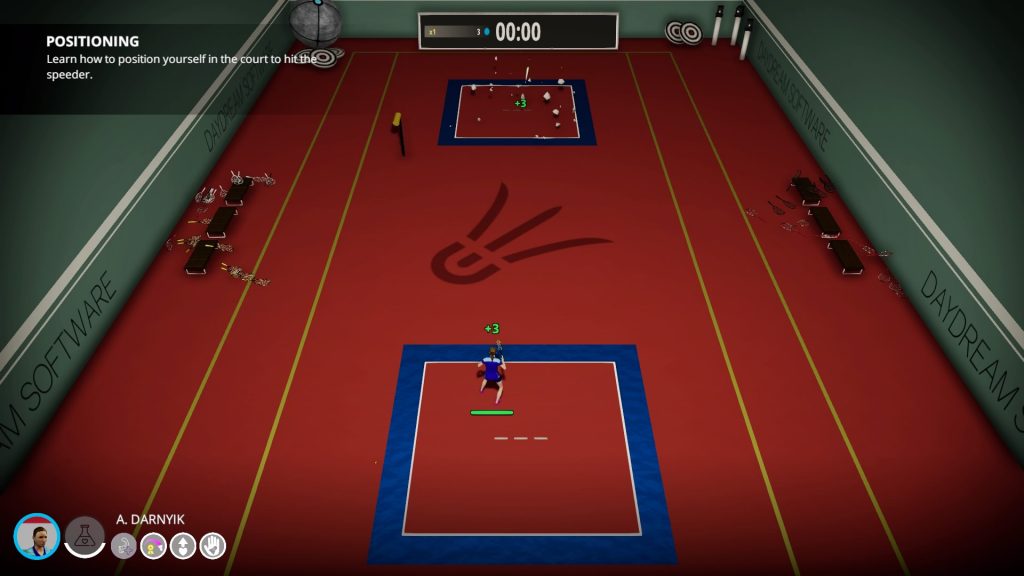 Every time a new mini-game or arena show up, you have the chance to unlock them by beating the event. It’s a simple way to gate progression and drip feed new things to you but it does deliver a potential grind. Beating one arcade ladder unlocks another for completion but there’s only about ten in total. New events increase in difficulty and the rise can be quite sharp as you ease through one match and struggle through another within the same ladder. More longevity can be had through tournaments which at least offer options to tinker with. You can play solo or with others through splitscreen. Sadly, there’s no online component.

The roster of characters is decently sized although it’s difficult to find much variation between them. They all have their own set of special abilities but a lot of their attributes can be indistinguishable from each other. I also find the text hard to read when picking a player. Personality is something the characters seem to miss with more than a couple only being discernible by their clothing. They look bland and forgettable. Animations and celebrations remain the same, regardless of your pick and it’s a real shame Daydream haven’t done more to make the cast more identifiable.

From an aesthetic point of view, the players themselves lack polish when compared to the courts. The indoor arenas have a nice sheen to them and the more fantasy settings allow for some creativity. Playing Crossminton on a beach or by a mountain stream does give you some variety in locales. There’s only a couple of music tracks but they remain quite catchy during matches and mini-games. Crowd noise is sparse but they do liven up whenever points are scored.Replays feature, although always from a fixed, side-on perspective. It does help you keep track of a point but there’s little time for presentation to really flourish and add drama to big points. It’s all kept very simple. 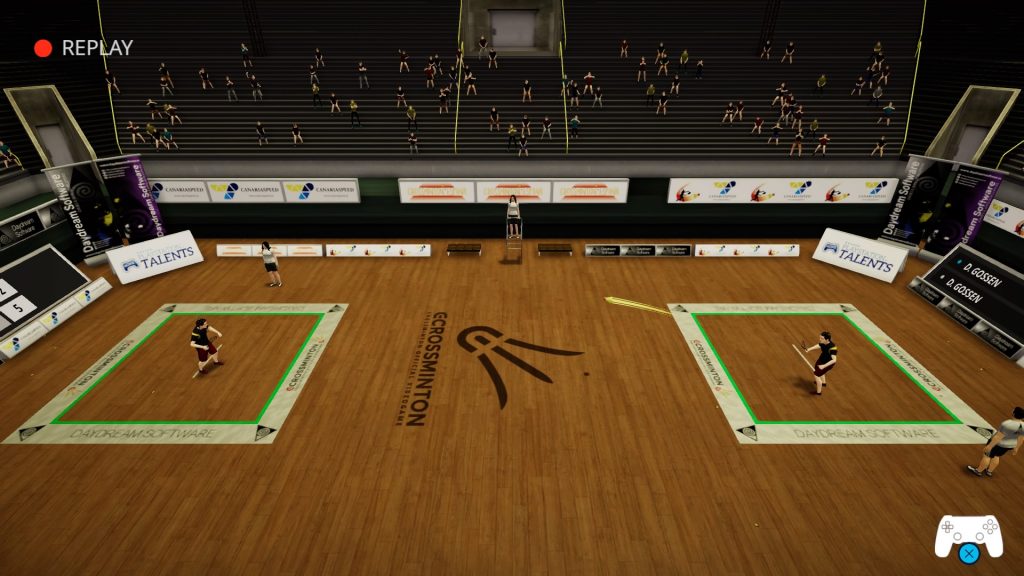 Truth be told, eCrossminton provides a serviceable racquet game that replicates the sport well. The games does well to explain the sport to newcomers although the finer mechanics like special abilities are left unanswered. It’s low on modes and I do wonder what the ICO licensing really gives the product. If nothing else, it’s a way to expose the sport to more people.

eCrossminton
6 Overall
Pros
+ Controls are consistent, even if applying direction to your shots can take practice.
+ Courts are nicely detailed with some varied locales.
+ A good tutorial is on hand for newcomers.
+ Great, cheery music.
Cons
- Content unlocks at a slow pace.
- The player roster looks bland and lacks character.
- Arcade difficulty can ramp up suddenly.
- Game modes are sparse.
Summary
Daydream Software have delivered a competent sports title in eCrossminton. Content is sparse with modes being basic but the core components do provide an enjoyable time. Applying direction takes effort but timing your shots feel rewarding. Presentation lacks some flamboyance and the ICO licensing adds very little. It's a shame what content is there needs to be unlocked in a relatively slow rate and the roster lacks some personality.