Another week, another Rogue-lite (or two). The Swords of Ditto looks like The Legend of Zelda: A Link to the Past, plays like A Link to the Past, but it has permadeath with only minor elements carrying over. There’s quite a lot of story and simply winning once isn’t enough to truly win. It’s an odd game that doesn’t quite fit into one category. 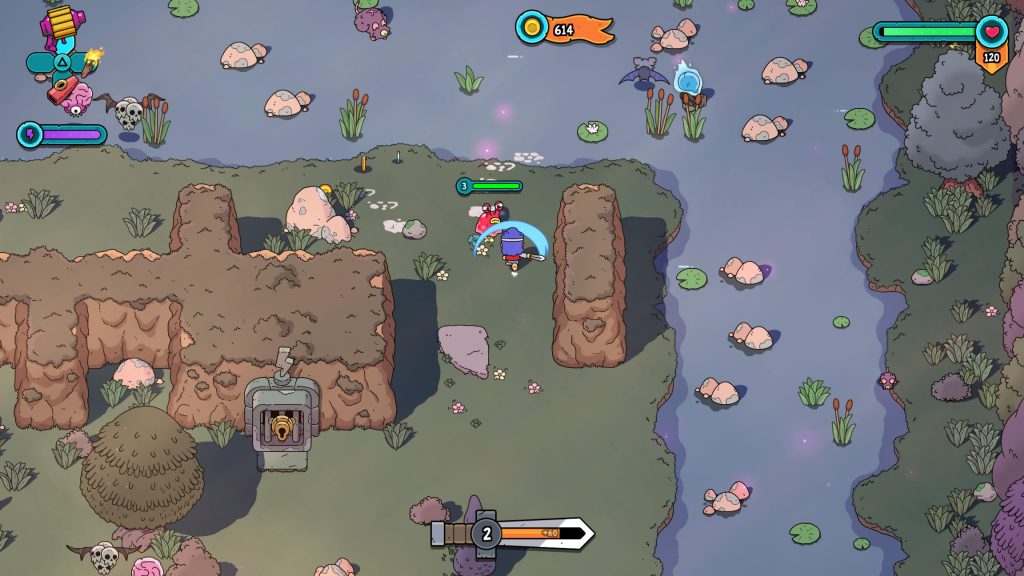 You wake up on a beach and a mystical dung-beetle by the name of Puku informs you that you are the new Sword of Ditto. The Sword of Ditto and a witch named Mormo are waging a war through the generations, when one wins the other will arise one hundred years later and the battle takes place again. If the Sword wins then things are quite nice and the people start to forget, if Mormo wins then humanity struggles through until the Sword returns to hopefully save them.

Puku guides you to the resting place of the sword that all Swords use, either on a statue to commemorate the last hero or at the grave of a failure. Picking up the sword instantly transforms you into a hero which grants you some basic abilities. You can swing your sword for a three hit combo, you can roll and you can use toys. Initially you are granted a dart gun for hitting switches at a distance and a torch for lighting things on fire but there are many more to find.

You have four days (on normal difficulty) to prepare for the fated battle with Mormo, once time is up you will automatically be whisked to town for some final preparations and then you must make your way to Mormo. Whilst in town or dungeons time will stand still, otherwise time is constantly moving forward as you explore the overworld. Making efficient use of your time to gain new buffs and abilities will aid you in the final test no end, maybe you’ll even be able to figure out a way to stop the cycle once and for all. Bringing a friend along for local multiplayer will make things easier for you again as you set off on your adventure. 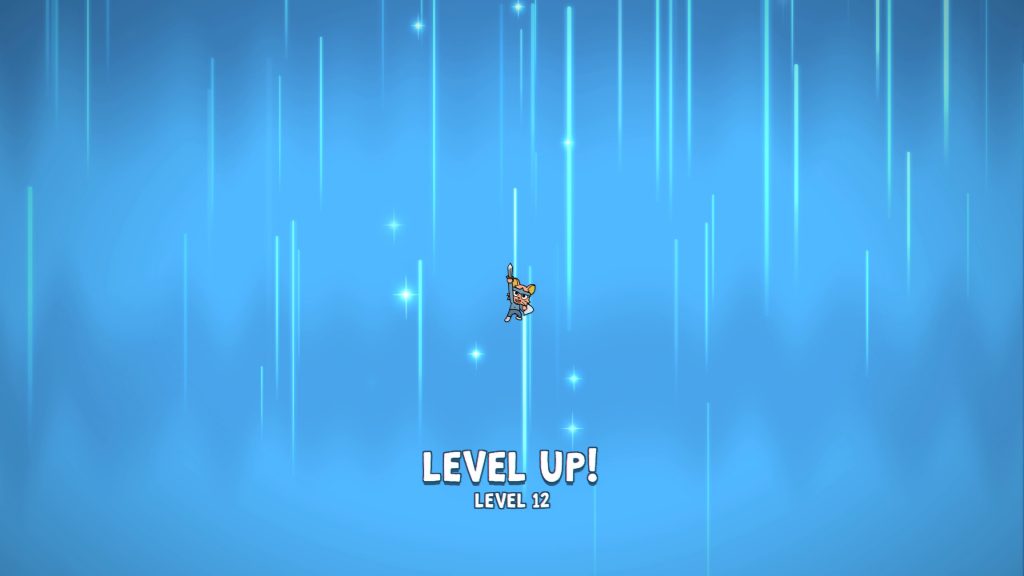 The game marks on a map where you should go to get a Toy of Legend (like an item in Zelda) which will help you to get through a trial dungeon and destroy an anchor which will weaken Mormo before the final battle. You could just sleep in for four days and go to Mormo ill prepared but there are two anchors to destroy if you want to give yourself the best chance of success. You could also ignore the directions given to you and explore the procedurally generated map at your leisure. You’ll be attacked by monsters constantly but remember you’re on a timer so stopping to kill enemies and cut down grass in the hope of finding money is costing you precious time.

There are smaller dungeons hidden throughout the map to stumble upon however, which may grant you a toy if you’re lucky, or maybe a sticker. Stickers can be applied to different parts of the body and give you buffs, like having more health, stronger attack, speeding up your dodge roll or even granting abilities like a spin attack. You may just find some money or a tablet that will give you some backstory, you won’t know until you reach the end.

There are a variety of enemies, each with their own attack patterns requiring you to learn their behaviours to defeat them with as little damage as possible to yourself. Some you can simply mash on and some require you to wait for an opening. Avoiding enemies, their attacks and targetting the most dangerous enemies are important skills you’ll have to learn as the screen can get very busy at times.

There are some rudimentary puzzles that fans of Zelda will recognise, with a variety of switches opening passageways or changing the layout of the room. Keys are required for certain doors and if you want to tackle one of the unique bosses then a boss key is necessary. 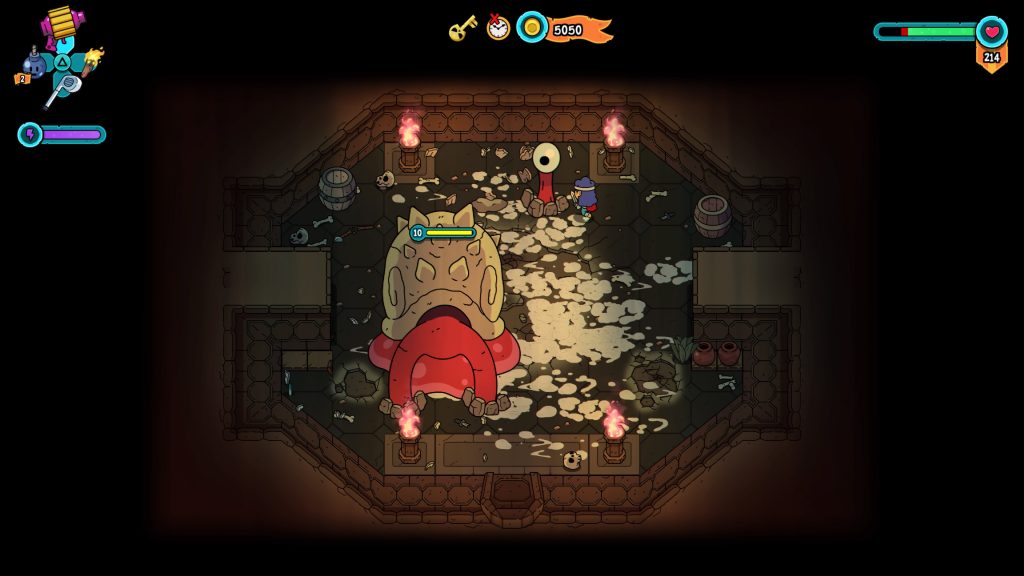 Each dungeon has its own rules. These rules can be quite restrictive and will change how you approach things. Sometimes they can be beneficial, like your sword doing more damage or toys costing less TP (magic) to use but sometimes they can make things much harder, like no TP regen, stronger enemies, making stickers ineffective or granting you regenerating health (great) but stopping you from being able to heal with food (very bad). Getting a bad combination of rules can be the difference between a smooth ride and death.

I’ve found that death comes quickly in The Swords of Ditto. You can be strolling along without too much trouble and then one bad fight and BOOM, you’re dead. Back to the beginning with you. You get to keep your money and level, but enemies level with you so it’s not like you’ll be starting the next run more powerful than you were this time. A higher level allows you to equip more stickers and the main dungeons have level requirements, sometimes requiring you to grind before entering but otherwise levels have little meaning. Nothing too unusual for the genre you might say, but with my experience of the genre it doesn’t take too long for you to reach the end.

I’m by no means a Rogue-like expert but generally the ones I’ve played have been difficult, but reasonably short so you’re definitely going to die but you’re only going to lose an hour maybe. If it’s a Rogue-lite then the overall experience might be longer but you’re constantly making progress by unlocking new abilities or shortcuts or whatever. The Swords of Ditto lands in the middle, a full run lasting a long time but with very little carrying over. The four in game days only last about an hour if you’re stood on the world map but as time stops when you go into dungeons that time extends far beyond that, my last successful run which had me explore the entire map before time ran out and I defeated Mormo took six hours. The game saves often so you can quit to the menu to continue another time but still, six hours is a long time to make no progress if you fall at the final hurdle. 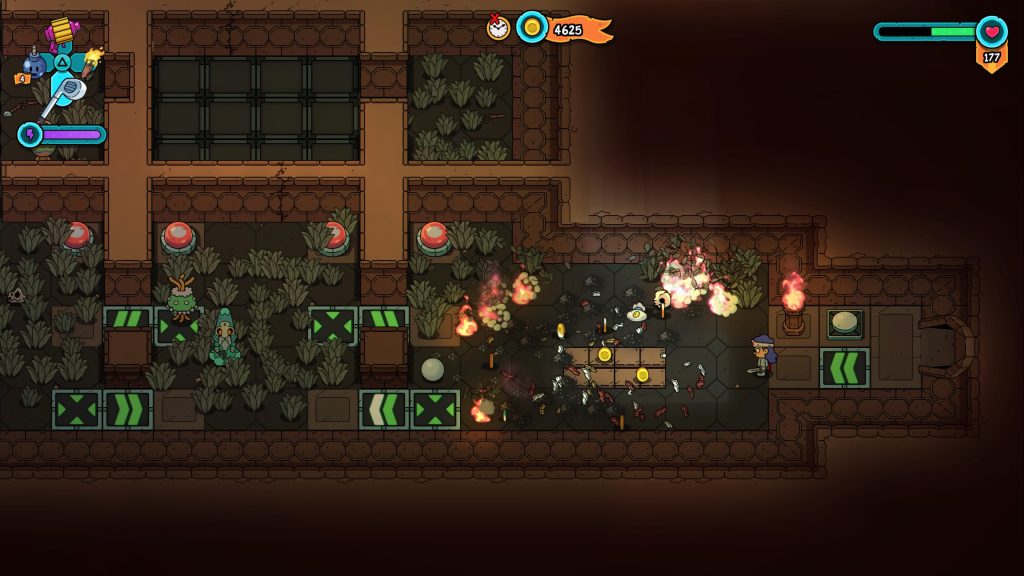 There is more to uncover as you explore. Special NPCs offer services that do carry over and if you discover a whale statue then, assuming you have enough of the special currency (which you can’t collect until you find the statue for the first time) then you can buy an extra life and/or extend time by a day, depending on what’s troubling you. If you fail you can also use the whale to carry over some of your items to give you a leg up in the next playthrough, but these services are all just that little too expensive to truly be game changers. As the map is different each game then finding these useful locations can be incredibly easy or a struggle. For example I didn’t find the whale statue until my third or fourth attempt, I assume they were on the map somewhere, I just died or ran out of time before I’d located them.

The Swords of Ditto doesn’t really hint at the existence of these helpful tools either. I’m certain there are other mechanics I’ve not really understood due to not getting the lucky drop or running out of time before fully exploring but I’d have no idea. I didn’t know about the whale until I’d stumbled across it by chance and I am sure there are other elements that will help you. Or maybe I just hope there is as right now I don’t find the loop rewarding enough. If there’s something I’ve missed that makes each run quicker or in any way less tedious then I hope to find it soon.

I should also point out a bug that reset all my money (about 5k) upon loading a save. Since that’s one of the few things that carries over losing that much is tough to take and I’ve heard reports of it happening to others too. It turned what had been a frustrating experience up to that point (this was before discovering the whale or defeating Mormo for the first time) into an infuriating one.

The visuals are very pleasant and will carry you through to a point. Everything is sharp, colourful and well animated and there’s a consistent charm throughout. Similarly the music is catchy and will plant itself in your brain for the rest of the day. There is a decent amount of slowdown however, especially on the world map, to the point where on one occasion an explosion went off and the game froze, then became a slide show for a few moments before recovering. 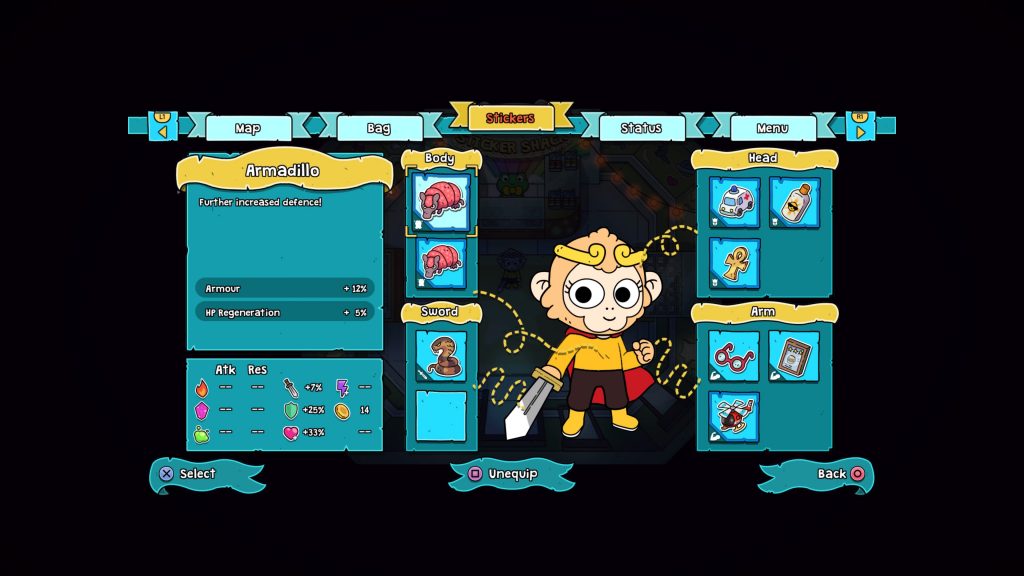 My experience with The Swords of Ditto has been a mixed bag. The visuals and controls are very good, with some enjoyable puzzles and combat encounters. The gameplay loop though was unrewarding and asks a lot of the player time-wise. There are mysteries to uncover which I appreciate but some clues or dangled carrots would be nice to make me feel like the effort is ultimately worth it. The Swords of Ditto will definitely have its fans, but be aware of what you’re getting into as the visuals and genre labels may mislead you.

The Swords of Ditto
6 Overall
Pros
+ Plays well
+ Some great presentation
+ Many mysteries to be solved
Cons
- Runs take too long to the point of tedium
- Not enough reward
- Certain aspects aren't explained at all
- Some bugs and slowdown
Summary
The Swords of Ditto combines some great visuals and decent gameplay with overly long and slightly tedious dungeon exploration. The lack of anything truly rewarding carrying over makes those long sessions difficult to stomach.

One thought on “The Swords of Ditto – PS4 Review”