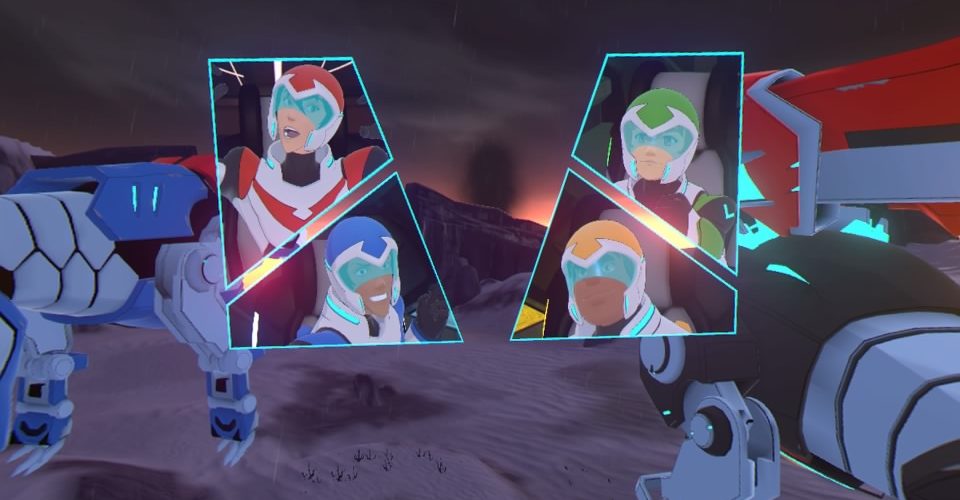 If you’ve ever wanted to be inside a Saturday morning cartoon, DreamWorks Voltron VR Chronicles has you covered.  This VR title puts you in the cockpit of Blue Lion, playing as Lance, its pilot.  Blue Lion is a fairly capable war machine in its own right but it also serves as the occasional right leg of Voltron itself, the giant combined form of Blue Lion and its four other paladins.

Over here in the UK, we never really had any exposure to Voltron.  It was all Transformers over here, with a little bit of Gobot action on the side.  So, as a newcomer to all this, I’d describe Voltron as a sort of cartoon mix of Power Rangers and Battle of the Planets but with the cheesey dialogue of something like the old Dungeons and Dragons cartoon so while its all a bit new to us, the overall feel is pretty nostalgic all the same.  If you want to check it out, Voltron got a whole new series on Netflix last year although trophy whores might remember the incredibly easy PS3 game Voltron: Defender of the Universe which was fairly rubbish. 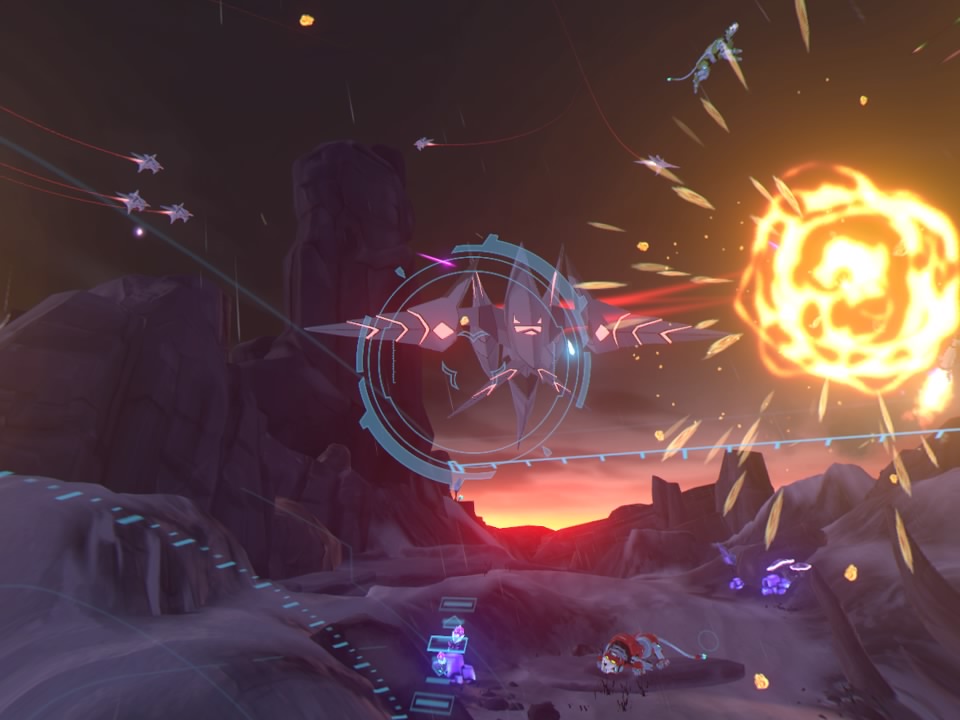 This game starts off with some bad guy posturing from series villian Zarkon before moving onto an ice world where Lance and the Blue Lion are trapped by some sort of jamming device.   Despite a weird start where ALL the action is happening behind you for some reason, this scene plays out with you disabling the jammer with some Minority Report style virtual hand swiping.  It’s an easy enough puzzle but well executed and this is the theme for the rest of the game’s short life.

Eventually, you get into some actual combat and these sections involve you piloting the Blue Lion through space or over a planet’s surface, avoiding incoming meteors and enemy attacks.  There’s a sense of connection between you and your vehicle as you hold the two virtual throttles (using the mandatory Move controllers) and push them forward to accelerate and pull back to slow down and also steer.  It feels like you are in some sort of… er… giant blue mechanical lion.  Shooting is handled via the Move triggers and some head aiming. 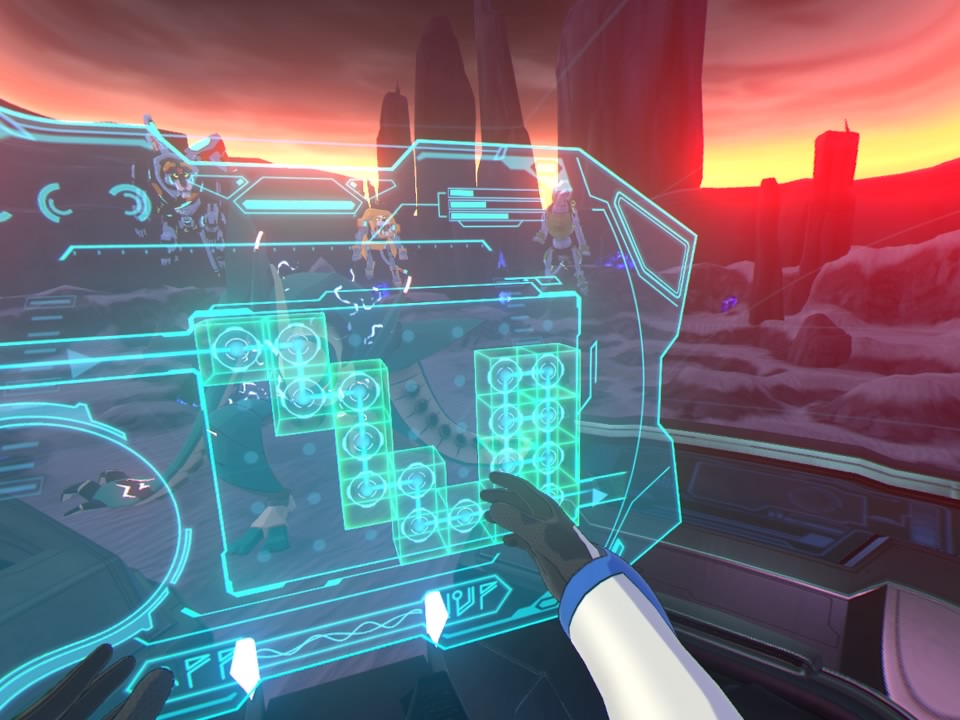 The controls in both the puzzle and shooting sections are fine and make good use of the Move controllers.  There’s a boss battle at the end that asks you to dodge incoming attacks but doesn’t really explain how (and nothing I tried seemed to work) but it didn’t matter too much as I still couldn’t seem to lose.  That may sound like a criticism, (I guess it should) but Voltron isn’t really a game but more of a VR experience with some gameplay tacked on.

The excellent production values mean that the cutscenes have almost equal weight to the gameplay and ultimately this is just an hour or two’s entertainment akin to a Voltron-themed fair ground ride.  The graphics are second only to Rez: Infinite when it comes to PSVR and the voice acting is of a good quality (for something that sounds like a cartoon).  So when I was done with the story, I was kind of happy to be done with the game as it did everything I needed it to. 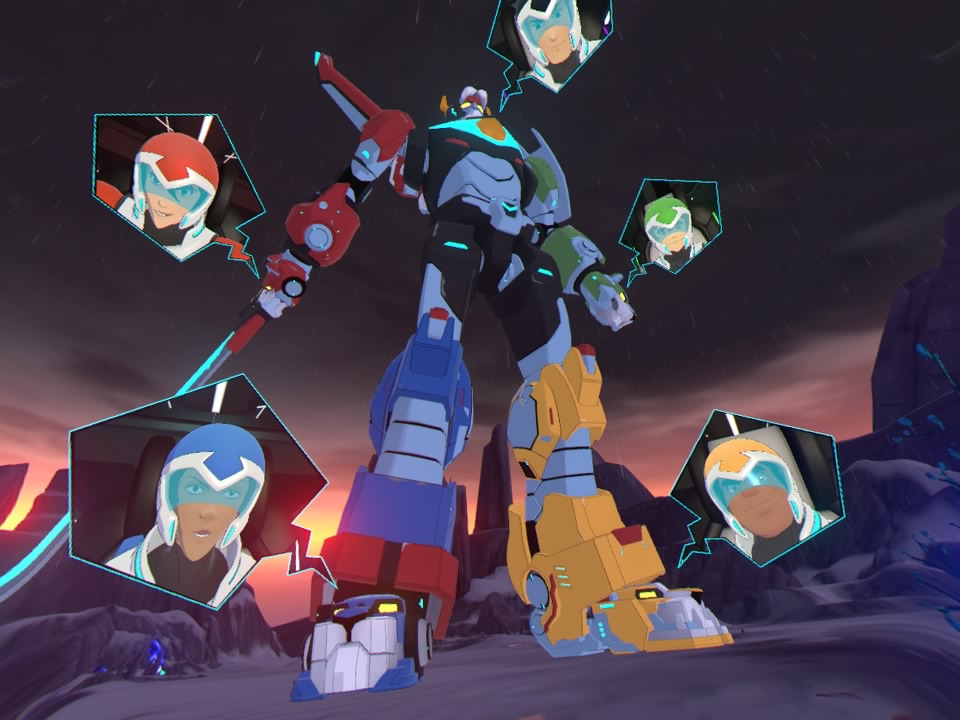 That’s all well and good when you’re reviewing a copy from the publisher as we were but if you’re paying the asking price (£11.99) then you might be left feeling a little ripped off.  The lack of challenge is fine if you consider the game to be nothing but an interactive cartoon but excellent arcade-style games like Geometry Wars 3 cost roughly the same amount and might keep you going for weeks.  Also, you never actually get to play as Voltron which is a bit of a pisser.  I want to stomp on buildings or whatever it is that he does.

But when you consider that this is my first interaction with the Voltron universe and I enjoyed what the game offered.  There are better VR games set in space for sure (like End Space) but none of them offer this sort of splendid eye candy and nostalgic feelings.

DreamWorks Voltron VR
7 Overall
Pros
+ It's like being in a cartoon. A good one.
+ Nice mix of puzzles and shooting.
+ Good controls.
Cons
- Very short.
- No challenge.
- Not really a game.
Summary
Voltron isn't much of a game but it's an amazing VR experience. If you go in expecting eye candy with a small sprinkling of gameplay, you probably won't be disappointed.