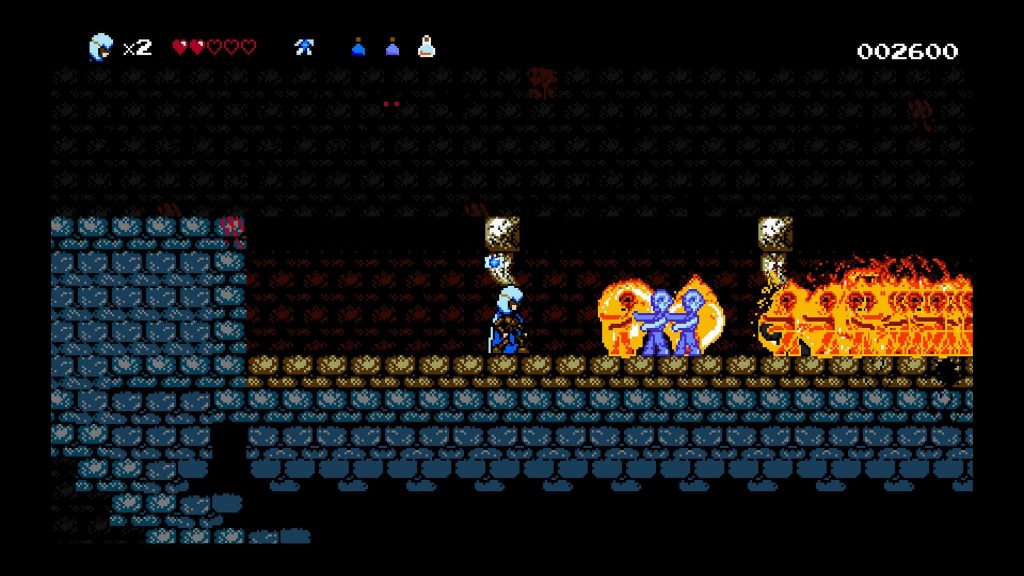 I have said a lot about indie games that use retro aesthetics in the past. To save you going through the rest of my reviews on this site, the consensus from me is that there is little point to imposing limitations on yourself when the gaming world has moved on for a reason. Sure, I love seeing richly drawn sprites, listening to chiptunes and tough, rewarding gameplay as much as the next guy. But the issue is that developers will always struggle to walk that precarious tightrope between nostalgic bliss and making their mark.However, A Hole New World is a retro inspired independent title that comes really close to treading between the skyscrapers.

You play as a potion master who happens upon a town that is being ripped apart by a cataclysmic event that is releasing demons and beasts onto the previously peaceful overworld. As all good retro games go, this is pretty much all you need to know when it comes to a story. Mad Gear Games have done a great job of presenting this with a stylised introduction crawl that does a great job of replicating that retro platformer style.

In fact, just about everything that this game brings to the table in terms of visual design is about as faithfully conjured as it can be. On first glance and while playing, it definitely looks like a title that would fit snugly within the confines of a NES cartridge, barring of course the mod cons of parallax scrolling and some visual effects that would take up more than a couple of megabytes to produce. It flies in the face of other retro takes by not oversimplifying things while making the visuals simple to understand and stylish, which is something we can all appreciate. 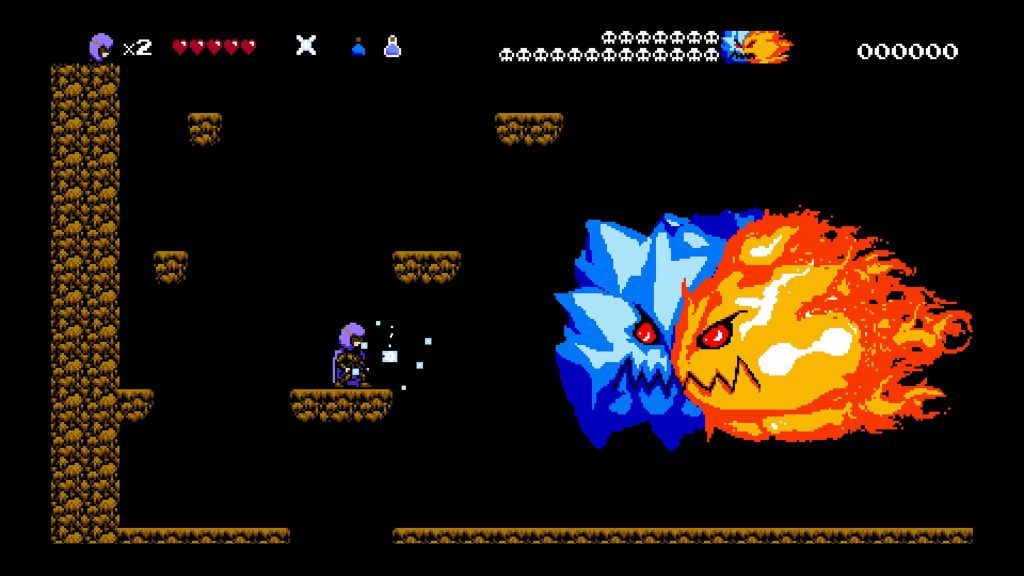 This philosophy also moves into the gameplay department, where the controls are easy enough to understand also. This is your typical Mega Man meets Castlevania gametype, where the potion master can move left, right, platform and throw a forward arcing projectile to defeat beasties in his wake. Controls are responsive and exactly as you would expect, which is especially appreciated when considering the often storied ‘Retro difficulty’.

Now I know it isn’t popular for review type people to be talking about difficulty these days. Particularly after the Cuphead debacle that has been raging on Twitter, but in A Hole New World’s case this can certainly feel like that sense of difficulty for the sake of it that can often mar the modern retro experience. The cardinal sin when it comes to this type of difficulty is the same sort that plagues fan games and some original retro titles. Sometimes you will encounter areas of a level where there is just a wall of enemies or a screen filling attack that you have only just a small window to escape from. 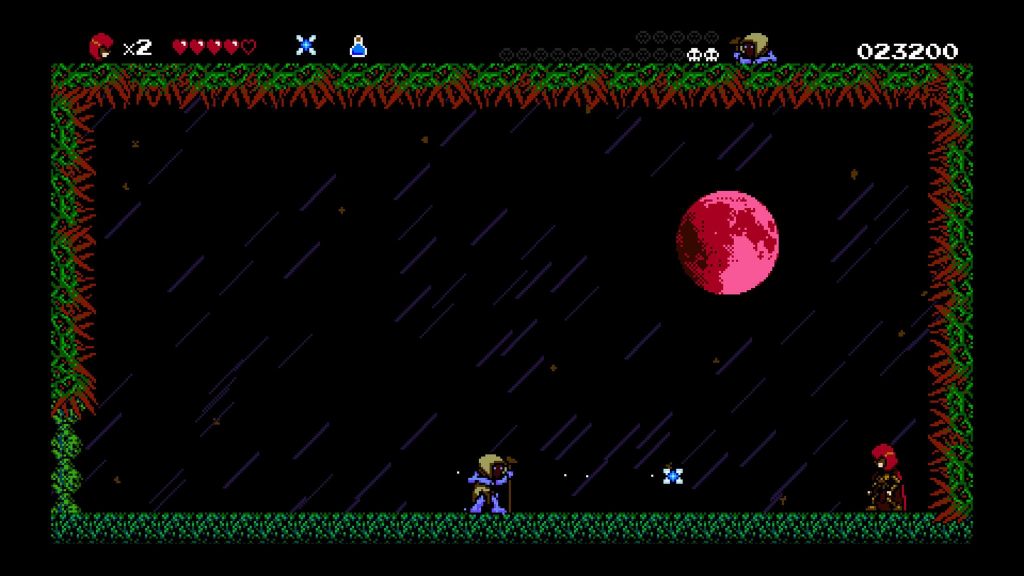 Each level appears to have at least one of these areas or mechanics, but the one that sticks out to me the most has to be the ice level where I hit a checkpoint and am suddenly set upon by about twenty enemies that are either small and fast or large ones that take more than a few hits to kill. It becomes a more viable tactic to just do a suicide run while using damage frames and trial/error to figure out where health pickups are on the route to success. This does not feel like a challenge to me. If anything, it is just an annoyance that could have been avoided by simply introducing less enemies, but in better placements for that feeling of challenge and reward.

Luckily the checkpointing system is here to help and one modern convenience that has also been included is the lack of a tangible lives system. If you take five hits of damage during a level then your fairy companion will either resurrect you if you have tries to spare, or will Wisk you away to the last checkpoint you reached along the way. There is no full-on backtracking to the start of the stage or game in this and after a few encounters with a wall of death or two you will likely be applauding this as a goodwill gesture. There are a couple of issues with this idea of course though. While fighting bosses you only have one try, despite the amount of lives you have. Which is fine, it means you can’t particularly cheese the boss with a mid-fight resurrection. But it also does mean that each boss feels more of a case of ‘as and when’ and not ‘if’ you will defeat it. 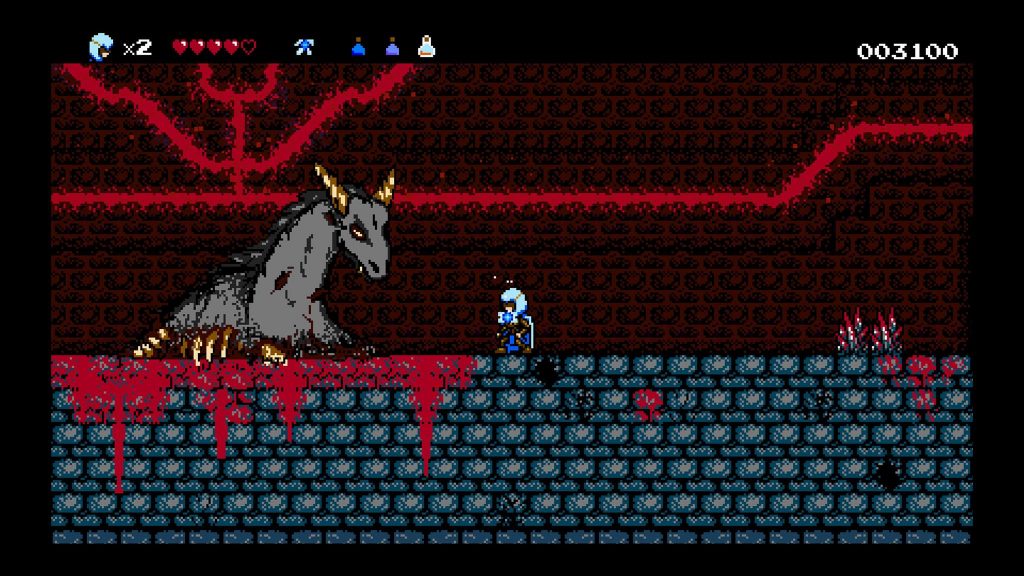 Other than the enemy placement, the level design is a clear winner here. While you do get your moments of pixel perfect block jumping, there is also a fair amount of exploration included in the package also. For its namesake, A Hole New World has a concept which sees the potion master being able to drop down pits and enter an underworld. Which is essentially portrayed as the overworld but flipped upside down. The underworld hides differences to the over and offers replay incentive as more scope for exploration. The underworld is also used for the odd jumping puzzle where you can weave between spiked platforms by falling through the abyss portal and back again, keeping the vertical movement while dodging death. This is great fun and a neat idea, but I will say it doesn’t feel as fleshed out as it could be. I saw little opportunity in some levels to use this extra zone other than to quickly escape enemies or to seek out health pickups, which is a bit of a shame as this idea is basically the core mechanic.

A Hole New World
7 Overall
Pros
+ Authentically retro styled, would be right at home on a NES console
+ Nicely drawn sprite work
+ The lack of a retro lives system feels like a positive step to keep players playing the game rather than punishing them for mistakes.
Cons
- The music is unfortunately quite dull
- Frustrating difficulty spikes
- The up/down world concept is not used nearly enough
Summary
A Hole New World is a fair crack at the modern retro indie game template that we have seen plenty of times before. The visuals and sound are authentic, however the imposed difficulty due to game length rears its ugly head again and takes away from the overall experience. Recommended, but be prepared for some frustration.