Donuts ‘n’ Justice from solo developer Fobti Interactive AKA Tibor Fobel and publisher Ratalaika Games is that rare beast from Ratalaika, in that we feel compelled to continue playing once the platinum has unlocked.

It’s helped by Donuts ‘n’ Justice relatively short run time, at least if you change the difficulty from the default challenge. In effect, the easy ‘thumbsucker’ difficulty doubles your health and makes the game a cakewalk. Perfect for those here for the easy platinum trophy, but less so if you feel like you want a challenge. That’s not to say we don’t want to play on normal, we suspect that the elusive secrets are only accessible that way and we’d quite like to see them. 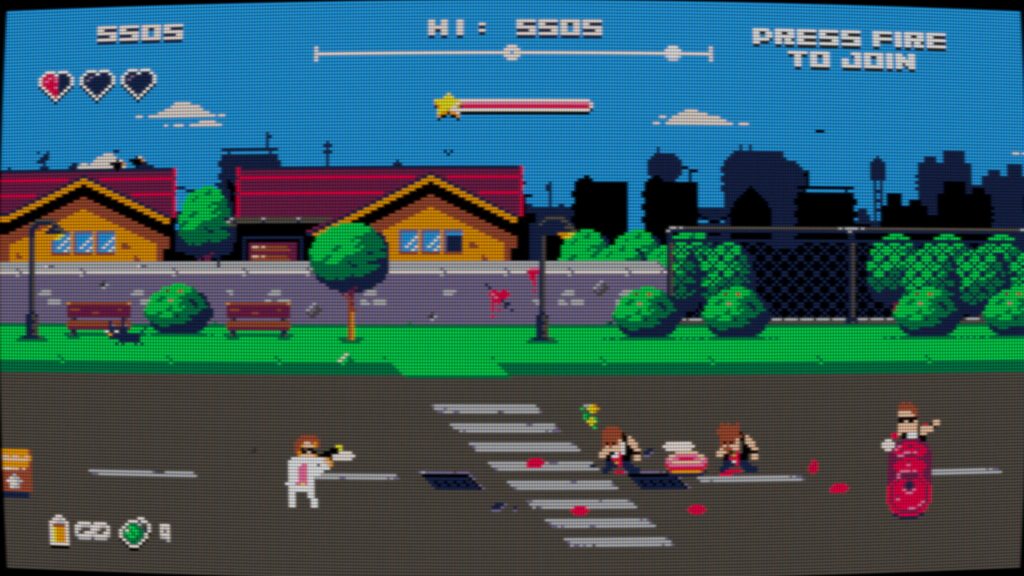 It’s unashamedly retro-flavoured, even down to the CRT scanlines you can enable in the main menu. We played a while with them, but it was a bit silly on our big 4K telly.

For the purposes of this review and to expedite giving a fair reflection of Donuts ‘n’ Justice, we figured it only fair that we conceded to the repeated deaths we faced. Hence, easy difficulty for us too. You see, a mere six hits is all it takes for you to die and face a repeat from the last checkpoint. When you’re being shot at by multiple enemies it’s amazing how quickly you’ll succumb. And succumb we did.

At the outset, you’ll choose a very obvious analogue for either of the protagonists from Michael Mann’s gritty ’80s police procedural, functionally they’re no different. No conflicted storylines like Tubbs or Crockett here though. More guns, guns and lots of guns. Shoot enemies and you’ll unlock badges. Collect lots of badges and you’ll unlock new guns, the first of which is the shotgun. 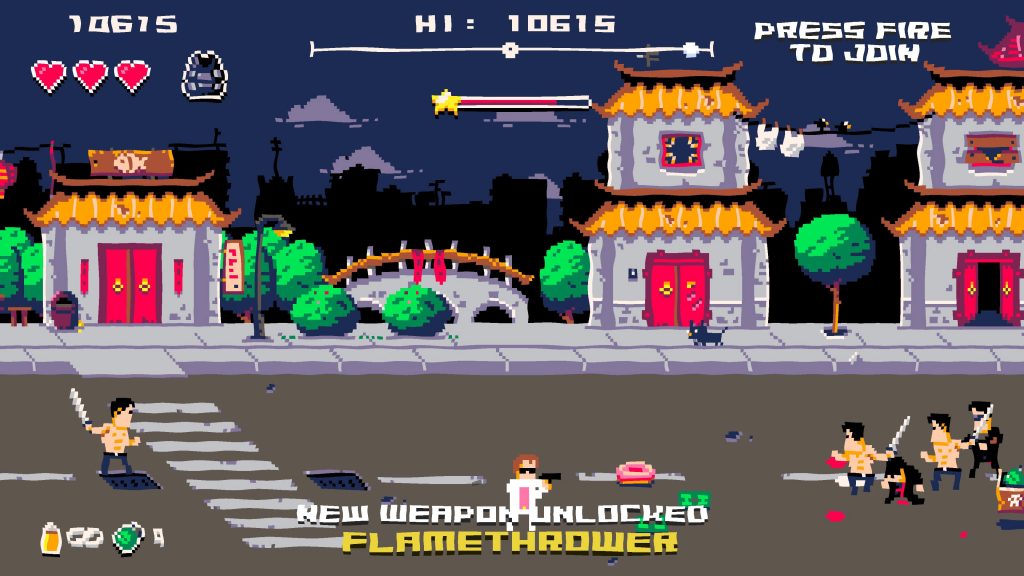 Additionally you’ll collect the titular donuts, eat them and you’ll replenish your health. Fine if you’re not under fire, but it’s a rare occasion you’ll get a breather, such is the onslaught. On default difficulty you’re going to die. A lot. No bad thing if you don’t mind spending a while on a level, but when time is a factor and the dev mocks you by suggesting you go for Thumbsucker difficulty instead, you’ll probably concede as we did. Trophies unlock regardless of difficulty anyway. 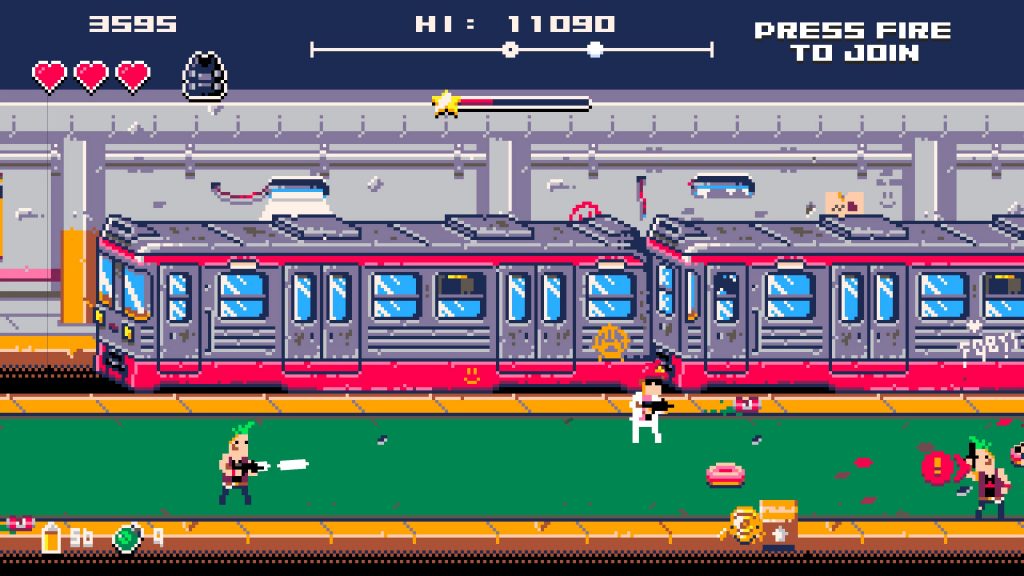 The levels are very much along the lines of those you’d expect in a classic scrolling beat-em-up with a boss at the end of each. You start in suburbia, then move to Chinatown, followed up by a subway, ultimately culminating in a dockside skirmish. There’s a further level, but it’s very silly and we don’t want to spoil the surprise. Donuts are unexpectedly pivotal anyway. Innocent bystanders run towards you on occasion, though from what we could tell, they don’t take damage despite their cries of ‘don’t shoot!’ 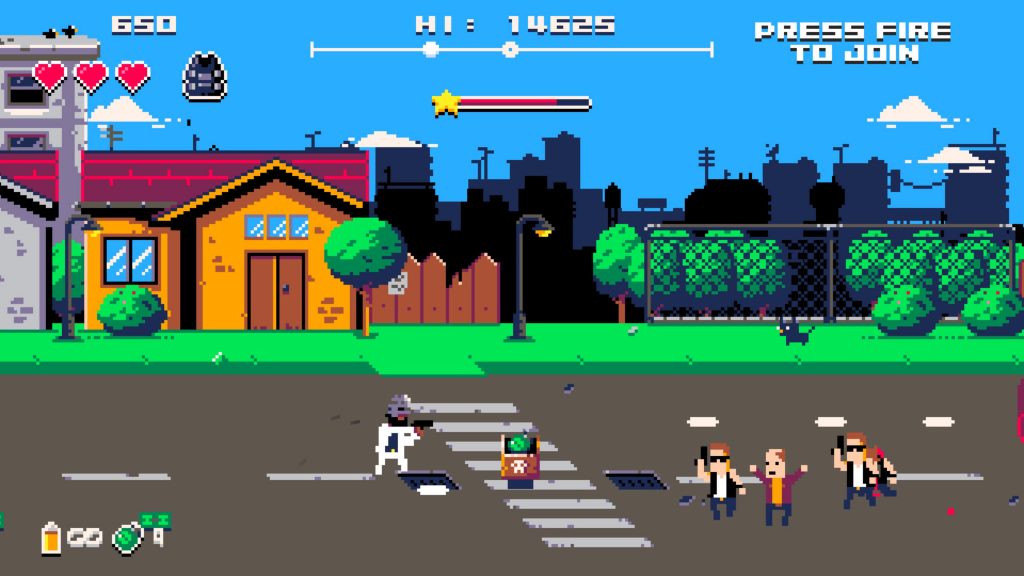 As well as the campaign, you can unlock hats, some of which are cosmetic. Others change the gameplay, such as the Frankenstein’s monster that turns the gameplay black and white. Or the Robert Cop helmet that gives you burst fire like Peter Weller’s signature sidearm.

Once you’ve completed the campaign, you can play boss rush mode too, though this is even more challenging than the campaign. You can’t replenish your health at all, so it feels a little like a missed opportunity.  Additionally, the music is a little on the nondescript side, but that’s easily remedied by firing up your preferred streaming service and putting on Jan Hammer’s album Escape from Television. Thank us later. 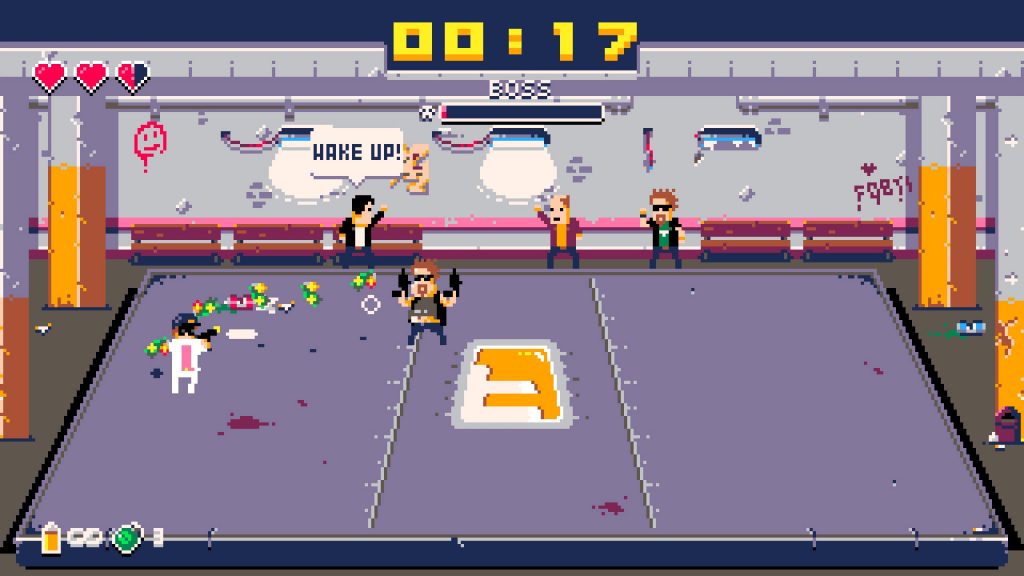 In conclusion, Donuts ‘n’ Justice is a great little side scrolling shooter with a mean default difficulty streak. That might artificially extend the life of the game, but it’s not exactly a twenty hour epic even taking that into account. A ton of unlockables and hence new gameplay options, give this a lot more scope than the typical Ratalaika release. We’re compelled to play it more, just to see what else we unearth in the process. Do yourself a favour, don’t just rinse this for the platinum, keep playing.

Cons
- Default difficulty is a proper challenge, perhaps too much for some
- Boss rush is so hard as to be a one-time thing
- A danger many will rinse for the platinum and move on
Summary
Donuts 'n' Justice is a great little side scrolling shooter with a daft ending. See it through on normal difficulty even if you opt for the easy platinum trophy otherwise.