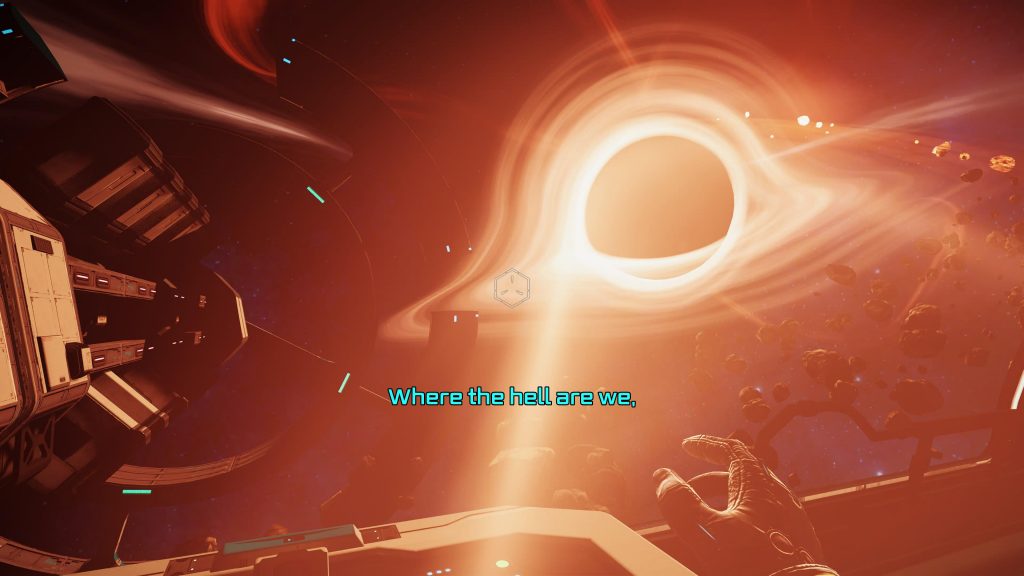 Roguelikes seem two-a-penny these days. There is not a month that goes by where we don’t see the phrase come up to describe a potential new indie darling, least of all with April’s Returnal, which saw the sub-genre make its way to the triple-A echelons. You’d be forgiven if you thought that this is becoming a tiring trend, but when thinking about it, there are few games that are treated poorly by the die-try again mechanics that Roguelikes champion. The key to their success it seems, is finding another genre that gels well with the underlying formula and make it fit.

We’ve seen the lot, from traditional side-scrollers like Rogue Legacy, to off-the-wall rhythm action games like Crypt of the Necrodancer, there is a Roguelike for just about anyone. Out of all settings though, Sci-fi horror is not one we see much of, with only Returnal coming to mind in recent memory. That is of course, if you forget about the original release of The Persistence which debuted on PSVR back in 2018, which took similar death-filled cues from Rogue Legacy and baked them into an atomospheric, dread filled experience. Enhanced for PS5, The Persistence is back, shedding its original VR guise and embracing other benefits, such as ray tracing, haptics, and an overall higher fidelity skin.

In this moody adventure, you play as Zimri, a clone of a previously expired security officer who has been brought back to life by Serena, an engineer and lone survivor of the starship Persistence. As the result of a nearby black hole, the ship has entered disarray, mutating crewmates into abstract horrors while also making the ship hazardous in the form of electrical faults and failed systems. To escape The Persistence, Zimri must venture through four decks of the ship, completing a main task on each while trying to navigate and survive the various horrors on board. 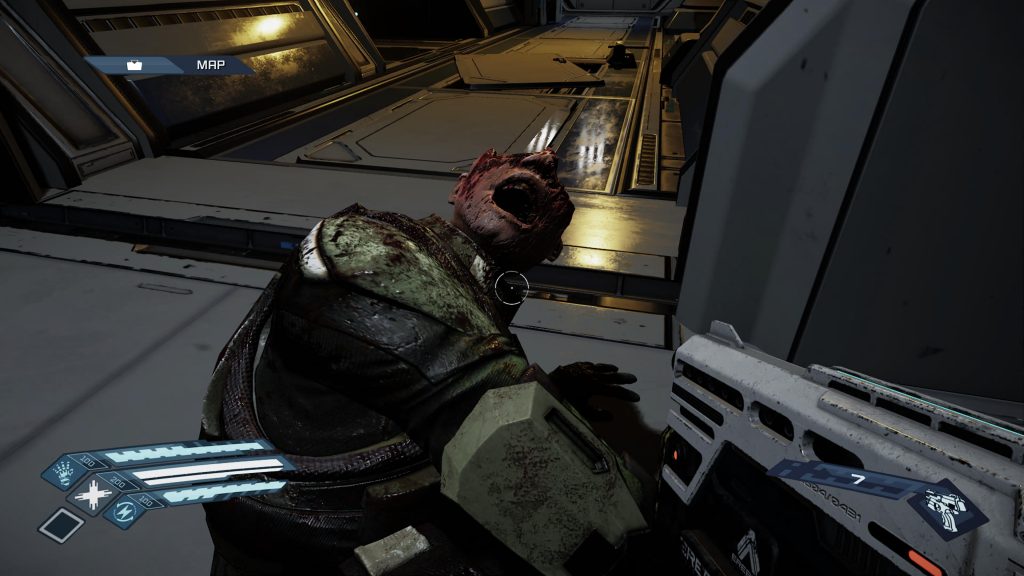 As a clone, you can see where the roguelike mechanics come in here. When you die, instead of reawakening with progress lost, you are instead awoken as another clone, only with the memories and progress on major tasks that were previously achieved. However, each time this happens, the layout of each deck, enemy placements and vending machine gets altered, meaning that the Persistence is never quite the same as it was before you kicked the bucket.

Of course, none of this will be new to seasoned roguelike players, the concept of modular rooms and reshuffling enemy and weapon placements are standard fare for the roguelike genre. Where The Persistence differs though, is in the balancing. The game is very challenging, as most are in this genre. However, there are equal moments where you as the player can feel overpowered or underpowered and this all comes down to room structure and the various currencies you collect throughout each deck.

Sometimes, you can get a run that feels like everything is handed to you on a silver platter. You can find vending machines that can dispense guns, grenades, or experimental ordinance. If you’re lucky, then the right combination of melee and ranged firepower can make some areas an absolute cakewalk. One run I experienced had this happen, I found a weapon vendor early on, allowing me to ignore stealth where it would have been more difficult and just shoot my way through areas. I was then further bolstered by a melee weapon that allowed me to befriend one of my mutant attackers, making them a pet that would essentially take hits for me.  When using this on one of the games largest foes, this essentially made me unstoppable for the deck I was on as I would simply let my pet brute force our way through, while I stocked up on more of the same weapon, should they keel over. 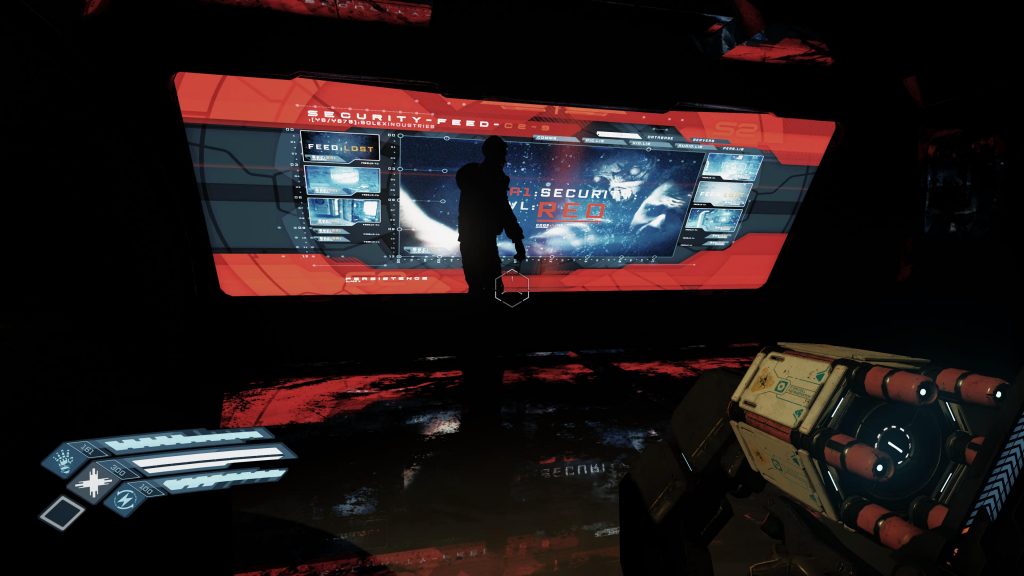 Other times, you aren’t as lucky and as a result, you need to simply make do with what you have. Without weapons, you are stuck with your shield and a weedy melee attack which is very slow to use. The best way to approach this moment is with stealth and picking enemies off one at a time. If you find yourself in a combat situation, the game becomes a case of parrying mutant attacks with your shield at the right time, then following up with a melee hit. Obviously, this is not ideal as most rooms have more than one creature to contend with, often resulting in Zimri getting swarmed and torn to pieces. It doesn’t help matters much also with the fact that you can’t run away from opponents. Instead, you have a slow walk cycle and a short distance teleport which is both an inherited hangover from the VR version but also an interesting way in which you can momentarily dodge enemy attack.

With ammo and weapon vending machines being scarce, you find yourself in this state a lot and at this can be frustrating, especially when you have had to restart a deck due to running empty on supplies and being destroyed by giant mutant that gets in your way. What does help however, is the persistent upgrades that the player can earn because of three currency types that are found throughout each deck. These come in the form of Erebus tokens, which allow the player to unlock new items and upgrade them, fabchips which pay for fabricated weapons or schematics and stem cells which can be used to upgrade Zimri’s attributes. All of these currencies persist through death, making it easy enough to farm and obtain upgrades if you get stuck.

While some players may bemoan such a thing for a roguelike, it does make the Persistence more accessible. Without this constant stream of upgrades and improvements, the game would feel like a brick wall you are banging your head against, but for those that want the extra challenge, there is nothing stopping you from ignoring the upgrades and trying to play through the game without these incremental improvements. I personally liked this approach, It felt like I was progressing solidly, even when I had less successful runs, so I was learning to play by the game’s rules while not losing my preferred playstyle in the process. 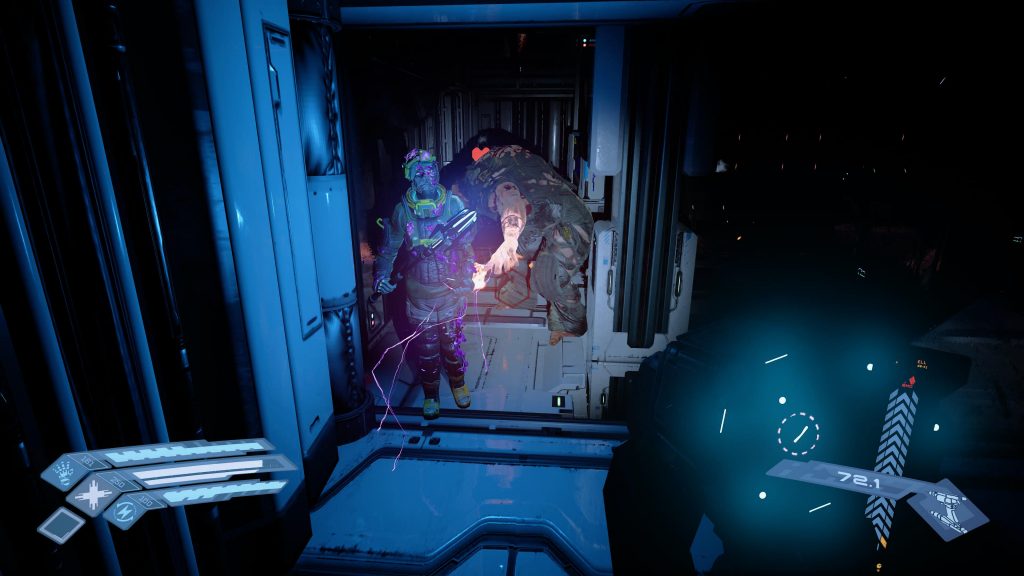 Progressing quicker helps with but doesn’t quite expel the sense of repetition throughout The Persistence. The problem with playing a game world built out of modular building block rooms is that things can get samey very quickly. Unfortunately, with the constant revisiting of earlier decks to get back to the one you died on, you do see the same rooms time and time again. This is further exacerbated by the issue with decks not changing in appearance from one to the other. The only thing that really changes in each deck is the type of enemies you encounter and the challenges they pose in addition to the environmental hazards which get harsher along the way.

The first deck is primarily about the standard enemy type, these human shaped mutants are the easiest to deal with, either with melee or ranged weapons. Move to deck two and things get a bit more dangerous; you encounter the bezerker, a hulk like mutant that is devastating if you get caught by one of his punches. Progress further than this and you encounter the bloodhound enemies, which slowly hunt you down, no matter which room you end up in, constantly following until you can dispatch them. With damage taken from enemies being high, each of these creature types can be a challenge to deal with, especially if all you have is the weak melee attack. With a few upgrades under your belt though, they are all quite easy to contend with and it doesn’t take much to work out strategies to take out each of these foe’s when you have the tools at your disposal.

Beyond this, there is not much else to it for the ten hour play time. Despite feeling repetitious and easier than your average roguelike, The Persistence is a solid game for the PS5. The addition of ray tracing is good if you don’t mind a lower frame rate and the added trigger functions for the Dualsense are a nice touch, letting you feel the bullets leaving your weapon of choice. It’s just a shame that the game still feels stuck in a VR engine. While there were no motion controls to speak of, the game does feel clunky at times, particularly in the movement and melee combat. It’s not a deal breaker though and if you are looking for a sci-fi horror themed palate cleanser, then you could do far worse than give this a go. 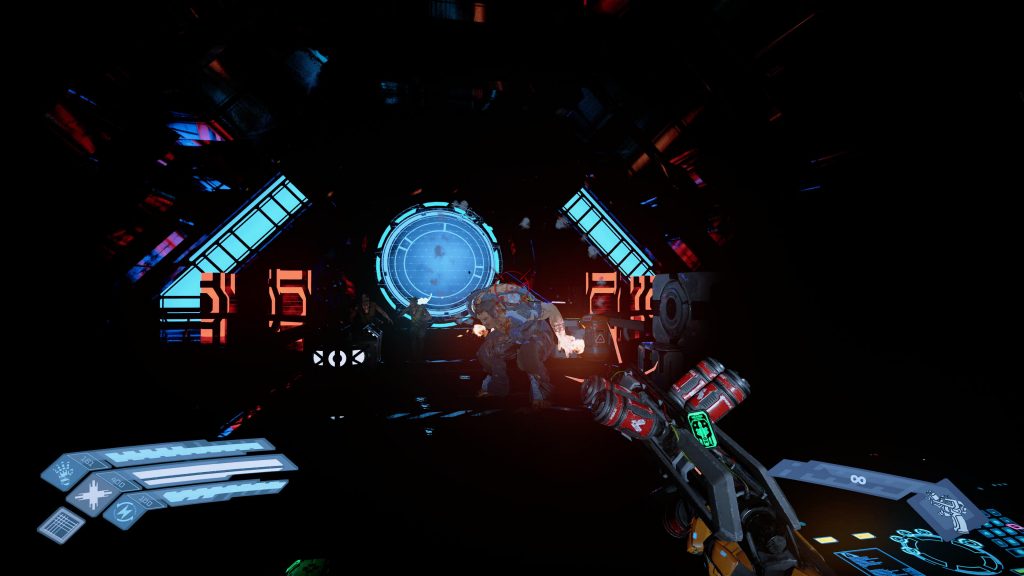 The Persistence Enhanced Edition
7 Overall
Pros
+ Suitably dark and atmospheric
+ Solid die-try again roguelike mechanics
+ Challenging, but gives you plenty of chances to succeed
Cons
- Combat can feel clunky as a result of the PSVR removal
- Enemy AI feels somewhat inconsistent at times
- The locales don’t vary much throughout, making the game feel samey
Summary
A solid roguelike experience, marred by the hangups of the VR platform which have been removed in favour of next generation visual trimmings. The Persistence Enhanced Edition holds up as an atmospheric sci-fi horror title with challenging permadeath mechanics, but repetition takes hold a bit too soon.