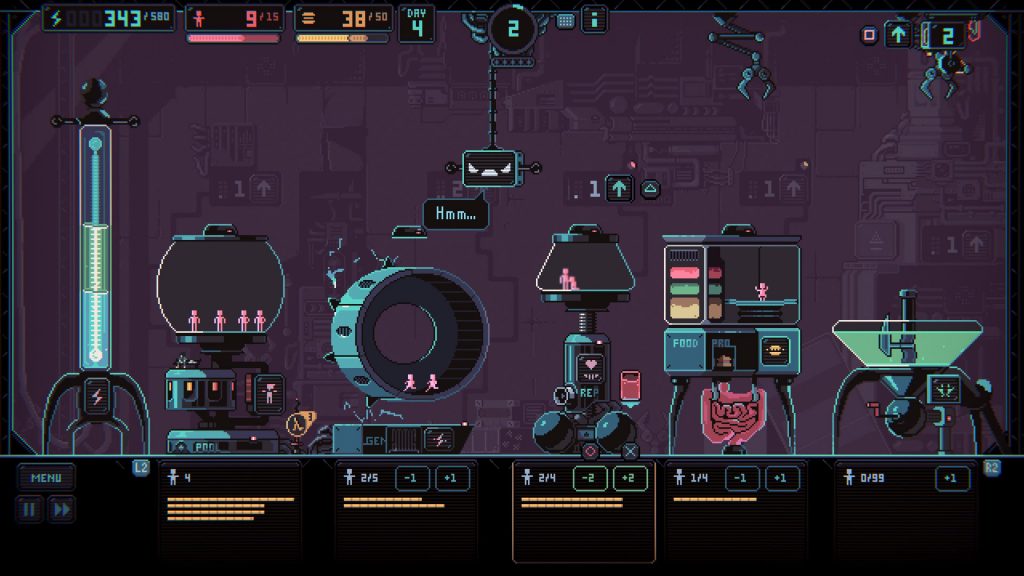 It’s hard to say where the indie development space would be without Rogue. Punters still can’t seem to get enough of that punishing, risk/reward concept and as a result, indie devs are not letting up on releases that feature some sort of genre mashup with these mechanics. However, out of all the many rogue-like games I have played for PlayStation Country, Depotism 3K feels like one of the more appropriate genre melds that I have seen.

As a resource management sim with punishing RNG mechanics, set in a post-apocalyptic world where robots reign supreme, Despotism 3K is perfectly pitched for most discerning rogue-lite fans. In Despotism 3K, you take control of a tyrannical robot overlord whose job is to enslave and grow their captive human enclave into a working factory, providing power for a continuous rule of terror.

To do this, the robot overlords have four main activities for the puny fleshbags to take part in. This ranges from the relatively basic generation of electricity by way of giant hamster wheel, a raunchy breeding tube, which sees a hilariously graphic pixelated party going down; to food generation and the nuclear option, which involves slinging humans into a bioreactor, generating both food and electricity.

Each of these areas has a role to play in your synthetic survival. Without the basic tick of electrical generation from the hamster wheel, you cannot spend power to upgrade the breeding tubes. Without food, the humans are unable to function and quickly die off. Without breeders, you cannot replenish your supply of supple humans, should anything happen to the other guys. Immediately, there is a balancing act to handle. Everything in Despotism 3K has a knock-on effect that results in success or failure and things are not quite so clear cut, you cannot simply just keep everything running and hope to win. 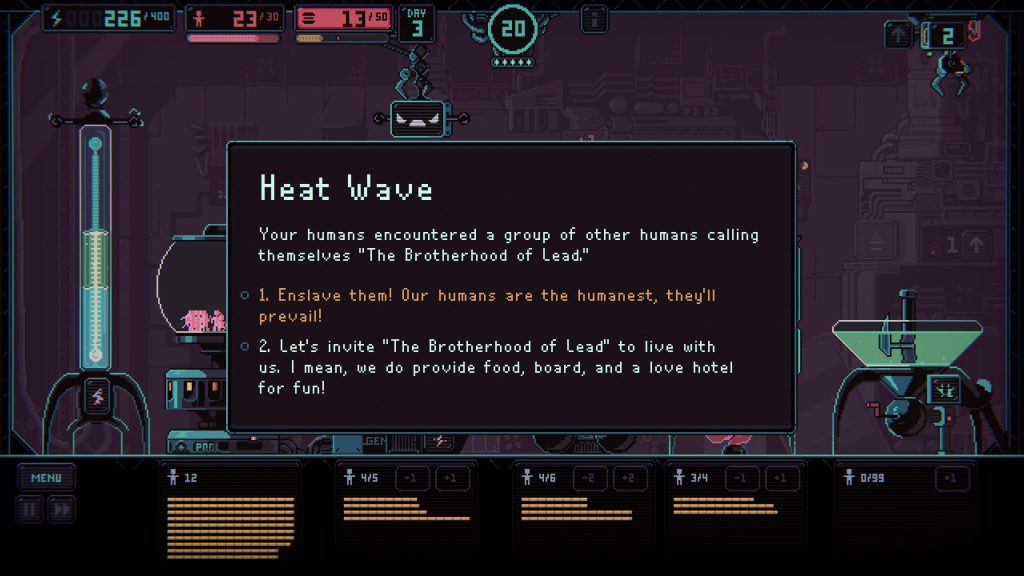 This is where your robotic arms come in. Using these, you switch humans between different stations, whether that be from the wheel to the holding chambers to let the humans rest before they die of exhaustion or carting humans to each of the stations to ensure these are kept up. At first, you only have two of these things, making slower movements and your ability to move humans both power and time consuming. Over time you can upgrade these for speed or add different types of arms which help streamline certain actions.

The tricky part is creating a working factory of flesh out of these different stations, within the limitations of your status. Simply plonking all available humans into each node and watching the results will only get you so far. Without careful management of upgrades, the despots risk wasting precious energy and not having the manpower ready when it is required. Also, as a rogue-lite the situation is always evolving due to random events in the apocalypse that require immediate attention and an adaptive skillset to combat or benefit from the effects.

As each day passes in the human prison, a random event occurs towards the end of it, In this, you are confronted with a potential issue. For example, on one day your sensors may notice the presence of marijuana in the holding tube which causes humans to chill out and not generate as much energy as they should. To combat this, you have three different responses to pick from, usually one that ends with the perpetrator being tossed into the bioreactor, the humans being made an example of or simply to be left alone. Pick the right choice and you get a small boost to productivity somewhere else in the facility, choose unwisely and you get a detrimental effect.

These detrimental effects tend to be quite punishing. In the case above about the humans finding marijuana, humans become so ineffective in their daily routines that they can seriously affect your chances of continuing, increasing the likelihood that you will have to restart to day one, losing any prior momentum you had gained. Other events can be equally, if not more devastating. In one of these cases, one of the humans was being a liability to the rest and the choices represented where three different methods in which to send the character to the bioreactor in subtle terms. Upon picking one of the three near identical choices, the human ended up not being able to even due right and it resulted in my bioreactor becoming damaged, tanking the electricity and food gains for the remainder of the day, which was enough to completely screw up the tactics I had been using up to that point. 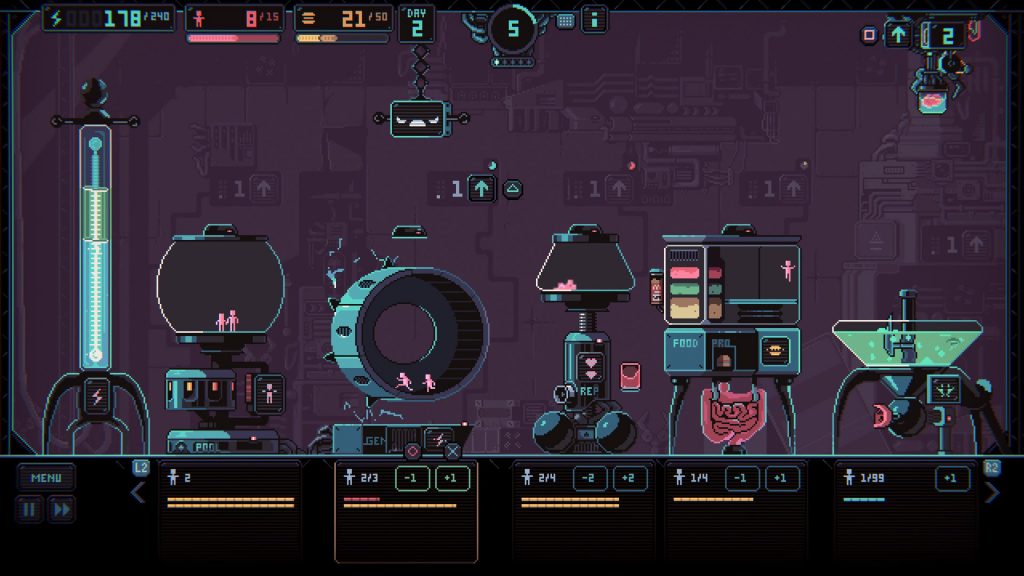 Unfortunately, this sort of RNG happens all too often and genuinely feels a bit unfair. I applaud the developers for wanting to breath some air of dark humour into the mix as Despotism 3K would be very samey without it. However, if you do not recognise the pop culture reference or get lucky with one of your choices, then it’s way too easy to be slung right back to the beginning, which is incredibly punishing, especially when you could be on a great run, only to be presented by several bad situations that result in an impossible to win scenario.

This feeling of futility is further felt by the upgrading mechanics. You really must watch your resources, otherwise you run the risk of not having enough power to get through the day or sitting at capacity for too long and improving in time with the ramp in difficulty. The biggest issue is that you cannot prepare in advance for the random events each day, there is no way of telling what part of your facility will be affected detrimentally, so you must progress blind, upgrading your wheel, breeding tube or bioreactor in the hope that they are being taken out of commission tomorrow, when you really need the energy from those sources to survive.

Win or lose however, you can pick up mutators for the core gameplay through Despotism 3K that can sometimes provide the edge that you need to proceed. My best run came as the result of one of these, which was a simple benefit that saw only the most exhausted humans being picked for the bioreactor as opposed to whichever was grabbed first from the holding tube.  This helped as I constantly had a supply of healthy and ready bodies to use. This coupled with a beneficial effect in game that resulted in twins being born constantly, I was able to power my facility using mostly just the bioreactor. Unfortunately, shortly after hitting this it was damaged in one of the RNG choices and I was once again thrust back to the beginning. 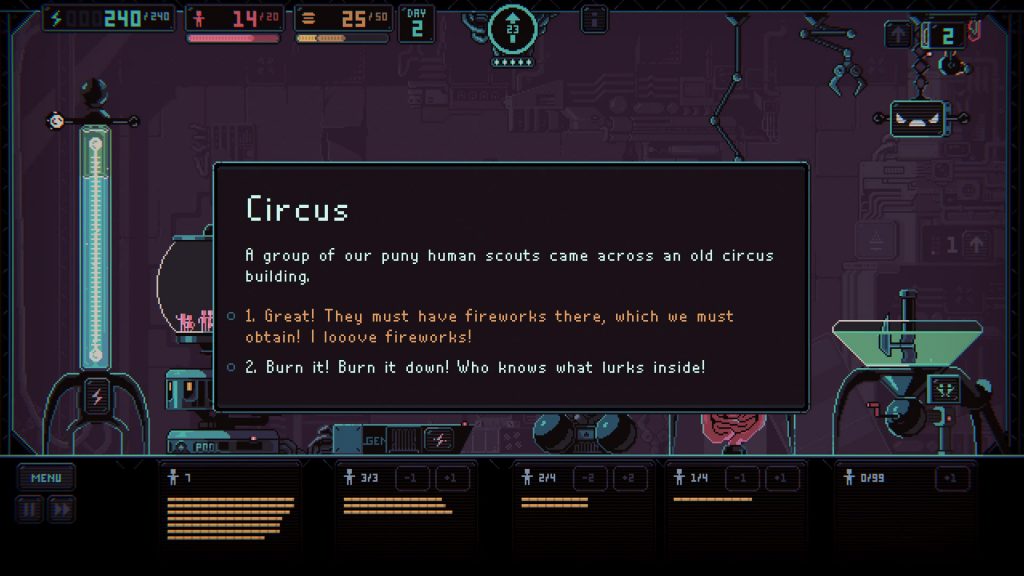 There are many more mutators to unlock. Unfortunately, however, due to this difficulty and the random mechanics, I was unable to get much further than this and not able to find the secondary campaign which is unlocked after surviving 25 days on a trot. I’m sure with more time that I could achieve this, however the amount of trial and error and sheer repetition that is required to get there leans a bit too far into chore territory for my liking. This is not to say that Despotism 3K is a bad experience. Far from it, it’s just definitely not for everyone and will likely end up being far too frustrating for some. Check out some gameplay first before you jump in on this one.

Despotism 3K
6 Overall
Pros
+ Has a simplistic visual charm with some great animation
+ Has that “one more go” vibe + Well written sequences, filled with plenty of pop culture and head scratching choices
Cons
- Frustrating RNG mechanics that can tank a good run in seconds with little chance to redeem
- Knowing what to do in the early stages can feel a bit obtuse, it takes a while to learn what is causing some failure states
- Starting a fresh run feels like a chore
Summary
As a punishing game-built on resource management and difficult choices, Despotism 3K won’t be for everyone. The reliance on trial-and-error choices contribute to consistent frustration. However, If you can break through this difficulty layer then you will find a unique and hilariously mean-spirited title that will keep you busy for hours.