Get Packed: Fully Loaded is a bells-and-whistles update of the Stadia (LOL) title Get Packed and is a co-op focused, physics-heavy co-op title where you act as a removal firm, clearing out various properties.  It comes to us by way of the Cornish coders, Moonshine Studios and is out now for PlayStation 4.

In the game you play as a team of furniture movers who take advantage of the fact that their home town is being taken over by ‘Industrial Salt Co’ and evicting all the residents.  This of course creates a demand for removers and so your team (of up to four players on or offline) to facilitate the evictions by filling up your van with the contents of the townsfolks homes.  This is all explained along the way by a series of story cutscenes narrated by someone doing their best Chris Parnell impression. 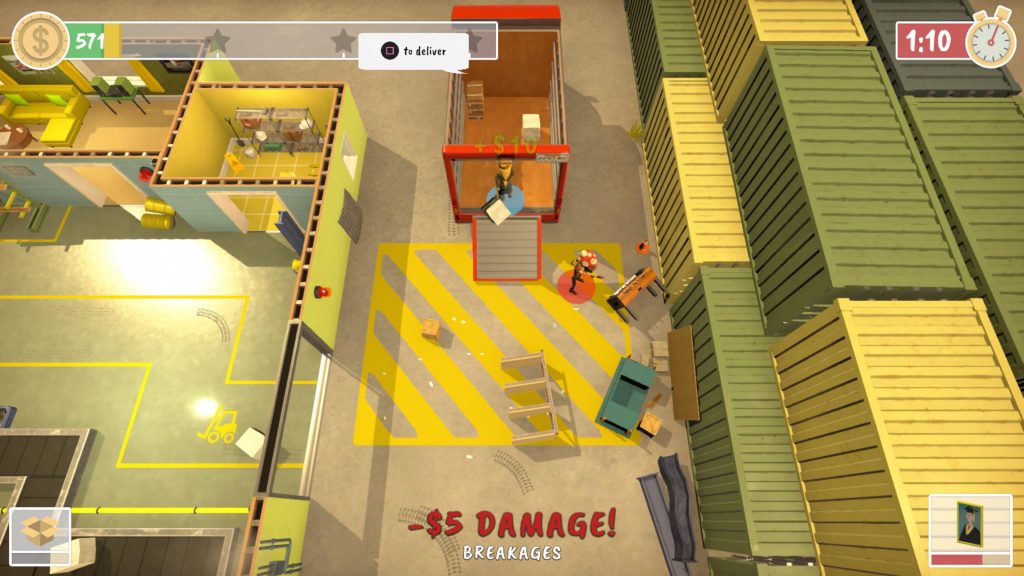 Once you get into the game, the basics are easy to understand.  You move with the left stick and grab stuff with

.  Those triggers act as your left and right hands respectively, allowing you to grab two objects.  Then it’s just a case of getting the stuff out of the house and onto the van which sounds simple enough but Get Packed likes to exaggerate the physics a bit and so you’ll be dragging, and swinging, these objects around as you run back to the truck which can lead to accidents.

Progress is all about cash.  You get credited with cash for safely getting items onto the truck and sending it away.  The truck will then be unavailable for 15 seconds) which can be a problem if one of the players is in it when it goes!  Any damages take away from your cash total of course and when the level ends your total will then give you a rating out of three stars.  You only need one star to finish the level and move onto the next but the replay value comes from getting top marks of course.  You can also earn more cash by packing specific items, within a time limit, and completing bonus objectives.

So, about now this should all sound a bit familiar.  Didn’t Team17 put out a game last year with exactly the same premise?  They did indeed.  We liked Moving Out quite a bit and certainly the games are pretty similar.  Where Moving Out maybe scores higher on presentation, we actually found that we enjoyed Get Packed a bit more.  Here the co-op action is less based on actual cooperation.  Where Moving Out had large objects that needed multiple players to move them, here any player can move anything.  That gives the game more of a faster, manic edge where it becomes about trying not to smash everything rather than puzzle solving your way around.  Moving Out was certainly more tactical with certain scenarios, such as getting a large sofa out of a door, requiring much more thought where as here it’s really just about moving fast.  That gives this game more of an arcade feel.  It also makes it a lot more accessible.  Also here sending off the truck at anytime means you don’t have to worry about Tetrising everything into it.

This isn’t a long game.  The five levels each have three stages that are three and a half minutes long so you can be done with it initially pretty quickly but that’s probably better than having a huge campaign as it means you can dip in and out of the levels to improve your score without feeling like you’ve got a massive task ahead of you if you want to three star everything.  Also, they do keep things interesting with a cleverly executed plot that sees your team moving on from regular removals to such things as bank robbery, prison removals and even working for the FIB (Fellows in Beige).  It’s all in good fun and the variation helps. 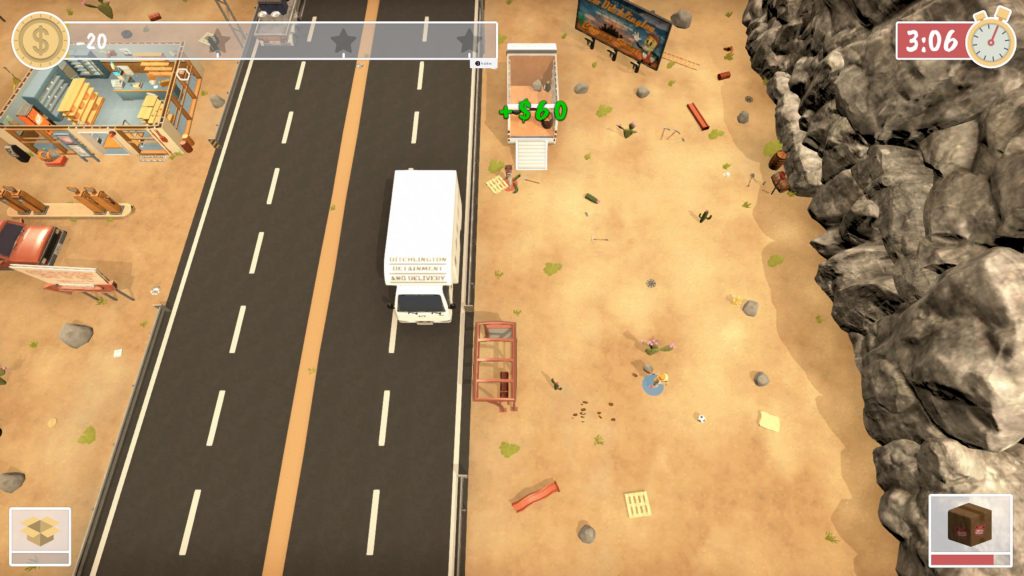 This leads to new obstacles being added to levels but what’s great is that they never overcomplicate the core gameplay.  Sometimes with games like these (action-puzzlers), each new level adds a new mechanic which makes the story modes feel like extended tutorials but that’s not the case here.  Instead what you get are things like roads to cross, huge slides to use, conveyor belts (that give the game a bit of a Tapper feel, for those of you who are ancient like us) and other little quirks but they don’t fundamentally change the gameplay enough to complicate things.  We’re a fan of this game’s approach.

While the game can be played solo, this isn’t recommended at all.  Obviously in these COVID times, getting four people together (are couches even that big?) might be tricky but even with two people the game is a lot of fun.  There’s an online option too (unlike Moving Out) but currently the servers are a little dead.  Playing with friends online is a great option though.  The game also offers a versus mode (where players have their own truck to fill) and a destruction mode (where the objective is to smash everything) which rounds out the package nicely. 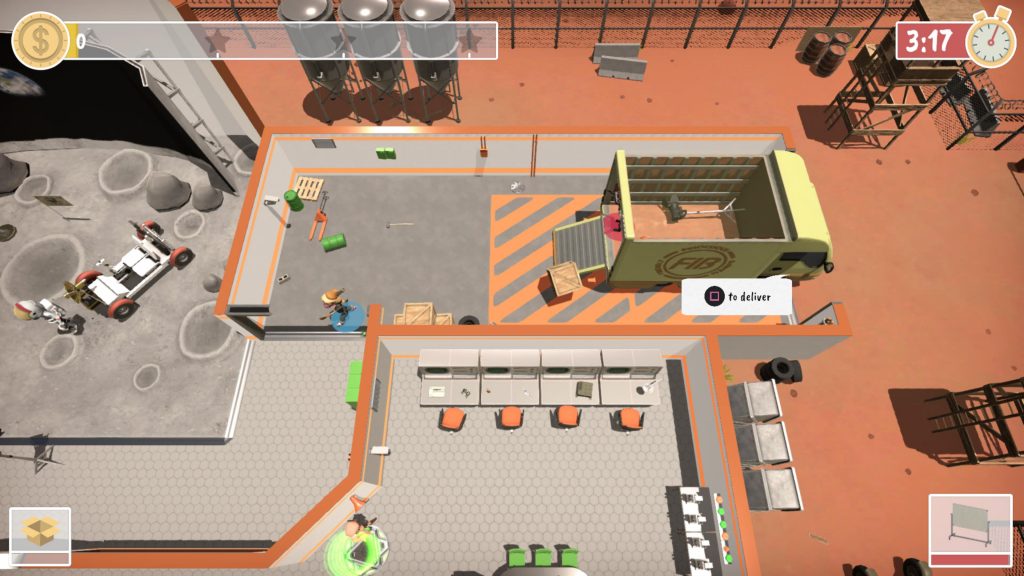 In terms of the game’s presentation, there’s nothing here to wow you but the game has a fun, cartoony look to it and it does well to present the chaos of the game.  Thankfully, the level design is always pretty compact and straight forward and so everything is always very clear.  The cutscenes are fun as well with the story progressing in a fun direction that also helps give the game some variety.  And while the voice acting is okay, the rest of the audio is implemented well enough with chirpy music and good, crashy sound effects.

We weren’t expecting much from this one.  Moving Out was fun but soon forgotten and not a game we’ve felt the need to revisit so the idea of reviewing a clone of it from a smaller studio wasn’t all that compelling but Get Packed has really surprised us.  By taking the formula and simplifying it while giving it more of an arcade focus, it has turned it into a raucous, streamlined arcade experience and we’re fully onboard.

Get Packed: Fully Loaded
8 Overall
Pros
We've seen this style of game before but by stripping out any real need for strategy and thought and instead turning the game into a raucous smash and grab arcade experience, the developers have created an instant party game classic. Get Packed is the co-op removals game you never knew you needed.
Cons
+ Really fun gameplay
+ The story is well implemented
+ The chaos of the physics and controls are judged perfectly
+ Extra modes are a nice addition
Summary
- Fairly ordinary presentation
- Some players might want more depth
- Character customisations take a bit too long to unlock