Cake Invaders is a shoot ’em up from Japanese devs Zoo Corporation that plays out like a modern version of the old Atari classic Missile Command.  It’s published by Eastasiasoft who are known for their prolific Ratalaika-style, easy double-Platinum ports and is a port of the PC version that came out in June 2021.

There’s a thin plot to address here which is that you play as a group of Japanese people on a space ship who have to protect their German cakes (Baumkuchen) from hungry alien invaders.  Of course, this is all done in a cutesy style with cheeky little characters stood on cakes that actually look like beige rainbows shaped like the ones from Rainbow Islands. 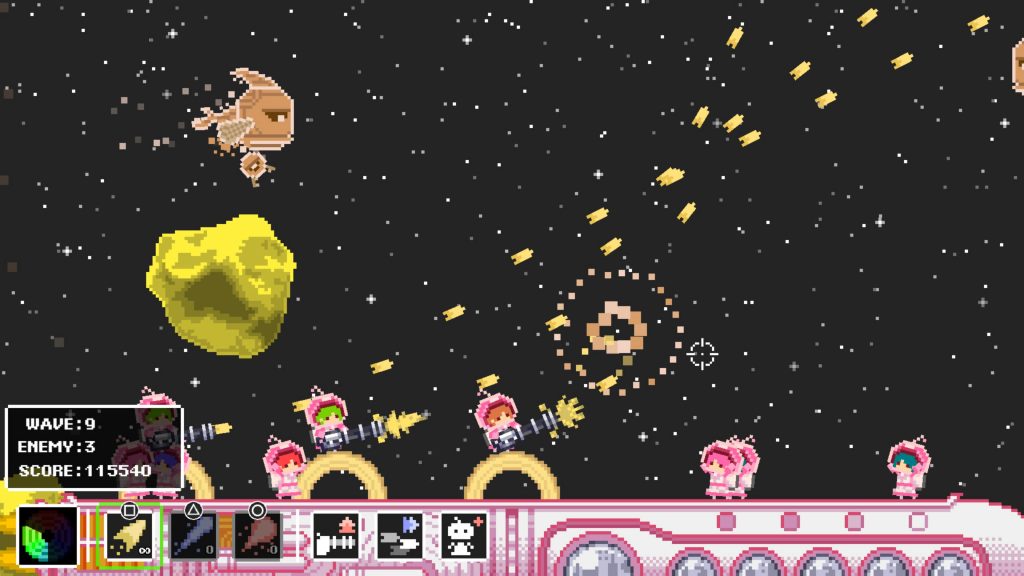 After a fairly clumsy attempt to explain the mechanics, you start off as one gunner stood on the middle of five Baumkuchen.  Aliens stream in from the top of the screen in waves, always heading downwards in an attempt to steal your cakes.  Well, what actually happens if one makes it is that a layer of cake will be removed.  Lose all your layers and you’ll lose the cake, lose all the cakes and you’ll lose the game.

You fight back by firing your chain gun upwards at them.  You can use either stick to aim it but, slightly confusingly, you’re controlling a cursor and not specifically aiming the gun, so there’s a bit of a learning curve early on.  Indeed the first few levels are some of the toughest you’ll face, mainly because you’ll be getting used to those controls but also facing the fight with the least firepower you’ll have.

During each level power-ups arrive and have to be shot in order to get them and eventually you’ll get an extra gunner who will be stood in one of the remaining four cake locations.  This gives you twice the firepower but also a bit more coverage as bullets don’t end at your cursor and so you can create useful crossfires.  This continues all the way up to five gunners at which point you’ll be fairly unstoppable for a while. 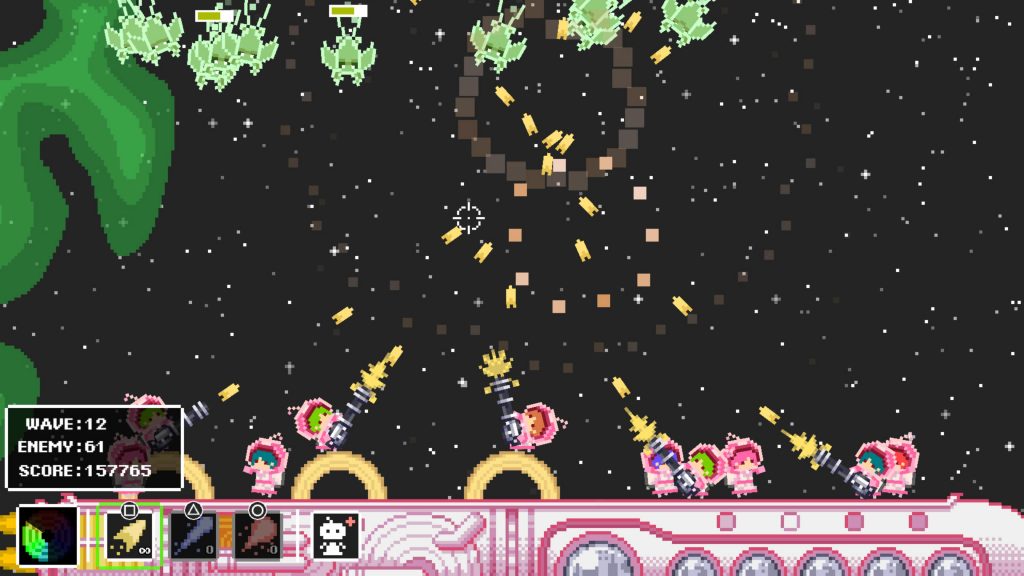 However, after wave 15 or so, the enemy spawning rate really speeds up and between that and your single cursor, you might struggle to keep up.  Of course, by this point you’ll have earned nearly all the trophies anyway (apart from one specific one that you’ll need to go slightly out of your way to unlock).  We struggled manfully on until dying on wave 19 and on our second proper go we got to 26 at which point we’d basically earned both Platinums.  After that you’re really just playing for score (and to be fair there is an online leaderboard to encourage such things).

There’s a little something going on where you get more powerful ammo, selected using the face buttons, but this runs out super quickly and is more of a distraction than a help.  It did occasionally help us out of tight spots though.  It did feel that early success was more about how many gunners we could get early and also how many additional cake layers we were gifted but overall we feel as though the randomness does even out over time. 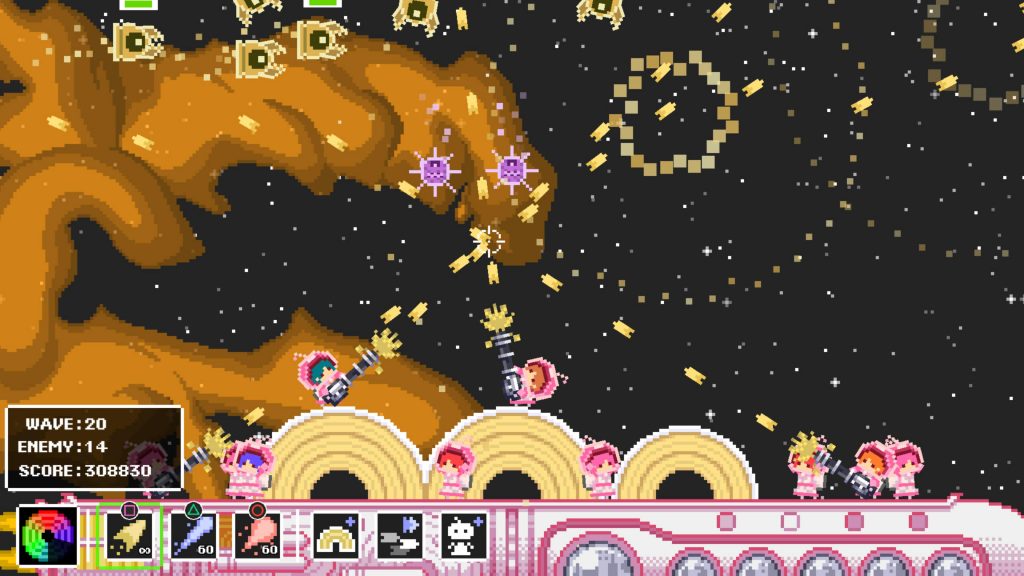 So while there’s not much of a reason to keep going, there’s plenty to like about Cake Invaders.  Once you get used to the aiming, you do get a nice take on the Missile Command gameplay (that we’ve always quite liked) and the cute visuals and constant action are quite enjoyable.   We liked that once a cake is lost, it’s lost for good.  This gives the game a real old-school urgency and there’s no IAP nonsense in the game unbalancing the challenge for competitors.

Cake Invaders is undoubtably short and fairly basic but it’s an all-action title that’ll keep you entertained, albeit possibly only for an hour or two unless you’re interested in bragging rights and given that we currently sit 12th on the leaderboard, we want in on that top ten so we’re not uninstalling this one any time soon.  You do get identical PS4 and PS5 versions with the latter feeling a bit snappier to load but that’s the only difference but this is one for trophy whores and old-school coin-op fans only.

Cake Invaders
6 Overall
Pros
+ A fun take on the Missile Command gameplay
+ Frantic action
+ Online leaderboards
+ Easy to get into
+ PS4 version included
Cons
- Short-lived
- Quite basic
- Controls take a minute to get used to
- Weapon power-ups aren't very satisfying
Summary
Cake Invaders takes the classic Missile Command formula, applies it to Japanese people defending German cakes and ramps up the action so much that really it all burns out in an hour unless you're up for some leaderboard action. It's cute, fun and entertaining though and that's good enough for us.