Darksiders Genesis came out on PC (and Stadia, yeesh) towards the end of last year but we’ve not had too long to wait as now it’s on PS4. It’s had a slight change to the gameplay from the main series and it’s the first time we get to play as Strife, the fourth Horseman. You can do this all in co-op too, what’s not to like? 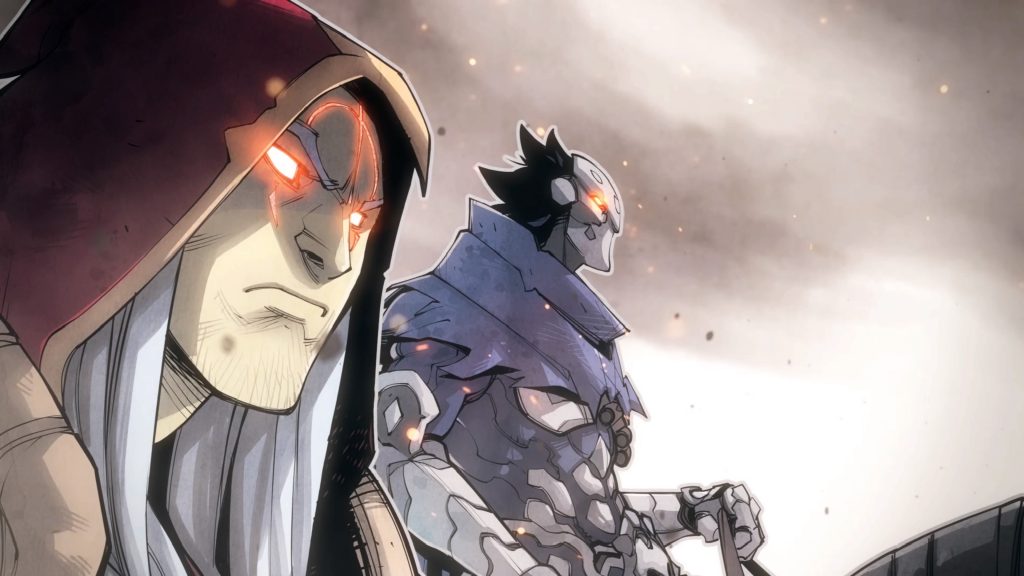 As this is a co-op game, local and online (though you can play the entire thing solo if you wish), you get two of the four horsemen to play with this time around. War and Strife team up to work their way through the minions of hell and maintain balance for the Council. War plays the straight man to Strife’s comedy which sometimes misses the mark but is an enjoyable partnership.

The game is broken up into levels this time around, separated with trips to The Void (accompanied by a terrible echo filter) to purchase upgrades. This allows levels to be replayed at your leisure, so rather than backtracking to find those missing collectibles you can simply choose to play through that level again. Things haven’t changed completely with a Metroidvania element forcing you to return to previous levels with new abilities if you want to go for 100% completion.

The obvious difference is the camera. Instead of being a third person, action platformer with the camera close in it’s a third person, action platformer with an isometric perspective. Otherwise a lot of the elements are the same. Combat will differ depending on whether you’re controlling War or Strife (you can switch between the two on the fly in single player). War plays similarly to how he did in the first Darksiders, he gets in there and hits hard with a dash and block/parry helping to mitigate damage. Strife, although he does have melee attacks, primarily uses dual pistols allowing him to circle around arenas taking down enemies and summoning turret like shadow clones. 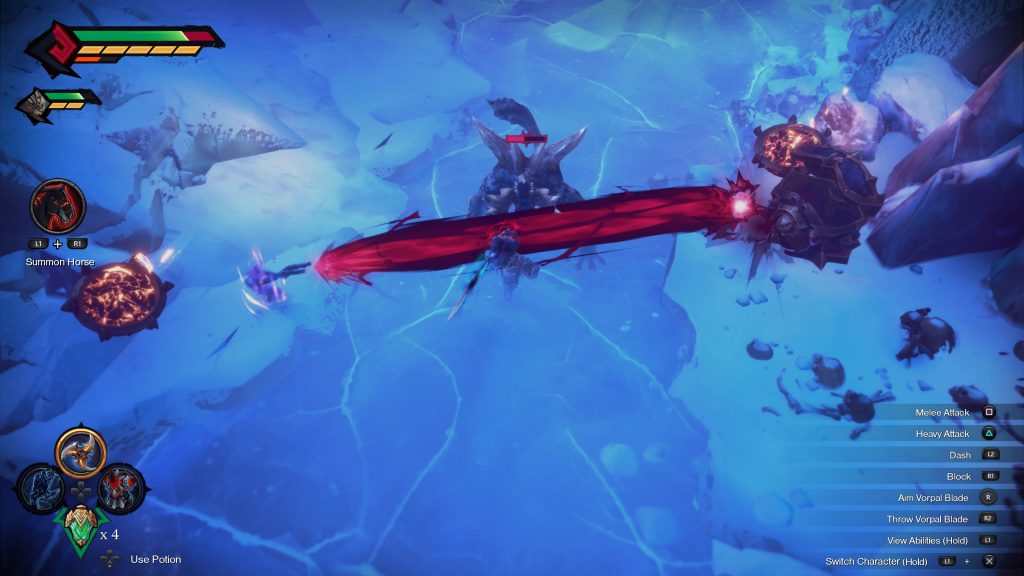 A mixture of button presses give you a wide range of moves, with powerful attacks limited by meters. Strife also builds a Hotstreak meter as he attacks, increasing his fire rate and fire power for a short time. He’s definitely the more interesting character to play, though switching between the two in single player is necessary to protect health (co-op requires a revive, single player has the character out of action for a period of time) and use specific puzzle solving abilities.

Exploration is the other main pillar of the game. You have a map to aid you in this, although it’s not as helpful as it could be thanks to the fact that it doesn’t show your position on it, only the area you’re in. Exploring for items can involve fighting, puzzle solving or platforming which with the new camera angle can be a bit of a chore. Objects you definitely can jump on can take multiple attempts as your character just rubs up against the edge whilst at other times I jumped on objects that felt like I shouldn’t have been able to. Objects floating in mid air can be difficult to locate in 3D space also. 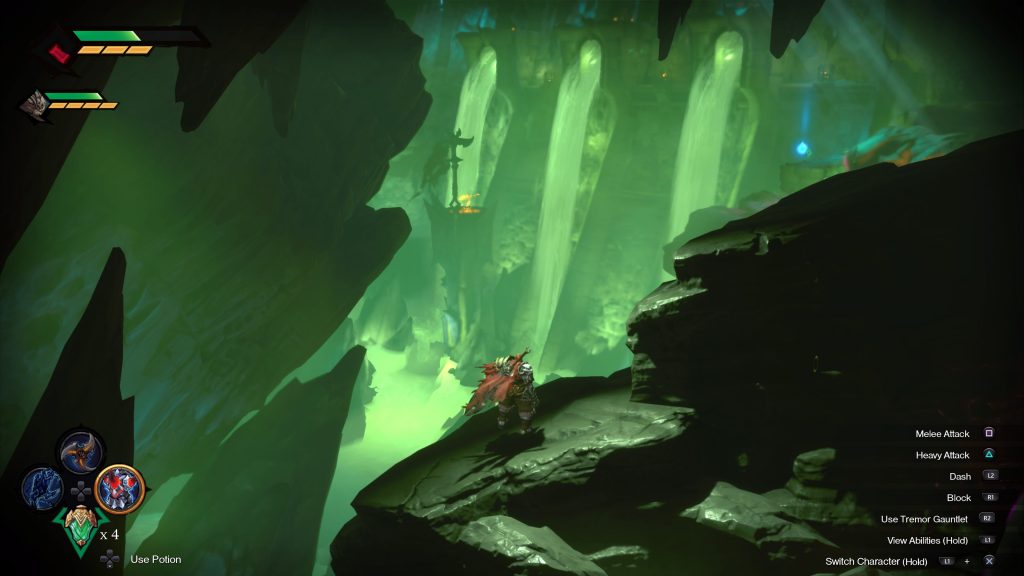 Each level can be of varying length, with exploration heavy levels taking quite some time whilst boss levels contain only the boss itself. Depending on your play style (returning to previous levels often to collect things or complete challenges) you can probably be done in around fifteen hours but there is plenty to get on with if you’re going for 100%. As well as extra difficulties there’s an Arena mode which rates your score and gives you easy access to certain enemies to try and collect their cores.

Randomly dropped from enemies these will give you buffs which you can build out your own skill tree with. It’s quite complex but adds a bit of depth to proceedings allowing you to grind out multiple of the same orb in order to level them up and develop your own build to support your play style.

All this combines to make an okay Darksiders game. Despite the levels being very separate they do end up feeling quite samey. Enjoyable enough but nothing too exciting, I actually enjoyed the flawed but interesting Darksiders 3 slightly more. Exploring and completing challenges is suitably rewarded and breaking the game into levels makes it easy to play in chunks but it doesn’t really do much that Lara Croft and the Guardian of Light wasn’t doing nearly ten years ago. 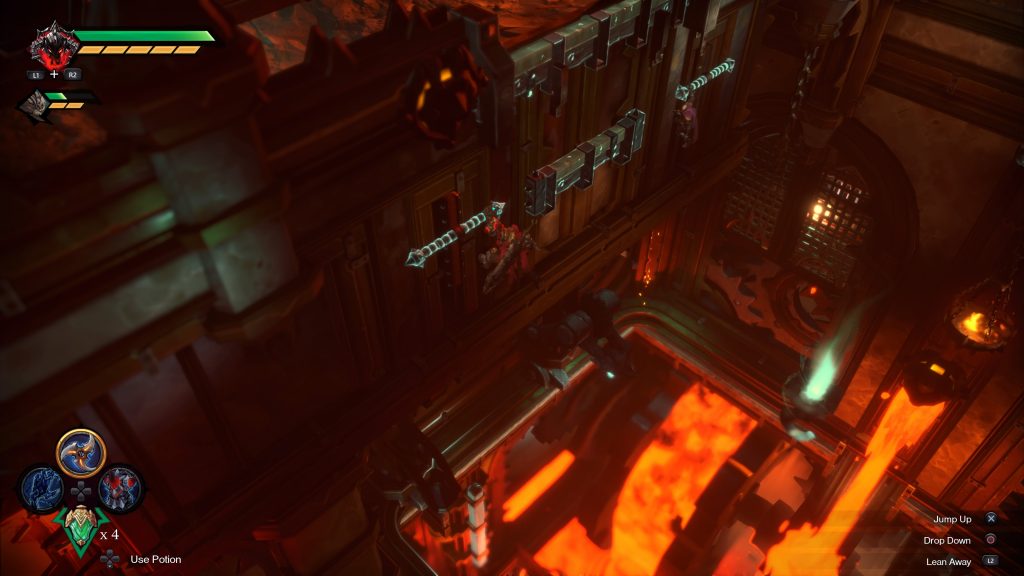 Fans of the series looking for more from the characters will probably get some joy from Darksiders Genesis. The new camera angle brings its own challenges and the lack of open world is different but in reality this is still very much a Darksiders game. It’s nice to finally play as the fourth Horseman and his gunplay suits the gameplay well but there’s not too much here to make it stand out from the other games in the series or other games of this type.

Darksiders Genesis
7 Overall
Pros
+ Finally get to play as Strife
+ Fully co-operative
+ Levels break up the game into manageable chunks
+ Addictive to 100% levels
Cons
- Platforming can be an issue
- Some awful sound in the form of echo
- Not enough variety
Summary
Darksiders Genesis changes the camera angle but brings a lot of what fans enjoy about the main series. It does get a little repetitive but the road to 100% is addictive and everything's better in co-op.