Project Starship is a cheap and cheerful vertically-scrolling shoot ’em up by Panda Indie Studio and it is available now on PSN.  It’s a game that gets a lot right but also a few things wrong.

The premise of the game is pretty simple, you pick from one of two playable characters – Garret or Gwen – and these each have their own power ups.  You then pick from Easy/Hard difficulty settings and are thrown into the game where you have just a few controls.  You move the ship with the left stick or d-pad and aside from that you have buttons to allow you to shoot, slow down or use special weapons. 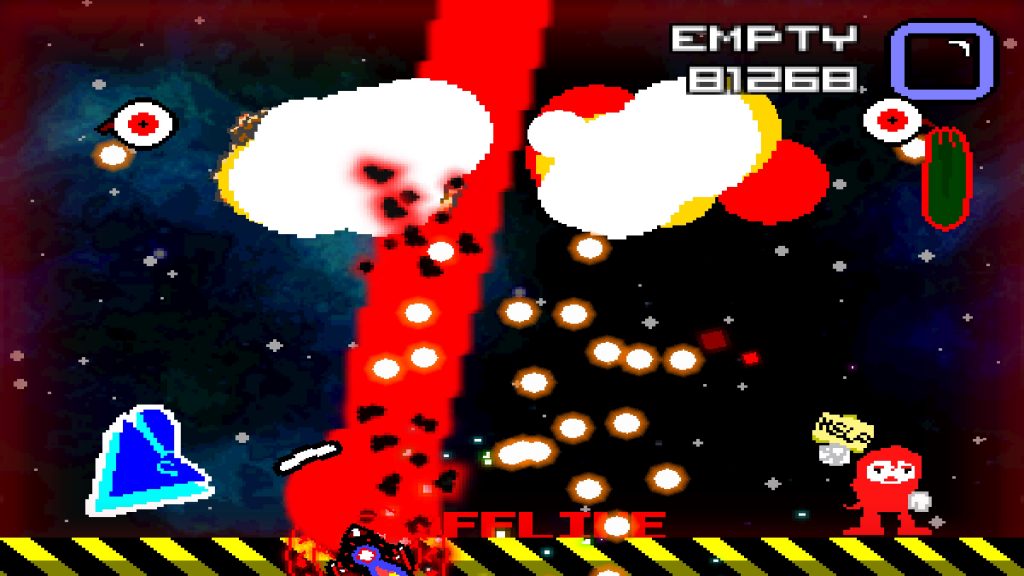 If you’ve ever played a shoot ’em up of this type, you’ll know what to expect.  You’ll press ever upwards, shooting enemies that drop down from the top of the screen filling up the play area in the traditional ‘danmaku’ (bullet hell) style.  However, it soon becomes apparent that this game is a little different.

This is mainly down to the visuals which are low-res but extremely garish and colourful.  It’s an usual visual style to pick but the action is still clear enough and it does add some excitement but as you go along the other main quirk of the game is that it throws some very meaty power ups your way.  Before long you’ll be armed with screen filling lasers, missiles, turrets and shields depending on which character you pick.  But also you’ll have access to one-use power up items too. 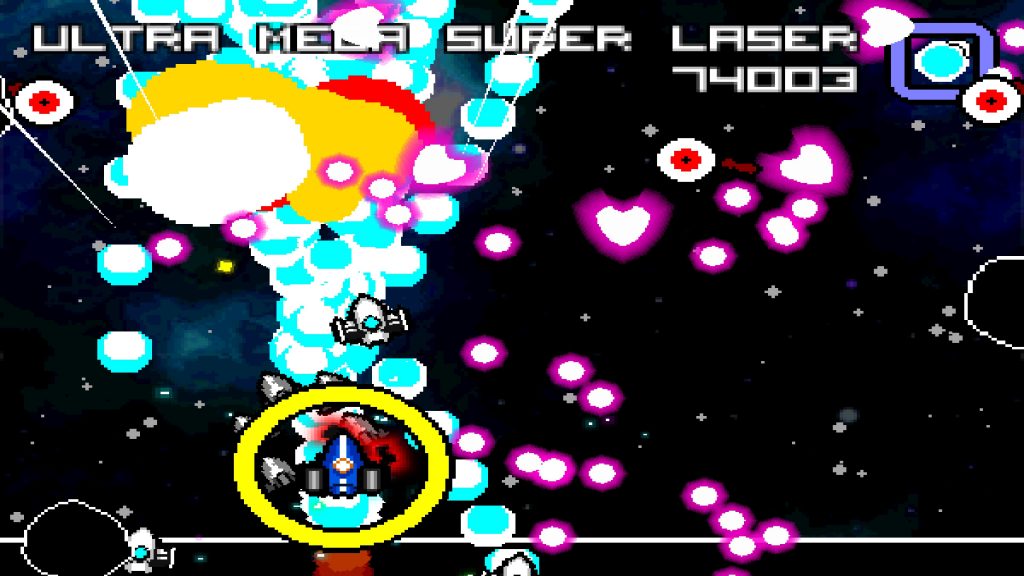 These are very weird.  One of them disables the screen, another makes it sound like you’re making a phone call (for literally no reason) while others are a bit more useful, filling up the screen with even more firepower.

The game is procedurally generated, which is a double edged sword really.  On the one hand it’s nice to just blast your way through the levels without having to memorise things but the downside is that there’s no level design as such and so it can all feel a little bit clumsy from a design point of view.  Apart from the boss battles that is. 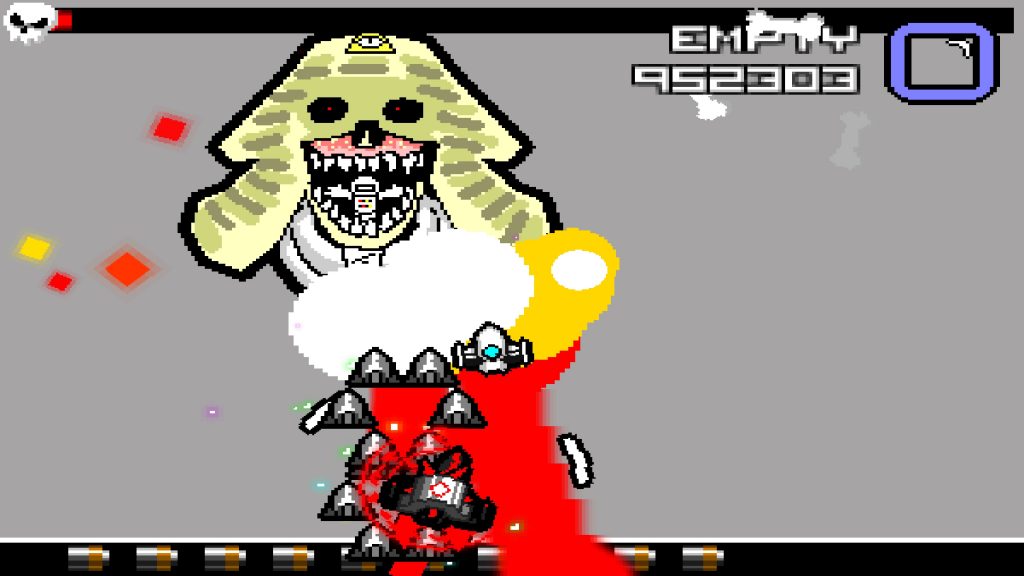 You begin the game with five shields, essentially your lives, but you earn more as you go along but again this is all quite random.  On our first go (with Garret) we barely caught any power ups and lost our shields fairly quickly.  Then we picked Gwen and did a lot better, thinking that she was the better character to play as.  But then we tried Garret again and completed the whole game.  And there in lies the biggest problem with game.

Until that point we were enjoying it a lot and had already started considering giving the game a 7 or 8.  Hard difficulty does change things up a bit and offer a lot more of a challenge but maybe a middle difficulty would have helped but more than that, the game needs a lot more levels.  You’ll see the whole game in less than twenty minutes and that’s not good.

On the plus side, the presentation is pretty good.  The visuals like we mentioned before are pretty unusual but do give the game a unique look but it is the music that we particularly enjoyed (albeit at the cost of the sound effects which are oddly muted, even more so if you hold the fire button down).  Indeed the musicians get pretty high billing in the game and at times Project Starship feels like one of those crazy 1990s Commodore Amiga demos where the tunes are backed up with mad graphics.  Interesting for a demo but maybe not something that can really be called a full game.  We’re not the sort of site that uses cheapness to excuse bad game design decisions but the £3.99 price point does soften some of the disappointment.

There’s something here though, a hint of a better game in the future and we are tentatively looking forward to Project Starship X  in the future (due on PCs in May 2020).  If Panda Indie Studios can harness some of this creativity into a more substantial game, we’ll be very happy to play it.

Project Starship
6 Overall
Pros
+ Crazy visuals
+ Good music
+ Satisfying power ups
Cons
- Over far too quickly
Summary
There's a really fun vertically-scrolling shoot 'em up here but the game is over far too quickly and that's the only real knock against it.