I quite like the time based platformer genre. Super Meat Boy is the best example, but I’ve enjoyed Shio on the PS4 and 10 Second Ninja X is a good example of a game that isn’t just about platforming but disposing of enemies in a timely fashion too. Damsel has more in common with the latter, yes there is a time element and there are platforms to jump between but there are far more mechanics at play than that. 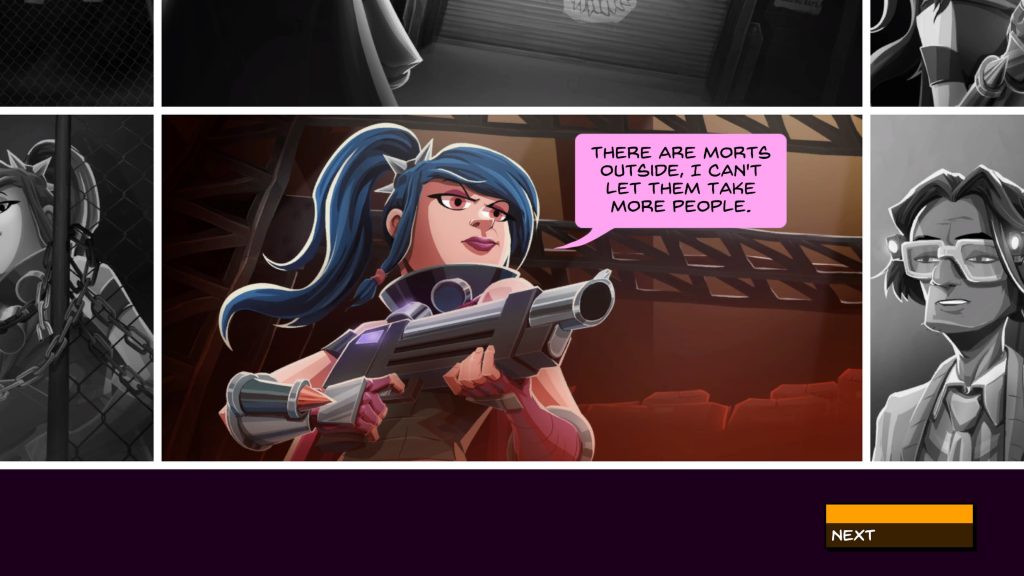 You play as Damsel, a vampire slayer. If you play the Campaign mode then you’ll get some comic-style panels to give you an idea of why you’re running through levels killing vampires but in all honesty they may as well not be there. There’s no real character to Damsel or her handlers and they’re merely there to set up some very simple level objectives across the 75 2D, arena-style stages.

These objectives will always be to do a certain amount of something. Initially it teaches you to collect skulls so your objective is to collect all the skulls with no enemies around. Then it introduces coffins, which are sleeping vampires who pose no threat so destroy all of those. Then they’ll bring in enemies which come in many forms and obviously become harder and more advanced as the game progresses, so kill all of the enemies. Then there are things like hacking computers, saving hostages, disarming bombs and activating terminals.

No matter the objective once a mechanic has been introduced they’ll be there in the level. You can ignore them but Damsel is a score chasing game so you want to do as much as you can as quick and efficiently as you can. The backbone of this scoring system are the skulls introduced in the first stage. Collect skulls and you’ll start a combo and continue collecting skulls to boost the combo but go too long without collecting a skull and that combo breaks. 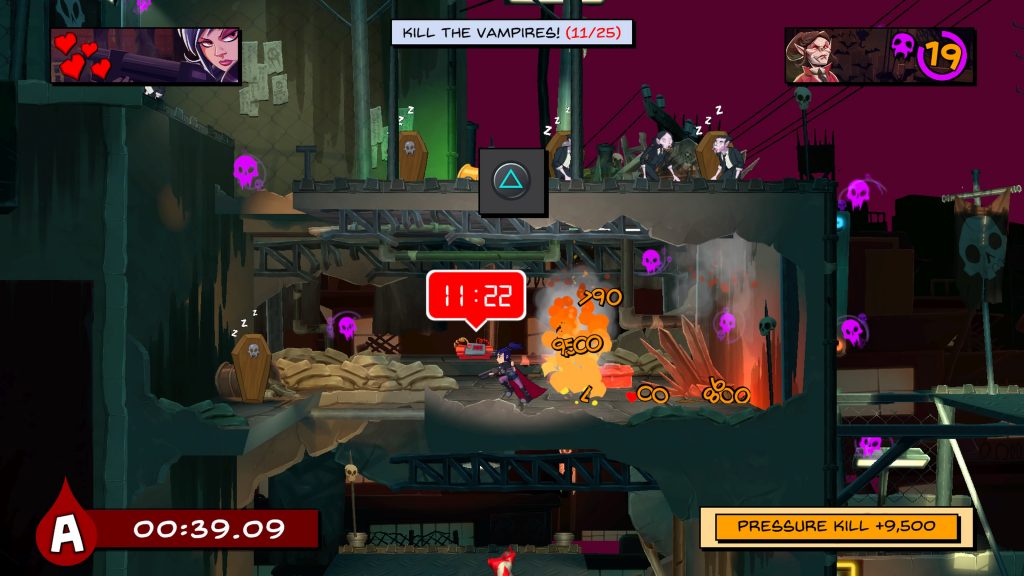 Running through a level, collecting the skulls and completing both optional and main objectives will maximise your score which will be shown on a leaderboard upon completion, along with a separate leaderboard for time. You don’t need to be quick to progress on the normal difficulty but it will improve your score. The hardest difficulty however requires you to never break your combo. There are Red Mist Challenges littered throughout which act just like other levels but you do get a grade at the end of it, seemingly purely based on time rather than score, but again as long as you finish it these don’t gate your progress.

Initially I was quite happy score chasing. I was often close to the top of the leaderboards so at times I’d replay a level over and over to get a better time or improve my score. However that quickly started to dissipate as I progressed and the levels became more complicated and with it messier. See, unlike a pure platformer like Super Meat Boy all the objectives in Damsel need different inputs and can overlap. By that I mean you need to shoot/melee vampires and coffins (the shoot turns into a melee attack if you’re close enough) but these attacks can hit the hostages failing the mission instantly. 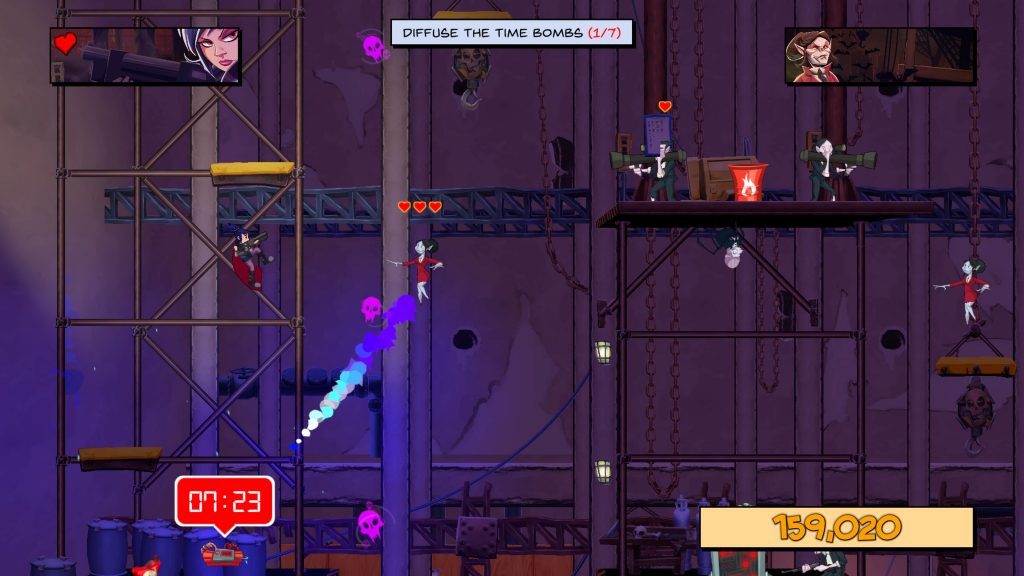 Hostages need to be untied by stopping on them and tapping

until they’re cut loose, similarly bombs require you to press

and then time the presses to disarm the bomb. Doing this whilst killing vampires, avoiding shooting the hostages, avoiding shooting explosive barrels that are near to you or to hostages, trying to spot cameras which will spawn more enemies if they see you or laser grids that block your path is incredibly difficult. You can take multiple hits and even regain health with special barrels but levels get so busy that you’ll need multiple attempts at them to get through, let alone worry about your time or posting a good score. If you want to increase you score then you can actually gain more skulls by dashing through enemies before you kill them which is a nice risk/reward mechanic but only for advanced players.

Levels aren’t overly short so you’re required to be on your game for a couple of minutes at times, and the camera is pretty close in so you don’t really have a massive amount of awareness of what is around you which can be a problem if you need to drop down, for example. I actually quite like the visuals to look at, but whilst playing they make it very difficult to see what’s going on. Nearly every time there was a laser grid I’d run into it because I couldn’t see it and later on they introduce these bumpers like on a pinball machine that you can’t pass which just blend into the background perfectly. With so much going on you need to be able to read the screen in an instant but you simply can’t. 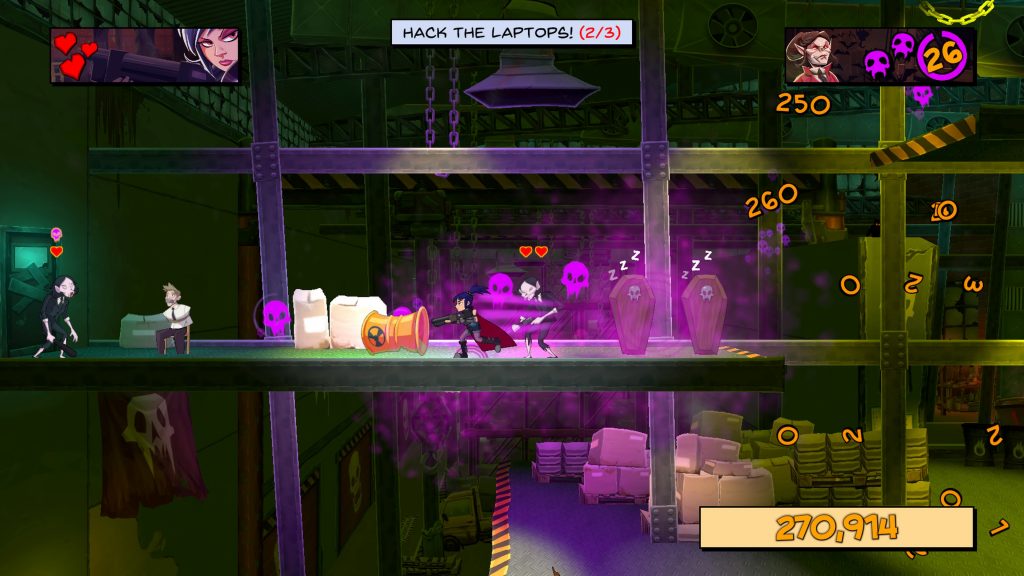 I’m sure there’ll be people out there who will become amazing at it but to me it feels like that would be in spite of the level design, you’ll have to brute force your skill rather than a natural and nurtured approach by a more tightly designed game. There are many game mechanics here that I like but how they’re utilised is poor and the controls aren’t quite there, with annoying things like Damsel grabbing ledges when you don’t want to or simply not being as responsive as you’d like.

If you do get into it then there’s more challenge to be had beyond the harder difficulty in campaign mode. There is Arcade mode which gives you three lives to complete a level, bouncing from one level to the next without any story. If you do lose all your lives then it’s game over and you have to start from stage one again. The stages are broken up into 25 level chunks but that’s still quite a lot of levels to complete, especially if you accidentally kill a hostage which happens quite often. 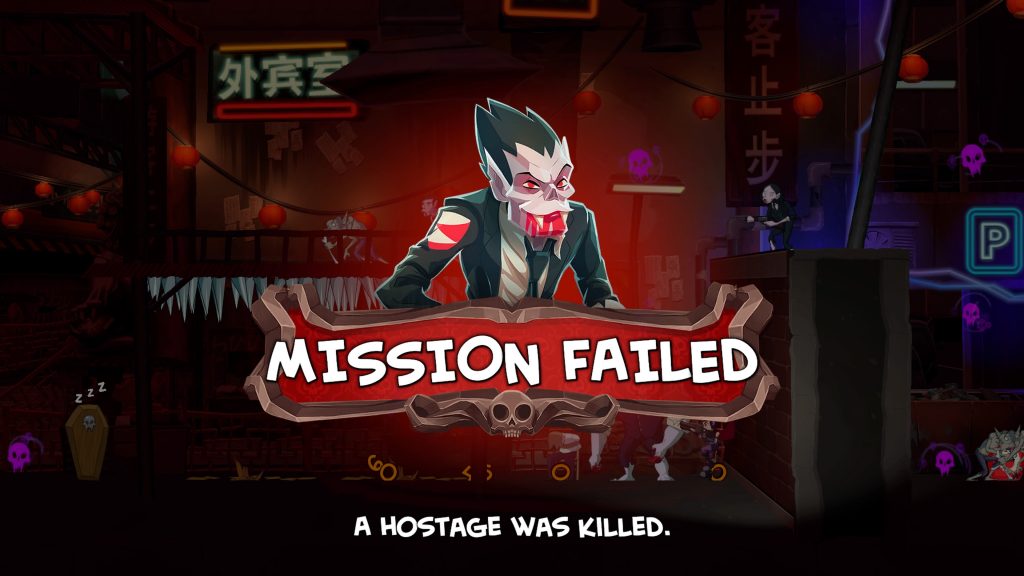 That’s it for content but the price is about right for how much is here as the 75 levels will take you a while to get through, even beyond jumping into harder difficulties or Arcade mode. Me, personally, I’ve played enough Damsel and will happily lay it to rest now. I haven’t been this frustrated with a game in a while and unfortunately more often than not I didn’t feel like it was my fault which is a bad sign. Still, if you are a fan of the more challenging time based platformers and enjoy a more complex scoring system then Damsel may well prove to be up your street.

For me it has some good ideas and mechanics but the levels don’t flow which for a game so focused on combos and times is a real shame.

Damsel
5 Overall
Pros
+ Some cool risk vs reward mechanics
+ I like the visual style
+ Some good leaderboard chasing to be had
Cons
- Screen is too busy to read at speed
- Controls aren't as perfect as this style of game requires
- Levels don't flow
Summary
Damsel is a score chasing, timed, tough platformer with lots of mechanics. Some are good, some not so much, but the nicely animated but difficult to read visuals and level design make what should be a fast paced experience into one that doesn't flow.