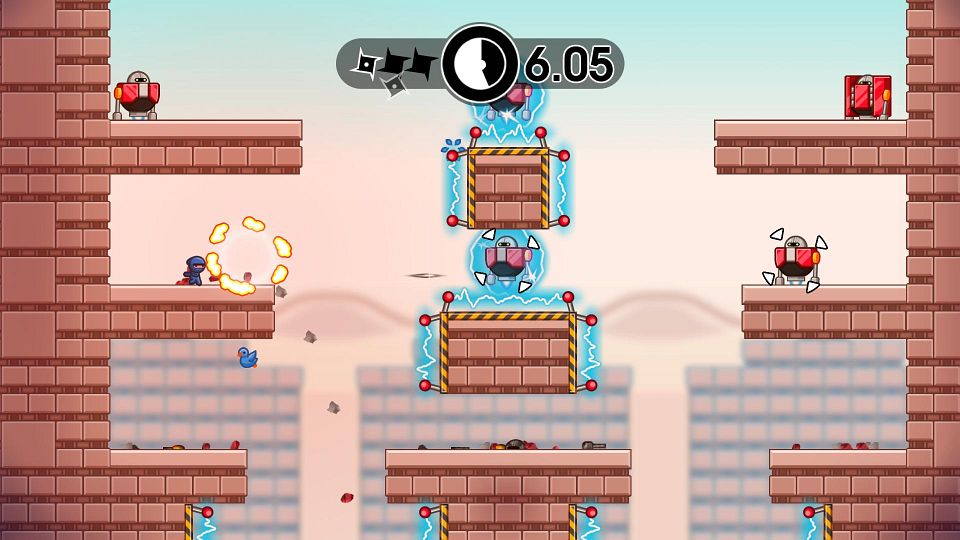 10 Second Ninja X is a 2D puzzle platformer from Four Circle Interactive. 10 Second Ninja was released on the PC and this X version contains new levels as well as the originals and is available now on the PS4. More content is nice but is the game fun enough to bother? 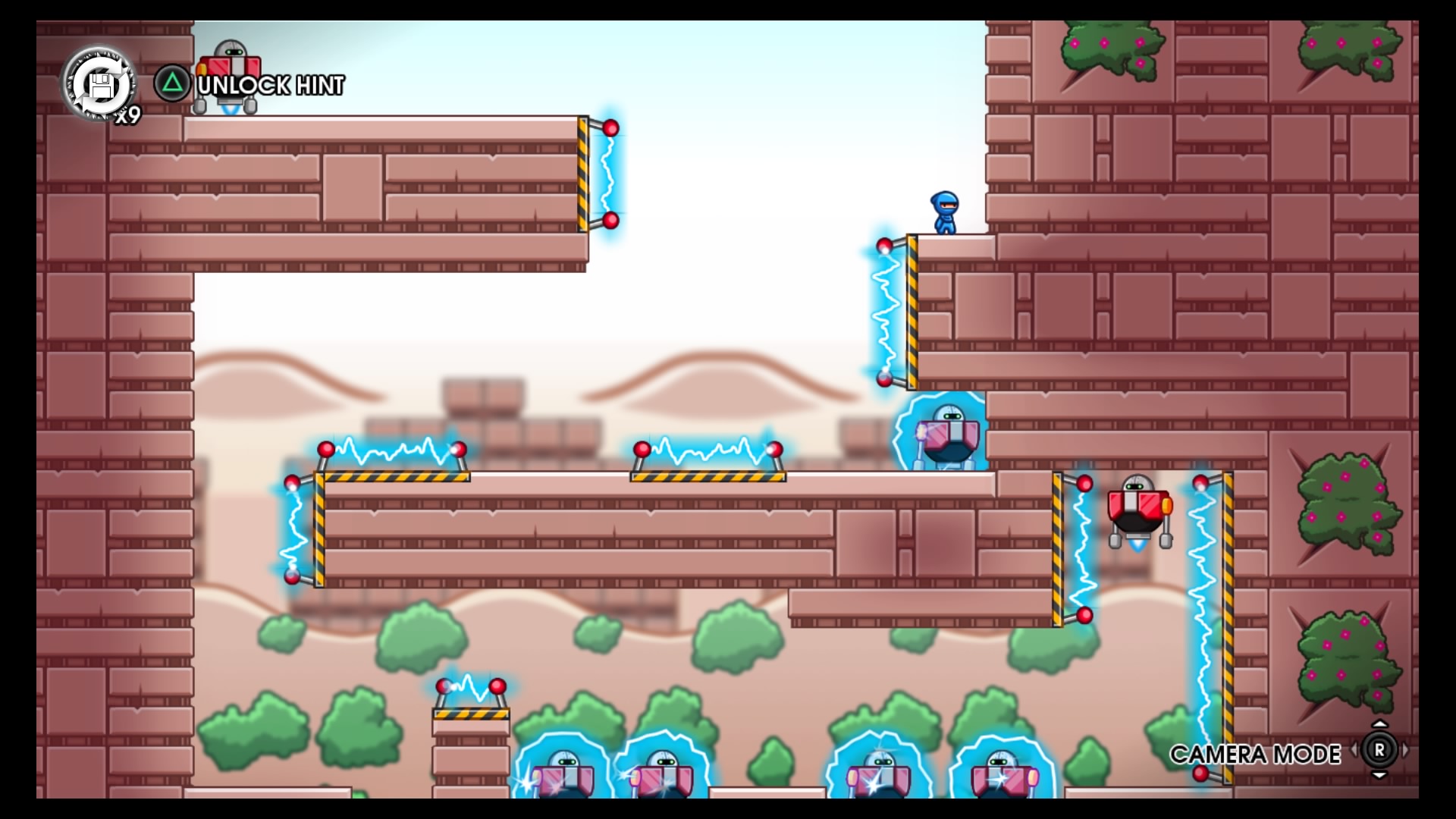 As the title suggests the gimmick with 10 Second Ninja X is that you have a ten second limit to complete each level. In actual fact the ten second limit never really comes into it as you are rated up to three stars based on how quickly you finish the level so you should never be anywhere near the ten second limit. Most can be completed in a few seconds.

You have one screen full of robots and you must destroy all the robots to complete the level. Sometimes the level is slightly larger than your screen but before a level begins you can use the right analogue stick to look around and plan your route.

You have some basic moves at your disposal as a ninja and you never learn any more. You jump and double jump, you can slash your sword and you can throw ninja stars which continue in a straight line past robots after destroying them, but you only have three per level. Such a simple move set is vital as execution is incredibly important if you want to get the best times but planning is equally as important.

How you approach a level will be the difference between one, two or three stars. When you’re talking about fractions of a second execution can only take you so far, if you slash two enemies instead of using a single throwing star you’re wasting precious time. Do you run to the right to take out this enemy or follow the path up the level before dropping down onto this final robot? Being able to observe the level before you start is very important and if you mess up or don’t get the time you desire then a quick tap of R1 or L1 will reset the level instantly to let you try again.

There are six worlds to the initial set of levels and although your ninja never learns any new moves each world introduces new elements such as robots that can only be killed with throwing stars or barriers which your throwing stars bounce off of in preset directions. These twists keep things interesting as you master each new element. There are ten levels within each world and depending on your skill level and how many stars you’re aiming for you can get through them pretty quickly given patience and tenacity. Later stages are gated off based on how many stars you have so you’ll at least want to aim for two stars if not three. 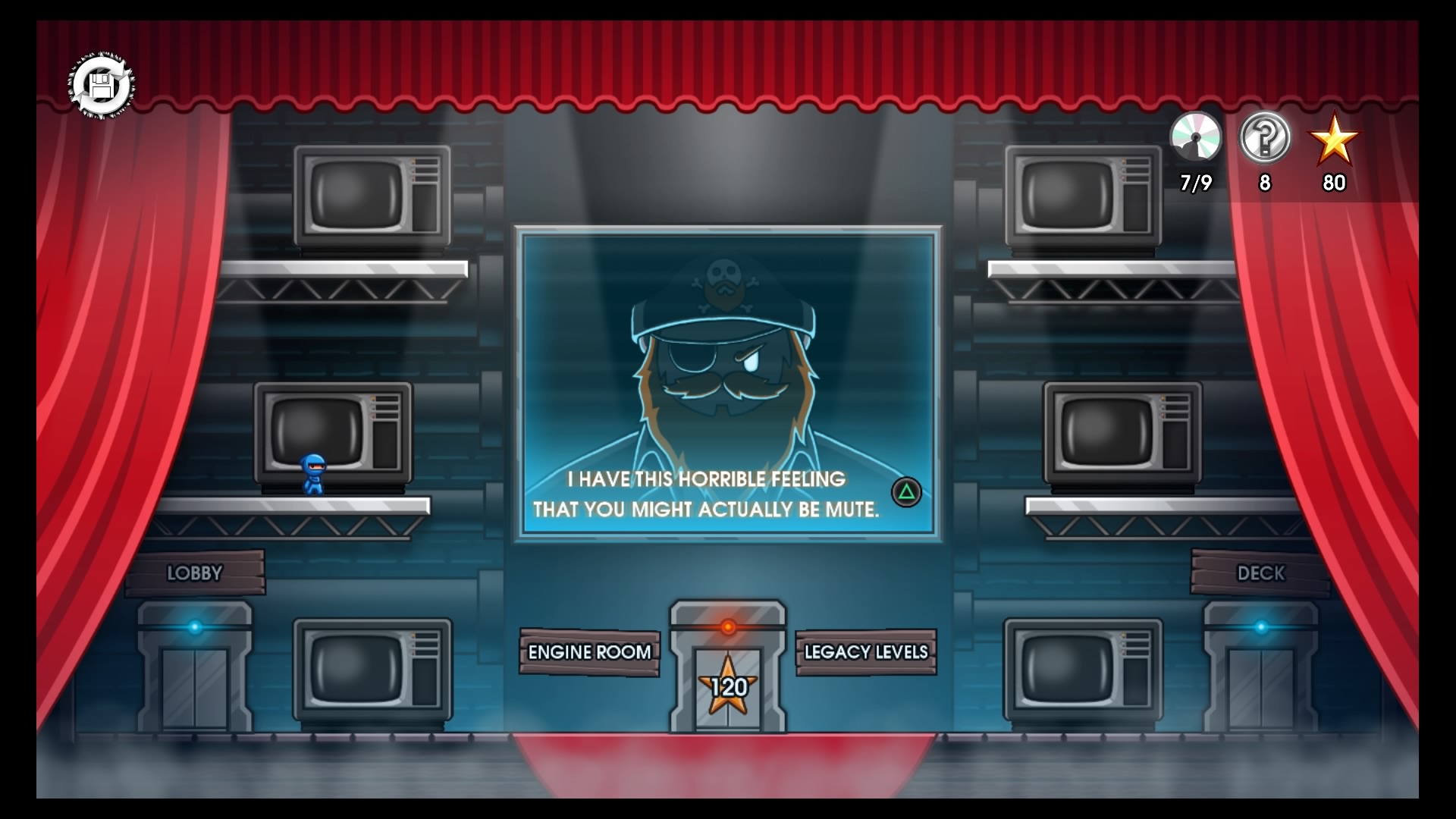 You can actually finish the story (yes, there’s a story) with 120 stars which could either be two stars on every level in the six initial worlds or three stars in the first four worlds. At the beginning of the game your ninja gets captured by Captain Greatbeard who wants to test how fast you really are. That’s the basic gist of it, though the writing is quite charming and it doesn’t take itself too seriously. Finishing the story before you’ve even completed all the initial levels is a little odd but not really an issue.

Outside of the levels there is a hub world to explore with NPCs that offer new costumes to change into, minigames to play and a few collectibles to find. It’s a minor distraction but it’s nice of the developers to put it in there in case you get bored of the standard levels.

Once you have enough stars you unlock the Legacy levels and Marathon levels. Legacy levels are the levels from the original release of 10 Second Ninja and are a little tighter on the timing requirements I feel. Marathon mode challenges you to complete all ten levels in a world in a row but then judges you on total time, deaths and so on. A great feature of this mode is that you can view your best run before you start so you don’t have to memorise every course to do well.

Each level has a leaderboard although they have been a little temperamental as to whether they load in or not for me. Also a little worrying is that twice the game has failed to save my progress. The first time I lost over half my stars (and trophies didn’t unlock) though I’d learned the levels at this point so it took maybe half an hour to catch up again, the second time I was aware of the problem and only lost a couple of levels. If the saving icon stays on screen and never fades out then the game is failing to save and you’re better off restarting the game and going from there. 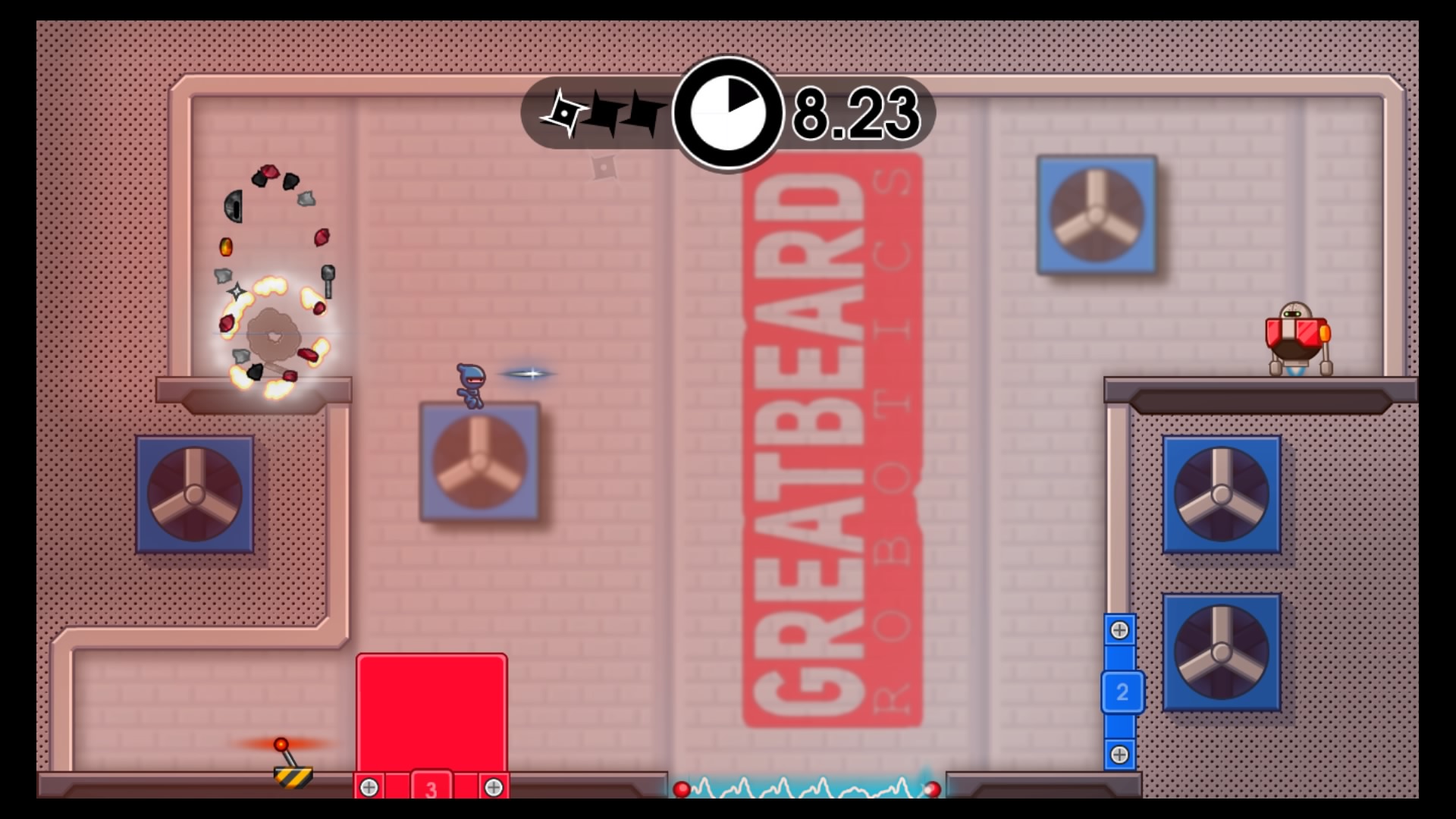 10 Second Ninja X is a fun game where the challenge is set just about right to make you understand and master the mechanics but not frustrate you. If you’re a fan of Super Meat Boy and games of that ilk then although not exactly the same this game will scratch that itch. If you’re not a fan I’m not sure 10 Second Ninja X does anything to change your mind.

10 Second Ninja X
8 Overall
Pros
+ Basic mechanics are sound
+ Interesting twist on the execution based platformer
Cons
- Game failing to save is poor
- If you don't find this type of game rewarding then this won't change your mind
Summary
10 Second Ninja X challenges you to three star every level, simply completing the levels isn't difficult but will limit your progress. If you're the type of player who loves precision platforming with a hint of puzzle solving then you're in for a treat.