Indie platformers are plentiful and it does seem a fair few chase a responsiveness and challenge that I’m not always up to. Two Parsecs from Earth is a rather more bitesize effort, coming from ABX Game Studios. Whilst it does have some interesting ideas about progression and a fairly focused approach, some aspects feel a little undercooked. 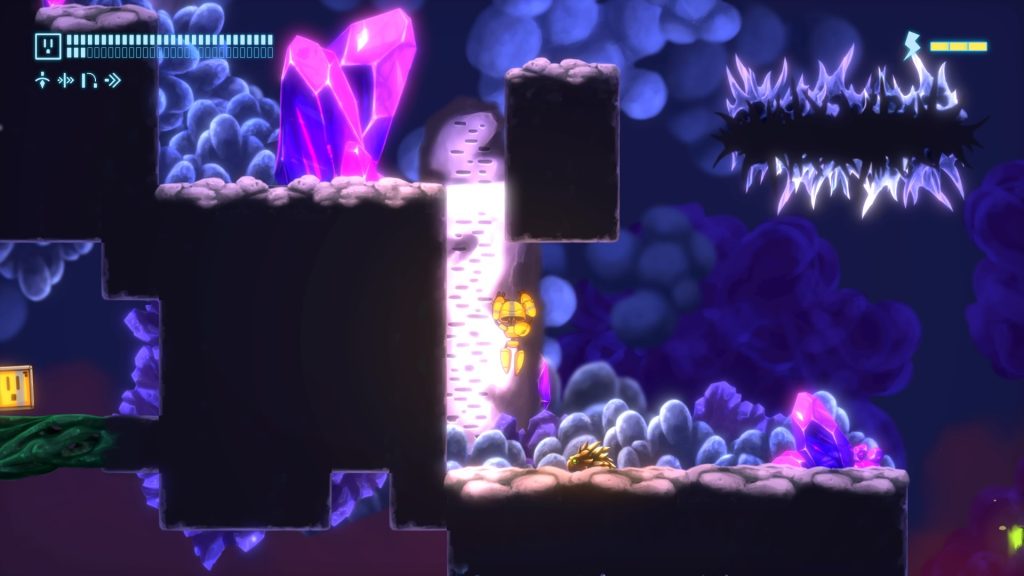 Truth be told, there’s not a lot of story to Two Parsecs from Earth. You play as an intelligent alien robot who crash lands their ship on a planet’s surface. Your sole objective is to recover your cargo, find batteries to repair the ship and clear off. That’s the entirety of the plot which is delivered to you short cutscenes that book-end the experience. It’s a very basic premise and, despite your robot’s sarcastic demeanour, he stays silent for most of the journey.

Whilst a little more chatter would’ve been nice, you get the sense ABX Game Studios were trying to make a very focused product. The gameplay follows suit with a tight platformer around a labyrinthine planet. To start with, you have no movement abilities. You can traverse ladders but need to be careful where you step with plenty of spike traps and enemies roaming the levels. One hit will kill you so part of the challenge is steering clear of trouble.

You gain your basic jump for free but the subsequent upgrades are all dealt with under a compromise. When you reach an upgrade station, you’re handed a choice of two abilities. They all refer to traversal but in very different ways. For example, your first choice is between a double-jump and a dash. With your cargo scattered all over the planet, your decisions will ultimately dictate which ones you can retrieve. 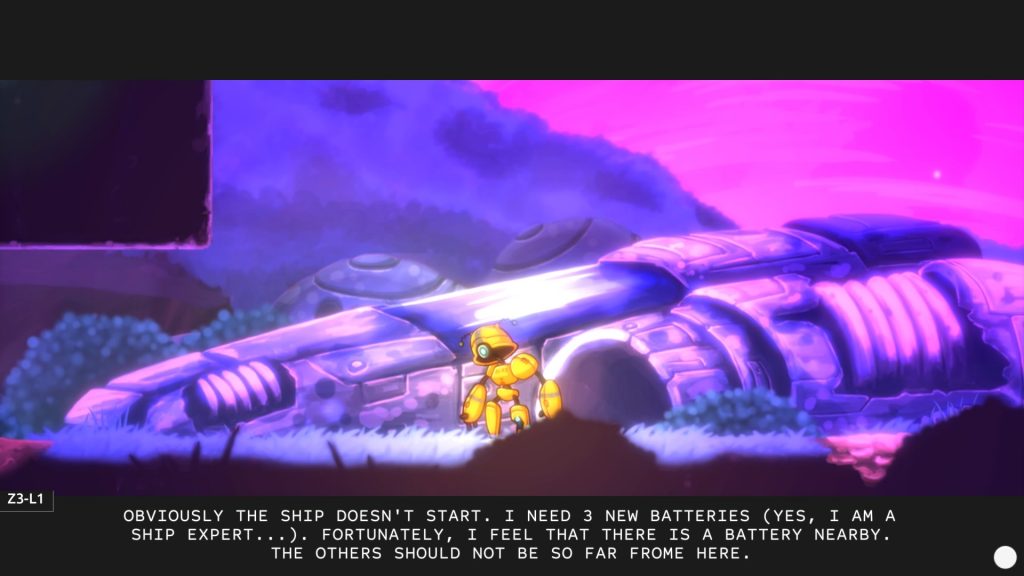 It’s a credit to the level design that these choices matter. There’s fifty collectables to gather and the nature of the upgrades means you can’t grab them all on the first run. I don’t think I’ve seen any ways to circumvent or cheese your way to packages you shouldn’t ordinarily get to. They all seem to have very clear, specific routes to them so you are relying on your execution to succeed.

At times, this can lead to frustration. The jumping and abilities are tight, although maybe not as tight as I would like. Platforms and obstacles can have very exact spacing which leads to you really having to understand the distance of your available abilities. Areas will usually have as many as five pieces of cargo to find but with some inevitably blocked by things you can’t traverse.

Your map comes in handy, although it doesn’t unlock immediately. Whilst it initially looks fairly open, the route from one screen to the next is relatively linear. Whilst the map does point out which area you’re in, it doesn’t point our your exact position. It’s a minor complaint but it did lead to me looking at the blocky layout of the level to decipher just where I was. The map does fill out to do a decent job of telling you what you’ve collected and what remains missing. Upgrade stations and the position of your crashed ship give you clear indications of where to go next. 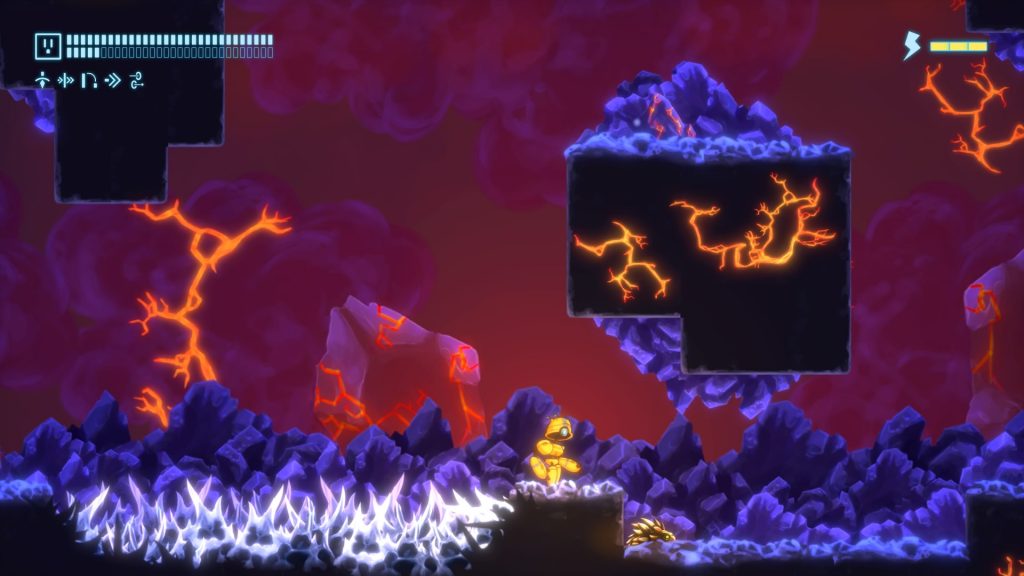 Visually, each area has a different palette or motif. Just enough to distinguish one area from the next, it does present most obstacles and enemies simply and cleanly. Geographically, it’s a very blocky planet that would look at home on graph paper. Whilst it’s not very technical, it does carry a colourful look. Your robot moves well and his deaths are nicely animated.

Death is something I happened upon often. The game is very quick to restart you and any punishment is usually doled out with some lost progress. Whilst abilities will lock you out of some cargo, there are areas specifically crafted for the game’s six upgrades. These areas look like the game’s more tougher challenges. They are designed almost like gauntlets with handful of cargo to grab before you leave the area. You can force an autosave by leaving areas and coming back but, should you tackle a few cargo and die before making the exit, you’ll have to retrace those steps.

Initially, I found that to be a real frustration. In the latter stages where I need just a few cargo, I found myself playing it safe. Once I’d secured a batch, I’d retreat to another screen and then go back for the rest. Death is ultimately, a minor inconvenience. There are challenges that have to be tackled as a whole. Finding batteries teleports you to a separate area which sees you chased by a giant insect. 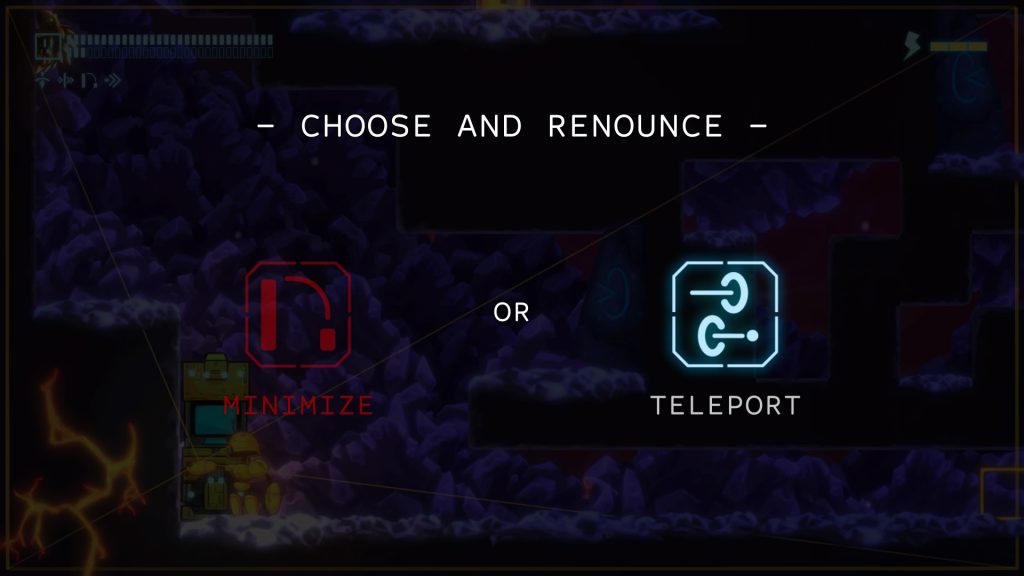 I wouldn’t call this chase especially difficult but it does require memory and precision on your part to succeed. These interludes deliver a rare shot of tension, even if it does devolve into trial and error. On the one hand, it’s full of splendidly created platforming scenarios. On the other, it doesn’t give you a lot of room to experiment. Whilst New Game + allows you to pick up your remaining upgrades, the tightly considered design of the levels mean the abilities act more as keys towards cargo.

Whilst it mostly executes on it’s focused premise, it doesn’t offer many thrills beyond that. The platforming might be tight but the puzzles themselves feel firmly rigid and there’s not much on the periphery to dig into. What I really lack here is any sense of flow. Maybe it’s the tight corridors of the level that stifle it.  Compromising the player with the power-ups is an interesting choice but it doesn’t really pay dividends.

Two Parsecs From Earth
6 Overall
Pros
+ Very focused level design that leads to some very specific challenges.
+ Forcing the player to choose a power-up is an interesting choice.
+ A very bright, colourful aesthetic.
+ Controls are fairly responsive.
Cons
- Traversal lacks a real sense of flow, owing to the tight level geometry.
- Story is very light and your robot's chatter quickly vanishes.
- Sound feels understated and lacks some atmosphere.
Summary
Two Parsecs from Earth is a fairly considered, focused platformer with some precise controls. At times, it's not as responsive as you want but the cold sting of death becomes a mere minor inconvenience. Whilst the levels are smartly designed, it does lead to some exact and rigid challenges that hone in more on trial and error. At times, I felt constrained and it's hard for me to get a good flow going. It has a colourful aesthetic but there's very few moments of character here.