From Bristol-based indie developer The Polygon Loft and publisher Apriori Digital comes Double Pug Switch. The elevator pitch is an auto-runner with pugs.

However, there’s a bit more to it than that. You’re a pug in a laboratory. All is well until an accident involving a fellow occupant of the lab, Whiskers the cat. Yeah, we know they’re asking for trouble with these animals about the place, but hey. Whiskers does what cats do in terms of being a dick. He knocks over a bunch of chemicals that cause a tear in the space time continuum. Because of course he did. At any rate, it’s the setup for Double Pug Switch. 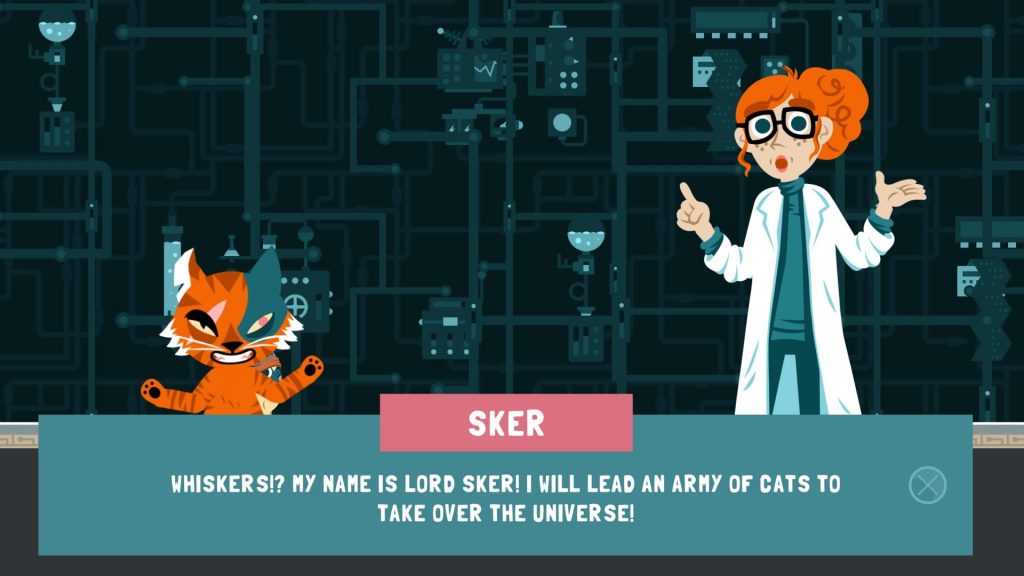 In practice this means that you can switch between two dimensions as your pug is caught in a state of flux between them. Tap

and you’ll switch between them. Only your pug is different in each of the dimensions.

The auto-runner aspect is you negotiating obstacle courses until you inevitably impale yourself on a spike or fall to your death. It’s going to happen. You’ll die over and over. Thankfully in our case, we got into a sort of groove and even if we had a level where we died repeatedly, we got through with perseverance. 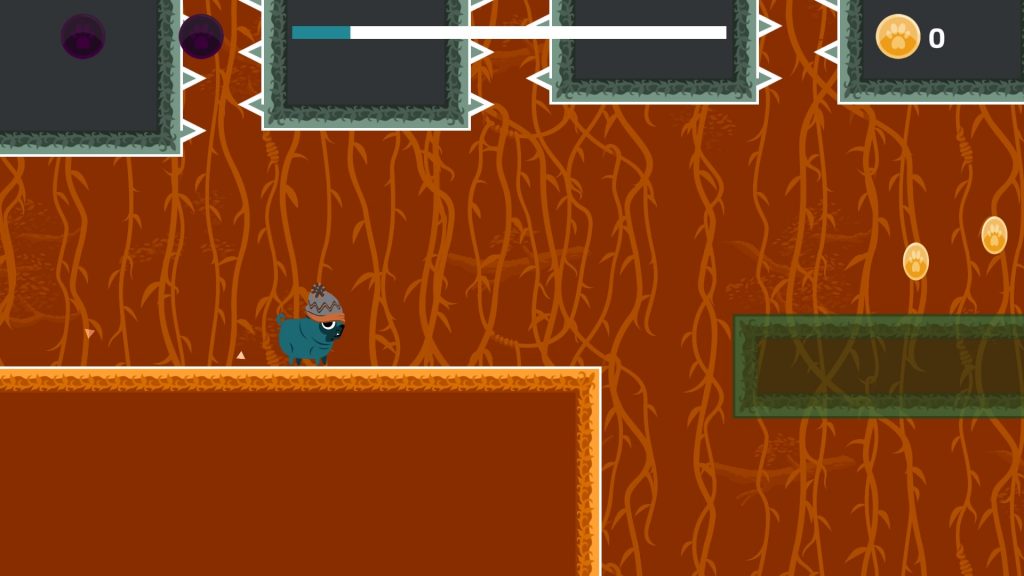 The dimension hopping aspect comes into play when you encounter the mechanic where platforms are only available in one dimension or the other. In some fiendish level designs, you’ll find yourself jumping from one dimension to the other in quick succession.

At the end of the first set of levels, you’ll encounter Whiskers who, of course, has become even more evil. You’ll get past him without much trouble, certainly not compared to any of the levels you’ll already have conquered. 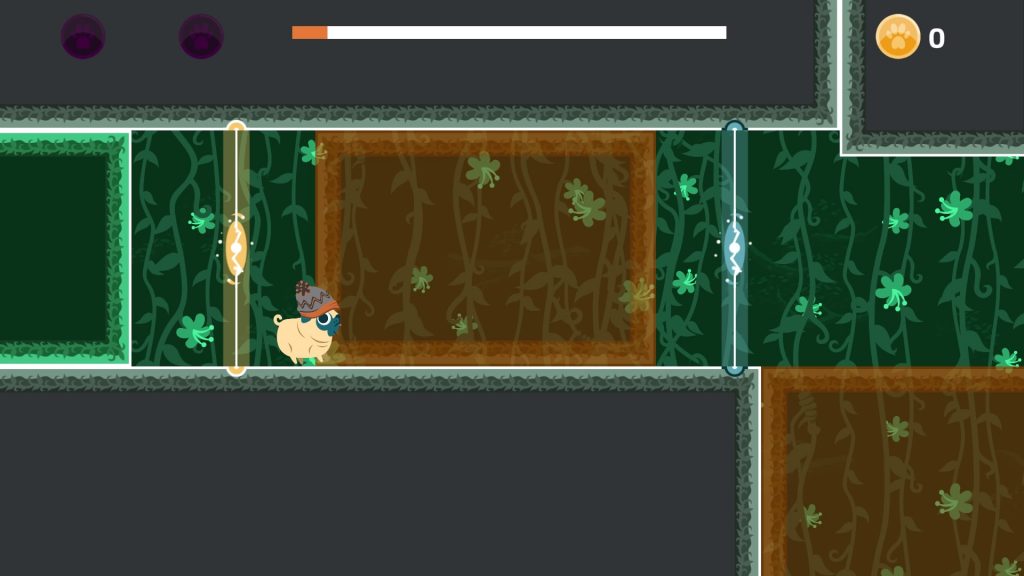 It all started to unravel a little after this. You may prevail in the level we stalled on repeatedly, but we expect you’ll hit a brick wall after a while. Try as we might, we couldn’t get past  the level in question. Heck, we didn’t even reach the first checkpoint.

This sort of roadblock is pretty much a given in this sort of game, but when we couldn’t get into the zen state that helped us in other tricky levels, we knew we were done. 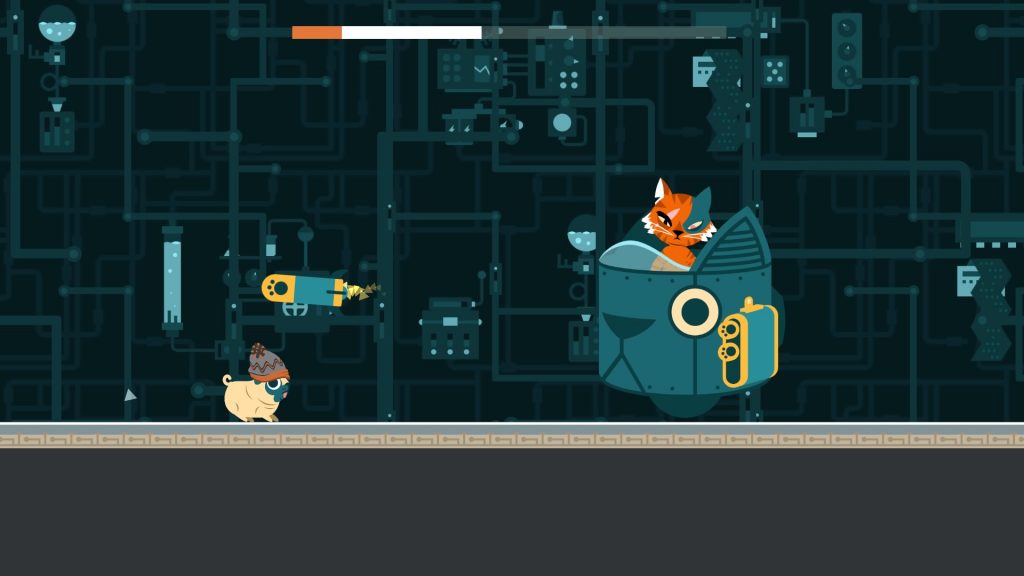 That said, the pugs are cute as heck, just as the music is catchy. But even these lose their novelty after the umpteenth death on a level you can’t get past. Eventually all the goodwill in the world won’t get you past. It’s not like an alternative route presents itself as it does in some of the other levels. At least there you can choose the path less challenging, but in the case of the level we stalled on, we don’t have that option unfortunately.

In conclusion, Double Pug Switch at its best is a wonderful autorunner-cum-puzzler. But at it’s worst its fierce challenge may prove repellent to some, ourselves included.

Double Pug Switch
7 Overall
Pros
+ Intelligent design and mechanics
+ The better levels have multiple paths
+ When you get into a rhythm it's great
+ Catchy hummable music
Cons
- Some levels may prove a gauntlet too far
- Those levels without multiple options may prove too much
- Challenge is absurd at times
- Cats are pricks, we get it
Summary
Double Pug Switch is a fine auto-runner with some fun mechanics. We just hope for your sake you get further than the brick wall we found ourselves hitting.