Endzone is a city building strategy game from German gamesmiths Gentlymad Studios.  It debuted as a PC game in 2021 but is now here as a complete package, scooping up a couple of DLCs, on the PS5.

In this game you are tasked with the not insignificant task of restarting humanity following a global nuclear disaster.  The planet was rendered uninhabitable for a hundred years but now the radiation has cleared up enough for people to start living outside, albeit with plenty of residual radiation risk.  As a civilisation, people have the records of how things work but resources are tight and certain technologies are unavailable. 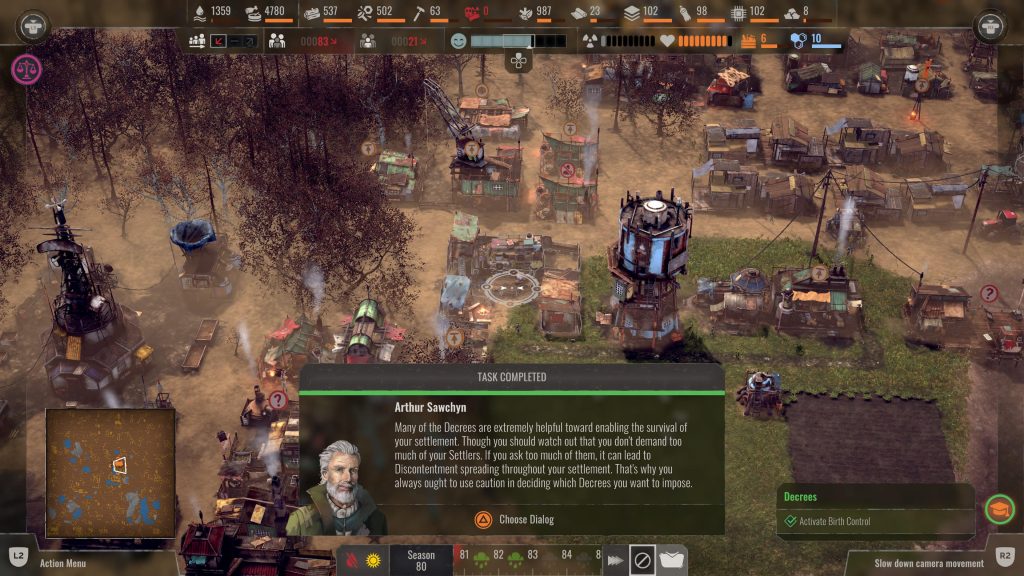 This is good though because it means you have to focus on the important stuff instead of worrying about making shopping centres, running bus and time schedules and all that stuff.  The post-nuclear setting limits the scope of the game a bit which is good.  After all, there are plenty of other city builders out there that’ll give you a more modern experience (although with inflation, shitty governments and Putin acting like a cock, this game’s setting could be quite relevant soon).

Endzone offers three main options for play.  There’s a tutorial, a survival mode and a selection of specific scenarios that add certain situations such as frequent droughts, increased dangers from raiding parties and so on.  You’ll want to start with the tutorial of course.  After all, city builders do have a sharp learning curve and this one is no different. 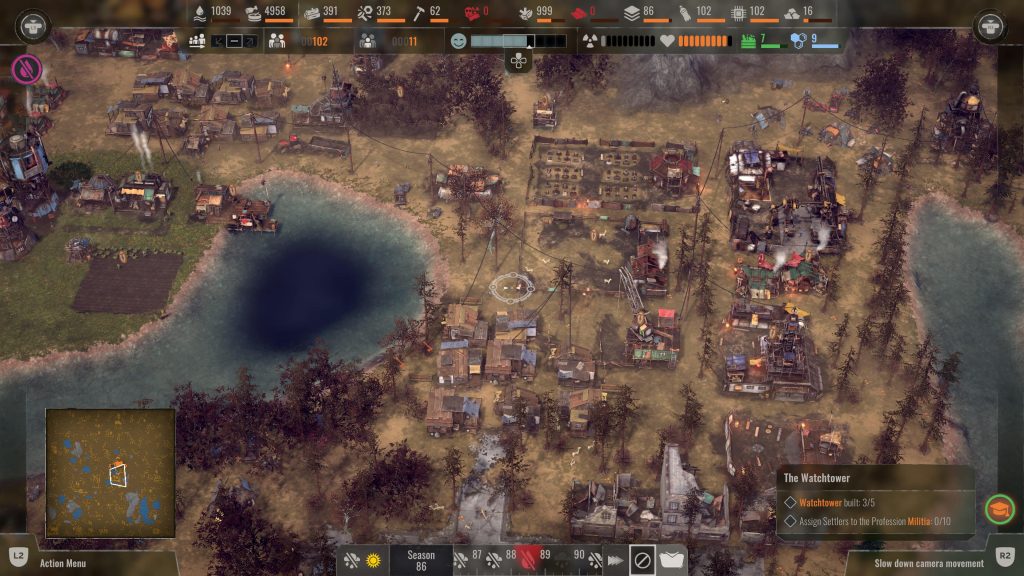 The tutorial is honestly a bit much.  It lasts for HOURS, methodically taking you through each building, settler job, resource and situation.  It’s ridiculous.  Our main knock on Aven Colony (another city builder) is that it held your hand too much, essentially telling you how to play it and this tutorial basically makes you play a whole game but telling you what to do every step of the way.  It also highlighted a couple of other issues.

The first is that there’s just so much to do.  I get that water is an important resource but there are NINE separate buildings all related to the collection and storage of water.  Similarly there are a dozen building sub-menus packed full of structures related to wood collection, clothing production, accommodation and so on.  It’s a bit exhaustive.  And although you can upgrade from one building to another, we’d prefer it if you had a more traditional system where you have one building that you upgrade rather than all these options. 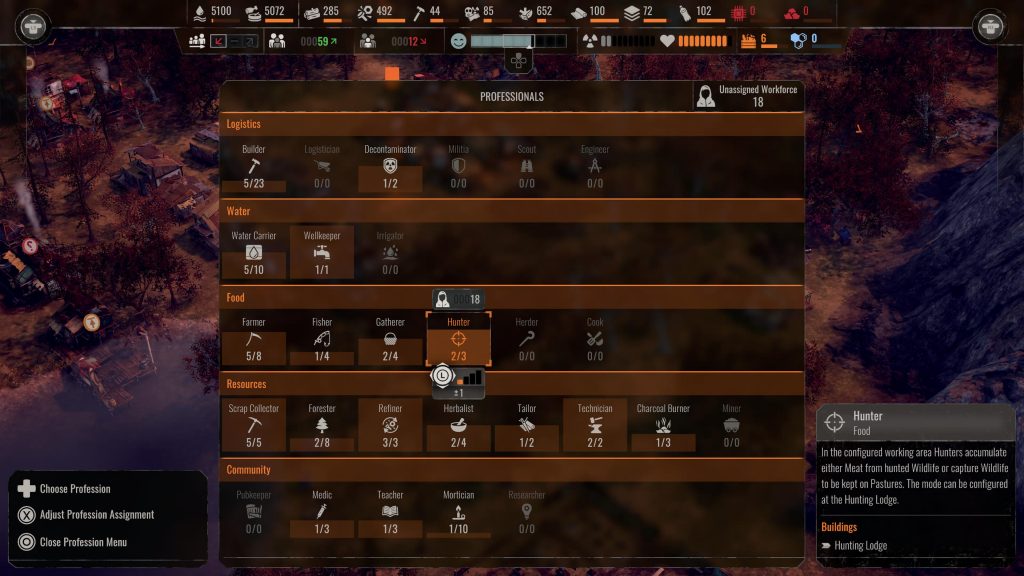 The other issue with the tutorial is that the game got stuck in the sub-menus at one point.  It hadn’t crashed, I could still navigate that menu a little but it essentially locked out control, making it impossible for me to continue playing.  When I restarted the game and continued, a lot of progress was lost.  Leading me to abandon the tutorial after two and a half hours.  That’s a bit unacceptable considering the time I’d invested.

However, it did lead me to playing the Survival Mode and this ended up being a vastly more enjoyable experience than the tutorial.  Here you can customise your game a bit, changing the frequency of droughts, dust storms and scavenger raids but most importantly it seemed to bypass the entire researching part of the game where you have to research new buildings and instead just had them all available.  You can’t build them until you’ve constructed other ones that give you specific resources, but it certainly did help that the game took at least one thing off of our list of things to manage. 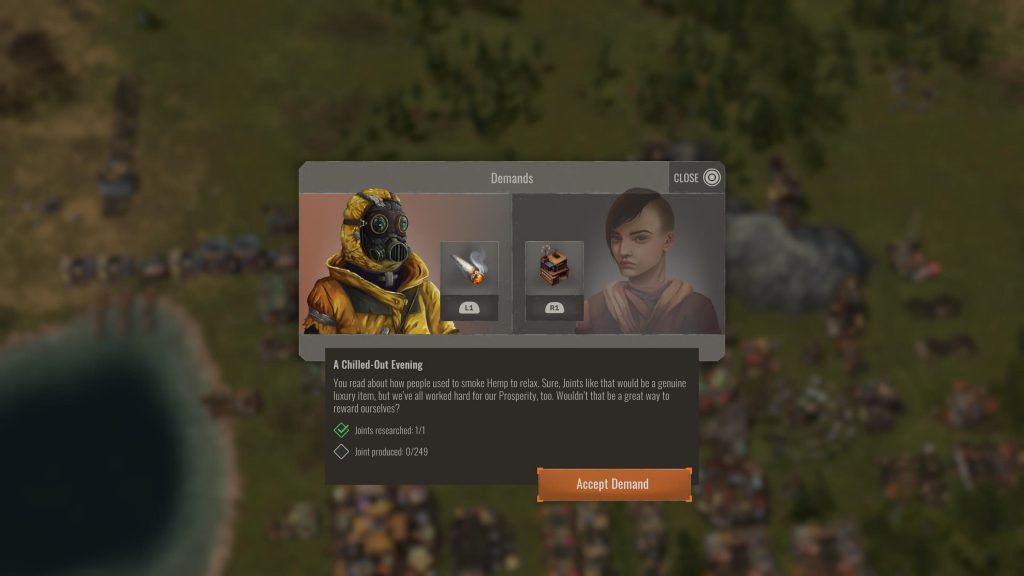 Learning our lessons from a pretty messy tutorial build, we set about making a much more ordered settlement with specific areas for water, food, housing and resource gathering.  That’s always our favourite thing with city builders, making everything well ordered.  But here it’s sort of a necessity as it can be very difficult identifying your buildings so if you want to tell your tailor to start producing masks instead of scarves, finding them can be a nightmare.  So having zones for everything is the smart play.

As you play, you’ll need to make sure you’re getting the right resources, collecting enough food and water, ensure a bit of variety in people’s diets, decontaminate resources, provide housing, establish education and so on.  And that’s really the game, grow your colony and keep them alive.  Allocate jobs so that everything works efficiently. 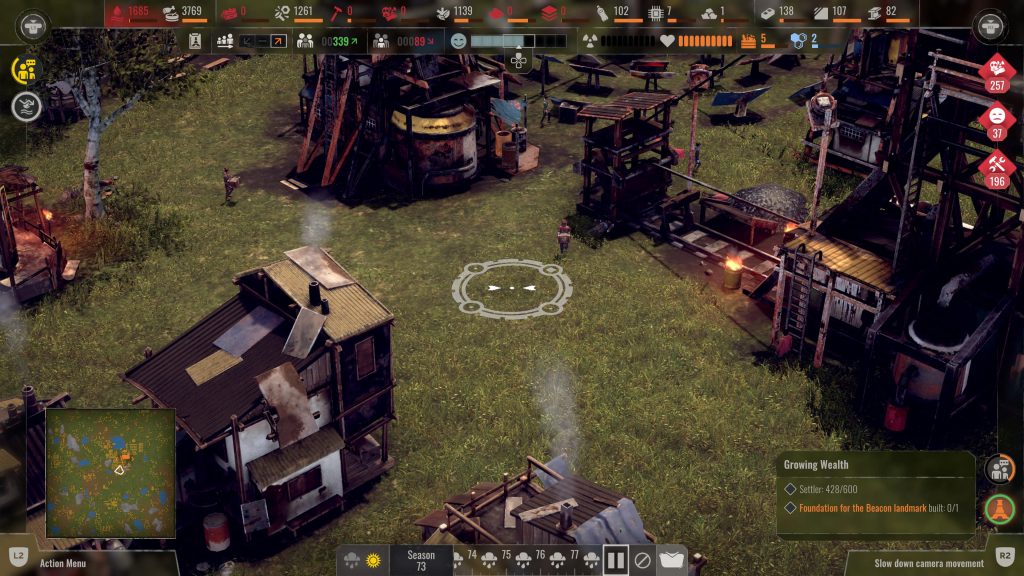 In our first survival run, we tried to do too much and ran out of water after nine seasons, condemning everyone to a peasant’s death.  However, our next go was a lot better as we took our time, doing our best to methodically build a functional and well-ordered settlement and when you’re doing that, Endzone actually feels pretty good to play.  These sort of things work best on PC of course but this game does have a pretty good control system.  It takes a bit of getting used to but ultimately after an hour or so we felt confident with it.

The main problem with the game is that we’ve played this sort of thing quite a few times.  Cities and Sim City offer a more complete experience, Aven Colony was prettier, Islanders was more compelling, and Civilisation did the combat thing a lot better (although to be fair that’s not a big part of this game at all, although it is one of the weaker aspects as you can’t even see the attacking units).   The scenarios help to give the game purpose but it’s never quite as dramatic as Frostpunk (which tells you that after a while you’ll be plunged into fatally low temperatures) or They Are Billions (which ends with a huge zombie rush). 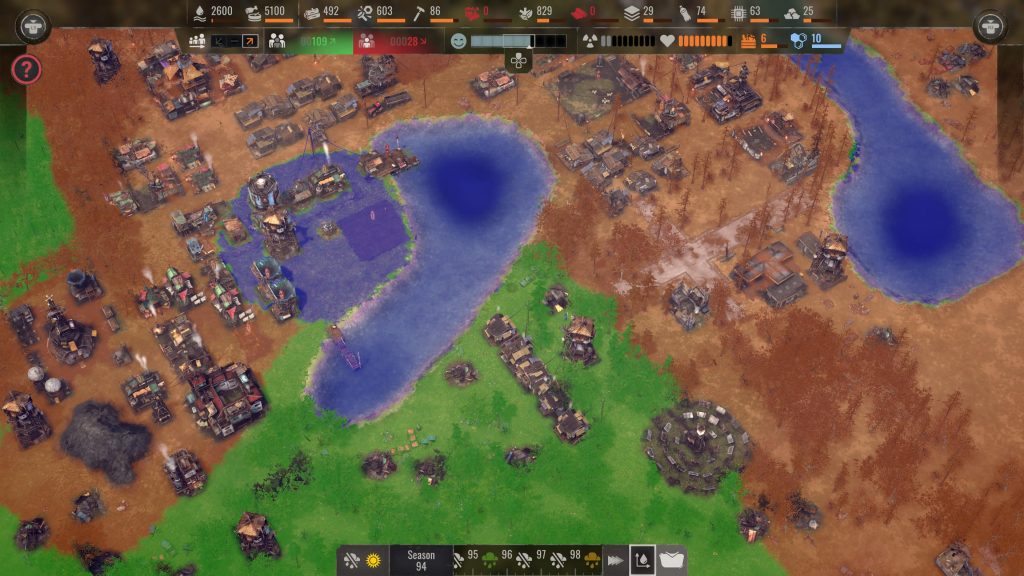 However, if you want a more chilled experience, Endzone is pretty good.  It helps that the music is fantastic and really enhances the game just by being good.  Visually things are okay.  The game has a bit of a ‘medium settings’ kind of feel with graphics that are a little rough around the edges and, as we said, figuring out what’s what in the game can be a little tricky.  The game does let you zoom in and out but there’s not much reason to go in too close as it doesn’t really stand up to close scrutiny.  Also, the art design is a little drab but that’s to be expected of the setting.  Frostpunk managed to look a lot nicer though and that’s set exclusively in the snow.

Performance is a bit of an issue too.  We had that initial tutorial-ruining bug and, while that never reappeared, we did have a few scares where the game appeared to get stuck or just a bit jammed up until it popped back into life.  But for the most part it held up and we did enjoy our time with the game.  It’s not one that’ll do anything particularly new or exciting and indeed most of the time when anything happens it’s just the game pissing on your chips a bit by drying up your lakes or covering everything in dust.  They definitely could have upped the drama here but that does all play into the game being best when you reduce some of the threats and just treat it as a chilled out resource management game and it does that pretty well.

Summary
Endzone is a deep city builder that works best when you relax with it in survival mode. If you can stomach the ridiculously long tutorial, middling presentation and technical shortcomings, this is an enjoyable game but there are a few better options in this genre on PSN to consider first.