We’ve been championing 10TonsLtd for a long time now.  The Finnish developer/publisher has put out some of our favourite rogue-lites, namely Jydge, Tesla vs. Lovecraft and Neonchrome.  And now it’s time for Dysmantle, a game that eschews the whole rogue thing and is instead described, somewhat incorrectly, as an open-world RPG.  Quick how you’d categorise it however, is somewhat tricky.

Dysmantle is a mix of crafting in the Terraria/Minecraft mode but with better visuals and zombie-based survival horror.  It is set in an open-world as described and has the questing and upgrading of an RPG but there’s this whole other aspect to the game which, as the title suggests, is that you need to destroy everything. 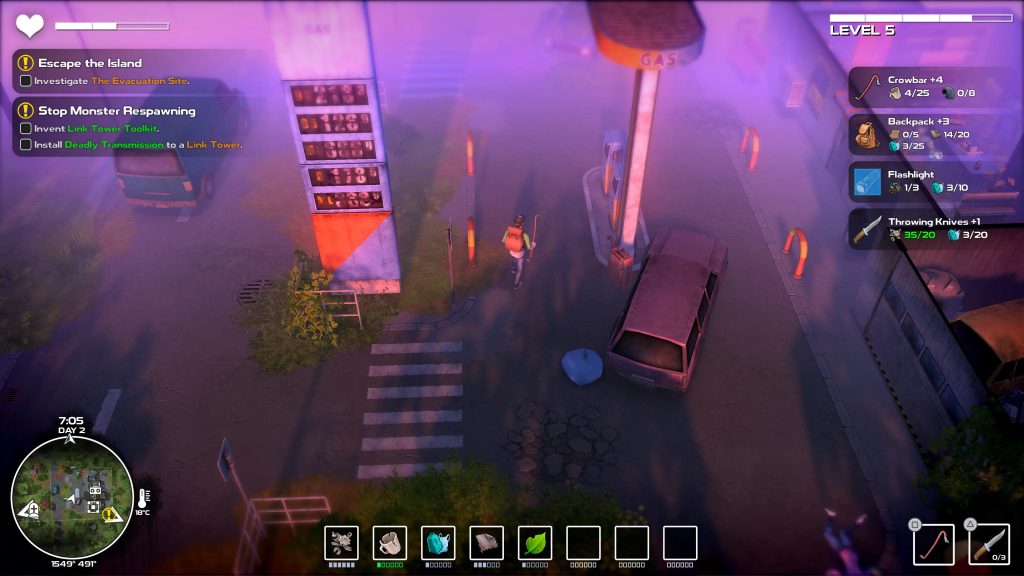 Initially it’s quite a simple premise.  You’ve got a crowbar and you’re on a large island full of ‘stuff’ such as houses, vehicles, trees, fences and so on.  You’ll need resources and these come from destroying all those things.  A chair might give you fabric, a fence will give you scrap wood, railings will give you metal, smashing crockery will give you ceramic material and so on.  There are a lot of objects and a lot of materials to collect.  These can then be used to upgrade your existing gear or, more importantly, create new equipment.

Equipment is split into several categories.  You’ve got clothing to protect you from damage and the elements (the game has snow and desert areas), tools such as the weapons (baseball bat, machete) and things like spades, hoes and building equipment and trinkets that offer different buffs.  You’ll can only equip a small number of each though so managing your current inventory is a big part of the game. 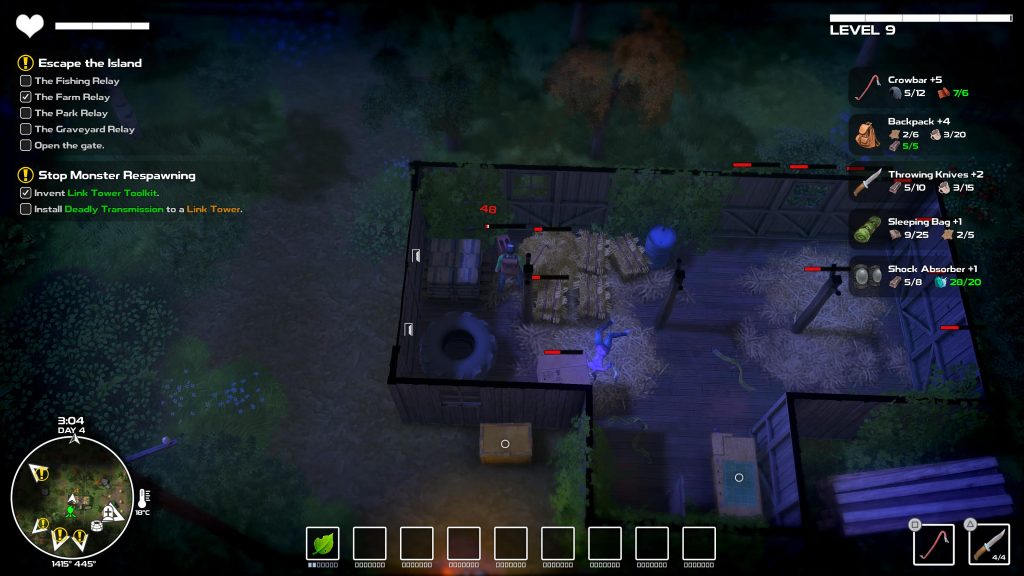 Of course, with games like this it becomes about getting the next thing.  For a while all my upgrades and new gear seemed to need lumber or titanium, items that aren’t dropped by defeated foes.  It turns out you need a sawmill and smelter for those things but once you get that next bit of kit, you can go back to old areas and smash up the previously indestructible stuff there.  There’s something pretty satisfying about that.

Dysmantle truly does let you destroy almost everything.  It’s quite a clever system but it works and they’ve cleverly worked out a way to make even basic materials useful later on it the game.  That said, it might seem a bit strange that you spend so much of this game hitting walls and furniture until it falls apart.  What you need to do is approach the game with the right mindset really.  This is a long game but one that you can dip in and out of.  The story is told through radio broadcasts mainly and is pretty easy to ignore so you can afford to take breaks.  You’ll need to anyway because this game is long. 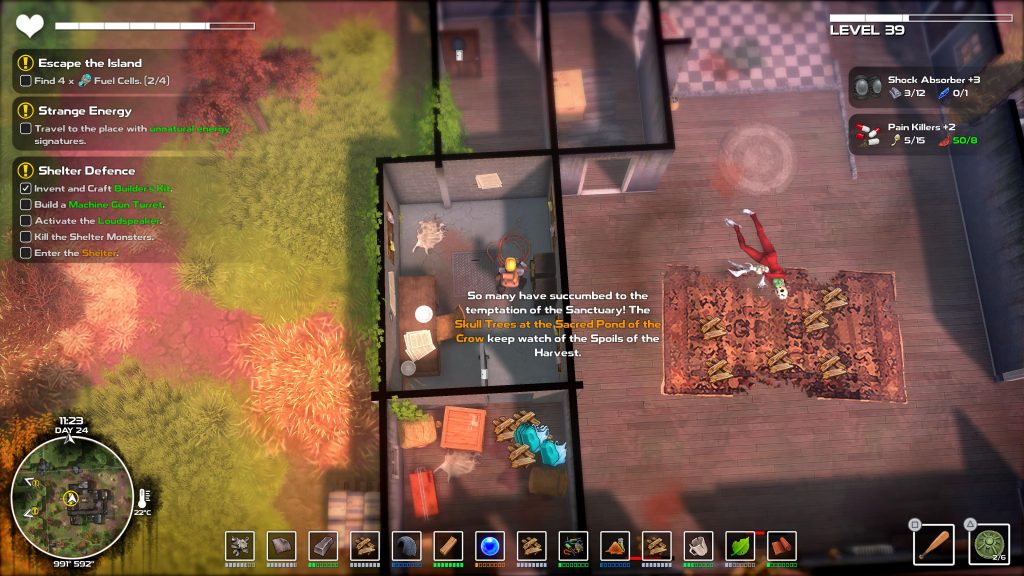 Although there is a (fairly limited) fast travel system in place, the game area is big and sometimes getting stuff done just takes time and boy is Dysmantle a bit of a time sink.  The path to your next objective is often blocked by a locked security gate or a broken bridge and so you often have to try to figure out a way around and that all takes time.  As does smashing up an entire town because you’ve just unlocked a sledgehammer or whatever.  But somehow it’s never boring.  It’s oddly chill, in the same way that Minecraft or Terraria are, even when monsters are eating your face.  This is just one of those games that you can relax with, like a city-builder game except this time you’re doing it in reverse.

That said, the game does throw in new enemies and some taxing boss battles now and again to keep things interesting and these break things up very nicely.  Because of all the gear you end up collecting, there is actually scope for unique tactics.  For example, I found myself dropping landmines strategically and using knives and grenades on bosses.   And if that doesn’t work maybe there’s a bit of headgear or a trinket that’ll make the difference. 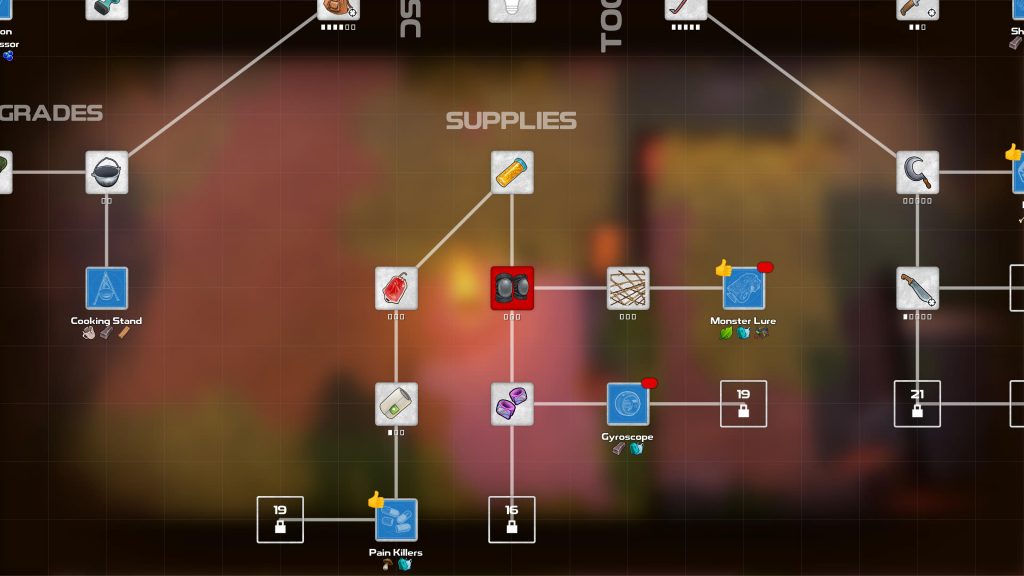 There are niggles too though.  The inventory management can be a bit of a faff.  When you’ve got ten good trinkets but can only equip five, that’s a pain in the arse.  As is using the d-pad to cycle through them and your tools on the fly.  This might have been easier on the PC perhaps but can be an annoyance on consoles.  And yeah, it’s arguably a bit longer than it needs to be (although we did appreciate the game adding new threats along the way).  But overall we really loved the gameplay here.

Visually the game does well to look alright while having to manage the destroyed/not-destroyed status of thousands of bits of environment.  It looks good, the action is clear and you can rotate and tilt the camera manually which is a real help.  The environments are detailed and reasonably varied, the enemies are easy to differentiate by type and it all looks quite polished for a crafting game.  There’s no Minecraft blockiness or Terraria flatness here.  The sound is alright too with music throughout and voice acting where needed. 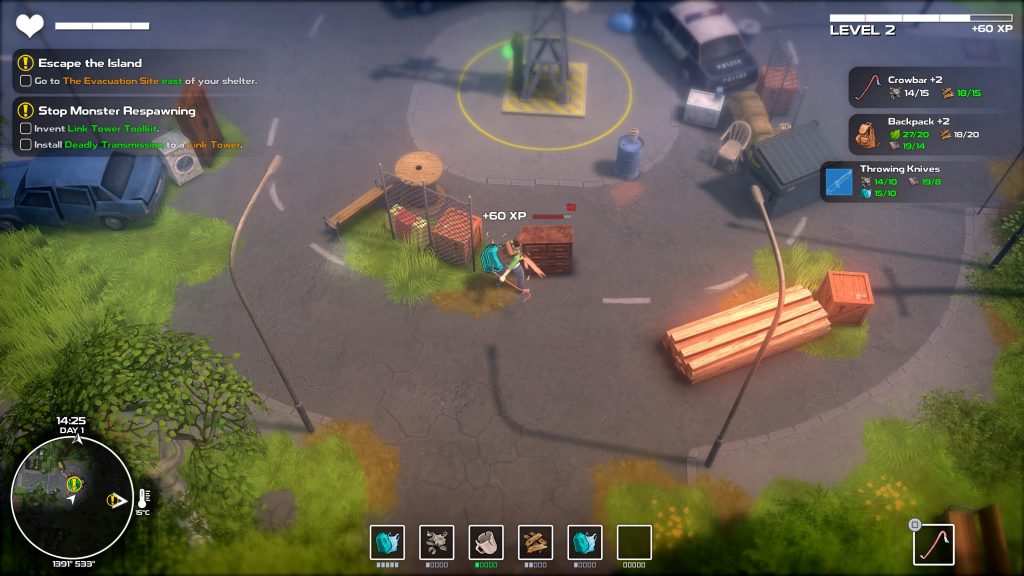 For us as huge fans of 10TonsLtd, we’re pleased to see them try something different.  They’ve always had such a great way with upgrading mechanics and really are the masters of cultivating addictiveness in their games and Dysmantle shows that while maintaining the quality and inventiveness that the publisher is known for.  We could probably write another thousand words about the various in-game systems, quests and bits of equipment but the joy of the game is seeing what it has next for you.

So if you want a game that can be your new go to game when you just want to chill, Dysmantle is very easy to recommend.  It’ll last you absolutely ages without feeling like a slog (although we do recommend spacing it out a bit and not mainlining it for, say, a review or anything!) and it’s got enough of its own ideas to stand alone in a field of zombie survival games.

Dysmantle
9 Overall
Pros
+ Great upgrading
+ Super addictive
+ Fun and relaxing without being dull
+ Boss battles are enjoyable
+ Well-presented
+ Lots to discover
Cons
- Interface can be a little bit of a faff
- An absolute time sink
- Inventory space is bit limiting
Summary
Dysmantle does everything you expect a good zombie survival game to do and more. It's a huge game filled with great ideas and is more addictive than chocolate-covered brain slices. Dysmantle is great.