Beneath a Steel Sky is a classic point and click adventure, but I’ve not played it. I do own it on Steam but when I saw Beyond a Steel Sky was made by Revolution Software as a big Broken Sword fan back in the day I had to check it out. 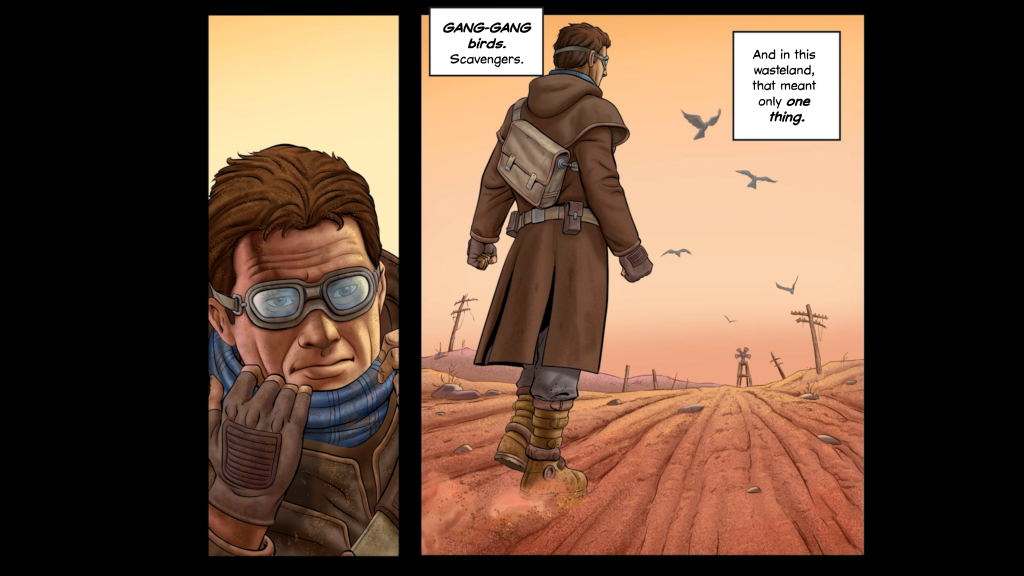 Beyond is a direct sequel to Beneath, following the story of Robert Foster. A comic book style intro shows Robert hanging out with a tribe in the Gap one last time before moving on. He goes fishing with a friend and his friend’s son but the son is kidnapped and taken away in a giant, four legged vehicle. Robert being the resourceful man that he is follows the tracks which leads him back to where his first adventure took place, Union City. He’ll meet old acquaintances and discover just how much has changed in his time away.

Its roots are in the point and click adventure genre but you don’t control a cursor here. You control Robert directly and as you approach things and point the camera in their direction they’ll highlight much as they would have in the old style. Press

on the item and your options will pop up. Usually this will be to inspect or interact with the object or, if it’s an option then you can use an item from your inventory. When interacting with someone you get similar options but can choose to talk to them as well. 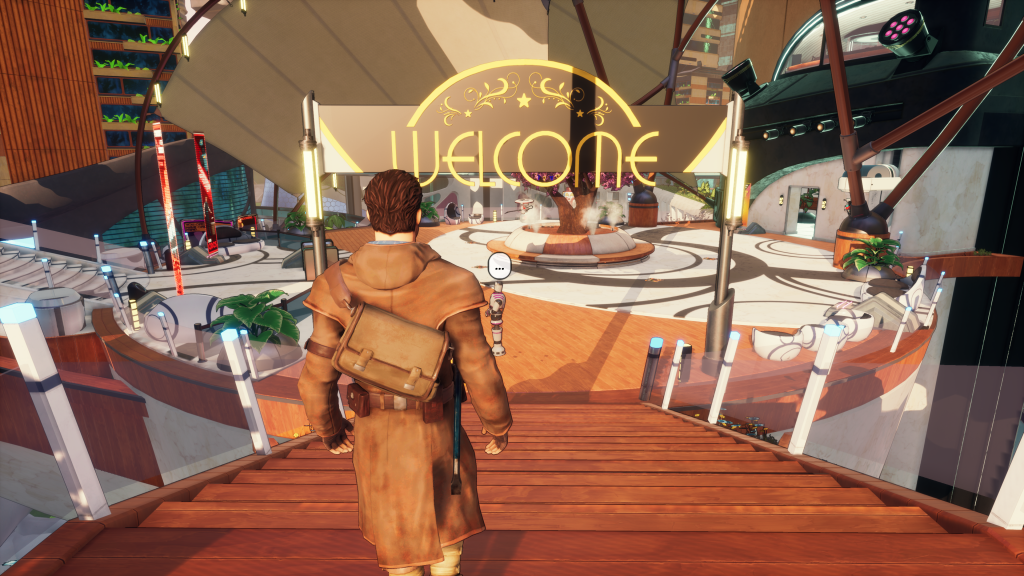 This works well. It’s a slower paced game so it’s responsive enough but using items from your inventory can be a little clumsy as you scroll through them all. You never get a huge amount so it’s not a massive problem but there is probably a more streamlined approach. A window would probably do.

You’ll walk around reasonably sized environments and, much like a point and click game, see what you can interact with, pick up what you can and make a note of where you can use items for later when you’ve found the appropriate maguffin. There’s no item combining here so things don’t get too complicated in that regard but Robert does gain a hacking tool which can take some time to get your head around. 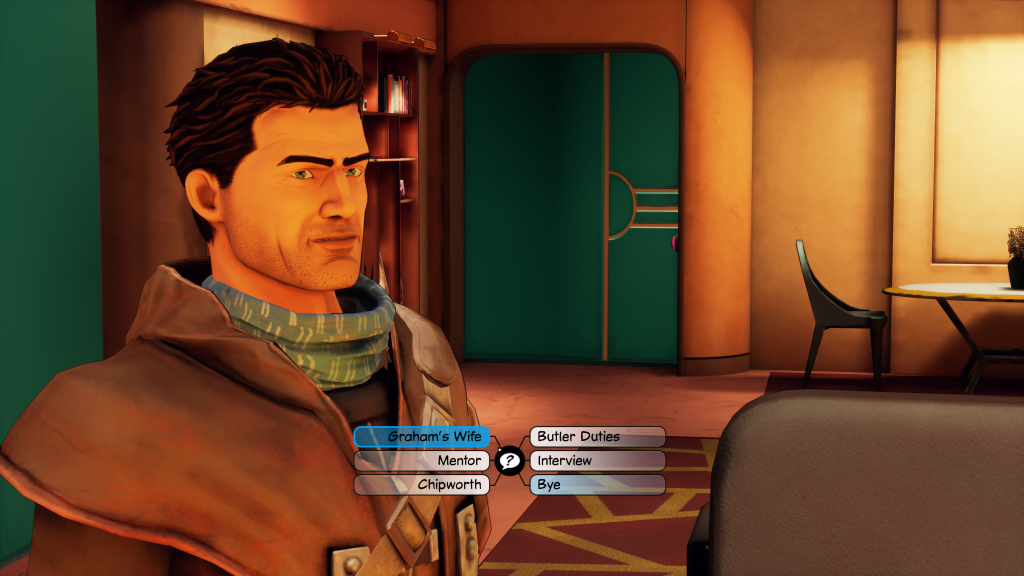 You’ll need to use items in the correct places in order to achieve whatever it is you’re trying to do at that moment. This could be accessing information through a broken screen or trying to gain a badge so you can access a certain area of a museum. There are even some straight up puzzles rather than using the right item in the spot at the right time, though these aren’t too common. What is common is the hacking however. Robert takes out his hacking tool and then as he walks around things he can interact with will highlight as they do normally.

When you interact with an item however the hacking screen appears which shows simplified rules, like if you press a button the door opens or when the water is empty to refill it. There will be elements of these rules that you can swap so if you can’t open a door you can make it so that when you’re denied access the door opens. The thing is it gets a lot more complicated than that. 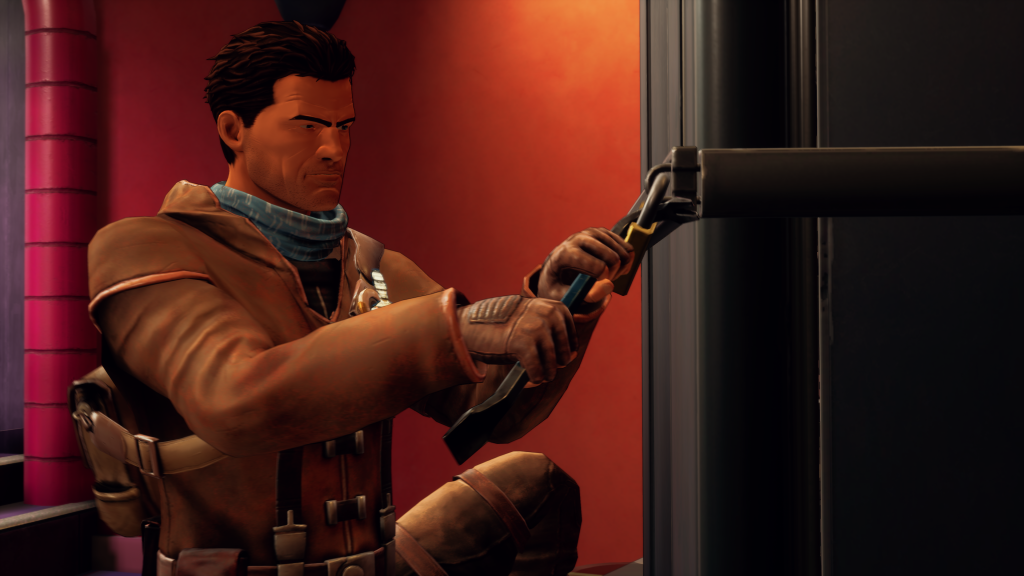 You can also hack multiple things at once, which will allow you to take rules from one machine and swap it with another. It can be quite fun taking the aggressive voice of a security robot and swapping it with the excited voice of a sales robot but the thing is these robots move around so making the connection that you need to hack these two things at the same time can be a bit of a leap. The machines you hack need to be within a certain range and quite regularly you’ll need to wait for a robot to move into range before interacting with it to swap rules with a stationary object.

It takes some getting used to but as it happens so often you do get the hang of it and adjust your thinking. If you do get too stuck there is a hint system in place which is on a cooldown so you don’t just spam it and actually try to solve things yourself. It starts off with hints but will eventually just tell you what to do which is nice as point and clicks aren’t always the most intuitive things and fans of the genre will be used to poking around unsure of what to do. There is also a trophy for not using it to incentivise trying. 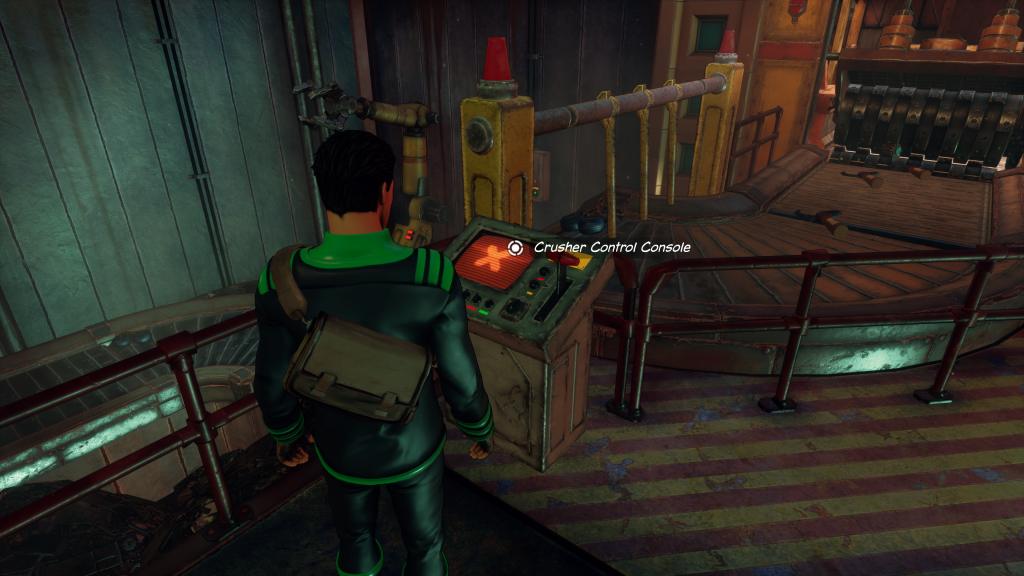 At least you can look at some quite pleasing visuals as you walk around, stuck. The environments are quite nice to look at and the major characters have solid models with a strong art style. Some of the animations are a little stiff and when loading into an area the textures will sometimes be a little late to the party but all in all I was pleasantly surprised. The acting is a little hit and miss but you do get a nice range of British accents at the very least and there’s no one so awful as to stand out.

When in a conversation with someone sometimes the camera will be in a weird place or an NPC will just wander into screen and stay there, blocking your view but otherwise I can’t complain about the presentation too much for the type of game it is. Dialogue wheels grey out conversations you’ve exhausted whilst still allowing you to access it again if you feel the need which is a nice touch. 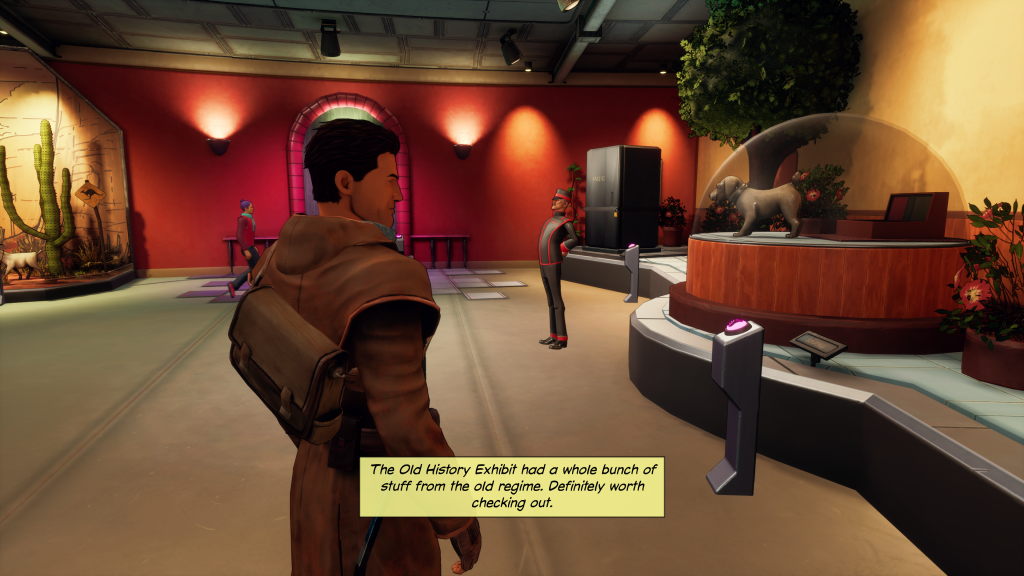 Beyond a Steel Sky takes a more comedic approach, despite the serious topic. I can’t say I ever laughed out loud but the jokes are consistent and enough to force a smile. There are a wide range of characters, both human and robot, good and bad, that make Robert’s adventure a colourful one. If you’ve played one of Revolution Software’s other titles you’ll probably have an idea.

No doubt those that played the original will get more out of it with call backs and fan service but they give enough information about what happened previously in a pretty natural way for the rest of us to follow along quite easily. There’s even a developer commentary option for extra replayability and uberfans. 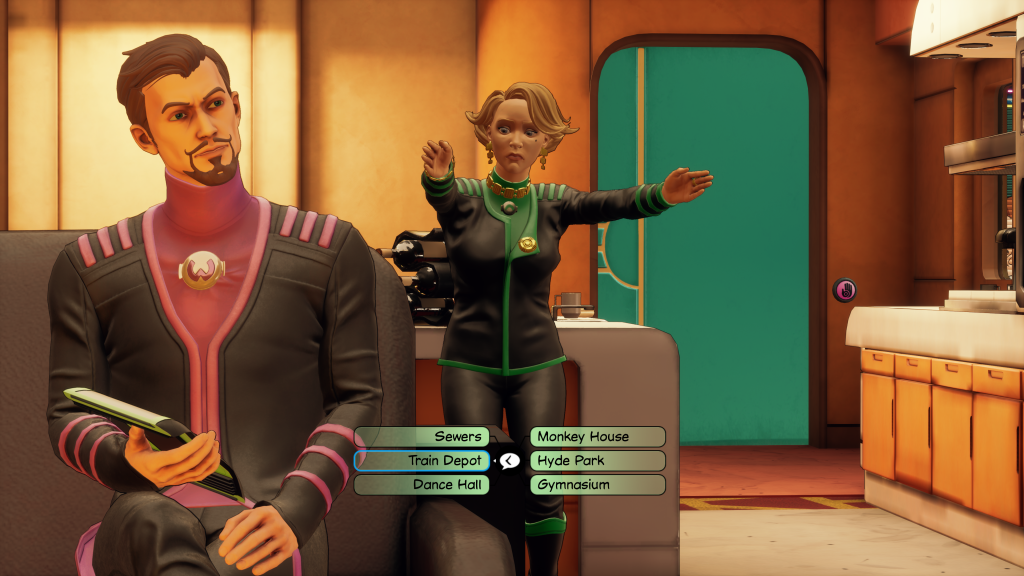 Beyond a Steel Sky is an enjoyable modern sequel to a point and click classic. Despite the updated visuals and interface it really does feel like a point and click game of old which is a big plus for fans. Fans will also be used to some of the more taxing sequences where you’re just not sure what to do to progress, whilst newcomers might struggle especially with hacking but the hint system is there as a safety net if you need it.

I’m glad I’ve played it. It’s reminded me of a genre that I had quite a fondness for and it turns out that’s still the case. I’ll be firing up Beneath a Steel Sky shortly. Maybe I’ll replay the Broken Sword games while I’m at it. Welcome back point and click, I’ve missed you.

Beyond a Steel Sky
7 Overall
Pros
+ Point and click gameplay modernised well
+ Colourful characters
+ Hint system stops you getting stuck too hard
Cons
- Hacking isn't as intuitive as the item usage
- Some acting is better than others
- Minor technical issues
Summary
Beyond a Steel Sky is a modern sequel to a classic point and click and although the mechanics and systems have been updated that original feel is still present. That's great news for fans whilst those who didn't enjoy the genre's more obscure puzzles or slower paced gameplay will find similar troubles here. Lucky for me, I'm a fan.