Truth be told, I’ve not enjoyed much from the Playstation Talents initiative. Whilst these do seem to be primarily from student developers and small indie studios, there’s always been rough around the edges and fairly ramshackle in construction. To my surprise, Twogether: Project Indigos Chapter 1 manages to deliver some much needed polish on a small budget. 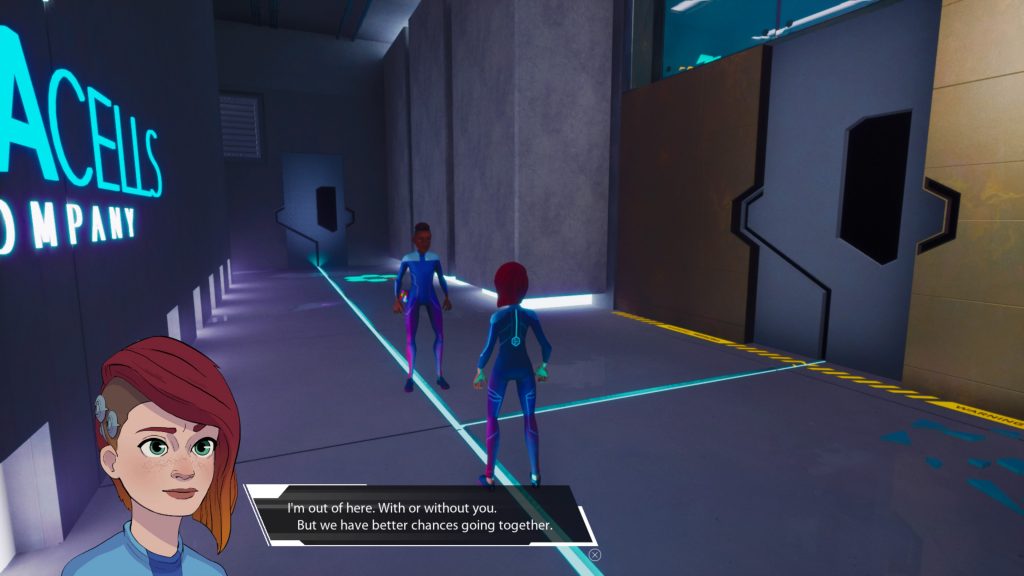 The plot revolves around two special children attempting to escape the Hexacells facility. The company have been extracting fluids from their heads in order to create their pharmaceutical products. It’s a grim premise but it’s played fairly light and plot, on the whole, is fairly slim. Rafi and Sam are our two protagonists who have to cooperate to find their way out.

The story can feel very front-loaded but the premise is intriguing enough. Being that this is the first chapter, Twogether: Project Indigos seems to be making some fairly short introductions. The playable duo appear to be the only humans in the laboratory but you do get some environmental storytelling. Projectors show adverts for Hexacells and a short intro lays down the foundations.  There’s definite allusions to a more complicated plot but it’s drip-fed.   It does lead to plenty of mystery but not a lot of closure. 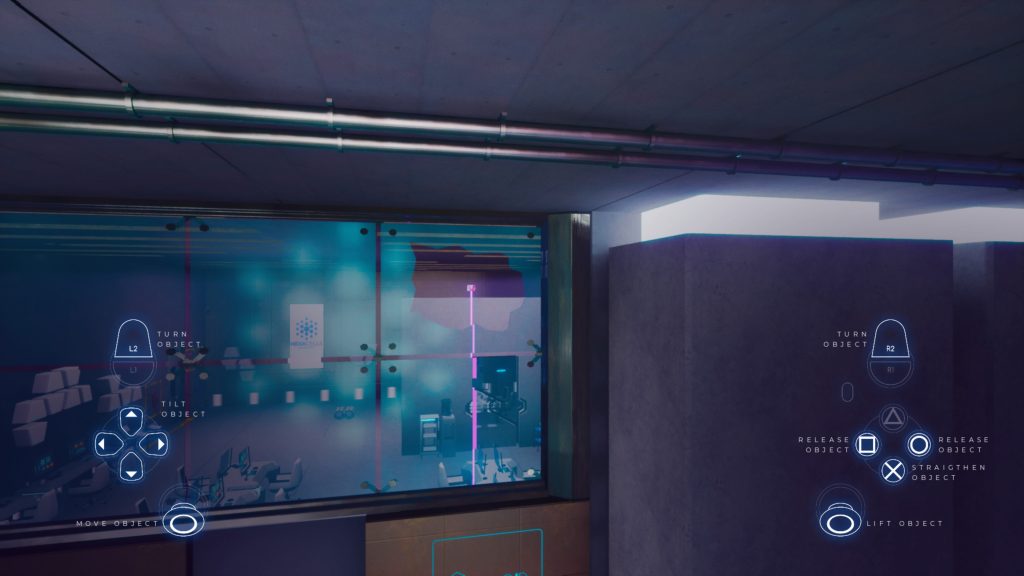 Gameplay is surprisingly strong. Rafi has a handy Rubik’s cube he can throw and teleport to. It’s a simple ability to play around with you tend to use it to get into rooms to activate switches. Sam can lift objects using telekinesis. Both of them have limited range but the puzzles make good use of their abilities. You can switch between them at any time and managing them feels pretty intuitive.

There’s maybe a dozen puzzles in total and they aren’t especially complicated. It does mean the game flows well and the simplicity is forgivable for an opening chapter. There were moments where I was stumped but the majority of the rooms are self-contained and the complexity does step up towards the end of the game.

By themselves, the abilities at your disposal are easy to grasp. Combining the two does lead to some interesting scenarios. Sam also can activate switches through her powers so knowing who needs to be where is key to progression. Puzzles will often just have the one solution so there’s maybe not many opportunities to get creative. Mechanically, it feels fairly rigid but, as an opening act, that’s not a bad thing. 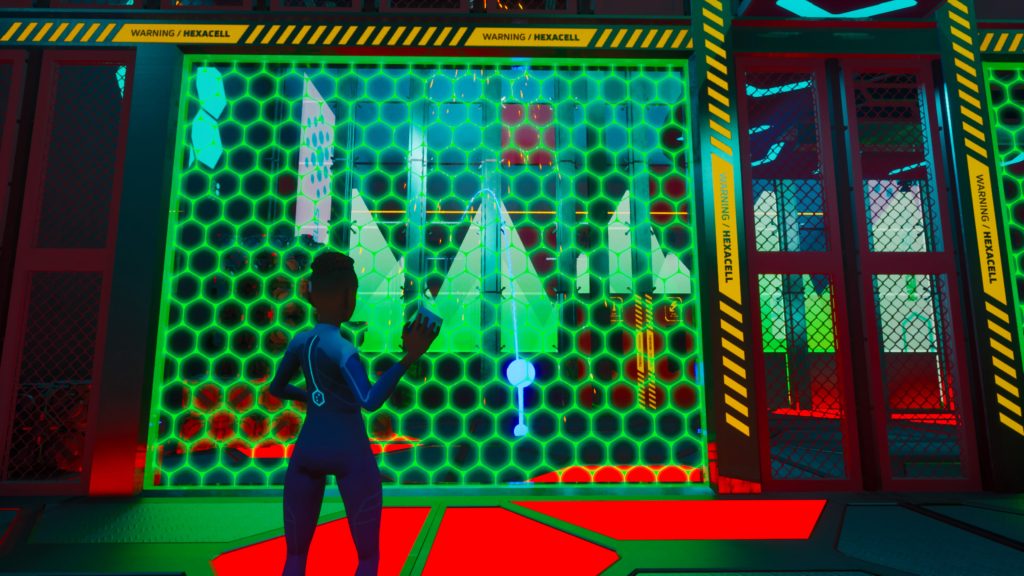 The environments look sleek. It’s abstract and occasionally sterile but I love the lab rat aesthetic. There’s a good use of colour and the metallic corridors shine with some lovely reflections. Search lights pop with a bright green and any moveable boxes are easy to recognise. For a small indie project, this seems surprisingly polished. Sam and Rafi show a good deal of personality in their sparse dialogue and I really like the utilitarian look of the facility.

I’ve been avoiding the comparison but it is Portal-esque in how segmented each room feels. You rarely have a lot of space between you and your objectives and the next problem.  It feels like a series of test chambers and the look does feel clinical and purposed.  The humour lacks a punch but there’s a definite sense Sam and Rafi are trying to figure each other out.  I’m keen to see how their interplay develops.  They feel like two strangers but we’ll see how they grow in future episodes.

Music tends to play more towards quiet ambience. When solving puzzles, you mostly have mechanical hums for company. It’s atmospheric but gives you plenty of room to focus. I barely notice it but more substantial musical cues kick in when the duo pair up between floors. It seems to fit with the moody, dark premise but doesn’t build a lot of tension. I suspect that’s hard to do when there’s no imminent threat. 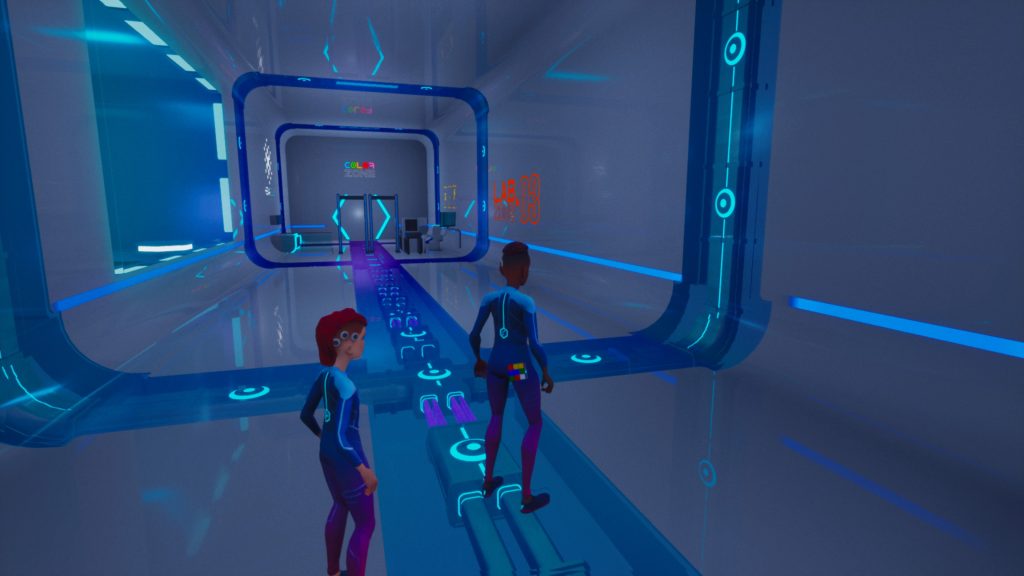 You can approach challenges at your own pace but the overall experience took me close to 2 hours.  You have two floors of obstacles to get through and not much on the sidelines to explore. It keeps the pace up as you funnel from one room to the next. Breathers do happen but they’re mainly to dish out dialogue to our two heroes. These shows a little bit of character but there’s a sense Flying Llama Studios are holding back for future chapters.  The platinum does require a second playthrough to re-solve some puzzles so that can add a touch more longevity.

As brief as it is, I’ve enjoyed it. There’s definitely a small project feel to Twogether: Project Indigos Chapter 1 but there’s a good foundation here. The aesthetic is colourful and clean and really pleasing on the eye. As slight as the narrative is, there’s an interesting premise on offer that could be built upon. It’s intriguing and, whilst the puzzles felt relatively simple, I’m eager to know where it goes from here.  As an entirely single-player effort, it works well.

Twogether:
7 Overall
Pros
+ Has an intriguing premise.
+ Features two likeable characters with complimentary abilities.
+ Simple puzzle design that does increase in complexity as you move on.
+ Has a sharp, clean look it.
Cons
- Definitely feels like an introduction with no real closure.
- Plot does take a backseat to the gameplay.
- Brief, although it does move at a good pace.
- Not much beyond trophies to add replayability.
Summary
Twogether: Project Indigos Chapter 1 is a pretty decent opening. The premise and puzzles are interesting and, despite the short play time, it has me interested in what comes next. There's a strong, clean look to the puzzle rooms that I really like. Mechanically, it's sound with two distinct characters that combine fairly well. It doesn't develop into something complicated but it does lead to an experience that flows well. It's short but I'm intrigued to see what follows.