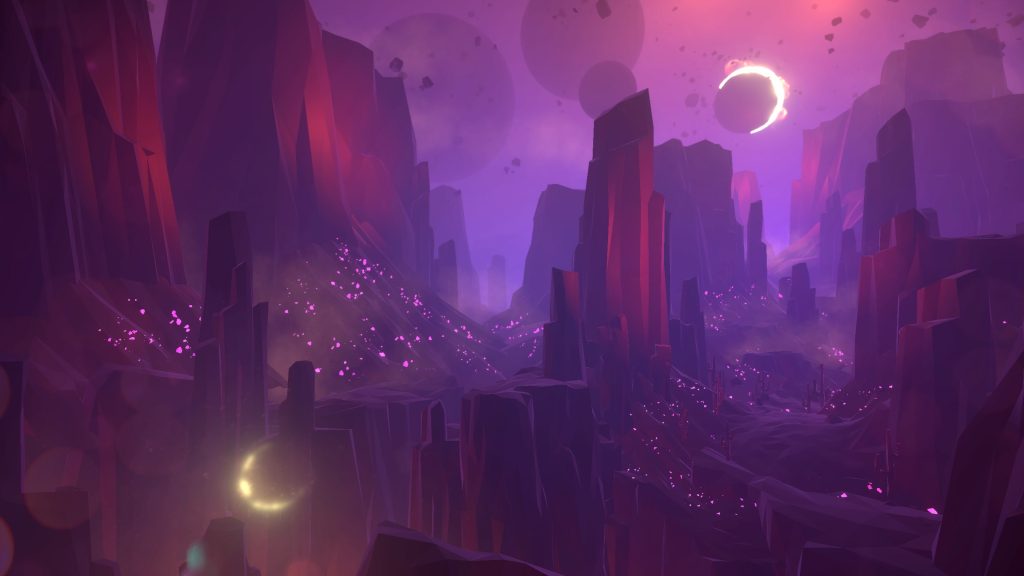 Before we get started, I feel that it is best to preface this review with a confession of sorts. While I am a lover of music, this being a passion that is second only to gaming, I must admit that my tastes have often leaned towards the nostalgic, with very little post 00’s tracks getting a look in at my Spotify library. Owing to this, I have long since missed the boat when it comes to artists such as Avicii and as a result, I wouldn’t be able to list off a greatest hits selection or say much about the discography as a whole.

Saying this however, I have always been somewhat aware of Avicii’s EDM enthused sound, a couple of years ago you couldn’t walk around a shop without hearing ‘Wake Me Up’ or ‘Waiting For Love’ for instance. It’s only with Avicii Invector, the latest rhythm action effort from Swedish developers Hello There Games that I have truly been exposed to a wider selection of the artist’s music library. Unfortunately, this exposure is the result of the passing of Tim Bergling and this game being a eulogy of sorts, originally created in collaboration with Avicii but recently preserved as a celebration for the man and his music. 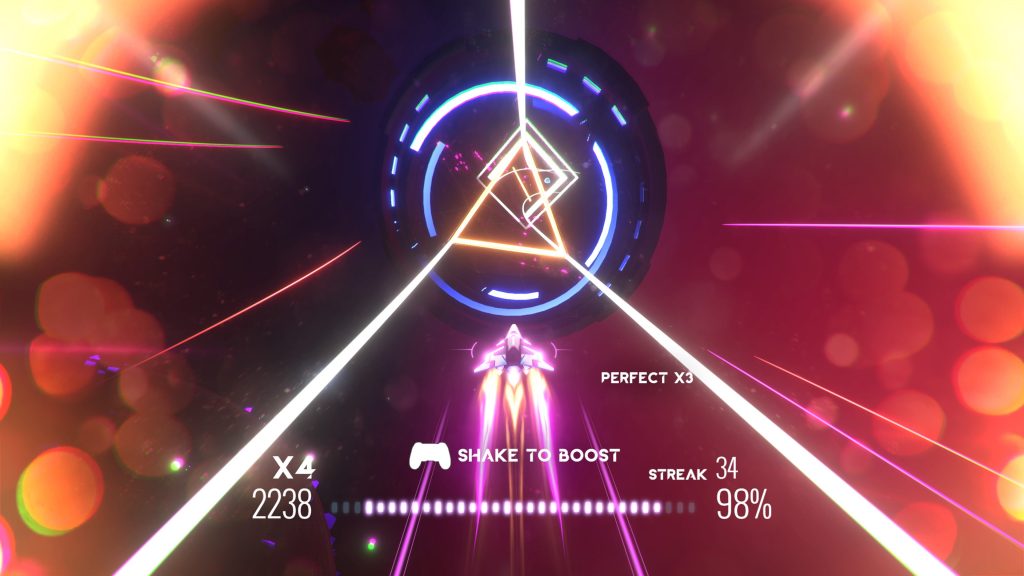 It is clearly apparent during the opening moments of Avicii Invector that this is a game that was created out of love for the musician and his output. Players are greeted with an immediate eulogy, followed by one of the most visually polished and lovingly presented games I have seen at this price bracket. There is a bright neon tint to the visuals which is pleasing to the eye and everything moves at a smooth, yet speedy pace.

The action of Avicii Invector takes place on a similar lane system to that of the Guitar Hero, Audio Surf or Amplitude games of years past. You guide a ship down a triangular tunnel, tapping a combination of face and shoulder button prompts in time with the music, rotating and chicaning through directions as you go. After multiple successful presses during certain sections you are given a boost which speeds you through a further succession of notes with a bonus point multiplier and the action gets more complex and frantic as you move up the difficulty levels from easy to hard. It’s a standard rhythm action affair if you are familiar with any of the titles, but certainly not one that is formulaic as a result. If anything, the simplicity and familiarity is something that compliments the game nicely, it’s not too complex to those who are playing casually to enjoy the experience and there is plenty of depth and skill ramp-up that will challenge hardened vets. 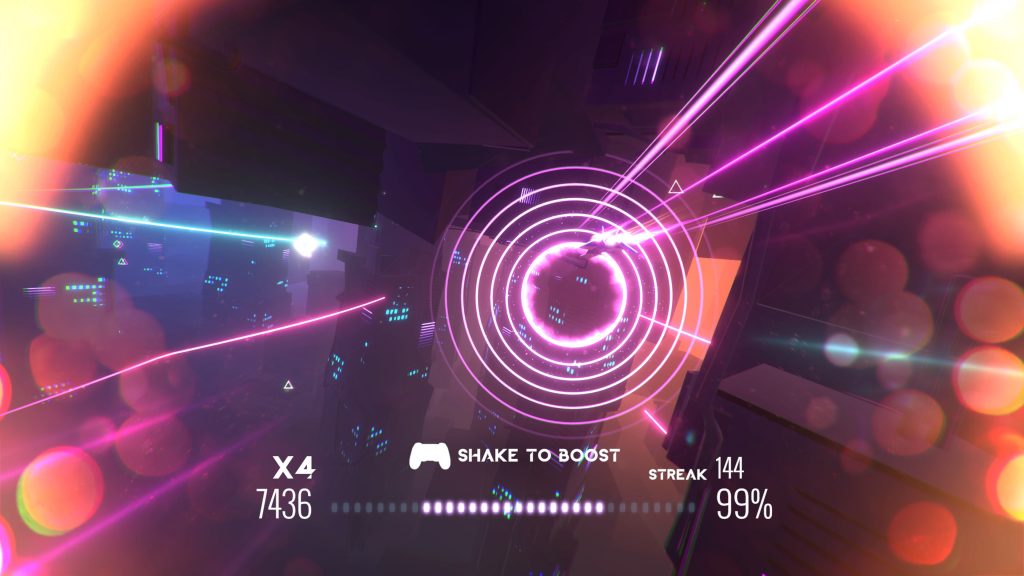 Key within this is that while there are difficulty levels with an almost chasmic difference in how chaotic the game feels between, it never feels that there is that punishing slowdown or lack of agency if you decide to play on an easier difficulty. The game follows a similar pace throughout the modes, with only the differences of notes changing or the amount of bass kicks changing. There are little to no major gaps of a song where you are not thinking about or pressing buttons to play through. This is unlike the previous, namely Guitar Hero which would have easy mode players doing so at a snail pace with only three colour prompts and an endless patience requirement needed by everyone else in the room.

As ever, the soundtrack is of major importance to a rhythm action experience and Avicii Invector is far from a disappointment. The EDM soundscape that Avicii was famous for lends itself perfectly to both the visuals and the action on screen. As previously stated, I wasn’t someone that had heard much of Avicii’s work in the past but after playing through Invector, I have since found myself with the playlist on my Spotify account. In the game there are twenty-five tracks which ramp up in complexity as you progress, and I couldn’t find one that I didn’t like, from the familiar ‘Levels’ to the pseudo gospel of ‘For a Better Day’ I had a whale of a time cutting through each song, nodding my head to the melodies and beats. Of course, mileage will vary depending on taste, but I would go as far as saying that while this game was made to portray Avicii’s music, it really does feel that the music was made for this game. 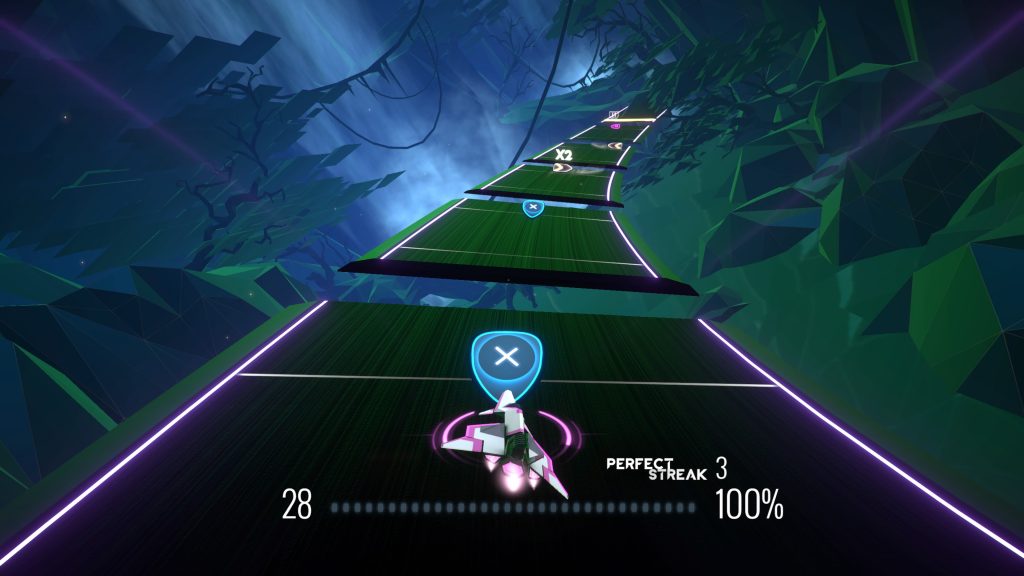 It’s worth noting that Avicii Invector is not a new experience. In 2017, this game was initially released as Invector and featured the same core gameplay and soundtrack as what we are discussing today. The game Is no longer available to purchase, but from what I can see from YouTube videos, there have been some improvements to the visual fidelity and responsiveness alongside some extra tracks that have been added. If you own the original, you may struggle to find enough new to warrant a double dip, however this will not mar the enjoyment of anyone picking up Invector for the first time. It’s a standout rhythm action game and one that is worthy of your time, even if you are not necessarily a follower of the musician at the heart of it.

Avicii Invector
9 Overall
Pros
+ Incredibly polished, Feels fast and fluid, without neutering the experience on easier difficulty modes.
+ Avicii’s EDM audio lends itself well to the neon visuals and rhythm action gameplay
+ An excellent Eulogy to the late Tim Bergling
+ Low skill ceiling required, making this a great option for all fans of the music
Cons
- Music is subjective, you may not get on with this if an all EDM soundtrack is not to your liking
- This game has the potential of being passed up and that would be a crime
- Not many notable differences from the original 2017 release
Summary
A bolt out of the blue, Avicii Invector is both a brilliant rhythm action experience and a fitting tribute to the late Tim Bergling. For the price of a greatest-hits album, Avicii Invector is a brilliant way to experience a deep cut of the discography, while also offering plenty of replay value in the form of further difficulty modes and an immensely playable experience in single or multiplayer.