After eighteen years the saga can continue – Shenmue III is here. I played both Shenmue and Shenmue II all those years ago and, having waited over half my life for a sequel, I backed the Kickstarter. Now you might think that this review is a little late to the party, but having waited so long if you thought I was going to rush through it for the sake of getting an early review out, you’re mistaken. I took it in at my own pace, taking it all in, which probably helped the game a little. That doesn’t mean I can’t see its faults however. 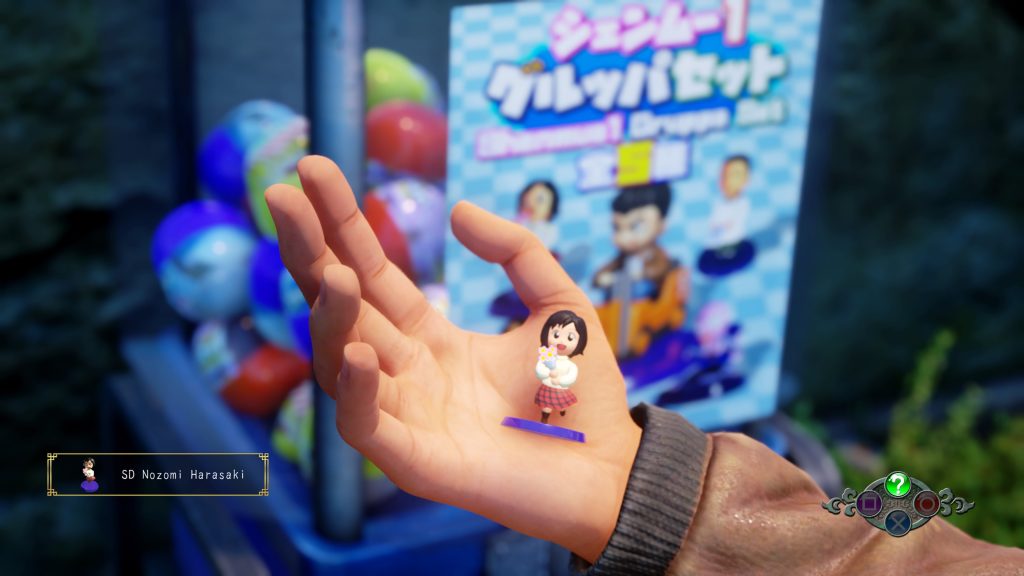 For those who don’t know, Shenmue follows the revenge quest of Ryo Hazuki. His father is killed at the very beginning of the first game by Lan Di in a martial arts battle over an ancient mirror and Ryo sets out to discover who he is, why he killed his father and what’s the deal with the mirrors. The first game took place in Ryo’s home town in Japan before he set off to Honk Kong in the second game, ending up in a cave in China. He’s been there with his new colleague Shenhua for the past eighteen years.

Shenmue III takes up straight after the second like no time has passed at all, with a very brief recap video if you want a refresher. Shenhua’s father is missing and so her and Ryo explore her home of Bailu Village to try and find clues to his whereabouts. As with the first two titles this involves primarily walking around and talking to people.

What was special about the first Shenmue was that back in 1999 it was small, but it was open world in a way. Not in a modern sense, with massive areas with towers to climb and side quests everywhere, but in that you could walk around town, talk to anyone and go into most buildings. A lot of the time you didn’t need to, but you could. You were free to do as you pleased, whether that was tackling the story or playing arcade games and collecting capsule toys all day. You could ask individuals about your current objective and they’d all have unique dialogue which might help or might not. Those same people would have their own routines, going to work or bars and catching the bus. 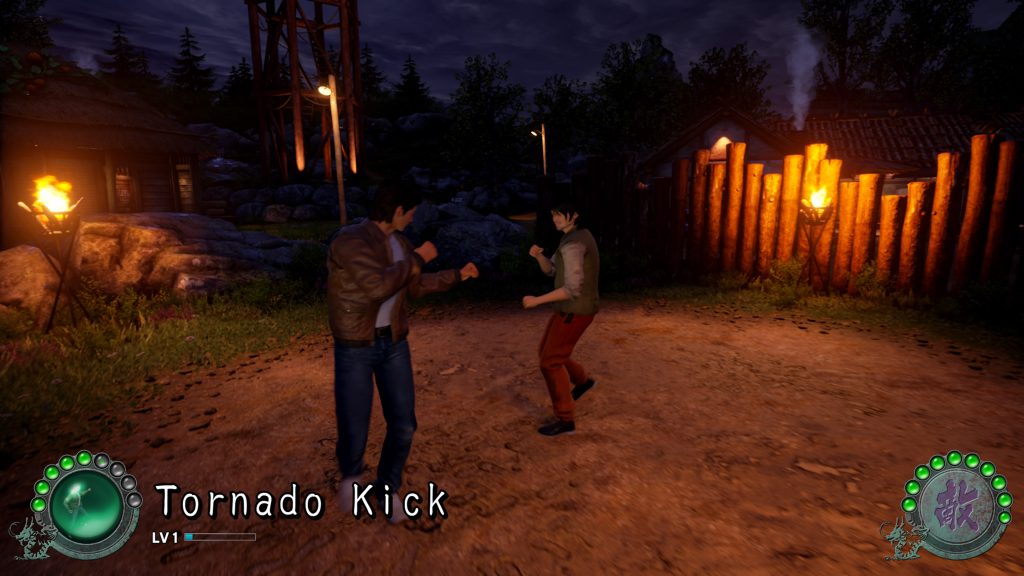 Shenmue II went bigger and lost some of that sense of community, but still had you asking locals for directions or wasting the days away doing whatever you wanted. Shenmue III has a bit of both. Bailu Village is reasonably small so you’ll recognise people doing their thing but shops are just open all the time so only certain people walk their routes each day. You move on later to a larger area where there’s more to do but you can’t really talk to the people who are wandering around or sat at cafes. It’s a crowdfunded project so corners have to be cut here and there but the illusion of a living place isn’t quite achieved.

A lot of the game is simply talking to people, or talking to one person who will send you to another, who will send you back to the previous person. There aren’t that many in all honesty but at times you will need to fight. Gone is the Virtua Fighter style battle system from the previous games which was a little clumsy but was satisfying, replaced with a lock on and more button mash style. You can block with

and each face button represents a limb, but I have to say I’m not the biggest fan of the battling.

which are welcome. Once I had a few of those I liked I was a little more tentative with my battles, waiting for an opening before unleashing my

. Shenmue III also has a little more RPG to it than in the previous games where Ryo can actually become stronger. You could train individual moves previously which would become more efficient over time but now you can spar and do different strength exercises to increase Ryo’s Attack and Endurance which contribute to his overall Kung Fu. 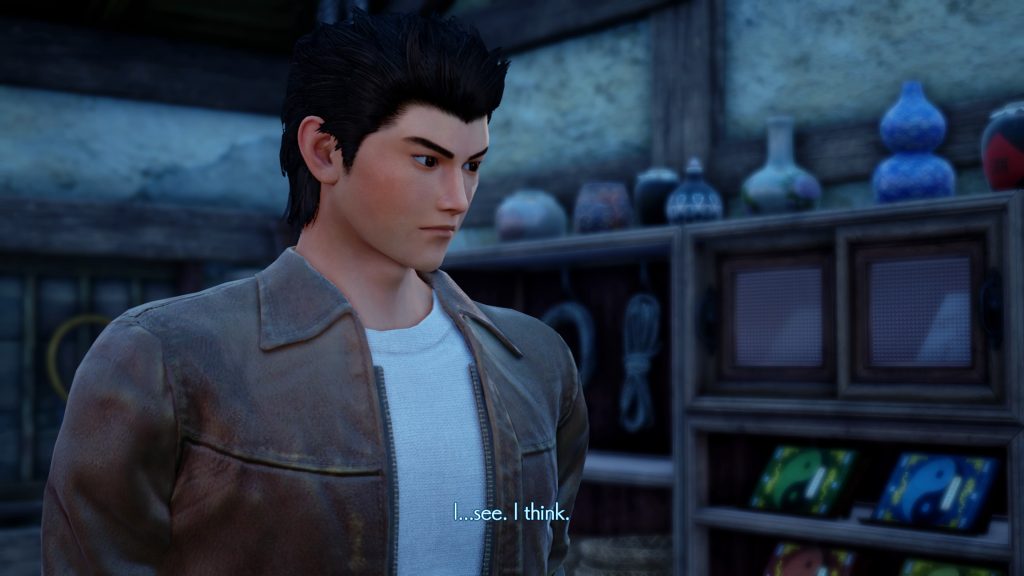 Shenmue is also credited with creating the QTE (Quick Time Event) and although they do make a return they are far less frequent than they used to be. Maybe the eighteen extra years have taken their toll but the timings feel a little tighter this time around, but the scene always just restarts and lets you try again so it’s not a big deal but also makes them feel a little pointless. There are some funny failure scenes though so I guess that’s worth it.

As far as core gameplay goes that’s it, but there is a whole lot more to do in Shenmue III if you choose to engage with it. Too much almost. You can make money with different jobs like chopping wood, you can fish which also makes you money, you can gamble in many different ways to win tokens (your gambling currency) or prizes, you can hunt for herbs to sell, collect capsule toys which you can sell or exchange for new moves and play arcade games (not actual Sega ones this time, but there are references to them in there). As I mentioned earlier you can train your martial arts in different ways. There are also missable side quests which will reward you with different items.

If you choose to just concentrate on the story then apart from training Ryo to become stronger a lot of these will be pointless, though there are a couple of parts that require a large amount of money to proceed. However if you want to collect every move in the game, dress Ryo up in different clothing or get all the trophies then there is so much stuff to distract you from finding Shenhua’s father I’m not sure she’d appreciate it. 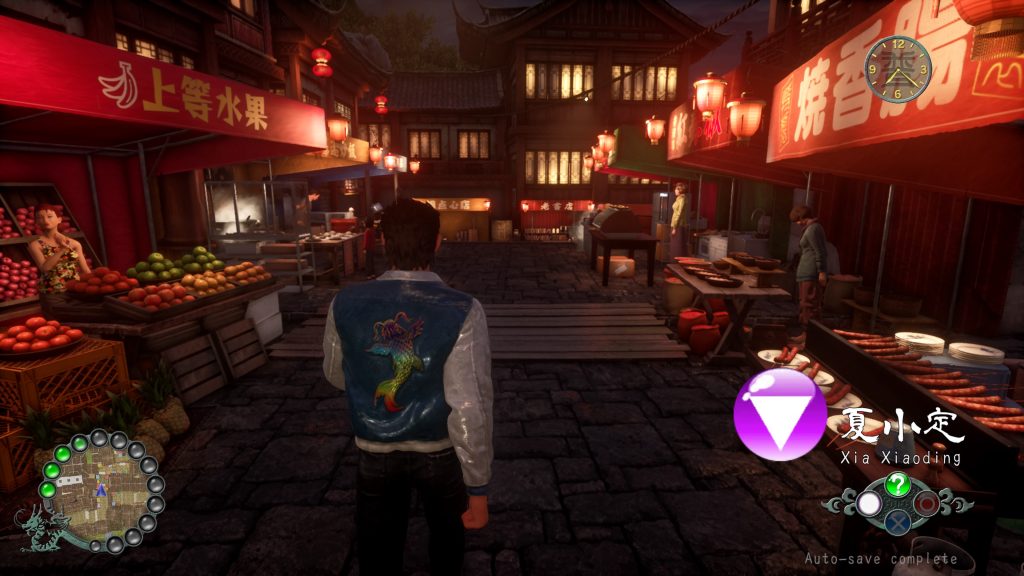 Whilst in Bailu Village I got into a routine of training first thing in the morning before going about my business for the day. As the day wound down I would do a bit of gambling at the Lucky Hit stand. If I encountered a new capsule toy machine I’d get the whole collection before moving on and keep an eye out for items that I needed to trade for move scrolls. I spent far too long scanning fields for herbs (the game does highlight them as you get close, thankfully) and defeated every optional opponent that I could. Even then I missed some stuff but there is a New Game+ so I’ve looped around to clear up what I missed first time around.

As you can probably tell I enjoyed my time with Shenmue III, but it’s far from perfect. Visually I like the style, it’s not the best looking game but it is a good adaptation of the original graphics. At times it looks to me like a CGI movie of Shenmue, but certain characters appear out of place design-wise. There is often slow down and, although you get used to it, you can see a judder every now and then which watching Digital Foundry has taught me is poor ‘frame pacing’.

Loading times are fine but the pop in of characters is very noticeable, especially in the second, larger area which can be a problem when you need to speak to someone specific. The English voice acting is incredibly similar to how it was all those years ago. Great for making it feel like Shenmue, less great for good acting and natural sounding dialogue. The addition of needing to eat to keep Ryo’s health up is also unwelcome, with it limiting your ability to run around if it drops too low. Eating isn’t such a big deal but I don’t feel it adds anything.

More of an issue is the fact that nothing really happens. I’ve been waiting all this time to continue the story and the dial has moved only the tiniest amount. I felt it the whole way through but was hoping for a climactic ending, but even that pales in comparison to the seventy man battle of the first game or making your way up the tower block in the second. You get hints of what you might have been hoping for, but really this feels like an appetiser. Lets hope for Shenmue IV and that it’s only a couple of years away and features a few more important chapters in Yu Suzuki’s saga. 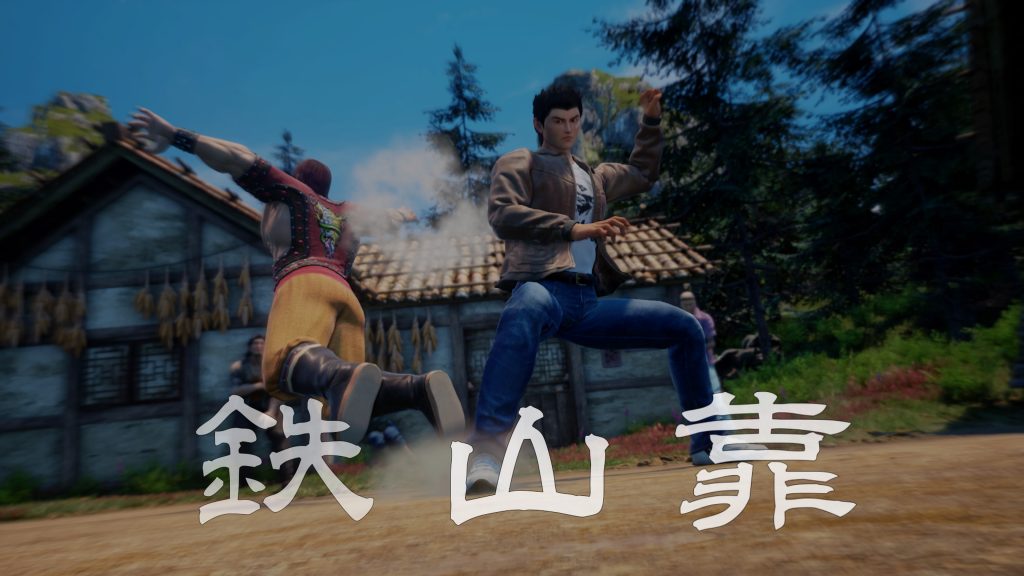 If you are a fan of Shenmue you will enjoy Shenmue III, no question. What you liked about the originals is still here, giving you the freedom to spend your days how you wish and take in the environment at your own pace. If you didn’t like Shenmue then you won’t like this as everything you disliked about the originals is still here. Although it’s good to have it back this feels like maybe the weakest of the three games so far, though time may change that. Hopefully it’s just YsNet finding their feet and and not a sign that the smaller budget limits things too much. I will continue my NG+ run and enjoy it, still feeling slightly surreal that there is a new Shenmue game, that feels like Shenmue, in the year 2019.

Shenmue III
7 Overall
Pros
+ Surprisingly authentic to the originals
+ Plenty of side stuff to distract you
+ Visuals are pleasing
Cons
- Very little story progression
- New combat is weaker than the old style
- English acting is comical at times
Summary
Shenmue III is finally here and it's a surreal experience, taking you back to the early 2000s. Fans of the series will feel right at home but its reluctance to change means it won't attract new fans. I'd have liked more plot progression than is here but hopefully this paves the way for the story to finally be finished.