Casing aside their musou sensibilities, 2016’s Attack on Titan saw Omega Force receive praise for their representation of the popular anime. Japanese developers in general have been under a great resurgence and, with that, Western audiences have become more receptive to what they have to offer. With that in mind, I’m thrust into Attack on Titan 2 as a guy fresh to the source material and intrigued to see how it plays out. 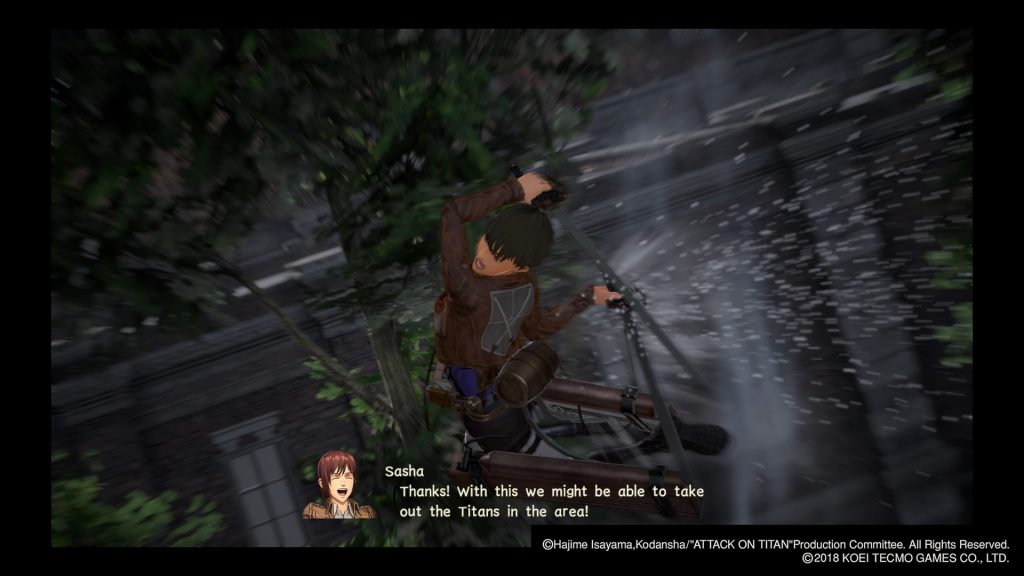 For a sequel, the story doesn’t pick up where the last game left off. A majority of the game retells the anime’s first season. As a result, some cutscenes are reused with your blank slate protagonist entering the fray. Humanity has been under threat for a century courtesy of giant foes that devour people. Our line of defence is a military split into three branches. Most of the fighters are young children who have already felt the loss of war.

Whilst this is all new to me, I’m not sure how fans will take to much of the game’s plot being retold this way. New ground does get covered but it arrives so late in proceedings that it can feel like a cop-out. Imagine picking this game up expecting a continuation of the story only to see it start again. Pacing suffers too with the game taking a few hours to really open up and, whilst it does eventually build to a satisfying climax, the game spends a little too long pulling the curtain back. 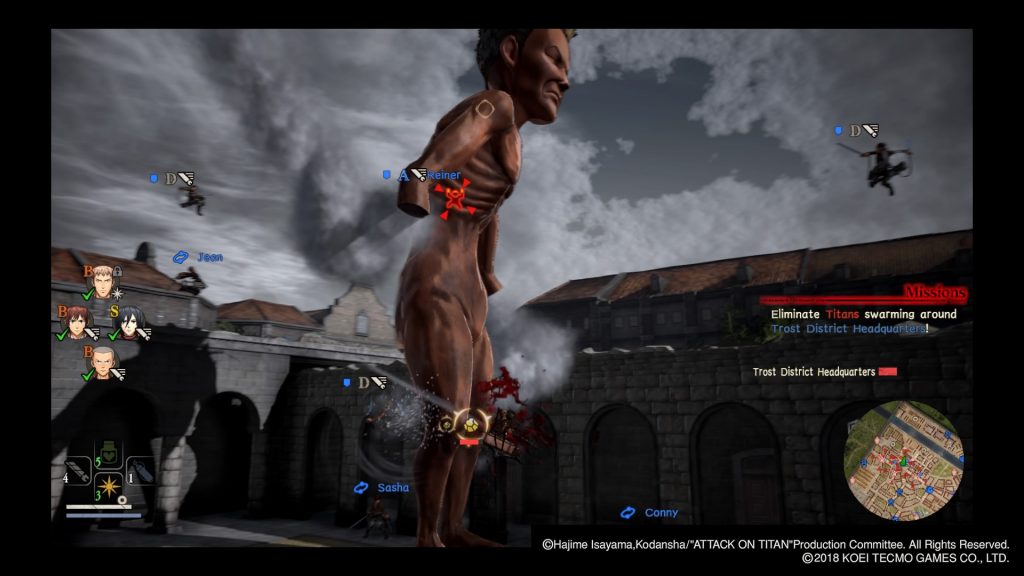 I will say it’s well presented with cutscenes retaining the visual style of the series. There’s a large cast of characters with their own individual personalities and traits and it can be quite fun to see them play off each other. There’s a lot of effort made to flesh out relationships and it can factor into gameplay with conversations leading to new skills for your character to equip.

Missions are accompanied with a bombastic orchestral overtone that heightens the drama quite well. There’s a lot of battle chatter and voicework that, in its native Japanese, doesn’t irritate. Eliminations look extravagant and meaningful. It’s a package that’s well made and a lot of effort has gone into recreating the look and feel of the source material. Fans should feel right at home. Newcomers seem welcome too, given where the game’s plot begins. It might snare a few new faces into checking the series out. 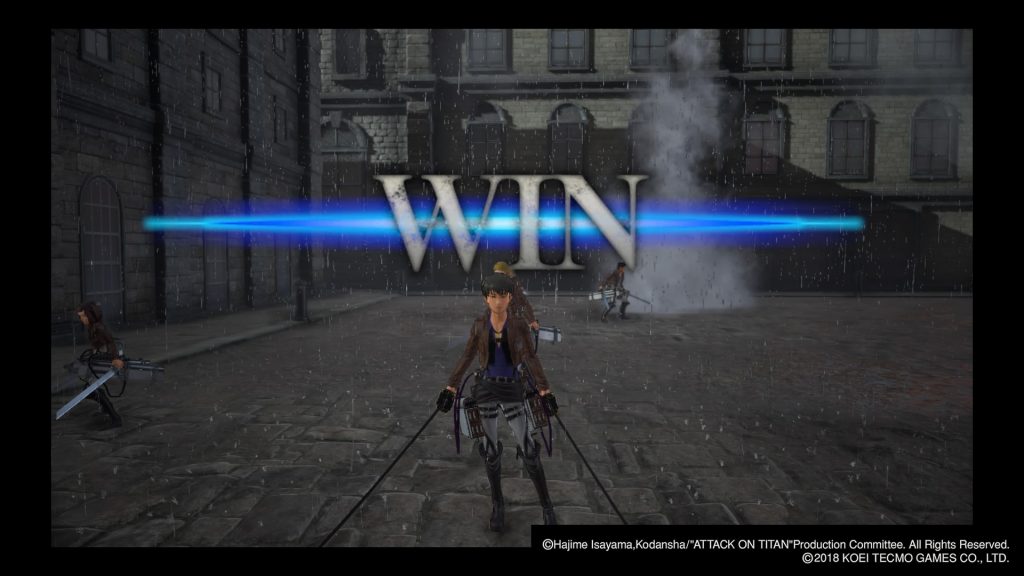 The game plays much like the first. Combat is timing based and your grappling hook ODM gear functions as your main source of traversal. You focus on titans and can then pick a limb to strike or go for the nap for a quick kill. You do a lot of this in Attack on Titan 2 and it helps that it can be as meticulous or as quick as you want it. The movement is arguably the thing that makes fighting titans more interesting. You’re almost always fighting moving targets so latching on to a body part and moving around to get the right angle can provide a challenge, especially when fighting multiple enemies. On top of that, movement is swift and uncomplicated. There’s a fast pace to combat which gives it a snappy feel.

Mission design will start to grate as missions mostly revolve around killing specific targets or escorting survivors. Having objectives spring up alongside the main missions does at least give you several things to manage. It’s not superfluous either. You are rewarded for almost everything you accomplish on and off the battlefield. There is a real loot pursuit that runs deep in Attack on Titan 2. Rewards of materials and funding all goes towards improving defences, character skills or your own personal gear. 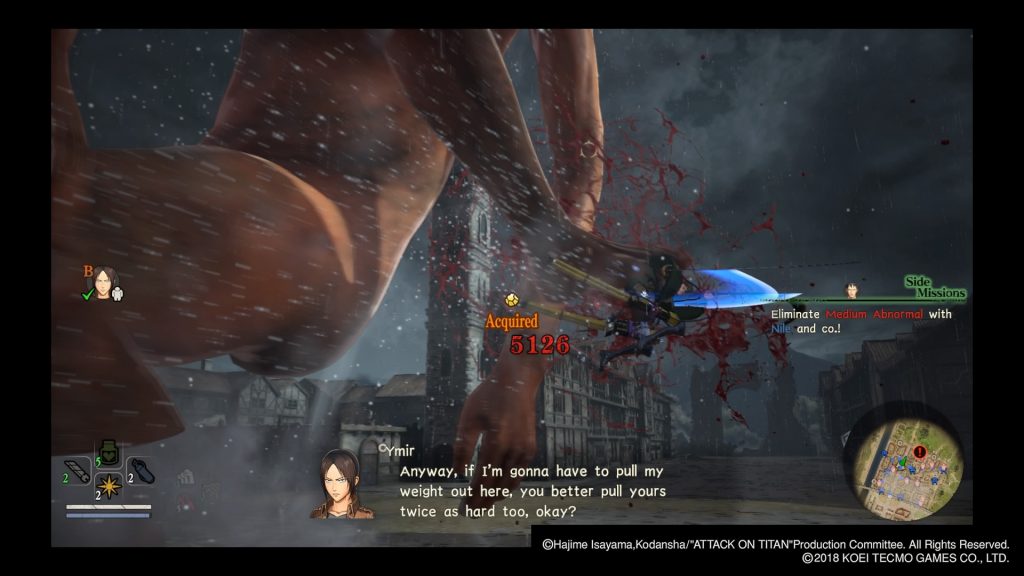 It’s a loop that’s compelling but, once I was done with the story mode, I did wonder how long I would persist with it. Inferno Mode does present sterner missions with more intimidating boss fights and Another Mode allows you to undertake missions as the anime’s cast. If you have a particular favourite, you can dive deep into that. There’s no multiplayer to speak of so any gear or rewards you gain will be solely for the purposes of self-improvement. It would be nice to show your weapons and kit to others but it’s a strictly single player experience.

Whilst I’m new to the fiction, Attack on Titan 2 does provide a considered package with a compulsive loot-driven progression. Combat is simple to grasp but your movement options manage to deliver its own style and feel. There’s a lot to work towards the presentation and the amount of content should keep players interested.

Attack on Titan 2
7 Overall
Pros
+ Faithful to the source material.
+ Compulsive loot-driven progression.
+ Combat flows well and movement feels swift.
+ Plenty of content to sink time into.
Cons
- Story mode is poorly paced.
- The narrative retreads a lot of the original.
- Mission design is a little bland.
Summary
Attack on Titan 2 maintains the pacing problems with a plot retreading the narrative of the original. Persist with this and you see game with a compelling progression and reward system. Combat and movement is satisfying even if it is let down a little by the mission structure. It builds on its predecessor gradually but there's a lot here to entice fans and newcomers.