Here’s a blast from the past. With Nordic’s slow acquisition of the THQ branding and properties, they’re looking to gain some hearts and minds. Revisiting dormant series’ can be daunting and they’re some cautious steps taken with the release of MX vs ATV All Out. Rainbow have been recalled to develop a series they know all too well and a budget price tag is attached to make the proposition as painless as possible. 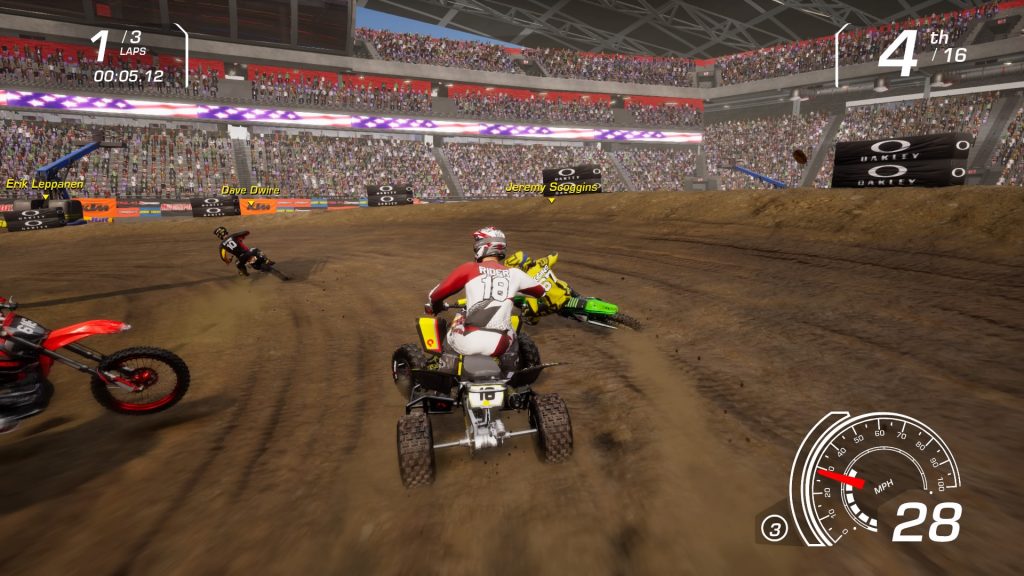 Having not seen an original entrant to the series for seven years, this iteration marks their first excursion on to current consoles. On a technical level, signs of rustiness show. Unreal Engine 4 is used to display some sharp visuals that, whilst impressive, struggle to maintain a steady framerate on the Playstation 4. I should note I played this on a base console and performance felt erratic. I’m usually pretty forgiving when it comes to such things but the way this game fails to maintain steady in motion proves really distracting and, in times of tense racing, problematic.

It really overshadows a visual treatment that handles lighting really well and manages to show off a varied, colourful landscape without seeing too much of the tell-tale pop-in of track objects. Some textures are simplified and track deformation looks cosmetic, rather than organic but the vehicles are rendered in great detail. At a standstill, the world looks quite stunning. In motion, the stuttering is a constant irritation. 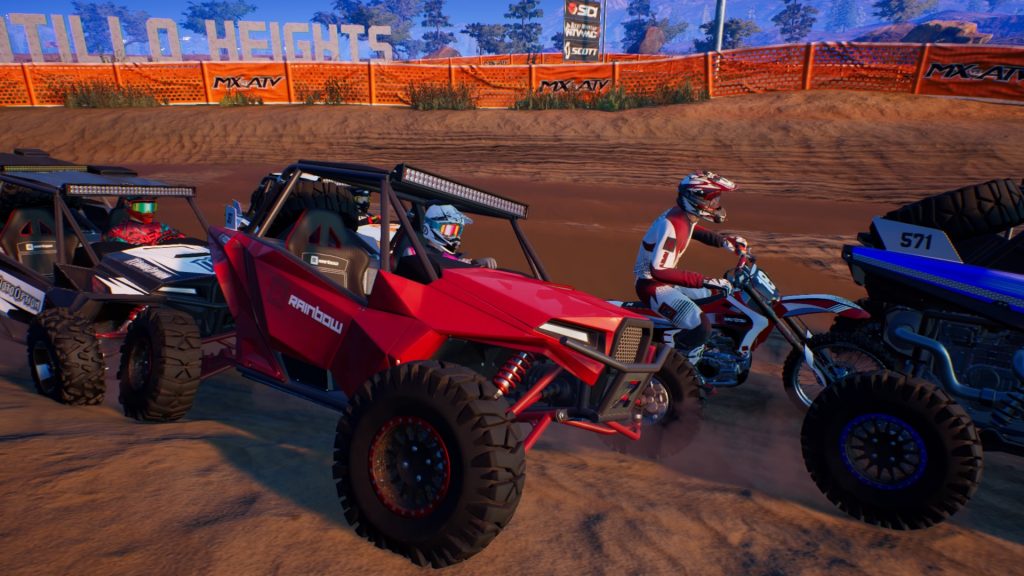 MX vs ATV: All Out does seem to tick the usual boxes for handling and mechanics. It’s forgiving but you are encouraged to lean into turns, pre-load jumps and keep your wheels close to the ground to maximise your time on the track. It’s nothing not seen in other off-road racers but the combination of feuding vehicle types still maintains a compelling hook. The selection is a little slender with bikes seeing the most attention. That said, they’re still interesting to ride with their own quirks. Setups can be tweaked but not to an intricate degree and there’s a handful of difficulty options to select. I do miss the options to alter driving aids but this really isn’t that type of game.

When you begin MX v ATV: All Out, you’re given a small hub that presents tutorials to you. It gave me the early impression this might be an open-world racer or at least a hub where you select your events. Sadly, this overworld is merely for tutorials and collectibles. Events are selected from a menu. You can select typical series events, single events, time trials and freerides. In a genre where career modes are the norm, going back to this type of progression feels almost alien. 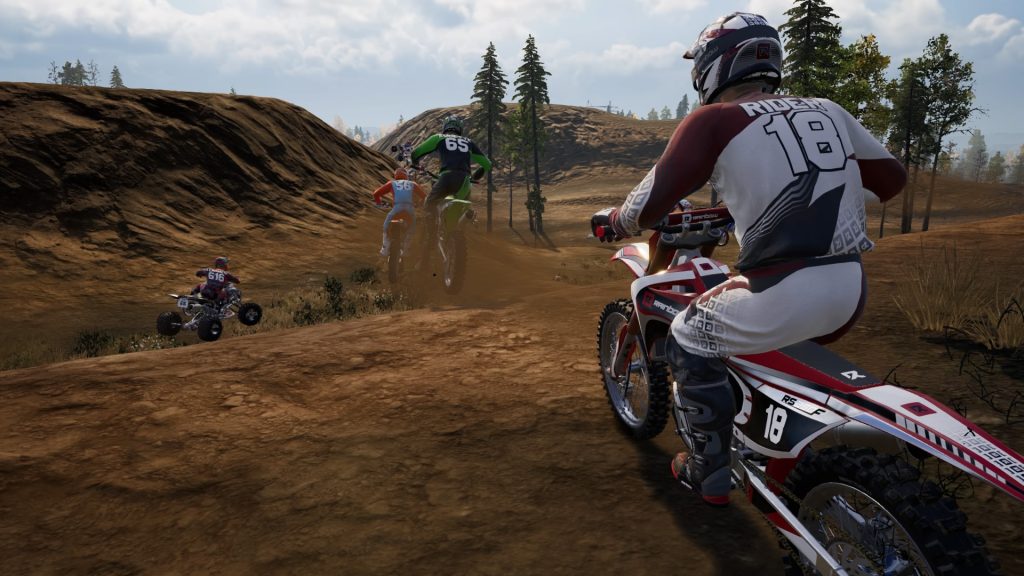 Not that there isn’t variation in the racing you do. Waypoint races encourage your ability to thrash across the wide-open country and reach checkpoints before your opponents. It’s a fun scramble and these events are usually only a couple of minutes long. Races either confine you to a single vehicle type or place you in MX, ATV and UTV menageries. When all vehicle types are hitting the track, it makes for an enjoyable spectactle. Being battered by a field of UTVs whilst you’re on a bike can add a surprising amount of challenge. Different tracks offer their own challenges with tight and twisty arena venues providing close-quarters racing. Larger outdoor venues offer the chance to put the hammer down. Stunt events allow you to let off some steam. The trick system is simple with the right shoulder button acting as a modifier whilst the right stick selects your trick. You can then throw in flips and spins if you feel brave enough.

There’s over fifteen series to work through and they quickly expand into several races in length. They begin to feel a little overbearing but you can resume them where you left off. Unfortunately, there’s no option to restart an event if you perhaps saw a last-corner shunt rob you of victory. You race for money and cups. The former goes towards buying new gear and vehicles whilst the latter gates new series’. In small doses, it seems alright but the longer championships can lose their lustre and feel a little like busywork.  The mix of machinery and locales give MX vs ATV: All Out a unique sense of character. Online works well enough with the event types all covered. There’s nothing surprising about it but it does offer the potential for some multiplayer shenanigans. 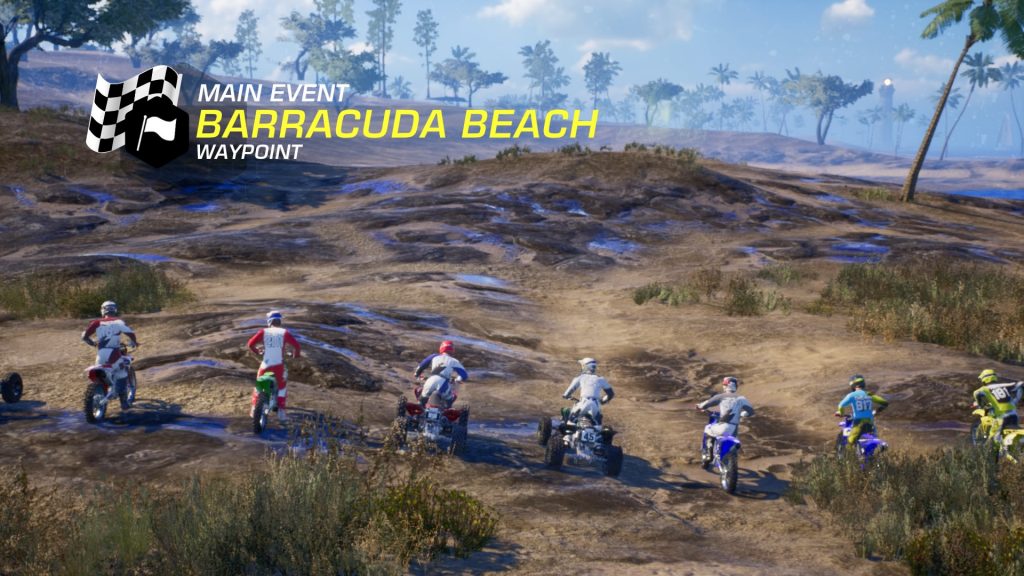 There are times where this feels like an exercise in playing to nostalgia.   When reaching the boundary of the hub world, you’re catapulted into space and the way events are presented to you feel a decade out of place.  The soundtrack manages to adhere to that. Within seconds, I heard The Offspring. The rest is your typical metal, punk and emo fare and how you respond to that is up to you. THQ Nordic have brought the brand back and, whilst it’s not exactly half-arsed, they’ve lowered the barrier to entry with a budget price appropriately. There’s enjoyment to be had with fun event types, but the technical problems provide such a caveat.

MX vs ATV: All Out
6 Overall
Pros
+ Looks visually impressive, when it's not moving.
+ The combination of vehicles make for daft racing.
+ Varied event types.
Cons
- The framerate can't hold steady on a base Playstation 4.
- The event progression feels dated.
- So does the soundtrack.
Summary
Rainbow are back in the saddle and there's signs they are a little out of practice. There's nostalgic decisions at play which don't always work out in 2018 but can still raise a smile. Modes are what you'd expect and the visuals look occasionally impressive but the game struggles to keep things steady on the PlayStation 4. The novelty of cross-vehicle madness still has hooks and races provide fantastical, open racing. Unfortunately, you'll have to overlook the ever-present performance issues.